The Grub-And-Stakers House a Haunt 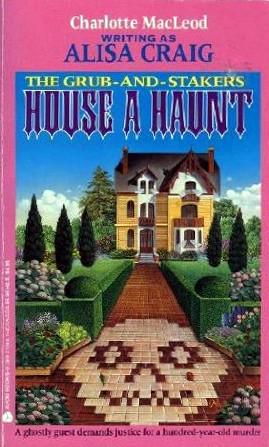 Lobelia Falls, Ontario, home of the

Grub - and - Stake Gardening and

Roving Club, has seen some odd

things, but the ghost of murdered

mule driver Hiram Jellyby is the

weirdest yet. And when he manifests

himself in the kitchen of the widow

Zilla Trott, demanding that she find

both his bones and a cache of buried

Mac Vicar’s aplomb is blown. Can

apparition and uncover the loot

without starting a gold rush? Can

the suspicious attentions of

innkeeper Hedrick Snarf ? Most enigmatic of all, why is Snarf wearing

legion of fans have a particularly

(continued on back fiap)

by Alisa Craig and Charlotte MacLeod

A Pint of Murder

A Dismal Thing to Do

*Trouble in the Brasses

The Gruband-Stakers Move a Mountain

The Gruband-Stakers Quilt a Bee

*The Gruband-Stakers Pinch a Poke

The Gruband-Stakers Spin a Yarn

The Luck Runs Out

Something the Cat Dragged In

The Curse of the Giant Hogweed

*The Corpse in Oozak’s Pond

An Owl Too Many

All rights reserved. No part of this book may be reproduced or utilized in any form or by any means, electronic or mechanical, including photocopying, recording, or by any information storage or retrieval system, without permission in writing from the Publisher. Inquiries should be addressed to Permissions Department, William Morrow and Company, Inc., 1350 Avenue of the Americas, New York, N.Y. 10019.

It is the policy of William Morrow and Company, Inc., and its imprints and affiliates, recognizing the importance of preserving what has been written, to print the books we publish on acid-free paper, and we exert our best efforts to that end.

The grub-and-stakers house a haunt / by Charlotte MacLeod writing as Alisa Craig.

Printed in the United States of America First Edition

CHAPTER
hadows were scarce in Lobelia

Falls, Ontario. Mrs. Zilla Trott might therefore have been regarded as something of a rarity, not that she couldn’t have made it into the rarity class on her own merits. Tonight, sensibly dressed for a brisk October evening in leather scuffs, heavy wool socks, a long red flannel nightgown, a pink crocheted bed jacket, and a matching cap that sat jauntily on her abundant, closecropped gray hair, she had added an old blue sweater of her late husband’s to her ensemble and stepped out into the back yard to salute the harvest moon. Her cat, Nemea, had followed dutifully at Zilla’s well-protected heels.

Their brief moonwalk completed, Nemea had followed Zilla back into the kitchen without demur, hiss, spit, or catly cuss. At the moment, Nemea was sitting on the drainboard watching Zilla put her soybeans to sprout, and Zilla was worried.

“What’s got into you tonight, Nemea? Why didn’t you stay out awhile and go helling around with the rest of the cats, eh? I hope you’re not coming down with something.”

Nemea certainly didn’t look to be ailing. She’d been named, not inappropriately, for the Nemean Lion. A fine strapping figure of a feline, she was bigger than most cats unless you counted lynxes and pumas, which even the most ardent cat lovers are often reluctant to do. Nemea’s eyes were huge and green, they bore an inscrutable glint that had cowed many dogs and not a few humans. Her fur was a rich copper-gold color with streaks of strawberry roan. Thanks to all the wheat germ and yogurt with which Zilla supplemented Nemea’s carefully balanced diet, and possibly also to the odd mouse or chipmunk she added on her own hook, the magnificent animal’s pelt fairly glistened.

She was gleaming now in the lamplight. Her eyes were bright as emeralds, her pink nose was moist, her fine stand of whiskers showed not the barest hint of a droop. Yet Nemea couldn’t fool her keen-eyed mistress. She was not a happy cat.

“I guess likely what I’d better do is make us both a nice cup of camomile tea.”

Zilla put a lot of faith in camomile; she grew her own, of course. She filled the kettle, little recking what a handsome picture she made with the lamplight picking out coppery reflections on the high-bridged nose that revealed her part Cree heritage. She put another stick in the wood stove, for the night was chill and she wanted the fire to hold over till morning. She was just setting the kettle on the front lid when she heard from behind her a rather tentative “Boo!”

People didn’t lock their doors much in Lobelia Falls, Zilla naturally assumed this must be one of the neighbor’s kids practicing up for Halloween. She whirled around, all set to fling up her hands and exclaim, “My stars and garters!”

as protocol demanded. However, her ensuing amazement was totally unfeigned.

There on her well-scrubbed linoleum stood an elderly man whom Zilla had never laid eyes on before in all her born days and could have done nicely without now. His gray mustache was even more striking than Nemea’s, but that was the only impressive thing about him. His attire could best be described as rough: his baggy dark-gray trouser legs were stuffed into scuffed old boots with dirt caked on them, his gray flannel shirt had about as much class as a worn-out mop. The dark rag tied around his neck wouldn’t have been fit to wipe out a coal bin with, and the billycock felt hat on his grizzled head was an out-and-out disgrace. Zilla’s hand snaked out and grabbed the poker from beside the stove.

“Boo yourself, you dirty old goat! What’s the big idea, barging in here unasked and scaring the daylights out of a defenseless widow? Not to mention her cat.” Nemea had her back up and her tail bushed out, she was spitting a blue streak and Zilla didn’t blame her. “You just turn around and waltz yourself out of my kitchen before I lam you one with this poker.”

“That’s a hell of a way to talk to company,” grunted the interloper. “Ain’t you even wonderin’ who I am?”

“Not particularly. You don’t look like any relative I’d care to own, that’s for sure. Unless you’re that no-good bum Aunt Jessamine got herself tied to back in nineteen forty-two. I thought you’d died of hobnail liver ages ago. I can’t remember your name.”

I’d o’ known better than to get myself roped in by any she-devil of a woman.”

“Huh! What makes you think any woman in her right mind would want you? What are you here for anyway?

There’s nothing in the house worth stealing except my family Bible and I expect that’s the last thing you’d want.

If you’re after a handout, I’ll give you some fricassee of tofu and a tumbler of buttermilk but you’ll have to eat it out in the woodshed. And you’d darn well better not smoke, or I’ll turn the hose on you.”

“Gripes, you’re a mean one, you an’ that redheaded mountain lion you got there. I been nose to nose with a chargin’ grizzly bear, an’ that bugger was some ugly! But it couldn’t hold a candle to you two.”

Even so, the man stepped forward. Zilla raised the poker. “You come one step closer, mister, and I’ll lay you out flat as a barn door.”

The gray whiskers swept upward. The old goat was grinning at her. “Go ahead, sister, hit me. I dare you.” He took the forbidden step.

Healthful diet, hard work, ample exercise, and lots of practice at the archery butts as a member of the Gruband-Stake Gardening and Roving Club had kept Zilla Trott in the finest of fettle. Her strength was as the strength of ten on account of all those bean sprouts, she whanged with will and purpose. Great, then, was Zilla’s astonishment when the stranger just stood there and took the blow.

Greater still was her dismay when the poker encountered no obstacle except her own right shin.

“Ouch! You moved, you coward.”

“Do it again,” the man offered magnanimously.

“Thrash away as much as you’ve a mind to. How ‘bout tryin’ a backhander this time? Take a good holt on my chin whiskers so’s I can’t turn my head away.”

Exasperated, Zilla made a grab for the ratty gray beard. Her hand encountered nothing. She swung the poker sideways and again hit nothing.

“Well, I’ll be gum-swizzled! What is this, anyway? Am I having a nightmare?”

Yes, Nemea knew. Suddenly, so did Zilla. “Well, dip me for a sheep! I thought ghosts were supposed to be gray and fuzzy.”

“Come to think of it, you are. Wait till I tell Minerva!

How long have you been haunting me?”

“Oh, I dunno. Us ghosts don’t pay no mind to time. I been out in the woodshed mostly, just kind o’ moochin’

around an’ gettin’ the feel of bein’ a haunt. I forgot where I was before that. Moulderin’ away in some lonesome graveyard, I s’pose. How do I look?”

“Not too bad, considering.” Zilla wasn’t exactly warming up to her unexpected visitant, but she was beginning to feel a bit embarrassed about the poker. A hostess did have certain responsibilities, after all. “I don’t suppose there’s any use offering you a cup of camomile tea?”

“Well, I s’pose you might try, though I’m not sure I got any place to put it. Go ahead an’ have yours, I’ll just hang around an’ watch. Cat gets a snort too, does she?”

“Oh, yes. Nemea likes a little cream in hers, though.

There you are, puss, don’t slop it all over the counter. And for goodness’ sake unfuzz your tail. He’s all right, whoever he is. Do you happen to remember your name, mister?”

“Seems to me it might o’ been Hector or Harvey. No, by gorry, it was Hiram! Hiram Jellyby, that was it. Funny how your memory improves once you get off the astral plane. Yup, that was me, Hiram Jellyby. I was a wagon driver by profession. Mules was my specialty. You got any openin’s for a disembodied mule skinner around here nowadays?”

“Not in Lobelia Falls, no. Offhand I can’t think where I last saw a mule team. I’m sorry, Mr. Jellyby, times change, you know. It’s mostly trucks and tractors these days, though in my humble opinion we’d do a darn sight less polluting of the environment with more animals and fewer machines. Here, sit down and make yourself comfortable.

“I’ll give ‘er a go an’ see how she works. I ain’t too up on this manifestin’ wrinkle yet.”

Zilla watched with almost motherly interest while her strange visitor endeavored to accommodate himself to the chair. At first Hiram showed a tendency to ooze down through the seat, but he gradually got the hang of it and looked quite natural sitting there with a cup of camomile tea steaming on the table in front of him. He couldn’t raise the cup, of course, but he seemed somehow able to absorb the steam. Zilla was fascinated to see the level of tea in the cup begin to subside, millimeter by millimeter.

As a former mule-team driver, Hiram Jellyby would probably have preferred strong coffee, she thought. Maybe with a plate of beans. Or a doughnut. Zilla herself wouldn’t touch a doughnut with a ten-foot pole, unless it happened to be one of Minerva Oakes’s. Minerva made the best doughnuts in town, perhaps she’d be willing to donate one or two in the interests of psychical research.

Zilla wondered why she didn’t feel more peculiar sitting here drinking tea with a ghost, particularly with the ectoplasm of somebody she’d never met in the flesh, and more particularly in her nightgown. Not that she wasn’t decently covered, though she did hope none of her neighbors would notice the light still on in her kitchen and take a notion to drop by for a chat.