Duncan and Meg Gowdy, proprietors of the village pub, parents of Violet

Constable Harmon, from nearby Craven Arms 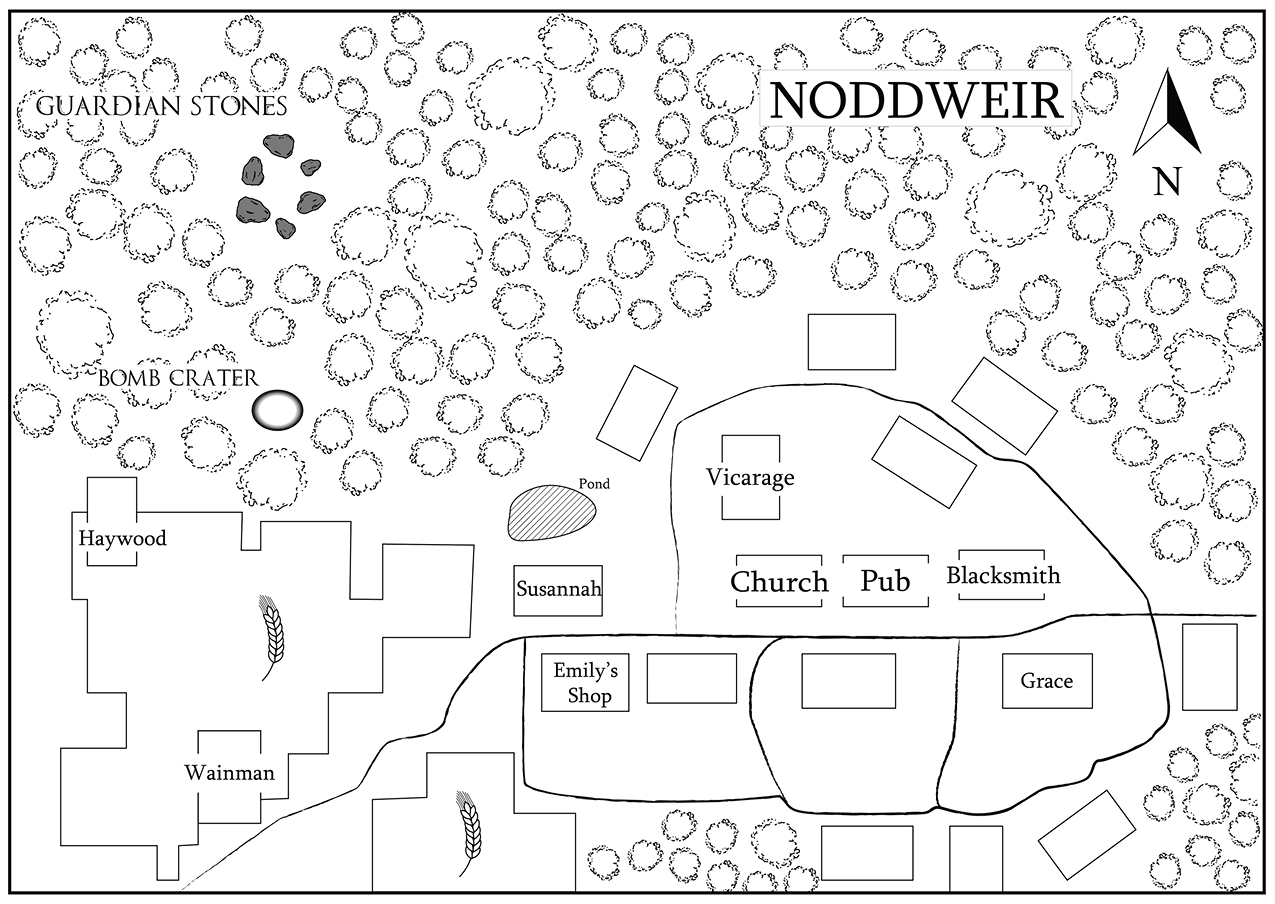 “Don't look behind you, said Death, but we're being followed.” The stout, elderly woman sounded breathless as she labored up the forest slope, her walking stick repeatedly searching for purchase in the thick ferns.

“What do you mean, Miss Miller?” Edwin Carpenter, twenty years her junior and considerably thinner, was more winded. He stopped and the thick lenses of his eyeglasses steamed up instantly in the humid air. He polished them slowly with his handkerchief, giving himself a moment to rest.

“It's just a local saying, Professor Carpenter, but in fact, we are being followed.” Emily waved her stick toward a gap in the trees where a flash of red moved below. “That's Grace Baxter's jacket.” She thrust her stick back into the ferns and resumed climbing.

“Oh.” Edwin gasped. He wanted to tell her to call him Edwin rather than professor but he couldn't find the breath. It was all he could do to force himself to follow. He feared falling as he waded through knee-high ferns, stumbling over hidden rocks and roots. He never realized how dark a forest could be even in daytime, and it was fast approaching dusk. A big brown mongrel trotted along behind his mistress, tongue lolling and tail wagging, delighted with the game.

Unfortunately it wasn't a game. Nearly every adult in Noddweir had spread out through the forest covering the mountains around the village seeking the missing girl. Shouts back and forth in the distance, the sound almost swallowed by surrounding trees, marked their progress.

Edwin started to regret he'd volunteered to help. Maybe he should have stayed back at the house and unpacked, after all. As the younger and more able-bodied searchers vanished into the trees, Edwin found himself left behind with Emily Miller, the village shopkeeper.

He barely avoided being left behind by her until, through the trees ahead, he finally glimpsed the crown of what locals called Guardians Hill. He had seen the hill earlier as he approached the village along the dirt road leading into the valley. A wooded knob, bald on top, rose above Noddweir, solitary as if abandoned when its fellow mountains retreated across the Welsh border. He grabbed at branches to keep upright and struggled the last few yards to where the trees ended.

Edwin had come to southwest Shropshire to study the circle of standing stones at this very place. He never expected his first visit to be under such circumstances.

Entering a clearing of limestone outcroppings and gorse, he was surprised to see a man and a young woman in a red jacket waiting at the summit. There was obviously more than one path up the hill and Edwin's guide, he thought ruefully, took him the long way around.

The man accompanying Grace Baxter was in his mid-twenties, bulky but soft. He stared suspiciously at Edwin, who was naturally a stranger to him, having arrived in the village only hours before.

“We know each other,” Grace told the man. “We met, briefly, before I had to rush off. Professor Carpenter's my new lodger.” She looked Edwin up and down, narrowing her eyes. “You really should have stayed at the house and rested.”

“Just as I told you. A perfect view of the village from here, Professor,” Emily panted. “In the daytime, at least.”

“That's as may be,” said the young man, “but we've no time to chat. Right now we have a missing child to find.”

Emily planted her stick in the ground and leaned on it. “Issy Chapman's always causing trouble, she is. What makes you think she's come to grief, Constable?”

Edwin thought she put undo emphasis on the word “constable.”

“There's a war on, you know,” huffed the young man. He, too, had caught the sarcasm.

Emily flapped her free hand at him. “Oh, do tell! I may be old but I'm not deaf, Tom Green. I hears them devil's flies coming over during the night well enough, likely before anyone else, half the time. And not only am I not deaf, I'm not blind either. She's been up to no good, you'll see. Not to mention a great strapping girl like Issy can look after herself. What's the war got to do with a girl gone missing anyway?”

Edwin saw Green glance surreptitiously at Grace as he concluded his speech. He guessed the boy had never experienced anything more unthinkable than a hazing at a private school.

Grace ignored him. She was concerned for Emily. “You're pale. You know you shouldn't over-exert yourself. I wish you'd take more care.”

“Nonsense, Grace! I can walk the legs off anybody you care to name. And since the constable insists, I shall carry on searching for that idiot girl. Come, Patch.”

She hobbled off toward the opposite side of the clearing and her brown mongrel followed.

Edwin wondered if he should follow as well. He preferred to catch his breath. He couldn't say how many villagers Emily could walk the legs off, but she could certainly walk off his. “Miss Miller seemed to think it would be helpful to look around from up here. Take advantage of the height.”

“Can't imagine why,” said Green. “The whole place has already been searched. And it's too dark to see much down there. Blackout conditions have to be observed. She must be at least eighty. Dotty, you know.”

“And liable to fall in the dark,” Grace told him. “You'd better follow her, Constable Green.” Her tone struck Edwin as unduly sharp.

Green's frown clearly indicated he would rather leave Emily to her own devices. Nevertheless, he left as asked, limping slightly. Green soon vanished through an opening in a welter of blackberry bushes that were fast becoming a featureless wall of darkness.

“Was he bothering you?” Edwin asked.

Grace studied him. “Ah, you heard us just before you arrived up here, then? You have sharp ears.”

“Not at all. I simplyâ¦wellâ¦”

“Don't worry about Tom Green. He's our Special Constable. He was assigned here after our regular constable joined up. Still getting his feet under him.”

“I see.” Looking around, Edwin took in the ancient standing stones.”So these are the famous Guardian Stones.”

A rough circle of large lichen-covered stones stood in front of them, most half-hidden by encroaching blackberries and gorse. Foxgloves, a few in bloom, filled the center of the circle. A sapling leaned over one of the larger stones.

Another couple of decades and the Guardians would be completely overrun and hidden, unless someone took the trouble to clear away the brush.

“You'll be able to see them better in the light,” Grace replied. “We need to be getting on. I wonder where the girl can be. I don'tâ”

She was interrupted by a burst of barking and a hoarse shout. “Quick! By the crater! We found her!”

“Crater?” Edwin managed to gasp as they scrambled down the path taken by Emily and Green moments before. “In this valley? Surely you're too far off the beaten track to attract the Luftwaffe?”

“It's the only bomb that's ever been dropped round here. The pilot likely got off course. We hear them going over occasionally on the way to Wales.”

They came to the crater where searchers had begun to gather. Grace stood on the lip, staring downwards. The sides of the hole were still raw earth. Below, just visible in the fading light, a crumpled figure lay on its back, half in a pool of muddy water. Patch pranced back and forth, barking and flailing the air with his tail.

Green slid down into the crater to bend over the prone figure.

The boy leapt up with a shout and flung a handful of mud into the constable's face. “Fooled yer there, copper!”

“Mike Finch, you little bugger!” Green lunged clumsily toward the lad who scrambled out of his reach and up the opposite side of the depression.

“It's one of the evacuee children,” Grace said. “Always causing trouble.”