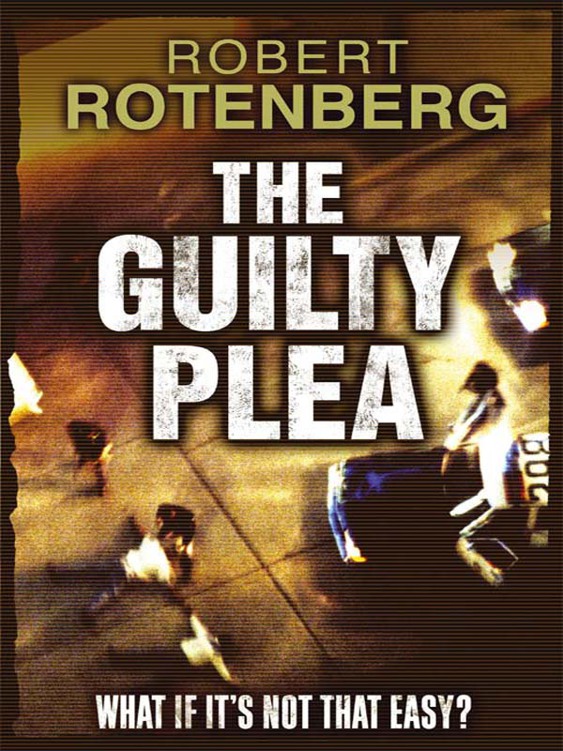 First published in Great Britain in 2011 by John Murray (Publishers)
An Hachette UK Company
© Robert Rotenberg 2011
The right of Robert Rotenberg to be identified as the Author of the Work has been asserted by him in accordance with the Copyright, Designs and Patents Act 1988.
All rights reserved. No part of this publication may be reproduced, stored in a retrieval system, or transmitted, in any form or by any means without the prior written permission of the publisher.
All characters in this publication are fictitious and any resemblance to real persons, living or dead is purely coincidental.
A CIP catalogue record for this title is available from the British Library
ISBN: 978-1-84854-348-5
John Murray (Publishers)
338 Euston Road
London NW1 3BH
www.johnmurray.co.uk
For my parents
Gertrude Rotenberg, December 21, 1921–October 19, 1999
Dr. Cyril Rotenberg, March 9, 1920–April 10, 2009
who always believed in me

Despite all the rules and objections and soft illusion of decorum, a trial was after all a savage and primitive battle for survival itself.

—Robert Traver,
Anatomy of a Murder
PART ONE
AUGUST
1

Even for Arceli Ocaya, it was too hot to sleep. The heat wave had gripped the city for days and by six in the morning her tiny apartment was already steaming. Back home in Manila, her husband and their five children would never believe it could be so warm in Canada. By next summer when she brought them over, Ocaya planned to have a bigger place, and she knew they would never understand what it had been like—all these years alone with the summer heat, the winter cold, and the eternal loneliness.

It was good that she was up early. Her employer, Mr. Terrance Wyler, would need all the help she could give him this morning. Poor man. Even though he was rich.

The bus she took every day to the subway arrived on time, but there was a delay on Eglinton Avenue where a film crew was making a movie. This happened so many times in Toronto. The trailers parked on the side of the road funneled the traffic. Ocaya saw a stone building with a new sign that said
CIRCUIT COURT—BALTIMORE
and police cars with the words
BALTIMORE CITY POLICE
on the side.

Unfortunately, most people on the subway were reading the transit newspaper, which had a picture of Mr. Wyler right on the front page with his arm around his famous American girlfriend, the actress April Goodling. The headline read divorce from hell trial starts today. Why do they write such terrible things? Ocaya wondered. Her employer was the nicest person she’d worked for since leaving the Philippines.

At her last subway stop, Bayview Avenue, she rushed up the escalator. Oh, no, she thought when she got to street level and saw the back
of the bus pull away, its tailpipe spitting out sooty black smoke. She decided to walk the six blocks to his house.

Marching up Hillside Drive, Ocaya couldn’t stop thinking about that foolish headline. “Divorce from Hell.” Try being separated from your family for six years and only getting to go home to see them once. That was hell. This divorce was silliness. Mr. Wyler was an excellent father and those accusations his wife, Samantha, made against him last year were nonsense.

After three blocks she felt the sweat collect on the back of her neck. The lawns of all the expensive houses were turning brown at the edges from the long dry spell and most of the driveways were empty. For the next three blocks the street climbed at a steeper grade, but she refused to slacken her pace.

Ocaya had learned that in Toronto during the month of August many people were on holiday, especially the wealthy ones. They called it “going up north.” When Mr. Wyler’s son, Simon, was just a baby—and Mr. Wyler and Samantha were still married—the family went up north to a cottage and Ocaya went with them. Why they would leave their air-conditioned home to spend a week in a woodshed with an old refrigerator, a place with bugs and snakes outside, was a mystery to her. Strangest of all, one afternoon they caught seven fish and insisted on throwing them all back in the lake.

She arrived every day by seven-thirty. Mr. Wyler was always up, his stereo on loud, prancing around the kitchen, chopping up fresh fruit. Sometimes he played his piano. On the weeks he had Simon, he would make breakfast while listening to a man named Billy Joel. Apparently Mr. Joel played piano too. Her employer even named his dog Billy.

Simon had just turned four years old and was already learning to read. Short words, but Mr. Wyler was so proud. A few weeks earlier he bought some colorful magnetic letters and put them on the front of his refrigerator. Each night he spelled a short word and when Simon came down for breakfast the boy would read it. First D-O-G, then C-A-T, then H-O-U-S-E, then T-R-A-I-N.

As she climbed the stone steps to the front door, Ocaya was surprised to see that the newspaper was still there. Usually Mr. Wyler had read it by the time she arrived, and he often showed her an article he thought would interest her. This morning, with so much on his mind, he probably didn’t have time. She scooped the paper up and put her
key in the door. It was unlocked. Mr. Wyler had probably been outside earlier, before the paper came, and forgotten.

I’ll bet the poor man couldn’t sleep, she thought. His parents and two older brothers had been at the house last night for Sunday-night dinner, and Ocaya had been there to help out. The family had fought about their business. That, on top of the trial starting today, must have upset him.

It was quiet inside the house. There was no music playing. No clatter of dishes in the kitchen. No patter of Simon’s little feet. And where was Billy? Every morning when the dog heard Ocaya come in, he would bark with happiness, stand up on his back legs to greet her.

The house was hot. Mr. Wyler often forgot to put on the air-conditioning before he went to sleep, especially lately when he was so upset. She took off her backpack and slid it under the front hall desk. At last she heard the click of dog tags on Billy’s collar. He poked his head around the corner of the living room.

“Billy, my favorite little doggie.” She clapped her hands together. “Where’s Simon?”

Saying “Simon” always brought an instant response from the dog, but Billy seemed uninterested. He lowered his head. Must be the heat, Ocaya thought.

“I better get you some water.” She swung open the kitchen door but the dog was reluctant to follow.

The first thing that hit her was the smell. Something strong. Horrible.

She saw the blood. A dark red splotch on the clean white tile floor. She would use one of the rags under the sink to wipe it up, she thought.

Then she saw Mr. Wyler.

He was lying on the floor near the refrigerator. His eyes were open. Vacant. She ran to him. “Did you fall, sir?”

There were cuts across his white shirt, the one she’d ironed for him on Friday. So many cuts. On his neck too. And the blood. All the blood.

Her heart was pounding. She was having trouble breathing. Thinking.

Wait, she thought, hearing the silence of the house.

“Simon,” she shrieked, louder than she thought she knew how to yell. And raced to the stairs.

For some reason known only to him, every summer Homicide Detective Ari Greene’s father insisted on repainting the railing on the front steps of his house. One of these years I’m going to scrape the damn things down, Greene thought as he grabbed two thin vertical bars and yanked them back and forth to make sure they were secure. The railing wobbled a bit. He’d need to fill in the cement too.

Even this early in the morning it was hot and the heat accumulated on the concrete steps. His dad had made Greene a fresh pot of tea and was drinking his usual instant coffee from an old Toronto Maple Leafs mug.

Greene laid out the morning’s newspaper under the railing and opened a can of black paint with a screwdriver. The can had lasted two summers already. “I think there’s enough for one more year,” he said.

His father reached in with a long stir stick. “Let’s hope.”

Greene had just picked up a brush when the emergency beeper on his hip went off. He hadn’t expected a call today, because he was number four on the handwritten list posted in the bureau of who was in line for the next murder. He picked up his cell phone and called in.

“Toronto’s turning into Murder City,” the dispatcher said. Her name was Denise, a tough old battle-ax Greene had known for years. “This is the fourth of the night.”

“Must be the heat,” Greene said.

“It’s not the heat, it’s the humidity.” Denise couldn’t wait to fill him in on the details of the three other homicides. In the Jane-Finch corridor, shots were fired and a seven-year-old girl at a backyard birthday party was hit by a stray bullet. Downtown in the entertainment district, a med student up from Buffalo got stabbed when he jumped in to break
up a fight. And a home invader out in Etobicoke beat a babysitter to death when she wouldn’t open the family safe.

“What’ve I got?” Greene asked Denise.

His father took the paint can lid and tapped it back into place with the back of his brush. Greene had been on the homicide squad for five years and they both knew the drill. When a murder call came in, he dropped everything else in his life.

“You heard of Terrance Wyler, from the Wyler Foods grocery store?” Denise asked. “The guy who’s going out with April Goodling, the Hollywood star. She goes through men like water. Wyler’s divorce trial was supposed to start today.”

Scandal in the Night by Elizabeth Essex
The Soul Of A Butterfly by Muhammad Ali With Hana Yasmeen Ali
Fierce Dawn by Scott, Amber
Stand by Becky Johnson
An African Affair by Nina Darnton
The Wedding Countdown by Ruth Saberton
The Brotherhood by Stephen Knight
Passing On by Penelope Lively
The Old Axolotl: Hardware Dreams by Jacek Dukaj
Warp World by Kristene Perron, Joshua Simpson
Our partner