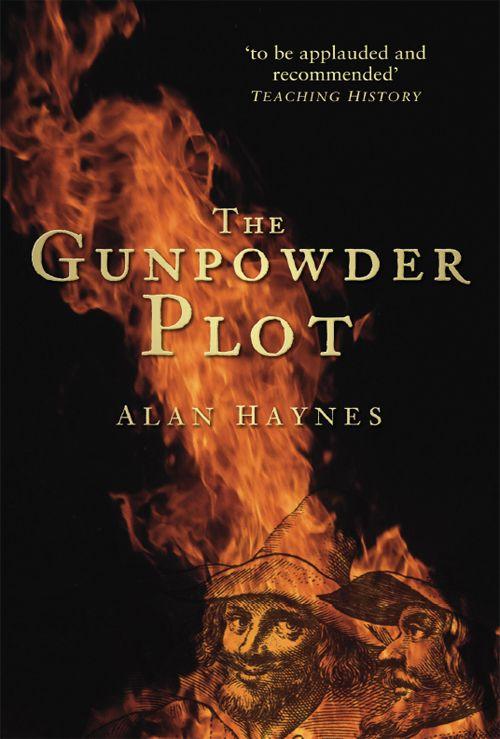 In loving memory of my parents Eve and William Haynes

This edition published in 2010

This ebook edition first published in 2011

The right of Alan Haynes, to be identified as the Author of this work has been asserted in accordance with the Copyrights, Designs and Patents Act 1988.

1
The Politics of Salvation

4
The Gentlemen of the Sword

5
The Hand of Providence

12
Postlude: The Plot, the Playwright and the Poets

Appendix I
The Gunpowder Commemorative Painting

Appendix II
The Swords of the Gentlemen

God forbid that we should give

out a dream of our own imagination

for a pattern of the world.

In conjectures I durst not be too bold,

but when they seem to offer themselves,

they deserve the choice of judgment.

ONE
The Politics of Salvation

I
t was a defensive and angry King Henry VIII with his compliant ministers, clerics and a complacent Parliament who had snatched the English church from papal control. In the years after this sensational event, the struggle for the soul of England and Wales was conducted variously with dignity, acrimony and cunning cruelty, as well as raging conviction. Religion remained ‘the motive power of the age’. The puzzled and beleaguered English Catholic community of clerics and laymen struggled to find a secure place in a challenging, discordant Protestant society in which some Protestant reformers heaped scorn on Catholicism, calling the Catholic Church ‘the Pope’s playhouse’ and endeavouring to prove that the pontiffs had in the later ages fulfilled the prophecy of St John in regard to the Antichrist. The chronological and historical sense of identity and obligation became severely distorted. The Elizabethan calendar year for the Church, law and government began late in March, generally coinciding with the major festival of Easter and the timeless, visible hope of spring. Popular usage continued to call 1 January ‘new year’s day’. Protestants and puritans alike shifted their religious observance away from the quotidian cycles of the land and the old liturgical cycle, because they lived in towns and there were clocks to rival bells. The disconnection had profound consequences. ‘The Protestants took upon themselves in different spirits the robes of the prophets.’
1
For those of the old faith an arhythmic and unnatural tugging at the spirit took place, engendering simultaneous feelings of belonging and estrangement. These were especially disturbing for the lesser peerage and gentry class of landowners; from the Humber to the Severn there stretched a solid belt of opulent and obstinate followers of the old religion.

Pressure on Catholics was immediate under Elizabeth since the religious settlement effected by and for her in 1559–60, which smothered the flames of Protestant martyrs, also completed the ‘institutional wreckage begun with the monasteries, advanced by the chantries acts and furthered by the conversions of the priesthood’. Even a mild resistance to this was hard to muster after the crashing failure in 1569 of the rebellion of the northern earls of Northumberland and Westmorland. From then on, Catholicism, like a great lake subject to a newly hostile climate, began to shrink to areas remote from London and the privy council, to country villages, sometimes to just a great seigneurial house and its environs, where observation and obligation fast tethered it. Lord Vaux made the point in 1581 when he claimed that his house had become his parish.
2
The rituals of the old faith could be conducted indoors with some trepidation, but public expressions of it were normally held to be too risky. Even so, there were those for whom its importance overrode disquiet at the possible consequences. The Rookwoods in Suffolk, for example, kept Corpus Christi, the greatest feast of the late medieval church, with great solemnity and music ‘and the day of the Octave made a solemn procession about a great garden’,
3
but ventured no further. The most unhappy pendant to the woeful failure in 1569, and the fierce government repression that then followed, on the instigation of William Cecil, Lord Burghley, was the insidious growth of self-pity.

This erratic growth could lead to a lack of realism as the government pressed their advantage and devised an auxiliary policy of seeking to impoverish Catholics materially. As their wealth was gnawed away, so too was their chief spiritual resource – the priesthood. Out of this dismal jam of oppression and self-repression (a key component in the growth of a conspiracy) came elements of resistance and among the clerics in exile there was the notable Dr (later Cardinal) William Allen to give voice and funds to their efforts. His initial leanings to Protestantism had been swamped and he regarded the Elizabethan Settlement as an affront to believers.
4
When he at length founded the English College at Douai in Flanders it was ‘so that English seminarians could return home to gentry households, primarily in London and the Thames valley where Catholicism was not the strongest, in order to provide pastoral care and, in some cases, engage in soul-saving.’ Since the gentry household was a supportive institution for an extended ‘family’ of blood relations and servants, the government saw no option but to apply pressure. The looming problem was now to extirpate Catholicism by statute without provoking a sequence of bloody stirs that would have to be put down with rigour. It was a problem given another twist by the maverick presence in England of a Catholic claimant to the English throne – Mary, Queen of Scots. Moreover, the end of the rebellion in 1569 had not been instantly achieved, and the government doubtless reflected ruefully on their good fortune that the earls were incompetents.

Nor had their external sympathizers proved much wiser, it has to be said, and the publication of the papal bull
Regnans in Excelsis
(25 February 1570) confirmed this. The purity of intention of Pope Pius V need not be doubted for he had a mode of thinking unblemished by low political considerations. He held Elizabeth to be an open, avowed heretic, who had broken her solemn promise, and all that was necessary was this bull which would restore the faith. It excommunicated her from the Roman Catholic Church without warning because of her manifestations of heresy, and it immediately deposed her from the throne without the usual formal delay of one year following excommunication. The people were hence released from obligation or allegiance to this ruler and commanded to flout her laws. Even without a clear call to Catholics to rebel, such risings as happened were condoned, so encouraging those who previously might have held back from such an extreme tactic. So the bull polarized domestic matters in an international context when it was made public in England by John Felton, the Catholic barrister who nailed it to the door of the Bishop of London’s residence in a wry parody of Luther. It suggested to many ‘that patriotism could not permit them to follow so extreme a religion’. But others recoiled because if they took the Pope at his word it was likely that they too would die like Felton on the gallows. Papal support of the Ridolfi plot against Elizabeth was equally ill-advised; the vision of a saint in the making in Rome did no harm for the time being to Mary Stuart, but her ally the Duke of Norfolk was tried and executed in 1572.
5

It is worth recalling that in its particulars the Elizabethan Settlement never had been lenient. To accelerate acceptance and flush out dissenters a parliamentary statute was passed in the spring of 1563. Known as
An Act for the assurance of the Queen’s Majesty’s royal power
. . . it was directed ‘against those that extol the power of the Bishop of Rome and refuse the oath of allegiance’. The dilemma for Catholics was underscored by the retributive element: on the first refusal to take the oath they were liable to loss of lands and imprisonment, and a second refusal was regarded as treason and punishable by death. After the 1569 rebellion, which had so shaken confidence, the government issued Queen Elizabeth’s
Defense of Her Proceedings in Church and State
which outlined her authority in the Church. It made claims for royal authority that were modest when compared to the statements of her father, while still declaring the intention to oversee ‘the laws of God and man which are ordained to that end to be duly observed, and the offenders against the same duly punished . . .’. New legislation was passed in 1571 by Elizabeth’s third Parliament. In the Treasons statute there was a direct borrowing of a phrase from the earlier statute of 1534 which prohibited any speech of writing that labelled the monarch a ‘heretic, schismatic, tyrant, infidel or an usurper’ – all things that the more reckless of the animated disciples of Mary Stuart were liable to example. To buttress the statute there was now a prohibition on spoken words or texts that denied Elizabeth’s lawful occupation of the throne. A second statute made the attempt to execute a papal bull treason, as was any attempt to lure to Rome anyone willing to jettison their obedience to the queen. The third statute was directed against the property of Catholic exiles, especially those who had scattered after the disaster of late 1569 – the rebellion being followed by summary trials and many executions.

Predator's Salvation by McKeever, Gracie C.
Agnes and the Renegade (Men of Defiance) by Levine, Elaine
Quatermass by Nigel Kneale
Dead Is Dead (The Jack Bertolino Series Book 3) by John Lansing
Milo Talon by Louis L'Amour
Zak Turner - A Twist In Time by Noel Pogson
Stealing Second (The Amendments Book One 1) by Nicholas Antinozzi
Where the River Ends by Charles Martin
A Whispered Darkness by Vanessa Barger
The SEAL's Secret Heirs by Kat Cantrell
Our partner