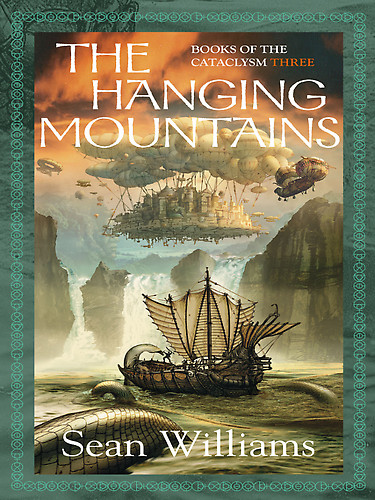 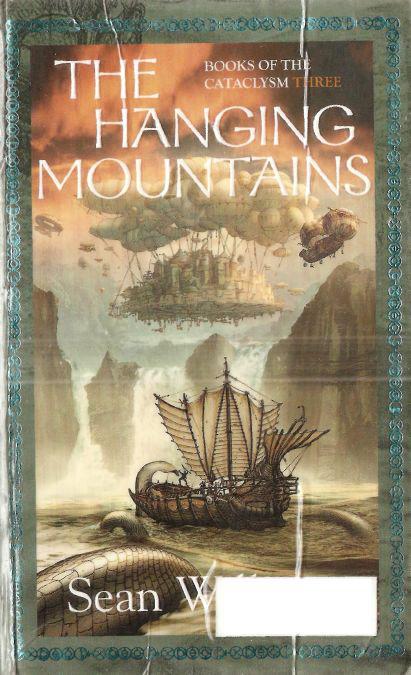 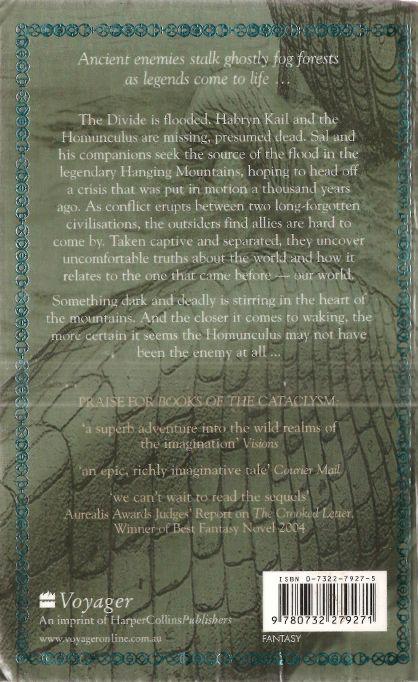 Grey clouds hung low like damp sheets over worn stone buildings and streets that smelt faintly of shit. Habryn Kail wrinkled his nose. He’d never much liked cities, and Laure only reinforced that opinion. While he could forgive much on account of its recent flooding, his patience only extended so far.

‘That’s an exorbitant price,’ he told the stall owner, ‘for a compass that doesn’t work.’

‘None of them are working as they ought.’ The dirty, pale-skinned man pulled a sour face at the wavering needle on the dial before him. ‘I assure you, sir, that if north could be measured reliably, this fine piece would do the job better than any other.’

The stall owner came out from his tent to pursue the sale, but Kail waved him away. Kail wasn’t interested in compasses; there were other, more reliable means of maintaining a course. Food, however, he did require, along with a large hooded cloak. And a camel, if he could find one in his price range likely to live out the week. Unfortunately, Laure wasn’t Tintenbar, where traders from all over the Interior gathered to meet their counterparts on the far side of the Divide. No need went unfulfilled in those markets and, for an assiduous purchaser, obtaining anything of quality was not an issue. Laure’s isolation, however, meant that quality cost money — money he didn’t have. He would have to work hard at stretching what he did have to fully provide for the journey ahead.

At least, he thought wryly, water wasn’t likely to be a problem. Within days of the flood that had filled the Divide from side to side, ominous clouds had swept in from the east, bringing with them rain unseen in those parts for generations. The Laureans had quickly familiarised themselves with the phenomenon; where once they might have danced in the streets at every drop, now they muttered about flooding and cursed the threatening sky.

Atop their slender poles, the yadachi sat like crimson-plumaged, long-tailed birds, taking the measure of the weather in absolute silence. What they thought of it, Kail couldn’t imagine. He didn’t ask, either. His visit to Laure wasn’t a social one. Once he had his supplies, he would be on his way.

A camel-herder relented under heavy coercion and sold him a barely adequate old nag for more than half the money he had. Half of the remainder went on the cloak. By the time he had filled his new saddlebags with dried meat, flat bread, and salted plums — a guilty pleasure he always indulged on long overland trips — he had barely a coin left in his purse.

A pawnbroker occupied one corner of the market, his grubby stall cluttered with the detritus of failed dreams and addictions. Kail briefly considered divesting himself of the one truly valuable item remaining in his possession. In the course of asking after his former companions as he went about his business, he had learned that the Surveyor Abi Van Haasteren was organising an expedition back to the ruined city known as the Aad on the other side of the Divide, there to seek a marvellous, opalescent relic called the Caduceus. One piece of the Caduceus wasn’t with the others, because it currently rested in a cloth bag suspended from a thong around Kail’s neck. He knew Van Haasteren would want it, to complete the artefact, so it was bound to fetch a fair price.

A fear that he might regret too hasty a decision made him hold on to it. The Goddess only knew when he might need the money more than he did now, or if he might need something to barter with the Stone Mages — or how much attention he might draw to himself in the process of selling it...

‘You’ve got a well-travelled face,’ called a withered old seer as Kail stood, with one hand on the camel’s harness, running through a mental checklist to make sure he hadn’t forgotten anything. Clad in a dusty shawl that might once have been brilliant blue and red, the seer clutched shaking hands in her lap and wore brass rings on hooked toes. ‘Why not let me tell you what lies on the road ahead?’

Kail almost didn’t bother responding. Market seers were as likely to possess actual talent as the jewellery in the next stall actual gems.

‘A test, eh?’ The seer cackled heartily, exposing more gaps than teeth. ‘It doesn’t work like that, son. It’s as hard to look into the past as the future, and few people will pay me to do that. They usually don’t like what they learn.’

That was an odd comment. Intrigued, he led the camel closer. It snorted and resentfully butted his shoulder.

‘Some say the future is a book we haven’t read yet.’ The old woman appraised him with one eye as he approached, the other screwed shut as though dazzled by a bright light. ‘The past is a book too, but not one we’ve read. It’s one we’ve
written.
That’s why I don’t like telling the past. People object to hearing that their book contains lies of their own devising — lies they tell themselves to make sense of things, to make it all bearable, to go on living. No one likes being caught out in a lie, do they?’

‘People lie about the future, too,’ she said, squinting even harder, ‘calling it hope or faith. I’m willing to bet I can’t catch you out at that. A pragmatist like you lives in the moment. He knows that life is just a series of moments, one after the other. They come and go like beads on a string. If the string ever breaks you’ll be lost, and — ah!’ She leaned back with her mouth open in triumph. ‘Yes! Got you.’

‘What do you mean?’ he asked, although he knew full well. He’d felt his face tighten at her comment about being lost, and she — trained charlatan and observer of faces — had spotted the slip.

‘You’re on a journey. A long one.’ Her expression sobered. ‘It may not be the one you originally set out on, and your destination might not be the one you hope for. But a journey it is, and you will be changed by it in ways you don’t expect.’ She paused. ‘Pull up a seat, son. Let’s talk.’

A light rain had started outside the canvas covering of her stall. The weather didn’t faze him, but it did unsettle the camel. His curiosity pricked, Kail tied the restless beast to a post and folded himself into the seat opposite the woman. Reaching into his purse, he produced a coin and put it on the table between them.

She waved it away. ‘Pay me afterwards. For now, just give me your left hand.’

Kail did so, and she took it in both of hers. The skin of her fingers was rough with calluses as they explored his palm. Her eyes flickered shut.

He felt a tingle not dissimilar to pins and needles shoot up his arm. He almost pulled away, recognising the feeling — she was Taking from him! — but curiosity held him still. If she genuinely had some facility with the Change, perhaps her other claims weren’t completely false.

‘You said I was on a journey,’ he prompted, ‘a journey that would change me.’

‘No great revelation there. Anyone could tell that much from your clothes. And journeys always change us, otherwise there’d be no point going on them.’ Her attention wandered as though she was concentrating on something distant and hard to make out. ‘Your home lies far from here,’ she went on, and he felt the tingle again. ‘The sea calls you, but you don’t hear it. The ones you serve have lost your respect. You follow them no longer. You’re seeking your own path. You —’ She stopped. A sudden, indrawn breath hissed between her teeth. ‘You have been touched by darkness. A darkness I cannot see through. Not death. Not the Void. The darkness of — of ending. The ending of all things. I cannot —’

A deep menacing hum rose up as though an invisible cloud of bees was swarming around them.

She pulled free of him and clutched her hands to her chest.

‘What’s wrong?’ he asked, shaken by her reaction.

‘I don’t want to see,’ she said, shaking her head. Her voice quavered. ‘It’s too close!’

‘The darkness!’ She took a deep, shaky breath. ‘I’ve seen it before, but never so near. Your shadow stretches before you, blacker than night. You’re walking to the end of the world and do not know it.’

She opened her eyes slowly, painfully. ‘That you’ll have to find out for yourself. I can’t see it. It is utterly beyond my ken.’

Kail wanted to press her for more information, but he took pity on her. She seemed abruptly to be much older now than earlier, and weary with it. Her gaze wouldn’t meet his.

‘My apologies,’ he said, adding another coin to the one already sitting on the table. ‘I didn’t mean to burden you.’

He stood. The rain hadn’t eased. It had strengthened, if anything, falling in hot, heavy waves over the market stalls. People scurried for shelter and covered their wares. The drenched camel snorted and stamped its feet.

Chilled despite the dense, humid air, Kail took his leave of her and made haste from the city.

Hungrily, in the distance, a wolf howled.

Do you think
—
?
Hadrian started to say.

Best not to,
his brother cut him off.

A clatter of stones made them jump. Their connection to the world was growing stronger every day, but details remained sketchy beyond a few metres of their unusual body. Their four legs spread wide, they scanned the area around the campsite for any sign of trouble. It seemed to them that the light had dimmed, but whether that was because of cloud cover or nightfall they couldn’t tell. Far-off sounds might have been rain falling or wind sweeping across the barren earth outside their shelter. They were fairly certain it wasn’t anything more sinister than that.

Alone Together by Turkle, Sherry
Right Now (The Seduced Series) by McMahon, Jackie
Abducted (Passion in the Stars #1) by Daniels, Eliza
The Hundred Gram Mission by Navin Weeraratne
Steel Magic by Andre Norton
What He Craves by Tawny Taylor
Bad to the Bone (Wicked Reads) by Karin Tabke
Jacquot and the Waterman by Martin O'Brien
The Willows in Winter by William Horwood, Patrick Benson
All of Me (All Series Book 2) by Ann, Natalie
Our partner