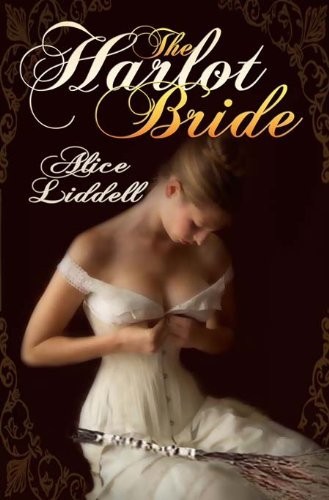 ©2010 by Blushing Books® and Alice Liddell

All rights reserved. No part of the book may be reproduced or transmitted in any form or by any means, electronic or mechanical, including photocopying, recording, or by any information storage and retrieval system, without permission in writing from the publisher.

The trademark Blushing Books® is registered in the US Patent and Trademark Office.

Like many men before him, and many men since, Edward Tazewell, Earl of Chiltenham, discovered his future bride in church on a Sunday morning. Now, I am aware that it is hardly unusual for a gentleman to find a wife in a House of God, for there are few enough opportunities for the sexes to come together in polite society. But it does surprise in Lord Tazewell’s case, for his tastes in women were unusual and specific. The sort of female who suited his dark desires was far more likely to be found in a gaming house.

Nevertheless, it was on a rare appearance in church, while visiting with his eldest sibling in London, that Lord Tazewell first laid eyes upon Miss Lucy Farquhar. His sister Eleanor actually pointed the lass out to him, yet it is fair to say that he would have noticed her in any case, for the young lady was a handsome specimen, with a lovely head of auburn hair and no small degree of poise.

Lord Tazewell had, through long and active years of sporting, developed the ability to view, as it were, through any amount of clothing, the exact form of the woman within. Thus Miss Lucy Farquhar’s modest church attire posed no obstacle whatsoever for his practised eyes. He discerned at once that she had a slender but saucy form, making her precisely the type of female he most liked to bed. The pew back obscured his view of most of her, but he was quite certain there was, seated atop the pew cushion, a strap–worthy derriere set off stunningly by a trim and tapered waist. But, in truth, even more than the lassie’s shape, it was his sister’s whispers that aroused Lord Tazewell’s interest in Miss Lucy Farquhar.

“Quite a scandal that one caused,” Eleanor confided. “Yes, that one. In the green dress. That one there, seated between the elderly couple.”

“Oh?” Lord Tazewell inquired, feigning only passing interest in his sister’s gossip, though in fact he was intensely keen to hear whatever she had to say about this young woman. And as luck would have it, the object of their quiet discussion chose that moment to glance back, not at him of course, but at someone or something in the pew behind her. Tazewell went still, transfixed. The girl was pretty, no question, but there was something more. A spark that was obvious even from three rows back. This was a filly just begging to be tamed.

“Everything was arranged for her to be presented at the last cotillion,” his sister was confiding, oblivious to the fact that the girl’s countenance had had any affect on her brother. It was just as well that Miss Farquhar chose that moment to return her attention to the front of the church, because Lord Tazewell was not entirely certain that, had she not reversed her position, he would have been able to continue to suppress all outward evidence of his now thoroughly aroused interest.

“She could have married well, that one, despite a modest if respectable background,” he heard Eleanor say as soon as he was able to focus again. “It was less than a year ago that she came to live with her great aunt and uncle, who, poor dears, have been quite overwhelmed by all that has transpired.”

Lord Tazewell inquired about the circumstances that brought the young woman to her great uncle’s household.

“Orphaned, and quite suddenly,” his sister replied. “I understand that the girl’s father was some sort of minor functionary in Calcutta until malaria took him and his wife, both at once.”

“She’s been living in India, has she?”

“Born and raised there, and like a heathen, it would seem. Her behaviour here in London has caused quite a stir; I’m rather surprised you haven’t heard,” his sister said, peering up at him from under the veil of her Sunday hat. Then she shifted her heavy backside on the pew cushion and straightened her spine, summoning forth a good dose of condemnation to accompany the tale of Miss Farquhar’s indiscretion.

“One week before the cotillion, just
one week
, if you please, she is out in the shops with her great aunt and meets up with a boy she knows from summers in some hill station or the other. Darjeeling, I should imagine. And off she runs with him, without so much as a by–your–leave to her poor aunt, and was subsequently seen all over town riding in a hansom cab full of young rakes and laughing and singing like a hellion. It ended in a supper club, not a chaperone in sight.” Eleanor actually sniffed. “Or one hopes it ended there, although I shouldn’t be surprised if there’s more to that tale. And one certainly hopes Miss Farquhar thoroughly enjoyed her little escapade, because that was the end for her. She’s finished. Quite finished.”

Noticing that the organist was making his way to the organ, his sister reached for a hymnbook from the rack in the back of the pew in front of them.

“Doomed to spinsterhood, and I hear there’s no fortune or family charity for her to rest upon. Once her old aunt and uncle pass on, she’ll have to make her own way in the world. She’d best find try to a position as a teacher or a governess, although I dare say it won’t be easy. Why employ a scandal? There are plenty of honest women available.”

Indeed, thought Lord Tazewell, as the first chords from the organ filled the room. There is no shortage of morally upstanding young women. It is tainted women such as the lovely Lucy who have proved so much more difficult to find, at least among females of suitable learning and refinement.

Brother and sister rose with the rest of the congregation as the vicar walked toward the pulpit, but Eleanor still had a moment, before the service started, to pass sentence on the young woman in the green dress, and she did so with alacrity.

“Her looks won’t help her now. After a scandal like that, there’s not a decent man that would marry her!”

Perhaps not, Lord Tazewell thought, smiling to himself. But I’m no decent man. And Miss Lucy Farquhar will serve my purposes very well. Very well indeed.

And as the good Christian men and women around him sang praise to the Lord, Edward Tazewell, Earl of Chiltenham, congratulated himself on his good fortune in having come to church that day, and passed the rest of the service weighing various options for how he might take, for his very own, that saucy young scandal in the green dress.

It was clear from the reception he received upon his arrival at the house at 17 Pickford Street that that Mr. and Mrs. Graham did not know what to make of the Earl of Chiltenham’s request to pay them a call. Lord Tazewell had sent his footman around earlier with a letter, written on fine stationary and sealed with wax, and had instructed his man to wait for the couple’s response. Of course the Grahams would be deeply honoured to receive his Lordship, said the reply. They would await his call at 3 o’clock that afternoon, just as his Lordship had suggested.

The house was modest, but there was a maid to bring in the tea tray and probably a cook in the kitchen, judging from the freshly baked scones. As the maid set the tray down on the small mahogany table in the center of the room, the flustered elderly couple did their best to make polite conversation, although it was clearly a challenge for them to keep their mind on anything other than the maddening question of why an earl was seated in their parlour.

Lord Tazewell waited until the second cup of tea.
“I expect you’re wondering why I’ve asked to meet with you,” he said.
Mr. and Mrs. Graham allowed, through nervous noises, that this was indeed the case.
“I’ve come to ask for the hand of your niece Lucy.”

The old man dropped his teacup. Actually dropped it. It fell first against his knee, soaking his trousers with the sweet milky liquid, and then to the floor where it shattered into a dozen pieces.

Hearing the commotion, the maid returned in a great hurry from the back of the house, and thus nothing more could be said until the mess was attended to and the man of the house had been provided with a fresh cup of tea and a towel to drape over his trouser leg. When at last the maid had left the room again, poor Mr. Graham cleared his throat.

Mr. and Mrs. Graham stared at the gentleman, wondering if he was out of his mind. They decided they must have misunderstood him. He couldn’t possibly want Lucy as a wife.

“I blame myself,” Mr. Graham said finally, shaking his head sadly. “I knew we’d been landed with a hellcat but I’m too old and too frail to do what I knew was necessary. Her parents spoiled her. Let her run wild out in India. I should have taken a stick to that girl the moment she arrived.”

“Indeed you should have, Mr. Graham,” Lord Tazewell concurred, with more candor than good manners permitted, even in the case of an earl. “She’ll not find me a lenient husband.”

Good god, Mr. Graham thought, throwing a baffled look at his wife. He’s serious about marrying Lucy. What kind of madness was this?

Lord Tazewell drew out pen and paper from his coat and wrote out a figure.

“There will be no ceremony, given the circumstances, but she will be legally wed. Further, I would like to settle a modest sum upon you, her guardians, as reparations for the emotional distress you have suffered as a result of my future wife’s appalling behaviour.”

He folded the paper and slid it discretely across the little table towards Mr. Graham. “I trust this sum will be sufficient to make amends.”

Mr. Graham picked up the paper, unfolded it, and was stunned again.

“It’s.. it’s far too generous, my lord. Forgive me for questioning you, Lord Tazewell, but I don’t understand why…”

“It is enough for you to understand that I have said I am willing to marry your niece, Mr. Graham,” the earl said impatiently. “You and I are both aware that she will not receive another offer, and while society may not comprehend or condone my decision, it will have no choice but to accept it, if only grudgingly and after a suitably lengthy period of time has passed, for no reason other than that an earl has chosen to make her his wife. For a woman who has shamed herself as your niece has, my offer is nothing less a hand snatching her from the gates of Hell.”

“What you say is unquestionably true, my lord,” Mrs. Graham began carefully. “It’s far more than Lucy has any right to expect, after what she did. But I fear that Lucy doesn’t…” The elderly woman hesitated. “Lucy doesn’t….well, she has never fully appreciated the seriousness of her situation. Perhaps it’s having been raised in India, but she doesn’t seem to understand the way a grown woman ought to conduct herself, nor does she have a realistic view of social expectations. She has told us on more than one occasion that the fuss would blow over in a month or two and…”