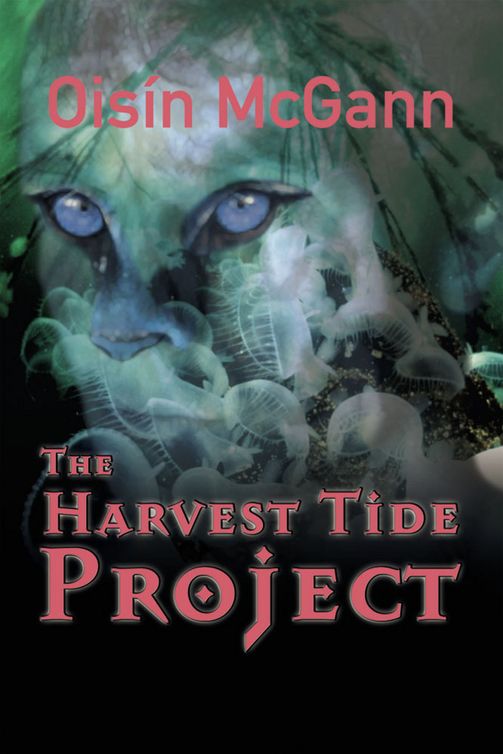 ‘Inventive comic fantasy in which Lorkin and his sister Taya become involved in saving their tribe from the clutches of power-crazy neighbours: some wonderfully weird secondary characters.’
The Irish Times

‘I thoroughly enjoyed it. It’s one of those rare gems that are perfect for every age group.’
Evening Echo

‘I would definitely recommend this book to other readers, as it is a spectacular tale, full of adventure and magic. Because of its fast-moving plot and straightforward style, I think this book is suitable for 10 to 15 year olds.’
Teenager reviewer, Evening Echo

P
RAISE FOR
THE GODS AND THEIR MACHINES

This is for my brother, Marek – for being there to talk stories when we were young.

While
The Gods And Their Machines
was my first novel to be published, this was the first one I wrote. I want to thank my family, friends and all those who offered input and
encouragement
while I struggled to get it right. The first couple of drafts of
The Harvest Tide Project
were written while I was in England, and I owe a debt to my aunt, Margaret Summers, and my cousins Sinéad, David and Mary for making me feel welcome in London, and helping me get settled. I’m grateful to the people at O’Brien Press – particularly my editor, Susan Houlden – for their expertise and support, and for taking the risk with my books. I’d also like to thank the world of
advertising
, for making me want to quit and find a better life. And a special thanks to my Mum … for everything.

7: G
ETTING
A
NSWERS IN THE
S
TORYHOUSE 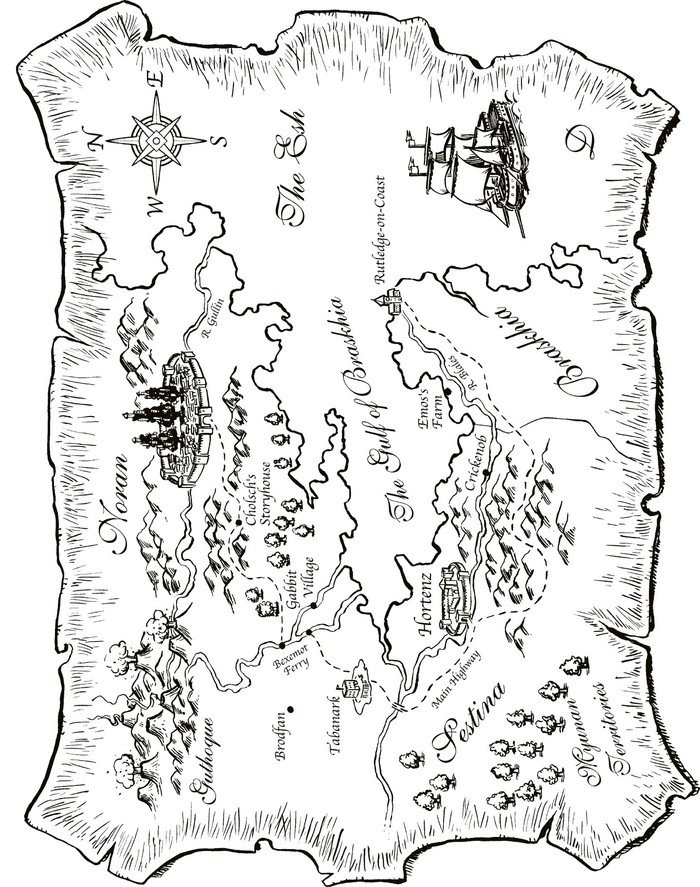 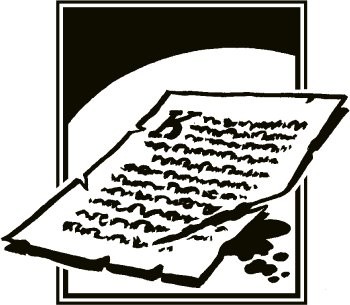 If Taya and Lorkrin Archisan had known how much trouble their curiosity would cause, they might have thought twice about searching for that door. But they would probably have gone and done it anyway.

It was Lorkrin who had first discovered that two of the rooms were too small for the house. The combined length of the two rooms that lay within the west side of their uncle’s farmhouse was four paces shorter than the outside of the house. Walls just weren’t that thick. So, like anyone else with an imagination, they had come to the conclusion that they had found a secret room. All that remained was to find the door and figure out how to open it.

While Taya searched the dividing wall in each room, Lorkrin started pushing and pulling things in the hope of finding a hidden lever. He was disappointed with the lack of results. Not one of the candlesticks, books or pieces of sculpture caused any movement in the stone wall. But Taya did find something, a small gap between two of the stone blocks, hidden from sight behind a small tapestry. She called her brother in the next room and moved the embroidered picture out of the way to show him.

They both knew that their uncle would not use a normal catch for his hidden door. He would have built something only a Myunan could open. Myunan flesh was unique; it could be shaped and reformed like modelling clay, allowing them to change their shape at will, an ability known as ‘amorphing’.

Lorkrin watched as Taya pressed her right hand down on a side table, letting it go soft and kneading it out with the left until her wrist, palm and fingers tapered into a flat, knife-like shape. It was now thin enough to slip into the gap between the two blocks. In the cavity behind the wall, she felt a round handle and, keeping her wrist thin and flat, she let the rest of her hand go solid again and grasped the handle with her fingers. It turned smoothly and there was a click. The two children breathed out softly with excitement. They had found the entrance to their Uncle Emos’s studio.

With a whirring sound, a section of wall swung inwards, and the two Myunans peered inside. A flight of steps led down into the darkness of a cellar. Taya slid her hand from the gap in the blocks and slunched, letting her arm return to its normal shape. Lorkrin found a lantern hanging just inside the door and fetched some matches from the kitchen to light it. Then the boy started down the steps, closely followed by his sister. The steps led further down than they would to a normal cellar. Taya counted fifty-two steps to the bottom, and what they saw there explained why it was so deep, so secret.

Here was the proof that their Uncle Emos practised the dark art of
trans
morphing – forcing other materials to become as pliable as his own flesh. The room was as big
across as the whole farmhouse above it, with eight brick
pillars
supporting its roof and the walls lined with shelves and cupboards. One wall was given over entirely to a rack of deep, square pigeonholes to hold a huge collection of scrolls. Myunans did not use books; what little they did write down was in the form of pictograms on sheets of vellum.

Taya and Lorkrin had no interest in the scrolls, because all around them were several workbenches where Emos
practised
his craft. On each was at least one work in progress. Pieces of metal, wood, even some living plants, had been twisted and contorted into weird and unnatural shapes. There was a cactus that been sculpted into a winding
centipede
, a windblown tree crafted from dinner forks, and there was even a sheep’s skeleton that had been transformed into an armchair. The plants were the most fascinating. Still living, they had been distorted beyond recognition as Emos honed his skills. All around, stumps of trees, shards of metal and other materials were in various stages of being twisted into human or animal figures. The half-finished pieces betrayed the unnatural way he could work any material as if it were clay, with fingerprints left in solid steel, and wood spread across bench-tops as if turned to liquid. So this was what transmorphing looked like. Emos Harprag was
obviously
a master at sculpting other objects as if they were extensions of his own malleable body. It went against
everything
Taya and Lorkrin had been taught, and it gave them the shivers. But the children walked around the room, spellbound.

‘He’s going to be really angry if he finds us here,’ Taya whispered.

‘He can’t blame us for having a look around, can he?’
Lorkrin argued. ‘It’s not like he
told
us to stay out, is it?’

‘No, he didn’t tell us anything about this place,’ Taya said back. ‘That’s the whole point. This is supposed to be a secret.’

‘Well, think of it this way,’ her brother persisted. ‘If he had told us he had a secret room somewhere, but he didn’t want us looking for it or going into it, then he could be mad at us. But seeing as he didn’t mention it, and we’ve just happened to find it … it’s sort of like we’ve earned the chance to have a look around, yeah?’

Taya gave her brother a withering glance and he could tell that she was not convinced. But then, neither was he. Emos was away in Rutledge and would not be back for some time, so they decided to leave the worry about punishment for later. In the meantime, there was a fantastic new world to explore. Neither of them had seen transmorphing before; they had only ever heard stories about it. It was strictly
forbidden
for Myunans. Lorkrin picked up one of the curling hooks and admired the craftsmanship. He and Taya still only had novice tool sets, and, of course, they were only able to use the implements on themselves. Uncle Emos had the tools of a master.

‘Ma and Pa said he’d stopped after Aunt Wyla died,’ he said. ‘Do you think they know about this?’

‘Of course they know,’ Taya grunted. ‘Pa helped him build the house, didn’t he? They just don’t tell us anything, that’s all.’

She came to a workbench near the centre of the room. On it were a few tools, some scrolls covered in sketches and a tray holding a clump of mushrooms that were on their way to becoming a crouching frog. She ran her fingers over one
of the sheets of vellum and gasped. The notes on the calf skin were not made by ink; they seemed to have grown into the hide itself. The page was only half full, and there was a quill lying beside it. There was no bottle of ink in sight.

‘Lorkrin, look at this! He can use the transmorphing to write.’

Lorkrin picked up the quill.

‘He must save a fortune on ink,’ he quipped.

Taya held up another sheet and studied the script. It was Sestinian, and she was not able to read some of it, but it was definitely describing some arcane techniques.

‘Let me see!’ Lorkrin snatched it from her to try to read it.

‘Hey! I was looking at that!’ his sister snapped and seized the page. Lorkrin pulled back automatically and the vellum stretched and tore. They froze, staring in horror at what they had done, and around them there was the sense of a breath being drawn. Then, from the very sheet in their hands, there came a sound like the shrieking of a cat. Staring down at it, they saw blood starting to ooze from the torn edges. They dropped the vellum to the floor and stepped back from it, covering their ears to block out the raucous crying.

Taya didn’t answer. She was already heading full tilt towards the stairs. Lorkrin darted after her, on her heels as she ran up the steps. At the top, they blew out the lantern, hung it back in its place and swung the heavy door shut. They leaned against it as if to hold it closed and tried to catch their breath. Lorkrin jumped as he realised he was still
holding
the quill. What should he do with it? He did not dare leave it out where their uncle might see it. He tucked the pen
away in his tool roll and swore to himself to try to return it later.

‘I don’t know,’ her brother muttered. ‘All I know is that I don’t want to be here when he gets back. And we can’t go home, because that would be just as bad as soon as he found us. We need to get out of here. I think we should run away.’

‘Yeah, I think so. But not like the other times. I mean really far away, maybe Hortenz or even further. We went into a room we weren’t supposed to be in, tore a page we weren’t supposed to see and set off a hex. I think we need to get out of the country. We could go to Rutledge, hide on an esh-boat and maybe get a ride up the coast.’

Taya considered this. It was drastic, that was true, but they had seen Uncle Emos angry before and they had been trying his patience lately as it was. He would not take this well. Taya looked into her brother’s frightened face. Deep beneath her feet, she could just hear the sobbing of the torn vellum. A lump rose in her throat and she gulped.

Rebecca's Rashness by Lauren Baratz-Logsted
Stormy Challenge by Jayne Ann Krentz, Stephanie James
The Last of the Ageless by Traci Loudin
Positive Options for Living with Lupus by Philippa Pigache
The Diary of Bink Cummings: Vol 4 (MC Chronicles #4) by Bink Cummings
Please by Hughes, Hazel
The Small BIG: Small Changes That Spark Big Influence by Steve J. Martin, Noah Goldstein, Robert Cialdini
Beating the Babushka by Tim Maleeny
Every Bitch Has A Secret by ASHLEY SHAVONNE
Across the Creek by Asher, Jeremy
Our partner