Read The Healer's Kiss: Book Four of the Forced To Serve Series Online

The Healer's Kiss: Book Four of the Forced To Serve Series 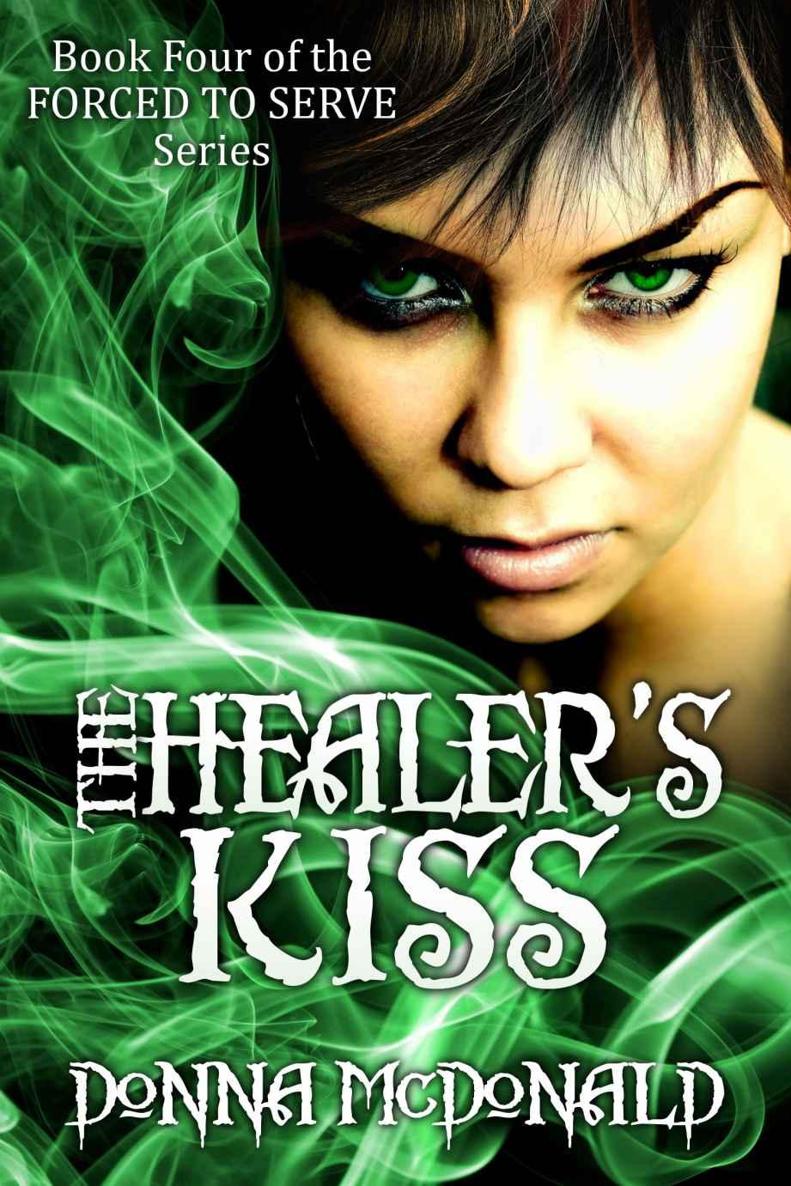 Excerpt from THE DEMON’S CHANGE 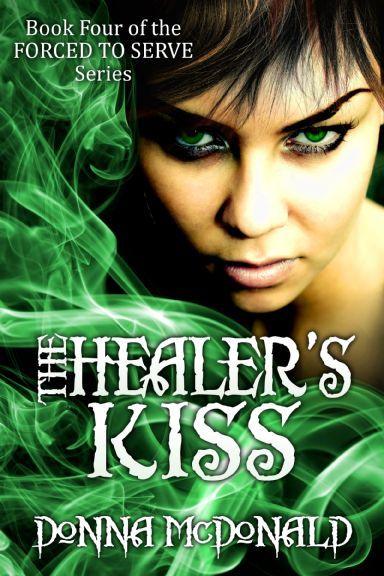 Book Four of the
FORCED TO SERVE
Series

Cover by LFD Designs for Authors

This ebook is licensed for your personal enjoyment only. This ebook may not be resold or given away to other people. If you would like to share this book with another person, please purchase an additional copy for each person you share it with. If you're reading this book and did not purchase it, or it was not purchased for your use only, then you should delete this file from your device and purchase your own copy. Thank you for respecting the author's work.

Thanks to my editor, T Minton, for taking time out from writing his amazing book to edit mine.

Thanks to the readers and fans of the Forced To Serve Series for continually asking for it.

This book is for Paulette R

I hope Boca inspires you while you follow the path of your own warrior journey.

Go in peace, Sister. May the Creators watch over you.

Chiang walked into the Liberator’s main conference room, saw Boca sitting beside Ania, and immediately went to sit in the vacant seat beside her. Glancing around the room, he didn’t see the captain yet. Perhaps he could get to the bottom of his greater concerns before the meeting began.

Trying to keep their conversation as private as possible, Chiang leaned sideways to whisper his demands. “Where were you last night, Boca? And how did you manage to stay one step ahead of where the com unit said you were?” When Boca continued to ignore him, Chiang soften his tone and tried a different approach. “I tried to find you to apologize.”

“No apology is needed. Nor do I intend to request one,” Boca said, staring straight ahead across the table.

“I realized I behaved poorly yesterday. I interrupted your training with the ensigns, perhaps embarrassed you.
At least look at me while I’m groveling,
” Chiang ordered, his voice rising on the final complaint.

The room went silent in surprise at Chiang’s raised voice. Everyone’s gaze turned to them. Boca lifted her chin, trying not to be mortified by all the attention.

“Your emotional state is not my concern,” she declared, hissing the words. “Now be at peace and let me do the same, Chiang.”

Chiang drew in a frustrated breath and swore in his native Greggor tongue as he turned sideways in his seat to face her more fully. Just as he was about to demand a full explanation about why she was avoiding him, the door opened to let in both Captain Synar and Malachi. The demon came immediately to the empty seat on the other side of him and had the audacity to return his frustrated glare with only a respectful nod. Chiang hated that Malachi so thoroughly enjoyed his conflict with the stubborn Sumerian female.

“Our discussion is not over,” Chiang warned in another whisper before facing forward to listen to Synar. He flinched as Boca glanced at him nervously and swallowed hard. What had he said to scare her now?

“Good. No one had conflicts today I see, not that I would have allowed any to prevent this meeting,” Synar said. His tone full of sarcasm, but for once he didn’t care what his crew thought of his emotional state. “This discussion is long overdue, and implementing my requests will take some time. So let’s get to the point right away. No one—and I mean
no one
—is leaving the Liberator on any mission again until new tracking measures have been put into place.”

“Captain? I detect some very strong emotion in that order. Are you angry with our performance?” Gwen asked.

“Angry? No, not angry, Commander. Just finally exercising my right to change some things and run the Liberator as I see fit.” Synar pressed the com button firmly, looking at the entire group as he spoke. “Audio recording requested for this assembly. Grant general access to data. Record and distribute to all participants in the room at this time. Use visual scanning to determine full list.”

Synar stood so he could walk around the table.

“We’ve had three high ranking crew members and a guest on the Liberator get captured. Some were taken right off my own ship while everyone watched. I’ve decided changes are required to make sure this never happens again. Up to now, I haven’t been much more than just the person who sets our course and arranges missions,” Synar said. “You are hereby put on notice that going forward I plan to be the person who makes the rules as well.”

“Again I ask, with all due respect, Captain Synar—
what the hell has got your shorts so twisted concerning us?
” Gwen demanded.

“Despite your irreverent tone, that is a good question, Commander. For starters, I’m tired of my crew getting abducted,” Synar said. “We lost a crew member on Lotharius during the last mission there, which will not happen again if I can prevent it. While the ensign’s death was the culmination of our weaknesses, the fact is we’ve spent more time recovering our own crew than rescuing officials for several missions now.”

He turned his full attention to Ania.

“Peace Keeper Looren, I let you talk me into your going with Commander Jet on the Terris Rein mission without Malachi. I convinced myself your Khalsa training would protect you, which it might have if you not been rendered and kept unconscious. My instincts were screaming at the time that it was a mistake though. But did I honor my intuition? No, I did not. I think we both know why—as does every other person in this room.”

“Do not blame yourself for what happened to me, Liam. I did not foresee my abduction either,” Ania said, trying not to sound defensive. She still did not understand how she had been caught so totally off-guard. And she didn’t need Liam reminding her.

“My point exactly—
neither of us
saw it. Dorian was unavailable. Chiang was in denial. And Gwen’s intuition was not fully developed at the time. I knew that, but I still ignored it.”

“On that we agree, which is why from now on, Malachi will always accompany you, either in your body or as mist. Is that clear, Peace Keeper Looren? This is your captain speaking, not just your mate,” Synar said for clarification, pointing to the com. “This order is being entered into the official record for my ship. You will obey it or you will never leave the ship again.”

“Aye—your command is clear, even if perhaps not practical,” Ania conceded, mostly ignoring Liam’s attempt to use his authority.

Both of them knew she was not an official crew member. Technically, as Malachi’s host, she wasn’t an independent entity at all. She was all but invisible.

“You know it was the demon they wanted, not me. Malachi’s presence may or may not have made a difference in that particular case,” Ania argued.

“It is not a request, Ania,” Synar said flatly. “Malachi will accompany you on all future missions. End of discussion.”

Ania lifted a hand in surrender when she saw further debate would gain her nothing.

Synar nodded at her gesture. “Good. Now for the next issue.”

He paced down the table and away from the female who was always distracting to him.

“Having crew members abducted is bad enough, but not being able to locate a captured crew member is unacceptable. Boca Ador served as a senior medic at a facility that placed Sumerian agents in covert places. She and I have consulted about some alternatives that would make crew members traceable with a handheld device at planet ground level even when ID scanners on ships cannot find them. I’ll let her explain how it works.”

When all gazes swung to Boca expectantly, she swallowed against the tightness in her throat and lifted her chin. “There is an ink made from the Andrius plant that puts off a distinct and traceable biological signature that a handheld scanner can easily find. Sumerian agents often draw a design in this ink on their bodies, which looks like a normal adornment. When ID chips are scrambled or even removed, the ink allows the agents to be found anyway.”

Gwen laughed. “So what are you suggesting, Boca? We’re all supposed to get tattoos using this ink?”

Chiang calmly stood and pulled off his doctor’s tunic, turning his back to show Boca the markings on his shoulder. “A tattoo is just the Earthling word for this kind of body adornment. Mine is my Greggor family’s marking.”

Boca’s gaze fixed itself initially to the intricate design of the mark on Chiang’s shoulder, but she couldn’t prevent it from following the smooth skin down over the rest of his impressive back.

When Chiang turned back to face her, his gaze held hers to see if she understood. Awareness happened in a rush and was followed by an arousal so intense it was painful. Boca swallowed nervously again. Using all her willpower, she wrenched her gaze from Chiang’s body while he tugged the tunic back on.

The Mirror World of Melody Black by Gavin Extence
All the Way by Marie Darrieussecq
Mr. Monk and the Two Assistants by Goldberg, Lee
Rock Star Kisses (Romance on the Ranch Book 6) by Verna Clay
Mistress of Dragons by Margaret Weis
Witched to Death by Deanna Chase
With Cruel Intent by Larsen, Dennis
Letters to Leonardo by Dee White
Unleashing His Alpha by Valentina, Ellie
A Quiet Kill by Janet Brons
Our partner