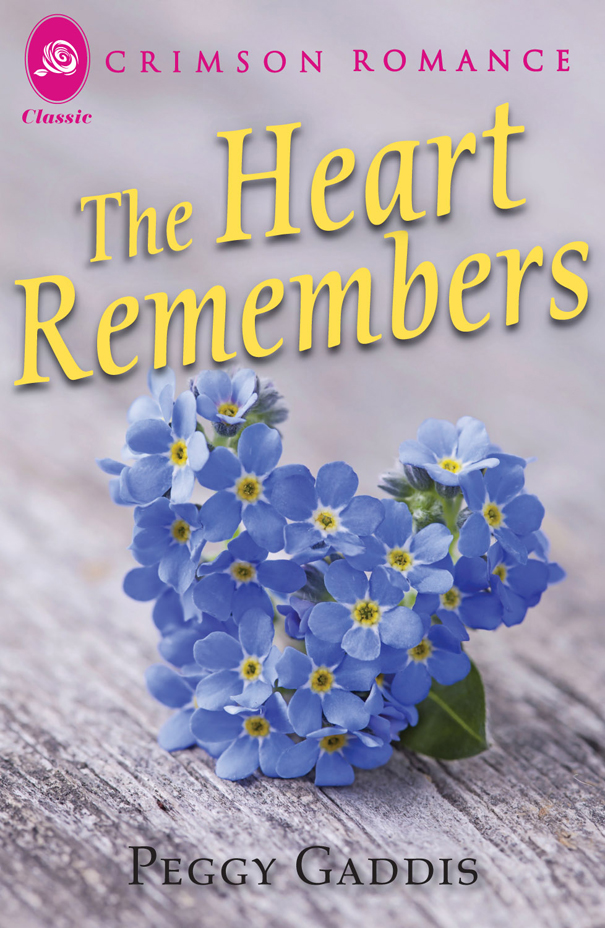 More from This Author

The station agent stared at her in frank astonishment.

“There's only one bus a day to Harbour Pines,” he told her. “That one leaves at nine forty-five in the morning.”

“But it's only two o'clock in the afternoon now.” Shelley's voice was a small wail of dismay as she looked uncertainly about the ugly little town clustered haphazardly about the railroad station.

“What do you want to go to Harbour Pines for, anyway?” demanded the station agent with such honest and lively curiosity that Shelley, unfamiliar with the interest and concern of small-town inhabitants for anything and everything outside their daily routine, did not understand his lack of intention to offend.

Her smoke-gray eyes darkened and she lifted her chin.

“I have business there,” she told him frostily.

But the station agent was unabashed and unconvinced.

“
You've
got business in Harbour Pines?” His tone was flatly skeptical as his eyes swept from the gay, silly little hat atop her burnished red-brown curls, over the well-cut gray suit, the smoky, green-gray tweed topcoat that swung from her shoulders. He shook his head. “That I don't believe!”

Shelley gasped and her eyes were like silver-gray ice.

“Frankly, I can't see that it's any of your concern,” she told him sharply. “I merely asked you how one gets to Harbour Pines, since there is no railroad station there.”

The station agent was placidly undisturbed by her anger.

“Must be visitin' somebody there,” he mused, his eyes taking her in with deep appreciation of her beauty, the smart, expensive clothes, the handsome luggage that surrounded her. “Still, I reckon not. Ain't heard o' nobody in Harbour Pines that was expectin' company that'd look like you.”

And Shelley, realizing that he was as friendly as a puppy, as curious as a child and quite as innocent of any desire to be offensive, laughed and gave in.

“You win,” she told him lightly. “Since it interests you so much, I may as well confide in you. I have bought the
Harbour Pines Journal
and I intend to publish it.”

The station agent was so startled that he almost swallowed his quid of chewing tobacco. He choked, his eyes wide, and stared at her as though suddenly she had sprouted wings and gone flying about the station.

“Oh, for gosh sakes, a newspaper, in Harbour Pines? Lady, you've been sold a pig! Why, there ain't more'n a thousand people in Harbour Pines, counting the one-eyed houn' dawgs. And most of
what's there can't read. What in tarnation d'you want to start a paper there for?”

Shelley set her teeth hard and counted slowly to ten. And then she said slowly and distinctly, “I am not exactly âstarting' a paper there. It seems that the
Harbour Pines Journal was
a well-established and modestly successful paper.”

“Oh, sure, 'bout fifteen-sixteen year ago,” the man agreed. “But that's a long time ago. A mighty lot o' water's flowed under the bridge since then.”

He broke off as a battered station wagon thumped up to the edge of the platform and a tall, rangy young man in worn khaki riding breeches, high-laced boots and a faded khaki shirt jumped out and began loading some freight into the back of the station wagon.

“Greetings, Tom,” said the tall young man, heaving what must have been a heavy box expertly into the back of the station wagon. And then his eyes caught on the girl in green and gray who stood beside the station agent, looking as much out of place in that shabby spot as an orchid in a bed of field daisies.

The tall young man's eyes warmed and he came striding across to them, his eyes on Shelley, but his hand extended to the grinning station agent.

“Save it, son, save it,” said Tom. “I was gonna introduce you anyway. Matter of fact, the little lady here says she wants to go to Harbour Pines.”

“Nonsense, friend.” Jim was shocked. “You misunderstood her. Nobody
wants
to go to Harbour Pines. Sometimes a fellow
has
to, but not from choice.”

Shelley lifted her head and her eyes were ice-gray.

“Between the two of you,” she said frostily, barely
managing not to snap at them, “you make Harbour Pines sound much less attractive than Devil's Island used to be.”

The big young man turned his eyes away from her thoughtfully and pushed back his broad-brimmed hat.

“We prefer to think of it as Little Siberia,” he told her pleasantly. “At Devil's Island there was some small chance of one day getting away. But at Harbour Pinesâ” He shook his head sadly.

The gaiety, the good-natured attempt to impress her with his charms, faded from the rangy young man's sun-browned face and there was an odd, startled look in his eyes. The look of one who has had an unpleasant shock.

“Oh, come now, that's pretty silly,” he protested sharply. “After all, Harbour Pines is scarcely more than a wide place in the road. Believe me, it couldn't possibly support a newspaper. Not even a county weekly.”

His tone made Shelley's head go up.

“I understand there's a very productive naval store acreage there, a couple of business establishments, and that the town draws a nice week-end business from farmers in the vicinity,” she protested.

“Jim here owns the naval stores you're talking about,” the station agent threw in, with the obvious delighted intention of keeping the argument going.

“You own Harbour Pines, are its reason for existence, yet you deliberately discourage new industries?”

Jim grinned and thrust his hat farther back on his head. His hands were jammed in his pockets and now his eyes went over her.

“Well, yes, I reckon you could put it like that,” he drawled. “Matter of fact, the town's resources have been about used up. There's very little chance of any new business operating at a profit and it always hurts our feelings to see people go bankrupt. We're sensitive that way.”

“Well, please don't worry about me,” Shelley told him frostily. “I've no intention of going bankrupt. I bought the
Journal
for an utterly ridiculous price.”

“Why?” Her face felt hot and she knew she was flushing. But she had known from the first that she would have to face this question and that she must answer it without the slightest indication of her hidden purpose, of her jealously guarded secret. “Why, because I've always yearned to run a country weekly. Why else?”

The two men studied her for a space. There was a queer, speculative look in Jim's dark eyes; the station agent was frankly entertained, enjoying this mild break in the dull everyday routine of what must have been an almost unbearably dull job.

Suddenly anger boiled over in Shelley's heart. She was tired. There had been no diner on the train from Atlanta, and she had had nothing to eat since breakfast. She had left New York in the middle of a blinding snowstorm and it had been bitterly cold; yet here the sun was shining so warmly that she felt hot and uncomfortable in her woolen suit and her tweed topcoat. Her nerves broke into angry speech.

“Oh, for goodness' sake, I don't know what all this cross-examination is all about. I'm of age. I'm in full possession of all my faculties. I'm answerable to nobody for my action I've bought a newspaper and all I ask is some way to get to the town so I can get to work on my job.”

Jim and the station agent were unimpressed.

The very fact that it is so hard to get to Harbour
Pines should be sufficient proof that a newspaper published there will have a short and expensive life,” Jim pointed out stubbornly. “Of course, though, if you're just bent and determined to get there, I'll take you. But having lived there most of my life, it's only decent of me to warn you that you aren't going to like it.”

Frosty-eyed, Shelley demanded icily, “How would it be if you just let me worry about that for myself?”

“Right!” Jim yielded, but not too happily. “I'll be about thirty or forty minutes picking up the rest of this junk and then I have a few errands in town.”

“Thanks,” said Shelley, and added, “Is there some place where I could have something to eat while I wait?”

Jim jerked a thumb over his shoulder toward a small, dingy building across the street, the grimy front window of which bore a badly drawn crescent moon and a sign: “Silver Moon CafÃ©: Home of Good Eats.”

Shelley could not repress a shudder.

“There isn't anything better?” she burst out.

“Well, of course it's not exactly Sherry's, or the Ritz, but the food's not as bad as the place threatens. We're too far off the Maine-to-Florida highway to get much tourist traffic. Not much inducement in a town this size to open up a fine eating place for folks who eat out once or twice a year.”

“Thanks. I'll be ready when you are, and thank you for letting me ride with you, Mr.â”

“Hargroves, ma'am,” said Jim with an almost too polite bow.

“I'm Shelley Kimbrough,” she told him, and turned swiftly away.

Behind her, as her heels clicked across the rough
board platform, she heard the murmur of their voices and her ears burned at the station agent's sudden guffaw. But she went on, and into the “Silver Moon,” her head erect, her shoulders back.

The little cafÃ© was surprisingly clean, in contrast to its dingy exterior, and a plump, middle-aged woman in a neat blue house dress and a white apron greeted her pleasantly, as though welcoming a guest into her home, instead of into a business place.

“I reckon you must have missed your train, didn't you, miss? Or was you aimin' to take the bus?” she, asked at last when her curiosity could be contained no longer.

“It was the Harbour Pines bus I missed,” explained Shelley.

Wide-eyed, incredulous, the woman gasped, “
You're
going to Harbour Pines?”

Shelley smothered a little sigh of exasperation. Why was everybody so surprised and so shocked when she admitted her destination? Still, the paper would need advertising if it was to last, and perhaps the “Silver Moon” could be persuaded to list its almost non-existent charms in the paper's columns. So she smiled and made herself friendly and pleasant.

“I've bought the
Harbour Pines Journal
,” she explained. “I hope to make it a very good country weekly, and maybe you would like to advertise with me.”

The woman was startled and a little uneasy.

“Well, now, I don't know. Mostly we don't advertise except in the movie program here and in the county seat paper sometimes. We've been in business
here more'n twenty years and seems like it's right foolish to start advertising now,” she temporized hastily.

Charles Beaumont: Selected Stories by Charles Beaumont
RetroCog (a Power Up! story) by Harte, Marie
Wake Up and Dream by Ian R. MacLeod
Rowboat in a Hurricane by Julie Angus
Satisfying Angela by Erica Storm
My Secret Ninja Lover (Interracial Sex - BWAM) by Sasha Collins
The Lone Warrior by Rossetti, Denise
War Nurse by Sue Reid
Cut Both Ways by Mesrobian,Carrie
Rise of Alpha (The Prodian Journey #1) by Lorenz Font
Our partner