Read The Heaven of Mercury Online

The Heaven of Mercury 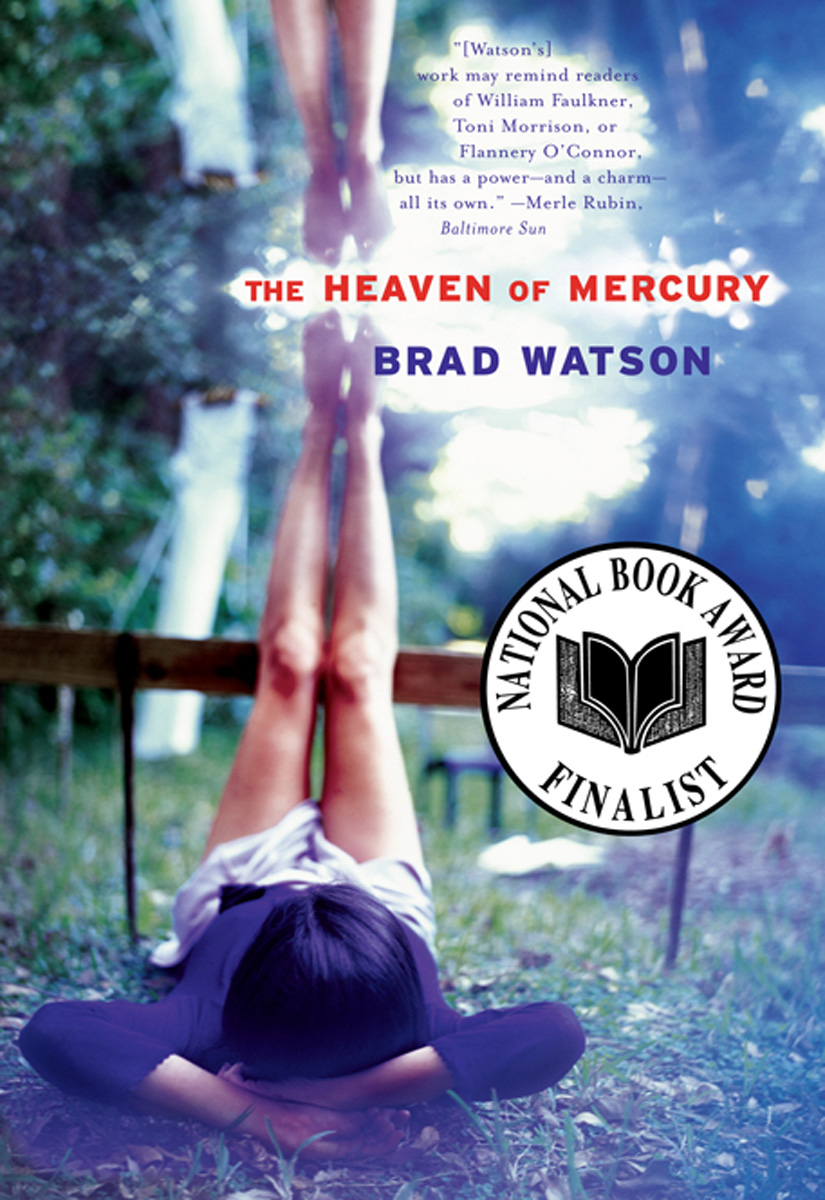 Praise for Brad Watson's
The Heaven of Mercury

FINALIST FOR THE NATIONAL BOOK AWARD

“An intensity reminiscent of Faulkner, a bleak humor that recalls Flannery O'Connor, a whimsy inspired by Eudora Welty and a spontaneity suggesting prime Barry Hannahâ¦. Reading
The Heaven of Mercury
certainly restores one's faith in Southern literature's ability to startle and surpriseâ¦the risks pay off with insightful observations, dynamic relationships and scenes that crackle with tension and possibility.”

“[A] lushly written novel of Deep Southern dream and landscape.”

“A vivid mythology of a small Southern town that moves to a strange, electrifying beat. Think of it as an Irish bluesâ¦as something that goes beyond the literalâand way beyond the pale of most contemporary Southern fiction.”

“Sort of a calm wail. Each page a deep pleasure. A book at life's pace yet somehow without any of its tedium. Only the Irish geniuses wrote like this.”

“
The Heaven of Mercury
possesses as sharp an ear for Southern speech, both black and white, as any novel published in the last 30 yearsâ¦. A superb novel, graced with lush and exciting prose in the Southern high rhetorical tradition.”

“Death, sex, supernatural spells, and bad marriages are among the essential elements for a Southern Gothic novel. But like the masterpieces penned by the writers who developed this celebrated literary tradition, Brad Watson's first novel,
The Heaven of Mercury
, feels anything but formulaicâ¦. Watson's simple, compelling proseâ¦resonates with emotion.”

“As mythic and miraculous as Faulkner and Marquez. Amazingly original, and a sublime delight for the lucky readers who get their hands on it. A novel so fine you don't want it to ever end.”

âLarry Brown, author of
Father and Son
and
Fay

“Thrillingly ambitiousâ¦. Watson does not merely invoke Faulkner and GarcÃ­a MÃ¡rquez, but seems at times to speak straight through them.”

“
The Heaven of Mercury
reads like the love between its two principal characters. The story is ethereal yet comforting, intangible but somehow permanent. It has the necessary components of love, anguish and magic, and it incorporates the dramatic and the unreal. Watson imbues his work with an elegance that sets it apart from the rest.”

“Watson has written a novel at once intimate and epic, magical and realâa dazzling Southern gothic in which love and hate claim equal hold on the human heartâ¦. Slipping easily between heaven and earth, between fanciful dreams and waking nightmares, Watson has given us a bravura performance.
The Heaven of Mercury
is an astonishing novel, one that burns with passion, color, and breathtaking proseâone that cements Brad Watson's place among our great American writers of fiction.”

“The Southern novel, with its ear for the music of words and its delight in off-kilter characters, returns with gale force in the pages of this sparkling debutâ¦. Watson tracks decades in the small town of Mercury, Miss. (based upon his hometown of Meridian), spinning indelible tales and characters with magic, poetry, empathy and sour mash.”

“The best thing to come out of the South since
A Confederacy of Dunces
. I haven't seen or heard such an eloquent flow of just-right words since Odysseus was caught lying to Athena.”

âGregory Rabassa, professor at Queens College, City University of New York, and translator of Gabriel GarcÃ­a MÃ¡rquez's
One Hundred Years of Solitude
and other novels

“A fast-paced, myth-echoing, tragic-comic commentary on our modern lives.”

“A strangely beautiful book that resonates with echoes of William Faulkner and Flannery O'Connor, with mythic touches of Gabriel GarcÃ­a MÃ¡rquez thrown in here and thereâ¦. Watson's writing is lush, earthy, drenched in atmospheric detailâ¦. A strange novel, this oneâstrange and uncommonly fine.”

“
The Heaven of Mercury
is a tragicomic story of missed opportunities and unjust necessities that wittily explores the souls of its highly colorful cast of characters. It is suffused with an almost savage lyricism that illumines every accurate detail and nuance of place and speech. The light this novel casts is so brilliant it makes even its own shadows luminous. Brad Watson has struck a fresh and thrilling note.”

âFred Chappell, author of
Look Back All the Green Valley

“Watson's keen eye for the human condition alone makes
The Heaven of Mercury
a worthwhile read, and you may find yourself accruing a particular type of knowledge that not even Faulkner could impart.”

“What a delectable treat this novel is, on every level. Large-spirited, raucous, darkly comic and comedically dark, and above all, just plain fun, this fable will stay with me the way personal experience stays with meâa wondrous elaboration on the theme of love.”

âRichard Bausch, author of
Someone to Watch over Me

“Lovely, poignant, funny first novel, a book filled with fascinating, unpredictable, original charactersâ¦. Watson has a Faulkneresque understanding of human nature in the employ of an earthy, lively prose style that limns his characters with nuanced sympathy and witâ¦.
The Heaven of Mercury
finally is about love and loss, grief and remembrance, rage and caring. In other words, about the business of living, a subject on which Watson is well worth hearing.”

“How thoroughly Brad Watson understands that emotions have no expiry date and how elegantly he writes about them. Vividly peopled, full of surprises,
The Heaven of Mercury
is a deeply satisfying novel.”

“[A]n unforgettable storyâ¦. The accidents, the disappointments, the corrections, and the secrets each life contains are woven into a deeply sympathetic portrait of small town life at its worst and best.”

A
LSO BY
B
RAD
W
ATSON

Last Days of the Dog-Men

THE
HEAVEN
OF
MERCURY

All rights reserved
First published as a Norton 2003

I'
D LIKE TO
thank the following people and institutions: the Seaside Institute, for a month at Seaside, Florida, where I began this book and had a wonderful time; the American Academy of Arts and Letters; the Great Lakes Colleges Association; the Department of English and American Literature and Language at Harvard University; the Department of English at the University of Alabama; Jack Shank, for his three-volume history of Meridian, Mississippi, which was valuable for facts and information; the staff at the Foley Public Library, for help finding documents about early Baldwin County history; my students, for reminding me of what's important. For reading manuscripts and offering wise advice and encouragement, my enduring gratitude to Helen Vendler, Julie Anne McNary, Kim O'Neil, Karl Iagnemma, Sam Shaw, and Nell Hanley; thanks to David Gessner for urging me to get on with it. Other friends who lent support and encouragement are too numerous to name here, but I am grateful for their many kindnesses. I once again thank the members of my familiesâCollins, Watson, and Nordbergâfor their patience, love, and support, especially Jeanine for infinite patience in addition to the rest. Thanks to Peter Steinberg, of JCA Literary Agency, for sound advice and advocacy. Finally, I'd like to thank Stefanie Diaz, Bill Rusin, Carolyn Sawyer, Ashley Barnes, and everyone else at W. W. Norton & Company; most especially I'd like to thank my editor, Alane Salierno Mason,
sine qua non
.

Although the town of Mercury, Mississippi, in this book bears some resemblance to my hometown, Meridian, I have taken many liberties with regard to historical, geographical, demographic, and other facts. Meridian, Mississippi, is farther from the Gulf coast, is more populous, prosperous, and demographically diverse than the town represented here as Mercury. In a few cases I have used the names of real places as they stand or stood in Meridian, or referred to real historical incidents, but their use here is not meant to represent the facts about them any more or less realistically than they might be represented in an actual dream.

Discussion with the Dummy

Her Remembrance of Awakened Birds

A Pair of Boots

Before Sunrise by Diana Palmer
Dear Olly by Michael Morpurgo
Only The Living (Lost Survival Series Book 1) by Tyne,David
Child Of Music by Mary Burchell
Allegories of the Tarot by Ribken, Annetta, Baylee,Eden
Blown (Elemental Series Book 2) by Rose Wulf
Old Records Never Die by Eric Spitznagel
The Moon Worshippers by Aitor Echevarria
My Secret Unicorn by Linda Chapman
What Happens After Dark by Jasmine Haynes
Our partner