Read The Heavens Are Empty: Discovering the Lost Town of Trochenbrod Online

The Heavens Are Empty: Discovering the Lost Town of Trochenbrod 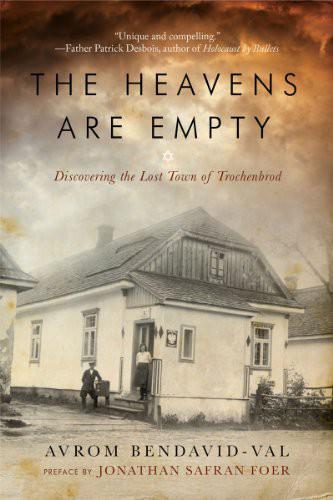 THE HEAVENS ARE EMPTY

THE HEAVENS ARE EMPTY

Discovering the Lost Town of Trochenbrod

My brothers have reached the far shore,

I alone remain on the water, mid way,

I was late, thought I could hurry and reach the other side.

But then, night fell.

And who knows how long until day.

The ground where I stand is like the froth on the water.

I see a little star,

A sparkling from far away.

My brothers are sending greetings to me.

Their flame burns there on the other side.

This poem, originally in Yiddish, was found among newspaper clippings that Yonteleh Beider had saved. It was written by his brother and probably published around 1939 in
Podlaiyisher Tzeitung
(the Podlayisher Newspaper), in Mezerich, Poland, where he was living at the time. The
Podlayisher Tzeitung
published many Yiddish poems by Yisrael Beider
.

This book is dedicated to my father, YomTov (Yonteleh) Beider from Trochenbrod. He went to Palestine in 1932, changed his name to Chagai Bendavid, immigrated to the United States in 1939, and died thirty years later in Washington, D.C. He mentioned Trochenbrod infrequently, yet his longing and affection for it were unmistakable. The memory of that affection impelled me to find a way to stand where that mysterious place was, to try to feel the soul of it, and inspired the years of research that led to this book
.

Chagai Bendavid is the one holding the cigarette in this photo of a construction crew in Tel Aviv, in 1934
.

Preface
Next Year in Trochenbrod
by Jonathan Safran Foer

Introduction
The Back Story

Chapter One
The First Hundred Years

Chapter Two
Between the Wars

I
f the Diaspora could be run backward, if Jewish history, itself, could be funneled and compressed into a single location—some place that captured the vibrancy and catastrophe, the yearning, invention and destruction—we might find ourselves in Trochenbrod. The more I’ve learned about the singular shtetl—and the great portion of my knowledge comes from the book in your hands—the more strongly I feel that it was the most special place ever to have existed.

In 2002, I contributed my novel,
Everything is Illuminated
, to the small and diverse library of books devoted to Trochenbrod. It is a highly fictionalized response to a trip I made, as a twenty-year-old student, in an effort to find the woman who saved my grandfather, Louis Safran, from the Nazis. The book was an experiential, rather than historical, record of Trochenbrod. Or perhaps it’s more accurate to say it was a deeply personal expression of one young man’s experience in his destroyed ancestral homeland.

The Heavens are Empty
is the definitive history of this definitive place. If this book feels more fantastical than my novel, or than any novel you’ve ever read, it is because of Trochenbrod’s ingenuity, the Holocaust’s ferocity, and Bendavid-Val’s heroic research and pitch-perfect storytelling. This rigorously journalistic book reads at times like science fiction, at times like magical realism, at times like a thriller, and always like a tragedy. You might find yourself crying most at the parts that aren’t sad.

Jews conclude the Passover
seder
—the recounting of the Exodus from Egypt, and perpetually relevant movement toward freedom—with the words, “Next year in Jerusalem.” It’s an odd statement, as most of us who live outside of Jerusalem could, if we wanted, be in Jerusalem this year. We are not there because we choose not to be.

But the statement does not refer to a Jerusalem that can be found on a map; it refers to an idea. Next year in a place of redemption, a place where the shards of creation are gathered together and we are more like the stories we tell ourselves about ourselves.

Trochenbrod will never be redeemed, and we will never, next year, be there. The dead cannot be brought back to life, the buildings cannot rise from the earth. The Diaspora cannot be run backward. And yet here we are, readers of this book, citizens of that place.

Trochenbrod was the most special place ever to have existed. Not
was
…
is
.

T
here once was a town called Trochenbrod in what today is western Ukraine. It had dozens of businesses of all kinds, and people would travel from all around to shop, work, and sell there. Trochenbrod had a post office, a police station, a fire brigade, a cultural center, schools, and everything you’d expect in a small but lively town. It’s gone now. A trail for tractors and horse-drawn wagons through empty land is all that remains of the once bustling street that ran through the town.

My father never described his home town (pronounced TRAW-khen-brawd) to me; and I, growing up in 1950s and ’60s America, never thought to ask. Yet every once in a while my father would happen to mention it, and when he did, he said “Trochenbrod” with a tone that conveyed longing, loving remembrance, and sadness, but he also said it with a slight twist of his mouth, a sort of half smile that hinted at “a funny little place.” After he was gone, all I knew of Trochenbrod was the sense of it that my father had conveyed by his way of saying the name. Relatives told me that Trochenbrod no longer existed, but that had no meaning for me. I had never seen proof that it once existed, any more than I had seen proof that it no longer existed. Trochenbrod was only a vague shadow in my imagination, so how could it no longer exist?

Trochenbrod suddenly stopped being only a shadow in my imagination when for forgotten reasons I found myself in a Mormon family research center, decided to search for Trochenbrod, and discovered my first factual representation of it in print: its coordinates 50º55′21.68″ north, 25º42′07.54″ east. Under the coordinates was an explanation that the town had many Jews; was known by two names, Trochenbrod and Sofiyovka; and was completely destroyed in the Holocaust. Instantly it was real: a place that really once was, and that really is no more. It had two names, so it couldn’t have been just a no-place, I supposed. What might still be there? There had to be at least some signs of buildings that once were there, at those coordinates.

Thoughts like these floated occasionally around the edges of my consciousness as I went about my career in economic development in poor countries, until one day working in Warsaw I realized that where Trochenbrod had been situated was just over the border and a bit south in Ukraine. Visiting it should not be too difficult. Why not do it? The year was 1997. I found my way to the phone number of a young man in Lviv who was beginning to build a business of genealogical research for Jewish families and was willing to serve as a guide, translator, and driver for people like me. We talked over the terms and agreed on date for a trip to find Trochenbrod in November of that year.

The young man’s name was Alexander Dunai. About ten years later Alex was described with great affection by another customer-become-friend, Daniel Mendelsohn, in his book,
The Lost
:
A Search for Six of Six Million
. Alex helped Daniel visit a small town in Ukraine where members of his family had lived and were murdered, and to research what happened there, during some of the time when he was also helping me.

To prepare for the trip I visited the Library of Congress. There I found, among other things, a Russian map from the late 1800s, and with the help of the coordinates I was able to locate Trochenbrod on it. The map was delicately drawn. When I photocopied the area around Trochenbrod in larger scale I could see the town’s outline and the trails running through it; it was almost like having an aerial photograph of Trochenbrod. I quickly walked outside the august building so I could let go a shout of excitement. Pieces were falling into place. I couldn’t wait to get to Ukraine.

My brother Marvin and I, with a copy of the map in hand, landed in the small and quirky Soviet-era airport for the city of Lviv, beautifully modeled after an old-fashioned railroad station. Known as Lvov in earlier days, Lviv is the de facto capital of western Ukraine. We were met by our jovial and slightly rotund Alex with his faithful Lada—the USSR’s version of a 1972 Fiat. We looked around Lviv a bit and then headed off on the ninety-five-mile drive northeast to the city of Lutsk. Ukraine was in its early post-Communist period: no ATMs; no regular gas stations on intercity roads; no reliable hot water; and other than in a few places in the major cities, no decent restaurants and no credit cards accepted. The roads were in terrible condition and the faces of most buildings were heavily scarred by Communist crumble. In the city, signs of poverty could be seen everywhere—signs like little more than the basics for sale in the streets and on nearly barren store shelves; shabbily-clothed people shuffling about in worn-out shoes with mostly struggle and deep worry etched on their faces; and all manner of shysters and thieves swarming about trying to get their hands on your money. The rural areas, with their rudimentary horse-drawn wagons; animals running about; decrepit houses with water wells, outhouses, and wood-and-tar-paper sheds; haystacks everywhere; streets of mud; and people bent over in the fields using primitive farm tools seemed not to have changed since at least the turn of the last century.