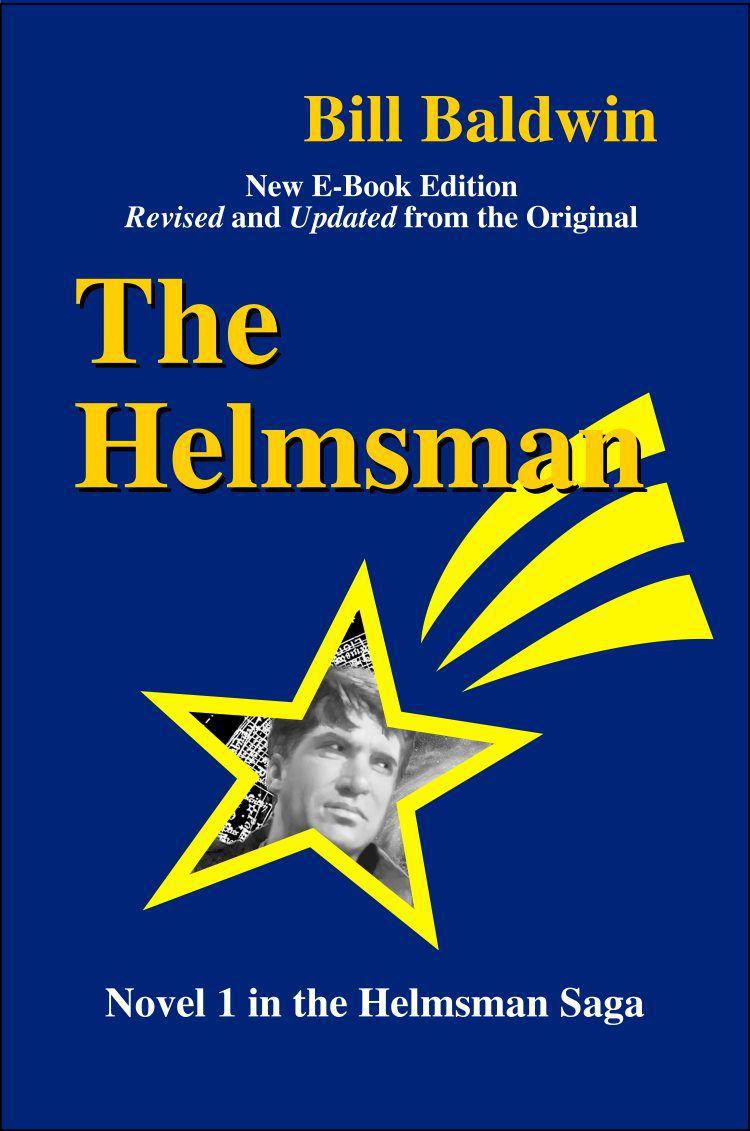 Revised and updated from the original

All rights reserved, worldwide. No part of this publication may be reproduced, stored in a retrieval system, or transmitted in any form or by any means, electronic, mechanical, recording or otherwise, without the prior written permission of the author.

Revised and updated from the original

For more info, and to ask Bill questions, visit:

Only three travelers shambled from the coach at Gimmas’ badly lighted Eorean station. Two of them disappeared into the ozone-pungent darkness even before the train's warning lights were out of sight along the causeway. Alone on the platform, Sublieutenant Wilf Brim, Imperial Fleet, dialed his blue Fleet Cloak's heating element control another notch toward “warm,” then clambered down the wet metal steps from the elevated tracks. The whole Universe seemed dismally cold around him as he reached the landing. He listened to wind moaning through the station shelter while he oriented himself, then picked his way around ice-crusted puddles barely visible beneath infrequent Karlsson lamps and started out toward the dim shape of a distant guard shack. He was shamefully aware of the single traveling case following him. It fairly shouted his humble origins, and he was joining an Imperial Fleet once commanded exclusively by wealth-privileged officers — until First Star Lord Sir Beorn Wyrood's recent Admiralty Reform Act (and six years of war's insatiable attrition) forced inclusion of talent from whatever source it could be obtained.

Shivering despite the warm, high-collared cloak, he peered at the predawn sky. Enough light from the star Haefdon now filtered through the clouds to disclose the fundamentals of sprawling Gimmas/Haefdon Fleet Base: Lines of low, gray-painted buildings, a world of dissected starships, and forests of shipyard cranes stationary against a starless sky. Along the waterfront, indistinct shapes of more or less intact vessels hovered quietly on softly glowing gravity pools while the outlines of others projected above covered wharves and warehouses, all a uniform shade of weather-faded gray relieved occasionally by stains of oxidation or charring. In the distance, mountainous forms of capital ships dominated a lightening horizon from still another complex. Brim shook his head bitterly. Fat chance for a Carescrian Helmsman aboard one of
those
!

He stretched to his nearly six-iral height and yawned in the clammy dampness. The sky was now spitting snow occasionally, with a promise of more substantial amounts soon to come. He sniffed the air, sampling the odor of the sea as it mixed with ozone, heated lubricants, and the stench of overheated logics. At best, the Eorean Starwharves – one of fifteen starship construction-and-maintenance complexes on the watery planet of star bases called Haefdon – could accurately be described as an untidy sprawl. To the twenty-one-year-old Brim, it was far more than that: it was also the realization of a dream that only recently seemed impossible. His fellow cadets (and many sullen instructors) quietly did their utmost to make it thus, and prevent his recent graduation from the prestigious Helmsman’s Academy near the Imperial capital planet, Avalon. He somehow had prevailed, determined he could raise himself from the grinding poverty of his home in the Empire’s Carescrian Mining Sector. A combination of fierce tenacity, hard work, and native talent finally won him his commissioning ceremonies and this lonely outpost in the Galactic Fleet. He counted on those same attributes to take him a great deal farther before he traded in his blue Fleet Cloak – a lot farther indeed.

Picking his way carefully over a series of glowing metal tracks that paralleled a high fence, he stopped at the gate house to rap on the window and rouse its single, nodding occupant. Inside, the ancient watchman wore age-tarnished medals from some long-forgotten space campaign. He was tall with thin shoulders and enormous hands, a beak of a nose, sparse white hair, and the sad eyes of a man who had seen too many Wilf Brims enter through his gate and never return. “A bit early,” he observed, opening the window no more than a crack to admit the other's proffered orders card, while denying passage to as much of the cold wind as he could manage. “First ship, I'll wager,” he said.

Brim smiled. Metacycles ago at the massive Central Terminus of Gimmas/Haefdon Fleet Base, he had indeed conceded the remainder of his sleep to excitement and anticipation. “Yes,” he admitted. “In a way, at least.”

“Well, you're not the original early riser, young man,” the watchman chuckled, “nor I suppose the last, either. Bring yourself in here while I try to find where you belong. And don't open the door more'n you must!” While Brim parked the traveling case and made his way into the pungent warmth of the shack, the old campaigner placed his orders card in the side of a battered communications cabinet (which also doubled as storage for six cracked and stained teacups, none particularly clean). Presently, a shimmering display globe materialized over the crockery. He studied the contents. “Hmm. All the way from Carescria,” he observed without looking around. “Caught in the League’s big sneak attack, I suppose?”

Brim only nodded to the man's back. “Lose anybody?”

Brim shut his eyes. Did people
have
to ask? All he personally wanted was a chance to forget. Even after six years, the war's sudden onset was as real as the night before. Wave after wave of heavy cruisers from Emperor Nergol Triannic's League of Dark Stars attacking Carecria’s famous asteroid fields; he’d been on home leave in the ramshackle orbiting “city” where his parents lived.” Concussion. Agonizing heat — his tiny sister's last, anguished screams. He shook his head. “Everyone,” he whispered almost to himself, “everyone except me.”

“It's all right,” Brim interrupted dully. “Forget it.”

Neither occupant found more words until the old man broke his silence with another pregnant “Hmm.” He scratched his head. “T.83, eh?” Apparently, this needed no answer, for he continued moving age-spotted fingers over his small control panel, concentrating on rapidly changing patterns in the globe. Finally, he looked up to consult a large three-dimensional map tacked above a ragged chair. Tracing a long finger along the causeway, he stopped near the image of a tiny, fenced-in square. “You're here, now, d' you see?” he asked.

“All right, then,” the watchman continued. “Now let me think, G-31 at, ah…” He peered nearsightedly at the globe again without moving the finger. “Oh, yes, G-31 at B-19.” Now he continued across the map until he stopped at a basin carved into a far corner of the island. “B-19,” he announced. “Your
Truculent's
moored here, Carescrian. On the gravity pool numbered R-2134. D' you see?”

Brim squinted at the map near the man's black fingernail. A tiny “R-2134” was just visible printed inside one of seven rectangular gravity pools bordering the circular basin. “I see it, all right,” he said.

“Bit of a distance on foot,” the old man observed, stroking his thin, stubbled chin. “First skimmers from the transport pool won't run for another metacycle or so, and I can't imagine the ship'll send one of their own. You're not even signed aboard as a crew member yet.”

Brim snorted. He knew what the watchman
really
meant – that they wouldn't send a skimmer for a no-account Carescrian. He'd been here before, often. The old man smiled sympathetically. “I
can
offer you a spot of tea to warm your stomach until then, if you'd care to have a seat.”

“Thanks just the same,” Brim said, making his way toward the door. “But I think I'll walk off some of this excitement before I try to check in.” He nodded. “R-2134. I'll find it.”

“Thought you might do something like that,” the old man observed. “You'll get there with no trouble. Just keep the set of blue tracks on your left. Snow won't stay on 'em.”

Brim nodded his thanks and stepped quickly into the cold, summoning the traveling case to his heel. A thickening carpet of snow lay over the still-sleeping complex, already hiding much of the unsightly dockyard clutter beneath a mantle of white. Carefully keeping the blue-glowing tracks on his left, he made his way along a dark concourse, noting that his pace curiously increased as soon as he cleared the gate. While he hurried along the rough pavement, he asked himself if it was the cold that made him hurry so — or was it the excitement?

On either side of the road, powerful forms of warships loomed through the falling snow, hovering ponderously over shallow gravity pools, dimly lit from beneath by the glow of shipyard gravity generators. Those near the water were often lighted. On a few, he saw occasional crew members performing routine poolside duties (cursing both their superiors and the snow, he guessed with a smile). The signs of life made him feel less alone in the sprawling confusion of hulls, KA'PPA masts, and ubiquitous cranes which now crowded the lightening sky.

Other ships — those grotesquely damaged or undergoing dissection for repair — hovered like metallic corpses over inland gravity pools half hidden by stacks of hullmetal plates and heavy shipbuilding equipment. Brim shuddered as he passed one particularly savaged wreck. On the convoy from Avalon he helplessly watched one of the escorts, an old destroyer named
Obstinate,
take a HyperTorp hit amidships. She had blown up with all hands. That crew would have deemed themselves fortunate indeed to bring her back to base at all, even in
this
condition! He shook his head; everything in the Universe
was
relative, as they said.