Read The Hero's Guide to Being an Outlaw Online

The Hero's Guide to Being an Outlaw 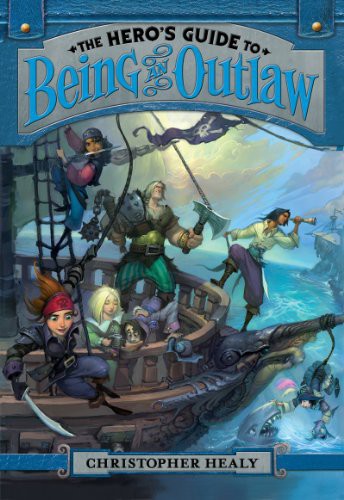 To Charlotte, Jonah, Jenn, and Stu

PART I: ON THE RUN

1.
An Outlaw Is Never Around When You Need One

2.
An Outlaw Faints at the Sight of Blood

4.
An Outlaw Feels No Pain

5.
An Outlaw Listens to His Dad

6.
An Outlaw Cries for Help

7.
An Outlaw Gets Nuts

10.
An Outlaw Smells Something Fishy

11.
An Outlaw Squats Where He Shouldn’t

PART II: OUT TO SEA

14.
An Outlaw Learns the Ropes

15.
An Outlaw Does Something Rash

16.
An Outlaw Rocks the Boat

17.
An Outlaw Speaks Politely to a Lady

19.
An Outlaw Boats to the Rock

20.
An Outlaw Forgets to Pack a Change of Clothes

PART III: IN THE SLAMMER

22.
An Outlaw Doesn’t Know What Kind of Bird She Is

23.
An Outlaw Talks All Proper-Like

24.
An Outlaw Needs a Good Stylist

25.
An Outlaw Uses Her Head

PART IV: AFTER THE TRUTH

27.
An Outlaw Hits the Books

29.
An Outlaw Spins the Bottle

30.
An Outlaw Cleans His Plate

31.
An Outlaw Takes the Low Road

33.
An Outlaw Has Excellent People Skills

34.
An Outlaw Can Save Your Kingdom

PART V: ON THE ATTACK

35.
An Outlaw Is Speechless

36.
An Outlaw Hangs Out with a Bad Crowd

37.
An Outlaw Is Not Speechless

38.
An Outlaw Storms the Castle

39.
An Outlaw Catches Up with Old Friends

O
utlaws have too many feathers in their hats.

Outlaws are allergic to seafood.

Oh, and outlaws are people who are hunted down because they have been accused of terrible crimes.

Okay, I suppose it’s possible you knew that last bit already. But if so, then you may be wondering, “What’s with all the outlaw stuff? This is a book about the League of Princes, right? Those guys are
heroes
. Or at least hero-
ish
.”

And after reading the first two books of this series (which might be a good idea before you go any further with this one), yes, you’d have every reason to assume that the famed Princes Charming—Liam, Frederic, Duncan, and Gustav—would always stand firmly on the right side of the law. First they saved their kingdoms from a vengeful witch, and then they stormed a castle to snatch a dangerously powerful magic item out of the hands of the Bandit King. These princes are definitely good guys.

And yet, in this book, they become outlaws. In fact, it was only a few months after the aforementioned castle storming that the entire League found their faces on Wanted posters all across the Thirteen Kingdoms.

Before you start crying “Spoiler!” let me point out that you would have found out about the whole Wanted poster thing in Chapter 4 anyway. And seriously, the title of the book kind of gives it away, doesn’t it? If I wanted to give you a real spoiler, I would have mentioned the fiasco that occurs in Chapter 16—Frederic struggling for air beneath pounding ocean waves, Gustav struggling to pry open the powerful jaws of a sea serpent, Liam struggling to locate his friends amid the bobbing wreckage of their ship, and Duncan struggling to remove his head from a bucket of chum.

But let’s not get distracted. Because that whole shipwreck nightmare never would have happened if the Princes Charming hadn’t managed to get themselves branded as outlaws. And
that
would never have happened if they’d actually managed to succeed in their mission when they stormed the Bandit King’s castle. But, no, they’d walked away from that mission without even realizing they’d failed. Come, let’s go back to Prince Frederic’s kingdom of Harmonia, and I’ll show you what I mean.

King Wilberforce was in a foul mood, as he had been ever since Prince Frederic had stormed out of the palace months earlier. His son had never lashed out at him like that before. And to think it was simply because he had banished his son’s fiancée. What choice did he have? Ella was a bad influence. He couldn’t even keep track of how many times she had nearly gotten Frederic killed. Exiling the girl was what any good father would have done.

At least that’s what Wilberforce told himself as he sat on his velvet-cushioned throne grumbling in a positively unkingly manner. Apparently forgetting his rule that “a proper man never fidgets,” he absentmindedly fiddled with the dozens of glistening medals that adorned his finely tailored purple jacket. His normally stiff, right-angled shoulders began to dip into a position that came dangerously close to resembling a slump.

“Your Highness?” asked the tall, thin, well-mannered man standing before the throne. “I mean no disrespect, but I feel the need to remind you that I am . . . here. Unless, of course, you summoned me only so that you would have someone at whom you could grunt. In which case, by all means, Your Highness—grunt away.”

“I don’t understand the boy,” Wilberforce said, half mumbling. “You’re his valet, Reginald. You know him better than anyone. Why would he go? What’s wrong with him?”

“Perhaps part of the problem, Your Highness, is that you refer to him as ‘the boy,’” Reginald said. “Frederic is a grown man.”

“Who acts like a boy,” the king responded. “Why would he feel a need to go off in search of
adventure
?” He snarled the word as if it were a curse. Before Reginald could respond, the king rambled on. “Do I not provide enough entertainment here at the palace? We hold royal balls every other week. Banquets! Bard concerts! Frederic never even stopped by the royal art gallery to see the new series of cat portraits I commissioned for him. One of them shows a kitten in a hammock; Frederic loves that sort of thing.”

“Perhaps, sire,” Reginald finally interjected, “the prince was looking for more of a challenge.”

“Challenge?” The king pshawed. “As if that boy could handle a challenge. He’s got no backbone, no determination, no drive. Why, I gave him a custom-made backgammon set last year. After
one try
, he whined that it was too hard to play.”

“To be fair, Your Highness, I believe his difficulty with the game was due to the
round dice
you forced him to use. They never stopped rolling.”

Wilberforce arched an eyebrow. “You expected me to give my son those pointy-edged, cube-style dice? He’d lose an eye.”

“Well, if you are going to be such a stickler for safety, why not give him dice the size of honeydews,” Reginald said dryly. While he technically served the king, his loyalty lay with the prince he’d practically raised from birth. “After all, regular-size dice are a dangerous choking hazard.”

“You’re being cheeky with me, aren’t you, Reginald?”

“I would never dream of it, Your Highness. Look at all those medals on your chest: Best Posture, Team Solitaire Champion, Silkiest Mustache. I have nothing but the utmost respect for a monarch with so many . . .
amazing
accomplishments to his credit.”

“Cheek!” Wilberforce bellowed. “Cheeeeeek!” He stood and pointed toward the exit, his arm as stiff as a road sign. “I want you out, Reginald. Leave at once.”

“The room?” Reginald asked. “Or the palace?”

“The kingdom then. As you wish.” Reginald bowed his head. “Someday I hope you realize that just because your wife died as an adventurer doesn’t mean your son will, too. You need to let Frederic make his own choices. Otherwise you will only drive him further away.” He turned and walked out.

Wilberforce leaned forward in his throne. “If you find Frederic out there . . .” But Reginald was already gone. The king slouched back in his seat and added—to no one—“Take care of him.”

He unpinned one of the medals from his jacket and took a look at it.
WINNER: CRUSTIEST LOAF, HARMONIAN BAKE FAIR.
He tossed the award angrily to the floor and went back to brooding. Sometime later, the door opened and Wilberforce quickly straightened up as an attendant stepped in.

“Sorry to disturb you, Your Highness,” the attendant said. “But there’s someone here to see you.”

“Your visitor? Um, he’s got some friends with him,” the attendant began.

“Yes, of course, I should have figured he’d still be traveling with those ne’er-do-wells,” the king said hurriedly. “But we’ll deal with them later. Just get the boy in here.”

The attendant scrambled from the throne room. Wilberforce worked his face into a welcoming smile, almost trembling as he waited. But a moment later, he frowned and cocked a quizzical eyebrow as his visitor entered the chamber. It was not Frederic. It was a tall, broad-shouldered, scar-faced man with some sort of monstrous skull sitting on his head like a helmet. And he had ten more equally questionable characters standing behind him, all brandishing nicked, battle-worn swords.

King Wilberforce shrank back. “Who . . . who are you?” he whispered.

“I am Rundark, Warlord of Dar and ruler of New Dar,” said the stranger. His thick, braided beard rattled against his armored chest as he spoke. “And I am here to make an offer to the king of Harmonia.”

Now, if Frederic had been there, he certainly would have warned his father about Lord Rundark, the vicious and brutal dictator who had nearly destroyed the League of Princes that past summer. Frederic could have told his father about the Jeopardous Jade Djinn Gem, the mystical artifact that gave Rundark the power to control people like human puppets. He might even have mentioned how Rundark—and the Gem along with him—were supposed to have been swallowed by a school of hungry bladejaw eels. But at that moment, when Frederic could have been very, very helpful to his father, he was many miles away, passing out at the sight of a hobgoblin with a splinter in its toe.