The Hidden Diary of Marie Antoinette 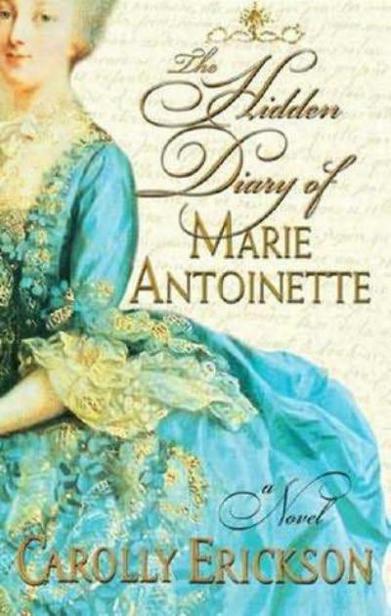 THE HIDDEN DIARY OF MARIE ANTOINETTE.
Copyright © 2005 by Carolly Erickson. All rights reserved. Printed in the United States of America. No part of this book may be used or reproduced in any manner whatsoever without written permission except in the case of brief quotations embodied in critical articles or reviews. For information, address St. Martin’s Press, 175 Fifth Avenue, New York, N.Y. 10010.

It takes three or four chops to sever the head. Sometimes the poor wretches scream horribly, for a full minute, before their agony is ended with a single massive blow.

They say the amount of blood is remarkable. Streaming, cascading out, thick and dark red, more blood than you would imagine a person had in him. The heart goes on pumping it out, pulse after pulse, after the head is cut off.

The executioner walks proudly to the edge of the scaffold, holding up the bleeding head, the eyes staring in surprise, the mouth open in a silent cry. And as he walks, he is drenched in the gushing blood.

My husband had a lot of blood, they tell me. He was such a large, heavy man, strong and tough as an ox. A man of the outdoors, with a workman’s big, competent hands. It would have taken more than one slice of the blade to kill him.

They wouldn’t let me watch him die. I know I could have given him strength at the end, if only I had been there with him. We went through so much together, Louis and I, right up until the day they came for him and took him away from me. He didn’t try to resist, that day when they came, the mayor and the others, to take him away. He merely called for his coat and hat and followed them. I never saw him again.

I know he died well. They say he was calm and dignified, reading the psalms on the way to the open square where the huge machine with its slicing blade awaited him. I am told he ignored all the shouts and cries from the crowd, and did not look for rescue, though there were those who would gladly have saved him if they could. He undressed himself and opened the collar of his shirt and knelt to offer his neck to the blade, refusing to let them bind his hands like a common criminal.

At the end he tried to say that he was innocent but they drowned him out with the noise of drums and rushed to drop the heavy blade.

That was nine months ago. Now they will be coming for me, their former queen, Marie Antoinette, now known as Prisoner 280.

I don’t know when it will be, but soon. I can tell by Rosalie’s face when she brings me my soup and lime-flower water. She has given up hope that I will be spared.

At least they let me write in this journal. They will not let me knit or sew, because of the pointed needles—as if I had the strength to stab anyone!—but I am allowed to write, and my guards cannot read so what I write remains private. Rosalie can read some but she is discreet, she will not betray me.

Writing helps me to forget this horrible dark little airless room in which I am confined, that stinks of rot and mildew and human waste. This awful cold and damp, my wet shoes and sore leg that throbs now more than ever, despite the linament that Rosalie rubs on it. The coarse guards that watch me and the others that stand outside my door, joking about me and laughing. The hard, cold cot I lie on at night, unable to sleep, crying my heart out over my son, my little chou d’amour, Louis-Charles. Or as I must call him now, King Louis XVII.

Oh, if only I could still see him! My dearest child, my little boy-king.

Until last August I saw him nearly every day, if I stood at the window of my old cell long enough. The horrible old ruffian who guards him, Antoine Simon, took him past my cell on his way to walk in the courtyard for exercise, making gross jokes and teaching him to sing the Marseillaise.

Poor Louis-Charles, only eight years old, losing the father he loved and now deprived of his mother too. How I fought when they came to take him away from me. It took them nearly an hour. I would not let go of him, I yelled and threatened them. In the end I begged them, sobbing, not to take him from me. It was only when they said that they would kill both my children that I relented.

What will they do to my boy? Poison him? Or worse, turn him into a little revolutionary, make him believe their lies. They will try to deny him his royal heritage, of course. No kings for them! And no queens either. Only Citoyen Capet and Veuve Capet, and our son Louis-Charles Capet, citizen of the French Republic.

And what of my Mousseline, my Marie-Thérèse, my lovely daughter, only fourteen, so young. Far too young to be an orphan. I miss her, I miss all my children. Poor little Sophie, my baby, who was never well and who only lived a year. And my dearest Louis-Joseph, my firstborn, the poor crippled one, never strong, in his grave at Meudon. How many tears have I shed for him, for them all.

I know that I suffer from an excess of emotion. It is because I am unwell, and because they give me so much lime-flower water and ether to drink. I do not have enough strength to keep my composure. I live on soup and bread, and I have become very thin. Rosalie has had to alter both my gowns to make them smaller. I bleed so much, and so often, that I know something is wrong, though they will not let me see a doctor.

I am tired and full of tears and blood, but still I have not given up. In the messages Rosalie slips under my plate of soup,
messages I read when I sit on the chamber pot, partly hidden from my guards by a screen, there is much hopeful news. The armies of Austria and Prussia are coming nearer, they are winning battle after battle against the rabble revolutionary forces. The Swedish may yet send a fleet to invade Normandy. Peasant armies in the Vendée—oh, thank heaven for the ever faithful Vendéans!—are fighting to restore the throne.

It may yet happen, and I may live to see it. Paris may come under attack, and the revolution may be destroyed. My Louis-Charles may yet sit on his father’s throne.

I am weary, I can write no more. But I can read, until they come for me. I can read this journal, the only thing I have left from my youth. I like to reread it, to relive those happier times, before I learned how cruel the world can be. Before I became Queen Marie Antoinette, when I was simply Archduchess Antonia, living at the court of my dear mother Empress Maria Theresa in Vienna. With all my life ahead of me . . .

My name is Archduchess Maria Antonia, called Antoinette, and I am thirteen years and seven months old, and this is the record of my life.

Writing in this journal is my punishment. Father Kunibert, my confessor, has told me to write down all my sins in this journal so that I may reflect on them and pray for forgiveness.

“Write!” he said, pushing the book toward me, his thick white eyebrows going up, making him look ferocious.

“Write what you have done! Confess!”

“But I have done nothing wrong,” I tell him.

“Write it down. Then we will see. Put there everything you did, starting with last Friday. And leave nothing out!”

Very well, I will put down in this book all that I did on the day I went to see Josepha, and what happened afterward, and then I will show Father Kunibert what I have written and make my confession.

Tomorrow I will begin.

It is very hard and sad to write what happened, because I am so very sorry that my sister was in such pain. I tried to tell Father
Kunibert this, but he just opened the journal and handed me the box of sharpened quills. He is a hard man, as Carlotta says. He does not listen to explanations.

On Friday morning, then, this is what I did.

I borrowed a plain black cloak and hood from my maid Sophie, and put a silver crucifix around my neck such as the Sisters of Mercy wear. I prepared a basket with fresh loaves and a ripe cheese and some strawberries from the palace garden. Without telling Sophie or anyone else where I was going, I went at night to the old abandoned stables where I was sure my sister Josepha was being kept.

Josepha had been missing for a week, ever since she became hot with fever and began to cough. No one would tell me where she was, so I had to find out by asking the servants. Servants know everything that happens in the palace, even what goes on between the master and mistress in the privacy of their bedroom. I found out from Eric, the stable boy who grooms my riding horse Lysander that there was a sick girl in the basement of the old riding school. He had seen the Sisters of Mercy going there at night, and once he saw our court physician Dr. Van Swieten go in and come out again very quickly, holding a handkerchief over his mouth and looking very pale.

Quiver: Watched by Shadows (Quivering Shadows Book 2) by Rook, Livia
Shadowheart by Tad Williams
BRANDED BY A CALLAHAN by TINA LEONARD
When They Come for Us, We'll Be Gone: The Epic Struggle to Save Soviet Jewry by Gal Beckerman
Tinker Bell: Secret of the Wings Junior Novel by Disney Book Group
Muse - Fighting Fate #1 by Green, Maree
A Civil War by Claudio Pavone
13 Things That Don't Make Sense by Michael Brooks
Moss Hysteria by Kate Collins
Forever & an Engine by C. J. Fallowfield
Our partner