The Higher Power of Lucky 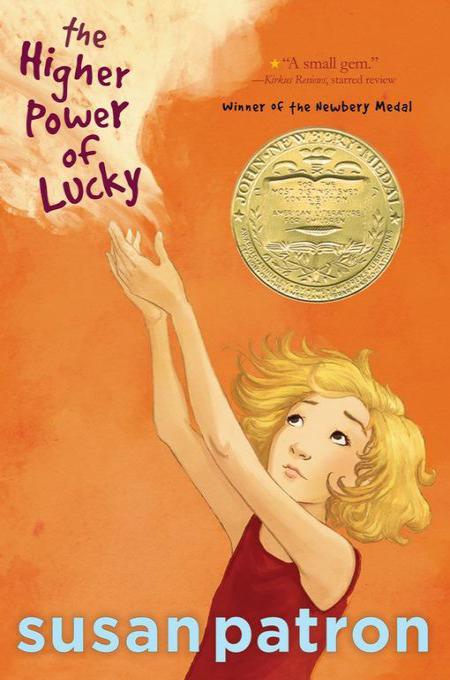 The illustrations for this book are rendered in pen and ink and pencil.

Summary: Fearing that her legal guardian plans to abandon her to return to France, ten-year-old aspiring scientist Lucky Trimble determines to run away while also continuing to seek the Higher Power that will bring stability to her life.

16.
Getting Ready to Run Away

Lucky Trimble crouched in a wedge of shade behind the Dumpster. Her ear near a hole in the paint-chipped wall of Hard Pan’s Found Object Wind Chime Museum and Visitor Center, she listened as Short Sammy told the story of how he hit rock bottom. How he quit drinking and found his Higher Power. Short Sammy’s story, of all the rock-bottom stories Lucky had heard at twelve-step anonymous meetings—alcoholics, gamblers, smokers, and overeaters—was still her favorite.

Sammy told of the day when he had drunk half a gallon of rum listening to Johnny Cash all morning in his parked ’62 Cadillac, then fallen out of the car when he saw a rattlesnake on the passenger seat biting his dog, Roy, on the scrotum.

Lucky balanced herself with a hand above the little hole that Short Sammy’s voice was coming out of. With her other hand, she lifted the way-too-curly hair off her neck. She noticed two small black birds nearby, panting like dogs from the heat, their beaks open, their feathers puffed up. She put her ear to the hole because Sammy’s voice always got low and soft when he came to the tragical end of the story.

But Short Sammy didn’t head right to the good part. To stretch it out and get more suspense going for the big ending, he veered off and told about the old days when he was broke and couldn’t afford to buy rum, so he made homemade liquor from cereal box raisins and any kind of fruit he could scrounge up. This was the usual roundabout way he talked, and Lucky had noticed that it made people stay interested, even if the story got quite a bit longer than if someone else had been telling it.

She stood up, her neck and the backs of her knees sweating, and mashed wads of hair up under the edges of her floppy hat. She carefully angled an old lawn chair with frayed webbing into her wedge of shade, and made sure the chair wouldn’t break by easing herself onto it. Flies came, the little biting ones; she fanned them away with her plastic dustpan. Heat blasted off the Dumpster.

There was a little silence, except for the wobbly ticking noise of the ceiling fan inside and people shifting in their folding metal chairs. She was pretty sure they had already heard the story of Short Sammy hitting rock bottom before, as she had, and that they loved the pure glory and splendiferousness of it as much as she did—even though it was hard to imagine Short Sammy being drunk. Short Sammy’s voice sounded like it could barely stand to say what came next.

“That Roy, man,” said Sammy, who called everyone “man,” even people like Lucky who were not men. “He was one brave dog. He killed that snake even though it bit him in the place where it hurts the worst for a male. And there I am, trying to get away, falling out of the Cad. I break a tooth, I cut my cheek, I give myself a black eye, I even sprain my ankle, but I’m so drunk, man, I don’t even know I’m messed up—not till much later. Then I pass out.

“Next day I wake up on the ground, sand in my mouth, and it feels like death. I mean, it’s like I
died
, man, but at the same time, like I’m too sick and ashamed to be dead. There’s a mangled rattlesnake under the car, there’s blood, lots of blood—I don’t even know if it’s my blood or Roy’s or the snake’s. Roy’s gone. I call him—nothing. I figure maybe after saving my stupid life he went off to die alone somewhere. It’s probably like a hundred degrees in the shade, man, about as hot as it is now, but I’m so cold I can’t stop shivering.”

Lucky’s hands smelled metallic, like the thin arms of the lawn chair; they felt sticky. She pushed her hat back from her forehead; air cooled the sweat there.

“I make this deal with myself,” Sammy continued. “The deal is if Roy is okay I’ll quit drinking, join AA, get clean.”

Lucky edged her bare leg away from a rough, poking strand of chair webbing. Each time Short Sammy came to this part in his story, Lucky thought of what kind of deal
she
would make with
her
self if she hit rock bottom. Like, let’s say she didn’t know if her dog, HMS Beagle, was alive or dead; she would have to do something really hard and drastic as her end of the bargain. Or, let’s say that her Guardian just gave up and quit because Lucky did something terrible. The difference between a Guardian and an actual mom is that a mom can’t resign. A mom has the job for life. But a Guardian like Brigitte could probably just say, “Well, that’s about it for
this
job. I’m going back to France now.
Au revoir
.” There poor Lucky would be, standing alone in the kitchen trailer, at rock bottom. Then she would have to search for her own Higher Power and do a fearless and searching moral inventory of herself, just like Short Sammy and all the other anonymous people had had to do.

Short Sammy went on, “Then my wife drives up. Man, I didn’t even know she’d gone. I’m still kind of laying there on the ground. She gets out of her car, but she doesn’t say one word about how messed up I am.

“All she says is, ‘I took Roy to the vet’s in Sierra City.’ She’s talking real calm, almost like she’s not mad or anything. She says, ‘Fifty miles from here, and I drove it in, like, maybe half an hour. That was the worst drive of my life, Sammy, thanks to you. But Roy’s okay because I got him there in time for the antivenom to work.’

There was clapping, and Lucky knew that pretty soon they would pass a hat around for people to put money in. It was a little disappointing that today nobody had explained how exactly they had found their Higher Power, which was what Lucky was mainly interested in finding out about.

She didn’t get why finding it was so
hard
. The anonymous people often talked about getting control of their lives through their Higher Power. Being ten and a half, Lucky felt like she had no control over her life—partly because she wasn’t grown up yet—but that if she found her Higher Power it would guide her in the right direction.

Chairs scraped as everyone stood up. Now they would all say a little prayer together, which Lucky liked because there was no church or synagogue or anything in Hard Pan, California, so the Found Object Wind Chime Museum and Visitor Center was the closest they got to one. That meant the end of the meeting and time for her to disappear quick. She’d finished her job of clearing trash from the patio in front—smashed beer cans and candy wrappers from yesterday’s Gamblers Anonymous meeting. It wasn’t likely that anyone would be coming back to the Dumpster behind the museum, but someone
might
. She had to hurry, but she had to hurry
slowly
, in order not to make a sound.

She stashed her dustpan and rake beside the wall and left the aluminum lawn chair hidden behind the Dumpster. Tomorrow, Saturday, would be her day off. Then on Sunday afternoon, before the Smokers Anonymous meeting, she would again clean up the museum’s little patio. The patio was where the anonymous people sat around talking after their meetings. All the anonymous people left lots of litter, and each group could not bear to see the butts or the cans or the candy wrappers of the group that met before it. The reason was that they were in recovery. The recovering alcoholics hated to see or smell beer cans left by the recovering smokers and gamblers; the recovering smokers could not stand cigarette butts left by the recovering drinkers, and the recovering overeaters hated to see candy wrappers left by the recovering drinkers, smokers, and gamblers. Which meant that Lucky had a job—a great job—and except for Dot’s kitchen-and-back-porch Baubles ’n’ Beauty Salon and the Captain’s mail-sorting job at the post office, it was the only
paying
job in town.

Nowhere to Run by C. J. Box
Yellow Crocus by Ibrahim, Laila
His Firm Hand by Shelly Douglas
Animalistic Galley Fin by Lizzie Lynn Lee
The Road to Reckoning by Robert Lautner
The Forbidden Room 01 - The Forbidden Room by J P Barnaby
A Good Guy With A Gun by Steven Friedman
Land of Careful Shadows by Suzanne Chazin
At the Corner of King Street by Mary Ellen Taylor
The Panty Whisperer: The Complete Series by Sloane Howell
Our partner