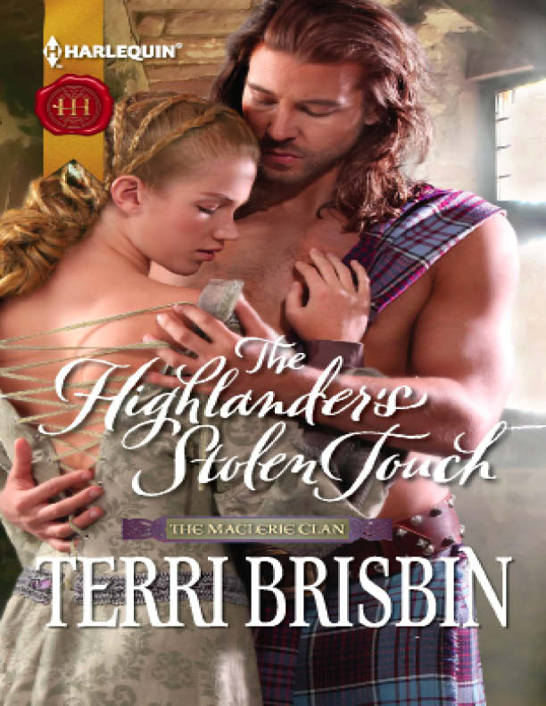 Ciara Robertson has loved formidable Highlander Tavis MacLerie all her life. She watched, brokenhearted, while he married and lost another. Now,
finally
of marriageable age, Ciara throws her heart at his feet....

Tavis knows that innocent Ciara thinks she’s in love with him—but she deserves better. Painful experience has proved that he’s a far better warrior than husband, and he’s determined never to marry again.

Her dreams shattered, Ciara accepts another man’s hand. Ordered to take Ciara to her husband-to-be, Tavis is tormented—and tempted—every step of the way....

There was an instant when he knew he should stop and simply return her to the house, when he knew they should talk more in the cool light of the morn. But that moment passed by so quickly it did not hinder his next action at all. Tavis pulled her back into his arms, tilted her head with his hand and leaned his mouth to hers.

He kissed her, and all his good intentions to show simple compassion were tossed asunder at the first touch of his mouth on hers.

Not as a beginning, as her husband-to-be had, but as an ending—because her place, her life, would be here and not with him.

THE MERCENARY’S BRIDE
“Brisbin’s latest Knights of Brittany book
is just as thrilling and passionate as the rest.
Brisbin excels at immersing readers in history
and bringing her characters to life.”
—
RT Book Reviews

THE CONQUEROR’S LADY
“Riveting with its rich narrative,
pulsing sexual tension and chilling suspense.
It’s a tale of a man of passion, action and heat, and the innocent beauty who conquers him body and soul.”
—
RT Book Reviews

TAMING THE HIGHLANDER
“
Taming the Highlander
is a lively, frolicking tale
of life in the Highlands; truly a must-read.”
—
Historical Romance Writers

And in Harlequin Historical
Undone!
ebook:

*
A Night for Her Pleasure

What the Duchess Wants

*The Knights of Brittany
†The MacLerie Clan

This book is dedicated to my editor, Anna Boatman, for all of her guidance, advice and gentle prodding in making this story the lovely romance it is now!

Ciara whispered it to her nearest and dearest friend, knowing her secret wish was safe with her. The terrible words branded her as a person of the most horrible kind. Nine years of age and already beyond redemption. She sighed, knowing it was true.

The young woman, the current object of their observation, saw nothing but the man waiting for her at the door to the chapel. She looked neither left nor right, making Ciara hate her even more. The only thing worse was that he gazed back at her with the same intensity. Her own heart hurt then, understanding that she was witnessing love.

‘Should we trip her?’ Elizabeth whispered back. Ever her stalwart friend, she would see this through with Ciara.

The puddle of mud to one side of the path was appealing, but Ciara shook her head. From the way Tavis gazed at Saraid, he would look at her the same way even if she was covered in the slime and muck. Ciara’s breath caught at the strength and clarity of the feelings between Tavis and his soon-to-be wife. Later, when someone asked her what love was, she would describe it as just that—the expression Ciara could see in Tavis’s eyes when he looked at his bride.

‘Nay,’ she whispered, turning away as tears filled her eyes. ‘Leave her be.’

Elizabeth looked from her to the couple, now walking together into the chapel, and sighed. ‘What will you do, then?’

Ciara shrugged and did not answer right away. The doors to the chapel remained open and, if she’d cared to watch, she could have seen the whole ceremony as Tavis and Saraid promised to love and cherish each other for life. But she walked away and sought out her favourite thinking place, leaving her friend behind to sigh and watch the wedding she could not.

She could wait for her chance to love Tavis and to gain his love.

And so she did.

In spite of his marriage, Tavis still welcomed her company and their unusual friendship continued. As she gained in years and in knowledge, she was present many times when Tavis would report to her stepfather, the clan’s Peacemaker, after carrying out some task for him. Tavis walked her back to her family’s cottage after one such journey and Ciara tried to show what she’d learned only that week.

‘Cogito, ergo sum,’
she said with confidence. Latin was one of the languages she loved and she was, as her tutor had told her parents, quite proficient in it. She waited for Tavis to react, but he simply laughed and shrugged.

‘I do not ken Latin,’ Tavis said. ‘Unlike you, I have only the
Gàidhlig
and some
Scots.
Oh, and a bit of the
English.
’ From his tone, she did not think him insulted by her knowledge or embarrassed by his lack of it.

‘I could teach you some of the words,’ she offered. ‘Or to read.’ She was his friend and she wanted to help him however she could. Even now at ten-and-three years, she could at least do that for him.

‘There are other ways you should be spending your time, lass,’ he said, winking at her as he spoke.

Her mother had been speaking, or rather complaining, to him again. She sighed and looked away. Most likely bemoaning that she did not take her needlework as seriously as she did her study of languages or numbers or...well, not seriously at all.

‘I hate needlework,’ she said, crossing her arms over her chest and lifting her chin. Surely he would not take her mother’s side of it?

‘Ah,’ he said softly, while taking her hand in his. ‘Needlework is a worthy task and a needed skill. Along with numbers, speaking your five languages and reading a few more than that.’ He tugged her hand and they continued their walk towards her home.

‘If ’tis such a worthy skill, why do you not learn it?’ she asked, irreverently. Shrugging off his hold on her, she waited for his answer.

Oh, aye, she understood the different roles of men and women. But as she was exposed to more and more knowledge and experiences by her father, she doubted she could ever simply return to the constricted life expected of a young woman in her time and place. Did her father know that by allowing her education to surpass other girls her age, he was creating a need within her to learn more and more? Since Tavis was still a man, she waited for his rebuff of her challenge.

‘I can already sew, lass. Many warriors have need of it after a battle. Needlework is no different than that,’ he answered as they arrived outside her parents’ cottage.

Then he offered her the most beautiful, most irritating, aggravating smile, the one that told her he was certain he would be victorious over her in this matter. Ciara wanted to stomp her foot and scream. Of all the things she thought safe to challenge him on, why did it have to be that? While still considering what to say next, he reached over and lifted her chin so he could look at her as he spoke.

‘My sister Bradana and Saraid are both skilled at it,’ he began. Glancing over his shoulder at her door, he leaned in and whispered, ‘And both softer taskmasters than your mother. Though you should never tell her I said such a thing.’ He released her and stepped back, motioning towards her home. ‘I can speak to either of them about it, if you wish?’

How had this happened? She had manoeuvred herself right into doing the one thing she most wished to avoid. All by trying to show off her skills to her friend. Without uttering a word of surrender, she just nodded and walked away. Ciara almost reached the door when he called out to her.

‘I will tell Saraid to expect you on the morrow.’

Ciara did stomp her foot then and slammed the door behind her as she pushed inside, making it rattle the frame on which it was hung. Tavis’s laughter echoed outside as he walked away.

As much as she’d like to ignore his offer and refuse to practise sewing and embroidery, Ciara could not. This was another instance of him guiding her to the right choice. She let out an exasperated sigh and walked into her room. Her gaze went right to the collection of wooden animals that sat on her mantel. Tavis had been her friend forever, or at least since she’d been only five years and he came with her stepfather to bring her to Lairig Dubh—her new home and new family.

Though she never wanted to admit he belonged with someone else, watching him with his wife had given her a glimpse at true love. Just as her parents’ marriage was a love match, Tavis and Saraid’s was as well, even she could see it now. And just as Tavis would do anything to make Saraid happy, so she would do for him—even if it meant becoming proficient with a needle and thread.

Ciara showed up at Saraid’s door the next day and on many other days, too. Sometimes she remained after her lessons to help the young woman. Sometimes, may God forgive her weak character, she remained only to see Tavis. Saraid, for her part, seemed to understand that Ciara was important to her husband and accepted her presence and help. Tavis approved and Ciara found herself drawn into friendship with Saraid. With younger siblings, Ciara was familiar with being the oldest sister, but with Saraid, she felt like the younger one, for they were nearer in age than Ciara was to Tavis.

Over the next few years, Ciara grew in her knowledge and skills until her father allowed her to assist him in his work for the laird. But the kinship that developed between her and Tavis’s wife was torn apart when Saraid died and a distance grew between Ciara and Tavis, too.

As close as they’d been, nothing Ciara said or did mattered to or helped Tavis in his grief. Some time passed before he seemed at ease with her again, but the recognition that she was growing up and reaching adulthood changed things between them. Tavis began taking on more and more duties and travelled on the laird’s business almost as an escape, she thought, from having to face the village alone and to avoid the now-empty cottage where he lived.

Ciara continued to excel in her studies and her father allowed her to accompany him and to read his contracts and documents, leaving her little time for needlework or other womanly skills. And that suited her just fine. By that time, Tavis’s attentions were focused solely on his duties to the laird and anything she did went unnoticed by him.

And still she waited.

Presumed Guilty: (A Jefferson Winter novella) by James Carol
The Caryatids by Bruce Sterling
The Lamorna Wink by Martha Grimes
Inevitable by Heiner, Tamara Hart
It's Always The Pretty Ones by Howard, Vonda
The House Sitter by Peter Lovesey
Read Between the Lines by Jo Knowles
You First by Cari Simmons
Indigo Squad by Tim C. Taylor
Jacquot and the Waterman by Martin O'Brien
Our partner