The Hollow Ground: A Novel 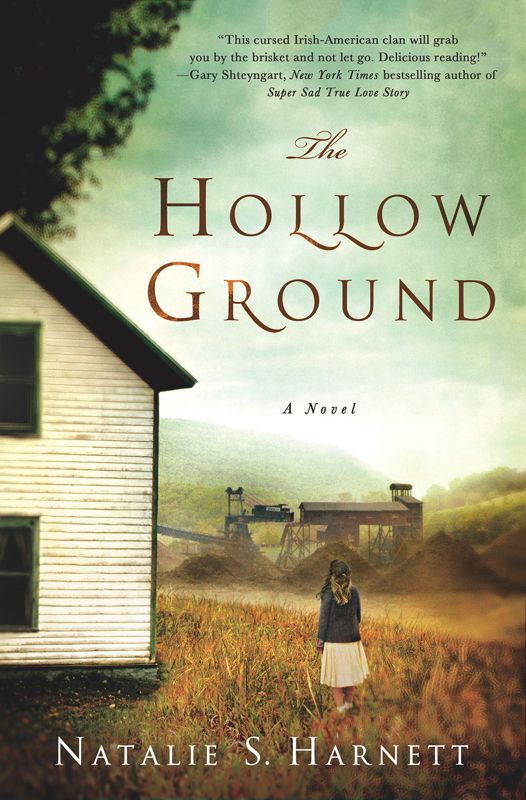 My family went above and beyond to make this book happen. From endless support, to back rubs and babysitting—Mom, Dad, Erik, Chris—you never faltered.

For your generosity and faith, thank you, David Gates. Rebecca Goldstein, your encouragement over the years brightened them. Tad Friend, you’ve been so kind.

A thousand thank-yous to Toni Kirkpatrick for loving it!!! And for making this such a wonderful experience. Giant hug to Kent D. Wolf—awesome reader, dream maker—you
believed.

So many friends helped to get me here: Ezra Cappell, Grace Cantwell, Val Matheson, Anne Foley, and, of course, my reading lab ladies. I’m forever grateful to Jerry Hughes’s countless and careful readings. I’m also grateful to the Carbondale Historical Society and Museum, the Lackawanna Historical Society, and the Lackawanna Coal Mine Tour. I could not have done this without Chris’s and my mother’s research, readings, edits, and love.

To the waters and the wild

With a faery, hand in hand,

For the world’s more full of weeping than you can understand.

We walk on fire or air, so Daddy liked to say. Basement floors too hot to touch. Steaming green lawns in the dead of winter. Sinkholes, quick and sudden, plunging open at your feet.

Where the hollowed out ground didn’t burn, it collapsed or sank. Here is what’s known as the Anthracite Coal Region of Pennsylvania, fed by the largest vein of anthracite coal in the world. That coal was blasted, hauled, breathed, and swallowed by our daddies’ daddies and by theirs before them. And when those mines shut down, those snaking, black tunnels were left to flood—to shift. They were left to burn.

Burning more than coal, I’d tell you. When I was still curled and wet in my ma’s belly, those mines burned my memory. Burned me with the want to see them for myself. To enter their long, sloping darkness and know what my daddy went through before whatever it was got broke inside him.

I’m not saying I knew what I’d uncover when I crawled and scraped my way into that narrow monkey shaft. I’m not saying I knew the secrets I freed from there would change us permanently for worse or better. I’m just saying that sometimes what we seek is something we hope, with all our blood and bone, we’ll never find.

When Ma was seven years old her heart turned sour. She said it never turned sweet again, but I remember a time, long before the mine fires burned beneath our towns, when Ma’s eyes glowed like sunlit honey, when her voice rose and fell as pleasantly as a trickling creek. While Brother was swelling up Ma’s belly, or flailing around in the crib, or crawling on the brown linoleum of the trailer over by Mercher’s Dump, we were happy. The thing that changed Ma wasn’t there. But I remember the moment it arrived. Me and Ma were playing tiddlywinks at the kitchen table. Daddy was still in bed, watching us from his cot in the living room and telling a story about the tiddlywinks queen and princess. Back then I was so young and stupid I thought all daddies slept that way, separate from the rest of us, dozing till noon. Brother scribbled chalk on the kitchen floor, trying his best to make that cruddy linoleum look pretty.

Through the kitchen window came this light, the color of swallowtail or goldfinch wings. I’ve never seen a light like that again. It felt like it shot through the slats of my ribs, searing me with a kind of happiness maybe all kids feel ’cause they don’t know any better. But then deep in Brother’s plump little throat formed this squeal of delight. Within seconds he was up, standing all on his own, and charging toward us with his first steps.

Ma turned, spreading her arms, cooing like a mourning dove. But when he fell into her, sobs shot from her mouth like the fire itself had flamed up through the floor and singed the skin from her bones. I lunged from my chair and pulled the baby from her arms, thinking he’d hurt her. Which I guess he did. Because right then her eyes went from liquidy amber to the scratchy dull color of sassafras bark. Her voice ever afterward bobbed with nettles.

Whenever I reminded Ma of this moment, she said her heart forgot it was broken but then remembered. How can you make it forget again? I’d ask. Over and over, I’d ask. But her mouth merely pressed into that tight squiggle that made me think of the worms I dug up for fishing. The worms still lived after you cut a piece of them off. I guess that’s how it was for Ma. A piece of her was gone and for a little while she forgot about it.

When I woke that February morning, the morning that changed our lives, the pinkish air pushing in the opened window told of snow. I snuggled closer underneath the covers toward Auntie and pictured the mine fire flaming along the veins of coal beneath our town, veins as numerous and intricate as the blue ones on Auntie’s legs. The fire lived by sucking air through the ground and burping up gases through our walls. I sucked in and blew out to see my breath form a cloud, which made me think of the Holy Ghost. A white blob was how I pictured Him, a white blob hovering over the apostles’ heads before burning them all with tongues of flame.

Auntie used to say the flames gave the apostles more than the gift of language, the flames gave them understanding. I thought if that was true, perhaps the fire eating the underground mine shafts of Centrereach was trying to tell me something—to give me its own kind of wisdom. I’m Brigid, named after Saint Brigid, who was named, some say, after the pagan goddess of fire. A saint who made the sores of a leper disappear. Smoothed the cracks in a madman’s mind. A healer, like Auntie, though Auntie never allowed anyone to call her a healer. Something healed
through
her, she said, explaining that she was something like a messenger.

Groaning, Auntie sat up. She reached for a mug of water on the nightstand and with a spoon tapped at the film of ice that had formed during the night.

Auntie took a sip from her mug, wincing at the sting of the cold water on her teeth. Slowly she shuffled to the closet where she stretched to unhook the shaggy bathrobe that hung on the door. As she slipped into the robe, a hidden smile tugged at the sides of her mouth. The story of “The Great Forgetting” was one of my favorites and Auntie savored the retelling of a town in the Carpathian Mountains where the people had been pillaged for so many centuries that they knew no joy.

Tugging the belt snug on her robe, Auntie spoke and as she did the white hairs on her chin glistened in the dresser lamp’s light: “They prayed for years to forget the past until they no longer believed God listened. Then one day the youngest child in the village awoke to find a perfectly round egg in his crib. Word spread of this marvel. Within hours, the villagers forgot everything—not only their grief, but the curves of their beloved’s face, their children’s names. They stumbled through the streets, meeting neighbors, childhood friends, their very own father or mother, as if meeting that person for the first time. Their only memory was of the babe finding the oddly shaped egg. ‘Don’t hurt the child,’ a big fat shiny black crow squawked.”

Auntie bent her arms like wings and flapped them. We both smiled in pleasure. Auntie loved telling the story and the way she spoke I loved to listen. When Auntie came to America as a little girl, her grammar school trained the Ukrainian accent out of her, a different kind of forgetting. But if you listened carefully you could still hear the sounds of her first language lilting her words.

Auntie dropped her arms and continued: “But as soon as the snows melted, the healthiest of the young men carried the tot to a mountain crag. There, they left him to die and by the following dawn marauders conquered the village, slaying every person, young or old. Now only the story of what happened to the town remains.”

Auntie touched one of the colorful wooden icons on her dresser top and made the sign of the cross backwards. Auntie was Great-uncle’s wife and we loved her, but she wasn’t raised Catholic. Daddy said that wasn’t her fault because the place she was born was so horrible even God left it. But Auntie said her hometown in the Ukraine was a Garden of Eden until an iron curtain closed around it, making it impossible to go back. “They say home is where the heart is,” Auntie often said. “That means I’ll never see my heart again.”

While Auntie rummaged in her top drawer for the heavy woolens she wore under her housedress, I charged out from the covers, reaching for my red woolen coat on the chair. Slipping into it, I waited for the magic of its heat as I stood by the window watching the early morning twilight give way to dawn. In the distance, hovering above the fields, was a mist that I imagined was the ghost of the family curse coming to get us, even though I knew the mist was caused by the fire burning beneath the ground. Thinking of ghosts made me think again of the Holy Ghost with its tongues of flame and I quivered with excitement at the thought that something important might happen that day.

Once the chill was off my skin, I crossed the hall to Brother’s room. Brother’s little body nestled cocoonlike under Auntie’s brown and lime green granny-square afghan. With his back to the wall, his pink mouth sucking the cold air, Brother’s slender Ma face had a kind of sweetness to it that only little kids get.

“Come on,” I said, kicking at the mattress. “Take off your pajamas and put on clean underwear. Then put on your clothes.” If you didn’t tell him exactly what to do, it was your own fault when he screwed it up. We’d all learned that lesson.

I handed him fresh clothes, then shuffled to the opposite end of the hall to peer into Ma and Daddy’s room. Ma and Daddy slept with their backs to each other, aimed for escape, exactly the way all Howleys sleep. This, I thought, was Auntie’s magic. Before we moved in with her, Ma and Daddy never slept together. But as soon as Auntie invited us to move in, she started brewing a remedy to sneak into Ma’s and Daddy’s morning coffee. Within weeks they started not only sleeping together, but eating together too.

Head cocked, I listened until I was certain I heard Ma’s breezy sighs in between Daddy’s rasps. Then I rushed down the hall to pound on Brother’s door. “It’s Saturday, stupid,” I growled. “My favorite day. If you mess with me, I’ll let you-know-who into your bedroom tonight.”