Read The House in Amalfi Online

The House in Amalfi 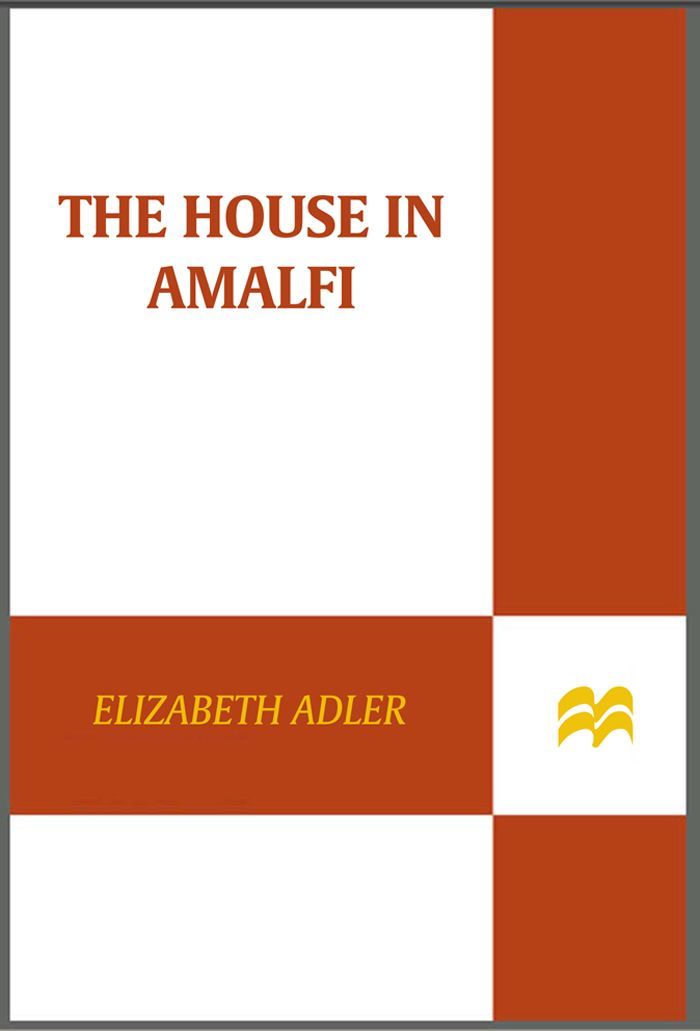 PRAISE FOR THE ENCHANTING NOVELS
OF BESTSELLING AUTHOR ELIZABETH ADLER

The House in Amalfi

“Adler is known for her skill in describing place, and she exceeds all expectations in [the] detailing of Rome and Amalfi in her newest novel. Adler captures villages, gardens, houses, and everyday life, all to the reader’s vast enjoyment . . . her language is deft and graceful . . . the magic in Adler’s novels resides not only in place, but also in the stories she weaves. And her romances are not just between men and women, they are between reader and landscape. Here the atmosphere is so lush gardens grow from the page, her descriptions are so beautiful and clear that one could wander her cities with only this book as the map, and so evocative that the reader feels that he or she has also eaten pizza in a tiny café, and watched fishermen unload their catch.”

“Adler . . . once again brings a far-flung locale to life with escapist flair, taking the reader—along with the questing heroine—on a trip to the coast of southern Italy . . . the novel engages with a light story and luscious descriptions of food and scenery.”

“Adler’s awesome talent for descriptive prose transports the reader to the lush beauty of the Amalfi coast in this beautiful tale of secrets, heartbreak, hope, and love. Adler’s eye for detail, intricate plotting, and remarkable, believable characters make her stories a true gift to the reader. Magnificent!”

“Adler excels in this genre, which includes her previous novels
The Last Time I Saw Paris
and
Invitation to Provence
.”

“Adler’s descriptions are so lush, so lyrical, you can almost smell the salt of the ocean, taste the dark, acrid sweetness of a good cappuccino. Her gorgeous imagery of Rome makes you want to pack your bags and go! It gets even better when she gets to the Amalfi seaside, with the house tucked into the cliffs, the boats bobbing on a sparkling blue sea, and the scent of lemons everywhere.”

“A deft hand in creating characters to cheer for and settings to dream over in this deeply appealing story of love, family, and the beauty of Italy.”

“The tiny, sun-baked village of Bella Piacere is the stuff of dreams . . . [a] dramatic tale . . . sumptuous backdrop and colorful cast of characters . . . a delightful escape.”

“The beauty and rich culture of Tuscany form a wonderfully romantic and compelling backdrop for this delightful novel. Ms. Adler’s characters are complex and riveting, making this another must-read novel.”

The Last Time I Saw Paris

“A wonderful voyage depicting one woman’s struggle to regain her sense of self-worth and identity . . . Adler always excels at bringing vivid and lifelike characters into being.”

“The popular Adler gets the dynamics of a new relationship pitch-perfect . . . But it’s the detailed, realistic description of the trip to France . . . that makes her latest great vicarious vacation reading.”

“Outward adventures lead to an inward journey of self-discovery.”

“Cushy as an ermine throw, smooth as a ride in a chauffeur-driven Bentley, bubbly as Veuve Clicquot, this latest treat from Adler makes murder, thwarted passion, and inheritance disputes delightful.”

“Adler is a household name to fans of romantic suspense.”

“Entertaining. Lust, greed, and murder keep readers on their toes. Adler is expert at digging deep into her characters’ psyches and showing what makes them tick. Her villain here is wonderfully portrayed—as are all the other characters in this well-plotted, entertaining work.”

“Spellbinding. Adler is a true genius.”

“Gifted storyteller Elizabeth Adler proves once again why she is truly a master of sweeping, intense, and dramatic novels.”

The Last Time I Saw Paris

T
he
H
ouse in
A
malfi

This is a work of fiction. All of the characters, organizations and events portrayed in this novel are either products of the author’s imagination or are used fictitiously.

THE HOUSE IN AMALFI

All rights reserved. No part of this book may be used or reproduced in any manner whatsoever without written permission except in the case of brief quotations embodied in critical articles or reviews. For information address St. Martin’s Press, 175 Fifth Avenue, New York, NY 10010.

For my lovely Red and dearest Jerry—
who do
not
appear in this book!

Life is granted to no man on a permanent basis. It is a privilege, and we must use our time wisely. It is up to each of us to make of it what we can.