Read The House of the Seven Gables Online

The House of the Seven Gables 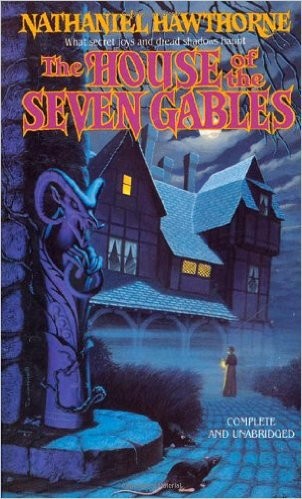 The House of the
Seven Gables

When a writer calls his work a Romance, it need hardly be observed that he wishes to claim a certain latitude, both as to its fashion and material, which he would not have felt himself entitled to assume had he professed to be writing a Novel. The latter form of composition is presumed to aim at a very minute fidelity, not merely to the possible, but to the probable and ordinary course of man's experience. The former—while, as a work of art, it must rigidly subject itself to laws, and while it sins unpardonably so far as it may swerve aside from the truth of the human heart—has fairly a right to present that truth under circumstances, to a great extent, of the writer's own choosing or creation. If he think fit, also, he may so manage his atmospherical medium as to bring out or mellow the lights and deepen and enrich the shadows of the picture. He will be wise, no doubt, to make a very moderate use of the privileges here stated, and, especially, to mingle the Marvelous rather as a slight, delicate, and evanescent flavor, than as any portion of the actual substance of the dish offered to the public. He can hardly be said, however, to commit a literary crime even if he disregard this caution. In the present work, the author has proposed to himself—but with what success, fortunately, it is not for him to judge—to keep undeviatingly within his immunities. The point of view in which this tale comes under the Romantic definition lies in the attempt to connect a bygone time with the very present that is flitting away from us. It is a legend prolonging itself, from an epoch now gray in the distance, down into our own broad daylight, and bringing along with it some of its legendary mist, which the reader, according to his pleasure, may either disregard, or allow it to float almost imperceptibly about the characters and events for the sake of a picturesque effect. The narrative, it may be, is woven of so humble a texture as to require this advantage, and, at the same time, to render it the more difficult of attainment. Many writers lay very great stress upon some definite moral purpose, at which they profess to aim their works. Not to be deficient in this particular, the author has provided himself with a moral,—the truth, namely, that the wrong-doing of one generation lives into the successive ones, and, divesting itself of every temporary advantage, becomes a pure and uncontrollable mischief; and he would feel it a singular gratification if this romance might effectually convince mankind—or, indeed, any one man—of the folly of tumbling down an avalanche of ill-gotten gold, or real estate, on the heads of an unfortunate posterity, thereby to maim and crush them, until the accumulated mass shall be scattered abroad in its original atoms. In good faith, however, he is not sufficiently imaginative to flatter himself with the slightest hope of this kind. When romances do really teach anything, or produce any effective operation, it is usually through a far more subtile process than the ostensible one. The author has considered it hardly worth his while, therefore, relentlessly to impale the story with its moral as with an iron rod,—or, rather, as by sticking a pin through a butterfly, —thus at once depriving it of life, and causing it to stiffen in an ungainly and unnatural attitude. A high truth, indeed, fairly, finely, and skilfully wrought out, brightening at every step, and crowning the final development of a work of fiction, may add an artistic glory, but is never any truer, and seldom any more evident, at the last page than at the first. The reader may perhaps choose to assign an actual locality to the imaginary events of this narrative. If permitted by the historical connection,—which, though slight, was essential to his plan,—the author would very willingly have avoided anything of this nature. Not to speak of other objections, it exposes the romance to an inflexible and exceedingly dangerous species of criticism, by bringing his fancy-pictures almost into positive contact with the realities of the moment. It has been no part of his object, however, to describe local manners, nor in any way to meddle with the characteristics of a community for whom he cherishes a proper respect and a natural regard. He trusts not to be considered as unpardonably offending by laying out a street that infringes upon nobody's private rights, and appropriating a lot of land which had no visible owner, and building a house of materials long in use for constructing castles in the air. The personages of the tale—though they give themselves out to be of ancient stability and considerable prominence—are really of the author's own making, or at all events, of his own mixing; their virtues can shed no lustre, nor their defects redound, in the remotest degree, to the discredit of the venerable town of which they profess to be inhabitants. He would be glad, there fore, if-especially in the quarter to which he alludes-the book may be read strictly as a Romance, having a great deal more to do with the clouds overhead than with any portion of the actual soil of the County of Essex.