Read The House of Thunder Online

The House of Thunder 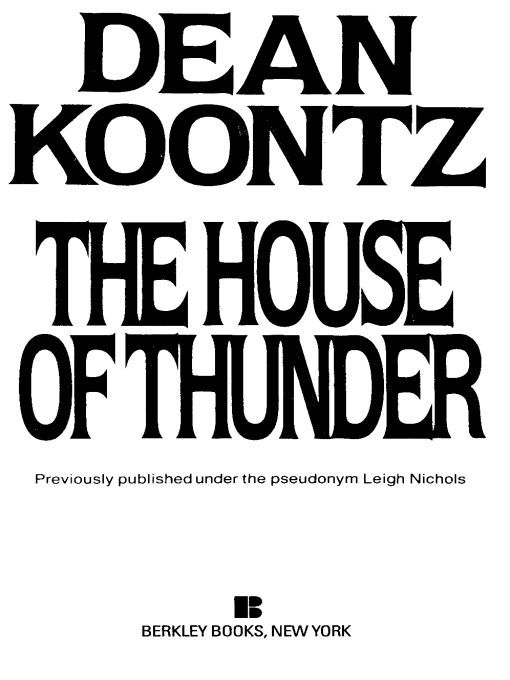 Table of Contents
Title Page
Copyright Page
Dedication
PART ONE - Fear Comes Quietly...
Chapter 1
Chapter 2
Chapter 3
Chapter 4
Chapter 5
Chapter 6
PART TWO - Opening the Curtain ...
Chapter 7
Chapter 8
Chapter 9
Chapter 10
Chapter 11
Chapter 12
Chapter 13
PART THREE - Going Into Town...
Chapter 14
Chapter 15
Chapter 16
Chapter 17
The acclaimed bestsellers by
Dean Koontz
THE EYES OF DARKNESS
“Koontz puts his readers through the emotional wringer!” -The Associated Press
THE KEY TO MIDNIGHT
“A master storyteller... always riveting.”
—The San Diego Union-Tribune
MR. MURDER
“A truly harrowing tale... superb work by a master at the top of his form.”
-The Washington Post Book World
THE FUNHOUSE
“Koontz is a terrific what-if storyteller.”
-People
DRAGON TEARS
“A razor-sharp, nonstop, suspenseful story... a first-rate literary experience.”
-The San Diego Union-Tribune
SHADOWFIRES
“His prose mesmerizes... Koontz consistently hits the bull’s-eye.”
-Arkansas
Democrat
HIDEAWAY
“Not just a thriller but a meditation on the nature of good and evil.”
-Lexington Herald-Leader
COLD FIRE
“An extraordinary piece of fiction... It will be a classic.” -UPI
THE HOUSE OF THUNDER
“Koontz is brilliant.”
-Chicago
Sun-Times
THE VOICE OF THE NIGHT
“A fearsome tour of an adolescent’s psyche. Terrifying, knee-knocking suspense.”
-Chicago Sun-Times
THE BAD PLACE
“A new experience in breathless terror.”—UPI
THE SERVANTS OF TWILIGHT
“A great storyteller.”
—New York Daily News
MIDNIGHT
“A triumph.”
-The New York Times
LIGHTNING
“Brilliant... a spine-tingling tale... both challenging and entertaining.” -The Associated Press
THE MASK
“Koontz hones his fearful yarns to a gleaming edge.”
-People
WATCHERS
“A breakthrough for Koontz... his best ever.”
-Kirkus Reviews

TWILIGHT EYES
“A spine-chilling adventure... will keep you turning pages to the very end.”
—Rave Reviews
STRANGERS
“A unique spellbinder that captures the reader on the first page. Exciting, enjoyable, and an intensely satisfying read.” -Mary Higgins Clark
PHANTOMS
“First-rate suspense, scary and stylish.”
-Los Angeles Times
WHISPERS
“Pulls out all the stops... an incredible, terrifying tale.”
—Publishers Weekly
NIGHT CHILLS
“Will send chills down your back.”
-The New York Times

DARKFALL
“A fast-paced tale... one of the scariest chase scenes ever.”
-Houston Post
SHATTERED
“A chilling tale... sleek as a bullet.”
—Publishers Weekly
THE VISION
“Spine-tingling—it gives you an almost lethal shock.”
-San Franciso Chronicle
THE FACE OF FEAR
“Real suspense... tension upon tension.”
-The New York Times
Berkley titles by Dean Koontz
THE EYES OF DARKNESS
THE KEY TO MIDNIGHT
MR. MURDER
THE FUNHOUSE
DRAGON TEARS
SHADOWFIRES
HIDEAWAY
COLD FIRE
THE HOUSE OF THUNDER
THE VOICE OF THE NIGHT
THE BAD PLACE
THE SERVANTS OF TWILIGHT
MIDNIGHT
LIGHTNING
THE MASK
WATCHERS
TWILIGHT EYES
STRANGERS
DEMON SEED
PHANTOMS
WHISPERS
NIGHT CHILLS
DARKFALL
SHATTERED
THE VISION
THE FACE OF FEAR 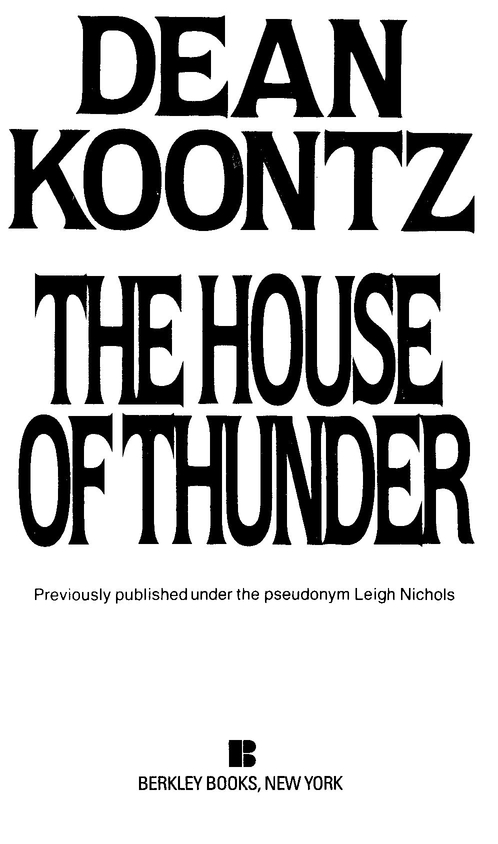 This book is for Gerda,
as it surely should have been
from the start.
PART ONE
Fear Comes Quietly...
The year was 1980-an ancient time,
so long ago and far away....
1
When she woke, she thought she was blind. She opened her eyes and could see only purple darkness, ominous and shapeless shadows stirring within other shadows. Before she could panic, that gloom gave way to a pale haze, and the haze resolved into a white, acoustic-tile ceiling.
She smelled fresh bed linens. Antiseptics. Disinfectants. Rubbing alcohol.
She turned her head, and pain flashed the length of her forehead, as if an electric shock had snapped through her skull from temple to temple. Her eyes immediately swam out of focus. When her vision cleared again, she saw that she was in a hospital room.
She could not remember being admitted to a hospital. She didn’t even know the name of it or in what city it was located.
What’s wrong with me?
She raised one dismayingly weak arm, put a hand to her brow, and discovered a bandage over half of her forehead. Her hair was quite short, too. Hadn’t she worn it long and full?
She had insufficient strength to keep her arm raised; she let it drop back to the mattress.
She couldn’t raise her left arm at all, for it was taped to a heavy board and pierced by a needle. She was being fed intravenously: the chrome IV rack, with its dangling bottle of glucose, stood beside the bed.
For a moment she closed her eyes, certain that she was only dreaming. When she looked again, however, the room was still there, unchanged: white ceiling, white walls, a green tile floor, pale yellow drapes drawn back at the sides of the large window. Beyond the glass, there were tall evergreens of some kind and a cloudy sky with only a few small patches of blue. There was another bed, but it was empty; she had no roommate.
The side rails on her own bed were raised to prevent her from falling to the floor. She felt as helpless as a baby in a crib.
She realized she didn’t know her name. Or her age. Or anything else about herself.
She strained against the blank wall in her mind, attempting to topple it and release the memories imprisoned on the other side, but she had no success; the wall stood, inviolate. Like a blossom of frost, fear opened icy petals in the pit of her stomach. She tried harder to remember, but she had no success.
Amnesia. Brain damage.
Those dreaded words landed with the force of hammer blows in her mind. Evidently, she had been in an accident and had sustained a serious head injury. She considered the grim prospect of permanent mental disorientation, and she shuddered.
Suddenly, however, unexpected and unsought, her name came to her. Susan. Susan Thorton. She was thirty-two years old.
The anticipated flood of recollections turned out to be just a trickle. She could recall nothing more than her name and age. Although she probed insistently at the darkness in her mind, she couldn’t remember where she lived. How did she earn her living? Was she married? Did she have any children? Where had she been born? Where had she gone to school? What foods did she like? What was her favorite kind of music? She could find no answers to either important or trivial questions.
Amnesia. Brain damage.
Fear quickened her heartbeat. Then, mercifully, she remembered that she had been on vacation in Oregon. She didn’t know where she had come from; she didn’t know what job she would return to once her vacation came to an end; but at least she knew where she was. Somewhere in Oregon. The last thing she could recall was a beautiful mountain highway. An image of that landscape came to her in vivid detail. She had been driving through a pine forest, not far from the sea, listening to the radio, enjoying a clear blue morning. She drove through a sleepy village of stone and clapboard houses, then passed a couple of slow-moving logging trucks, then had the road all to herself for a few miles, and then... then...
Nothing. After that, she had awakened, confused and blurry-eyed, in the hospital.
“Well, well. Hello there.”
Susan turned her head, searching for the person who had spoken. Her eyes slipped out of focus again, and a new dull pain pulsed at the base of her skull.
“How are you feeling? You
do
look pale, but after what you’ve been through, that’s certainly to be expected, isn’t it? Of course it is. Of course.”
The voice belonged to a nurse who was approaching the bed from the direction of the open door. She was a pleasantly plump, gray-haired woman with warm brown eyes and a wide smile. She wore a pair of white-framed glasses on a beaded chain around her neck; at the moment, the glasses hung unused on her matronly bosom.
Susan tried to speak. Couldn’t.
Even the meager effort of straining for words made her so light-headed that she thought she might pass out. Her extreme weakness scared her.
The nurse reached the bed and smiled reassuringly. “I knew you’d come out of it, honey. I just knew it. Some people around here weren’t so sure as I was. But I knew you had moxie.” She pushed the call button on the headboard of the bed.
Susan tried to speak again, and this time she managed to make a sound, though it was only a low and meaningless gurgle in the back of her throat. Suddenly she wondered if she would ever speak again. Perhaps she would be condemned to making grunting, gibbering animal noises for the rest of her life. Sometimes, brain damage resulted in a loss of speech, didn’t it?
Didn’t it?

Finding Love in a Dark World: A Steamy Post-Apocalyptic Romance by Unknown
He Did It All For You by Copeland, Kenneth, Copeland, Gloria
The Lover From an Icy Sea by Alexandra S Sophia
The Dream Walker by Carly Fall, Allison Itterly
PluckingthePearl by Afton Locke
Whispers at Midnight by Karen Robards
The Earthrise Trilogy by Colin Owen
Swept Away: A Squeaky Clean Honeymoon Novella (Squeaky Clean Mysteries Book 12) by Barritt, Christy
Hacker For Hire (Ted Higuera Series Book 2) by Wallace, Pendelton
Erica Spindler by In Silence
Our partner