Read The House of Velvet and Glass Online

The House of Velvet and Glass Praise for
The House of Velvet and Glass

“Richly atmospheric,
The House of Velvet and Glass
transported me to the turn of the twentieth century and a world changing as rapidly and irrevocably as our own. A gifted historian and storyteller, Katherine Howe has created a vividly imagined world that made me want to suspend time, lingering just a bit longer with the characters who live there, before the whole thing vanished in the clouded glass.”

—Brunonia Barry, author of
The Lace Reader
and
The Map of True Places

“Katherine Howe follows up her amazing debut with
The House of Velvet and Glass
, a thoughtful journey into the realms of the supernatural that inhabits its source material with effortless ease and charm. A totally absorbing read peopled with characters who will haunt readers’ minds.”

—David Liss, author of
The Twelfth Enchantment
and
A Conspiracy of Paper

“An intricate and intimate family portrait, painted against a backdrop of beautifully rendered tales of colonialist Shanghai, the wreck of the
Titanic
, and upper-crust Boston dabblers in the spirit world in the uneasy days preceding the Great War.”

—Lyndsay Faye, author of
The Gods of Gotham
and
Dust and Shadow

Praise for
The House of Velvet and Glass

Part 3: The Turn of the Glass

The Armchair Medium’s Guide to Scrying

Praise for
The Physick Book of Deliverance Dane

A Conversation with Katherine Howe 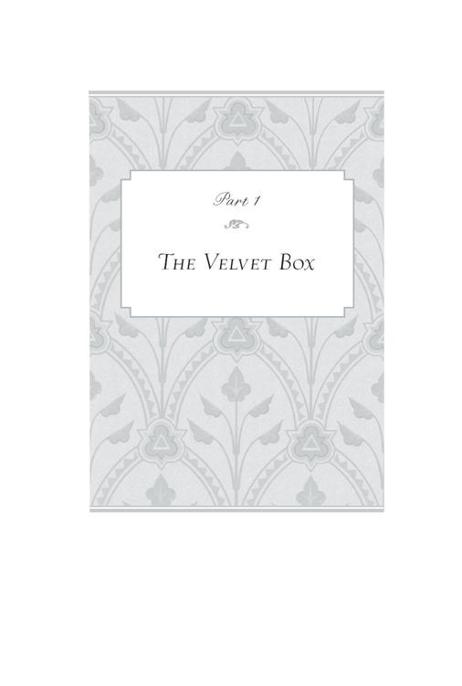 Somewhere below the hubbub of the dinner hour, under the omnipresent vibrating of the ship’s engines, a clock could be heard beginning to chime. Helen Allston tightened her grip on her daughter’s elbow, brushing aside the lace from Eulah’s sleeve to better settle her fingers in its crook. She cast a sidelong glance at Eulah, whose buoyant anticipation seemed not to register her mother’s weight on her arm. Eulah’s face, flushed and pink, eyelids darkened with such a cunning hand that even Helen, who knew better, found the change difficult to detect, wore a bright, open expression that few other women’s daughters could manage with success. Helen sighed with satisfaction. She never tired of seeing the world through Eulah’s eyes, young and willing as they were.

But not too willing, of course.

“What a fetching way you’ve done your hair,” she murmured, steering Eulah with a firm hand toward the grand staircase. Her daughter’s blond curls, too unruly for Helen’s liking most of the time, had been twisted off her forehead and fastened back in a roll, then smothered with a cloud of fragile black netting fastened at the crown with a butterfly, its enamel wings set
en tremblant
, and so shimmering slightly with Eulah’s every movement.

“My brooch?” Helen said aloud, recognizing the ornament, and Eulah turned to her, eyes wide with mock innocence.

“You don’t mind, do you, Mother?” she asked, dimpling. “Nellie said that all the New York girls were wearing brooches this way, and I thought . . .”

Helen held her gaze for a moment, sufficient to indicate whose brooch this was really, but not long enough to instill any real remorse. She knew that she was inclined to give Eulah too much, rather than too little, leeway. Eulah had a way of making one see the absolute logic of her preferences, no matter how unorthodox. And she had to admit that the new maid they’d brought with them had a good eye for what was fashionable in hairdressing.

“Well,” she demurred, and Eulah laughed, placing her hand on her mother’s, knowing the battle was won before it started.

“Just remember, my dear, that for all that New York fashion, you’re a Boston girl,” Helen whispered, to Eulah’s puff of exasperation. This motherly remonstration dispensed with, the two Allston women paused at the top of the staircase, readying themselves.

Helen’s gaze traveled over her daughter for a final appraisal, wanting to ensure that everything was in its place before they swept down the stairs and into the first-class dining room. Under the netting Eulah’s liquid blue eyes glimmered with anticipation, behind which lurked something else that Helen struggled to identify. She peered closer. Determination, perhaps.

She was accustomed to seeing her youngest child determined. All her children were willful, of course, but Eulah had taken the Allston stubbornness and aimed it outward, at a world that she felt needed fixing, with the same alacrity that Helen’s two older children aimed inward, at themselves. Perhaps after all Eulah finally understood the opportunities available to her on this journey, even more than Helen had guessed.

This determination appeared in the obvious care that her daughter had taken with her evening dress. Helen took pleasure in the creativity Eulah showed in instructing the dressmakers back on Tremont Street, and she suspected that her hours with the dressmakers in Paris would only make Eulah’s directions more demanding. Well, she supposed they would be, anyway, given all that time poring over
Journal des Dames et des Modes
.

Helen thought it best that Eulah not attempt to look too French, at least not until well after they returned from the tour, so she was glad to see her waist just a little high but still bound with a satin sash, a deep vermilion that she recognized from one of Eulah’s coming-out dresses last winter. The reused satin gathered a rich, narrow column of marigold silk with a matching lace overlay around the bodice, which suited her figure marvelously. Granted, the bodice was just a shade low for Helen’s taste. But she had to admit that the lower cut set off Eulah’s grandmother’s cameo beautifully. All in all, Helen concluded that the months in Italy and France had done wonders for her daughter. Eulah had left Boston a fresh, lively girl, and now she had all the freshness of before, but with the sophisticated gloss that can only be imparted by prolonged exposure to certain works of art, performances of opera, and the perfumed air of fashionable restaurants.

Helen cast a melancholy eye down at her own costume, an evening dress a few seasons out-of-date, but still serviceable. Navy taffeta, low on the shoulders, with black beadwork and sashed with pale blue. She wished she had thought to take it over to Mme. Planchette’s atelier for a sprucing up, shortening above the floor, at least. Her slippers groped around in puddles of silk, hunting for purchase on the polished deck. Helen frowned, regretting her age, and her hand sneaked up to finger the seed pearl choker nestled in the delicate skin of her throat.

Anne Barbour by A Talent for Trouble
My Best Friend's Bride by Baird, Ginny
Dance Of Desire by Sweet and Special Books
whiskey witches 02 - blood moon magick by blooding, s m
Bones to Ashes by Kathy Reichs
Let Us Eat Cake by Destiny Moon
A Dark Guardian by Grant, Donna
Kindred of the Fallen by Isis Rushdan
Drink Down the Moon by Charles deLint
Vice (Fireborn Wolves Book 1) by Genevieve Jack
Our partner