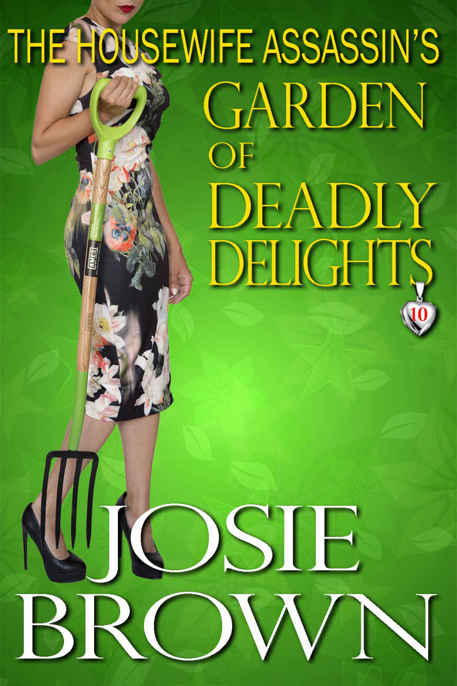 Chapter 1 And How Does YOUR Garden Grow?

And How Does YOUR Garden Grow?

Fresh cut, manicured lawns. A rainbow’s hue of blooms. From the lushest tree to the thickest bush, every inch of a housewife’s garden is scrutinized by her neighbors.

To ensure that others stare at it in awe (as opposed to glare at it in horror), follow these helpful hints:

Hint #1: Nurture your plants. Know their growth patterns, and their need for sun, water, and soil type—in the same way you know the life story, habits, and predilections of your targets. It’s the only way to ensure you control their fates.

Hint #2: Variety is the spice of life—and death. While succulent plums and crisp apples are fruits of your labor that you can actually eat, castor bean and rosary pea aren’t really vegetables, but deadly poisons—good to know, in case there are a few accidents you can’t wait to have happen. Angel’s Trumpet tea, anyone?

Hint #3: Always add to your garden. A well-placed flowerbed does a lot to cover your yard’s sins—and yours too, especially if you’ve got a corpse or two still lying around.

A tiny, porcelain Buddha—barrel-bellied and squint-eyed from his clownishly wide grin—taunts me from the next table. I am sitting in the open street-side patio in the Happy Sun Dim Sum Emporium, on Grant Street in San Francisco’s Chinatown, tailing my target on the last leg of his indiscriminate shopping spree. His name is Yang Cheng. He is an asset for the MSS—the People’s Republic of China’s Ministry of State Security—its covert-ops agency.

He has lousy taste in gifts.

Not only did he purchase the Buddha, but a vinyl Hello Kitty pencil box, and a Patek Philippe men’s watch knock-off. All of these tchotchkes are actually made in his country before being shipped here, where they are purchased by tourists who don’t realize that practically everything they already own is made in Chinese factories.

Yang eats alone, slurping down one
siu mai, bao, shu mai
and
har gow
after another. The dim sum carts, tinkling from the tins filled with their savory delights, don’t get very far down the slim aisle by his sidewalk table before he stops them to peruse his next dish. From what I’ve counted, he has already chowed down on twenty of the aromatic pot stickers, as well as three pork steamed buns. If he keeps this up, he’ll soon resemble his laughing Buddha.

The majority of the restaurant’s patrons are locals—mostly Chinese-American, but there is a smattering of Caucasian locals and tourists too. My mission partner, Jack, and I can easily be mistaken for the latter as we sit side-by-side, cuddling and cooing and making goo-goo eyes, like any couple on a weekend romp in America’s most romantic city.

And, like everyone else, we use our cell phones to take photos of the food and selfies of ourselves enjoying it.

It may seem we’re photographing each other, but in truth, we’re documenting Yang’s movements for our employer, the CIA-sanctioned black-ops organization, Acme Industries, for anything that may tip us off as to when the hand-off takes place.

Once it does, we’ll make sure that Yang won’t even get as far as the exotic green tile-roofed Dragon Gate at Chinatown’s entrance before he is overcome with a fatal heart attack. It won’t be the Chinese food that kills him, but a prick with a needle filled with aconite.

We don’t know who is doing the drop, but we have satellite surveillance on the restaurant, so that our tech-op, Arnie Locklear, can follow Yang’s cutout to a final destination. He also sees what we see, through our special surveillance contacts.

“Incoming,” Jack murmurs, as he takes a dumpling and holds it to my lips so that I can take a bite.

Even as I lick my lips and open wide, I shift my gaze toward Yang. Jack is right in one regard: Yang has been accosted by a little old lady. Her hair is gray, her skin is pocked, and her back is bowed with age. She stands outside the thin railing that separates the Happy Sun’s tables from the rest of the sidewalk. Apparently, she is trying to sell him historic postcards of Chinatown. He waves her away while shouting back at her in Mandarin, but she is insistent. When she jabs a gnarled finger at one card in particular, something he sees there makes him stop mid-expletive. He grabs them out of one of her hands and shoves a ten-dollar bill into the other. She stuffs the bill deep into the folds of her shawl.

The Buddha is pocketed too.

“If that’s the case, go after her,” Jack insists. “There must have been something in the Buddha, and it’s being passed off to someone else. Find out whom, while I take care of Yang.”

As part of my cover, I give him a long, deep kiss. It’s also part of my philosophy on life: live every moment as if it is your last.

As our lips part, I slip him the needle with the aconite and whisper, “Take the cards. By his reaction, they’re obviously important.”

He nods as he strokes my cheek. “Be careful,” he mutters.

As I saunter out of the restaurant, I feel Yang’s eyes upon me. I don’t like the leer on his lips.

That’s okay. It won’t be there for long.

The little old lady weaves in and out of the thick throng of tourists who are perusing the myriad of wares on the outside tables of the district’s vendors.

She stops four blocks from the Happy Sun, beside a trio of old men who are playing authentic Chinese instruments, as if enthralled by their simple tune.

A young Asian man in black jeans and a leather jacket nudges her. They don’t make eye contact, but he proves he has the Buddha when he tosses it in the air before pocketing it.

When she looks back, I turn toward a shop window displaying silk kimonos. Her reflection is clear enough for me to see the satisfied smirk on her face.

Then, suddenly, the smirk is gone, along with the rest of her face. Really, it was a mask. Now I see a beautiful Asian woman who looks to be in her late twenties. She also strips off the gloves—thin skin-like latex—that gave her hands an aged effect, and tosses all three items into a trashcan.

“Did you get a clean enough shot for a scan?” I ask Arnie.

When I turn back around, she is climbing on a bus headed up Sacramento Street’s steep incline.

On the other hand, her courier strides quickly down the street.

Quickly, I grab the gloves and mask from the trash. Then I run toward the courier, only to be blocked by a clerk insisting to a German tourist that the Bose speaker system in his hand can be purchased much more cheaply here than in Berlin.

By the time I get around the hagglers, it’s too late. The courier has disappeared into thin air—

Or not. I pass a narrow alley wedged between a souvenir shop and a restaurant, the Crescent Moon. I hear footsteps. A slim shaft of light reveals the man. He pulls a brick from the wall and pulled out a key.

He gets the feeling that he’s not alone. Slowly, he turns around. Seeing me, he frowns—

Then hurls the brick at me.

I duck just in time. The brick whizzes above my head by barely an inch.

By the time I’ve drawn my Sig Sauer P226R, he has already hopped onto one of the two motorcycles used by the Crescent Moon’s delivery team—both Ducati Hypermotards—and is roaring down the alley.

The second bike’s ignition key is tucked in the hole in the wall as well. I hop on, rev it up, and head down the alley until it dead-ends into another. But I’ve reached it just in time to see my target’s bike climbing a stone stairwell.

When the courier reaches the top, he skids to a stop.

Damn it, my bullet just misses his ear. He’s now duly warned that I mean business, and screeches off again.

I open up the throttle on my bike so that it climbs the stairs too.

When my bike reaches the top, it clatters over the roof’s clay tiles before landing onto the flat center beam. I brake hard to halt it from flying off into oblivion and crash-landing onto the unsuspecting tourists three stories below.

The courier is already on the far side of the roof. He zips over a long, narrow plank that connects a neighboring building’s even steeper roof over an alleyway.

He makes the leap. As he roars off again, he turns back to wave at me, a wide grin on his face. Of course, he doesn’t expect me to follow.

Wrong. My son’s dirt biking scout badge came at the expense of many cuts and bruises—his and mine. Granted, as his troop’s leader, I wasn’t eligible for a badge. That’s okay. The true reward of any skill is how you use it to your own advantage. I use it now, as I zoom off after the courier. I twist the throttle—

And over the alley I go.

As my motorcycle hits the slanted roof, it almost slips out from under me, but not quite. I rev the engine to keep my momentum. A second later, I crest the roof, skidding onto the center joist.

The courier’s bike clatters on the clay tiles as it heads toward the far side of the roof. I shoot for his head, but he ducks just in time.

He now realizes that his only chance to lose me is to leap onto another roof. Unfortunately for him, the closest building is at least a fifteen-foot jump. To make matters worse, its roof’s pitch is even steeper than the last.

Aquamaxitor by Mac Park
In the Land of Tea and Ravens by R.K. Ryals
The Ghost of a Chance by Vivien, Natalie
Wolf Tracker by Maddy Barone
Self-Inflicted Wounds: Heartwarming Tales of Epic Humiliation by Aisha Tyler
For the Good of the Cause by Alexander Solzhenitsyn
Morning Star: Book III of the Red Rising Trilogy by Pierce Brown
X-Isle by Steve Augarde
Forge of War (Jack of Harts) by Pryde, Medron
El Druida by Morgan Llywelyn
Our partner