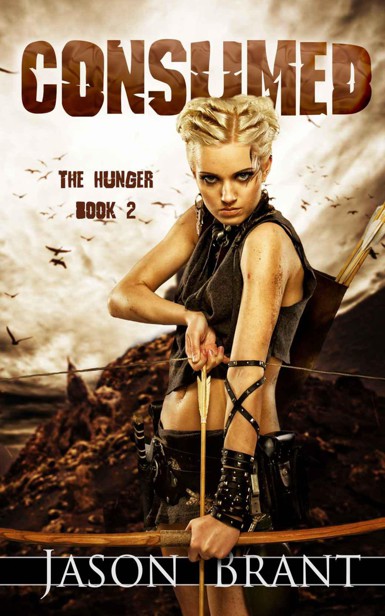 All rights reserved. No part of this publication may be reproduced, distributed, or transmitted in any form or by any means, including photocopying, recording, or other electronic or mechanical methods, without the prior written permission from Jason Brant, except in the case of brief quotations embodied in critical reviews and certain other noncommercial uses permitted by copyright law.

This book is a work of fiction. Names, characters, places and incidents are products of the author’s imagination or are used fictitiously. Any resemblance to actual events, locales, or persons living or dead, is entirely coincidental.

Want to get an email when my next book is released?

T
he sigh that escaped Lance’s lips would have given anyone within earshot the wrong impression of what he was doing.

Soft, white socks slid over his heel, brushing against his skin like the lips of angels.  He sat on the bench in the shoe department of Target, relishing the cotton on his damaged feet.  His toes wriggled inside the white constraints, working the fabric into all the right places.

The little inconveniences threw Lance off the most.  Not having fresh socks and underwear every day bothered him more than he would have expected.  He got more used to this new life all the time, but the small things still irked him.

The four of them had been washing their clothes in the river, but considering the cleanliness of the water, it didn’t accomplish much.  The shoe department was his first stop because of it.

Lance put his shoes back on, double knotting them so they wouldn’t fall off at an inopportune time.  If he never went barefoot again, it would be too soon.  His injured foot felt much better, though it still ached if he walked on it too much.

Without power to the overhead lights, the retail store was mostly dark.  A dim glow from the destroyed glass entry at the front of the building allowed Lance to move around with minimal use of his flashlight.  It was dark inside, but not enough that he had to worry about running into a nest of Vladdies.

They only nested in places with zero light.

He lifted his new backpack from the floor and stuffed half a dozen bags of socks inside.  They would last for a few weeks, at least.  More if he stayed on the boat.

Silence encompassed the department Lance was in, but he tiptoed to the end of the aisle anyway.  He peered both ways, pausing, listening for the sounds of breathing or footfalls.  Satisfied that nothing else was around, he headed for the sporting goods section on the other side of the building.

Leaving the boat proved dangerous every time they had to gather supplies on land.  The doc suggested they try fishing, hoping to make them more self-sustained.  Lance didn’t know a whole hell of a lot about fish, or how to catch them, but he liked the idea nonetheless.  They put their lives on the line every time they left the boat.

He tripped over an unseen object in front of the electronics section and staggered forward, his hands reaching out for something to grab on to.  His fingers brushed against the metal cage of a half-empty discount-movie bin.  He latched onto it, trying to right himself, before he fell to the floor, pulling the plastic DVD and Blu-ray cases on top of him.

The clattering of the metal and plastic on the hard floor bounced around the entire store.

Lance froze, holding his breath, praying he wouldn’t hear one of the shrieks that haunted his nightmares.

“Christ, I’m an idiot,” he muttered to himself.  He brushed away the cases and stood back up.  “It’s a miracle I haven’t gotten myself killed.”

He pulled a small flashlight from his pocket and turned it on.  Before heading into the store, everyone had agreed not to use their lights unless absolutely necessary.  Making enough racket to wake the dead constituted as necessary to Lance.

Panning the beam around, he noticed that most of the televisions and surround sound systems had been ripped from the shelves and wall mounts.  Even the movie bin he’d tripped over had most of its contents taken away.  The glass display for iPads and Android tablets was smashed, the gadgets stolen.

Though he’d been surviving on a boat for over a week now, Lance still couldn’t believe that everything was gone.  Just gone.

All the morons who looted the stores and robbed from their neighbors during the early days were dead.

He checked the path to the sporting goods section, saw it was clear, and clicked his flashlight off again.  While shuffling through the building, he couldn’t keep his mind from flipping through all the things he’d never experience again.

Dressing up for Halloween.  Greedily opening gifts on Christmas morning.  Pounding beers in a bar on his birthday.  Screaming at the television when a quarterback threw an interception.

Now he bathed in a dirty river and tried not to get eaten by the horrors that ruled the night.

Yet, he was happier than he had been in years.  His self-loathing was gone, replaced by a never-ending drive to stay one step ahead of the next disaster.  He had a beautiful woman by his side who didn’t put him through the emotional turmoil he’d suffered during his marriage.

Considering the present state of the world, he really couldn’t complain.

Lance used his flashlight again to find the fishing gear.  After filling two tackle boxes with lures and lines, he grabbed a handful of poles and headed back to the middle of the store.  A large, four-person tent rested against the end of the aisle.

He squinted against the darkness, trying to make out the details on the side of the packaging.
Water resistant and easy to assemble
, it read.  With a shrug, he picked the box up and stuffed it under his left arm.

A sound ahead stopped him in his tracks.

The poles in his hand rubbed against each other, the reels clicking as he steadied his grip.

He angled his ear toward the sound.  Cass and the doc were at the pharmacy, scrounging for medical supplies.  Eifort stayed back at the boat, operating the drawbridge so nothing could go aboard while they were gone.

None of them were anywhere nearby.

Something rustled by the electronics.

Lance took a step to the left, intent on weaving through the clothing racks and changing rooms before he looked at the supplies he carried.  They would get caught on everything he walked past.

A footstep slapped on the floor in front of him.

The outline of
something
appeared before him, silhouetted by the light coming from the front of the building.

An ear-piercing shriek startled him.  He fumbled with the tent and fishing poles, fighting to keep a grip on them.

Lance spun on his heels and hobbled away, trying not to drop the supplies he’d ventured into Target for.  They needed the equipment and he didn’t want to abandon it unless he had no other choice.

Footfalls plodded along behind him as he turned by the furniture department.  His shoulder slammed into a rack of rolled-up throw rugs, sending them to the floor with muted thuds.

Another wail from the infected echoed from his left.

“Shit!”  Lance tried to accelerate, but his overstuffed arms hindered his movements.

Three daywalkers emerged from the shadows of an aisle and sprinted toward him, their maws distending in terrifying yawns.

Lance ran by the pharmacy, frantically searching for Cass and the doc.  “Get the hell out!”

He didn’t see either of them so he kept going.  His breathing grew labored as he neared the entrance.  The light intensified, skewing his vision as he passed through the shattered glass doors.

Cass and Brown waited by a bus stop in front of the building, hiding behind the opaque plastic housing.  Lance shuffled past, shouting for them to get moving.

“What’s going on, dumbass?” Cass stood and reached for her axe.

“Bunch of them!”  Lance peeked over his shoulder in time to see half a dozen of the infected file out of the main entrance.  “Run!”

Cass saw how many of them gave chase and released her axe.  She bent down and picked up two hand baskets filled with drugs and medicines as Lance ran by.

Doc Brown swore as he grabbed a handful of bags from the sidewalk and ran for the boat.  His shot arm remained in a homemade sling comprised of torn shirts.

They crossed the parking lot slower than Lance wanted, weighed down by their supplies.  Cars sat in the middle of lanes and across lines, parked haphazardly.  Doors hung ajar, blood staining the asphalt in trails and pools.

A Wendy’s restaurant stood in the adjacent lot, daywalkers milling around the outside of it.  More of the infected staggered between the gas pumps of an Exxon station at the far end of the parking lot.

Lance and Cass had made multiple trips to the gas station over the past week, filling gas cans to refuel the boat.  They hadn’t been able to go anywhere near the pumps for two days in a row after the mass of daywalkers had taken up occupation.

Patience was on their side though.  They had enough food and fuel to make it for quite a while, so they merely had to wait for the Xavier virus to fully transform the sick and segregate them to the shadows of the night.  To get to the Target, they’d taken the long way around, giving the gas station a wide berth.

They didn’t have time for that now.

Lance slowed down, letting Cass and the doc catch up.

“We’re going to have to run right past them,” Lance huffed.

Cass nodded.  “Just stay as quiet as you can.  We might be able to get right on top of them before they notice us.”

The boat wasn’t visible from the parking lot, blocked by several buildings and a line of trees in front of the river.  Lance hoped Eifort was paying attention—they wouldn’t have time to wait for her to lower the drawbridge.

A car alarm blared behind them.

Lance looked over his shoulder and spotted a daywalker flopping on the hood of a Toyota, the lights flashing.

He turned around to see the infected at the Exxon station already running toward them.  The bleating alarm would attract everything within earshot.  Those by the Wendy’s spun around and cried out, blind eyes working uselessly in their sockets.  They stumbled forward, gaining speed as they crossed over the drive-through lane of the fast food restaurant.