Read The Importance of Being Wicked (Millworth Manor) Online

The Importance of Being Wicked (Millworth Manor) 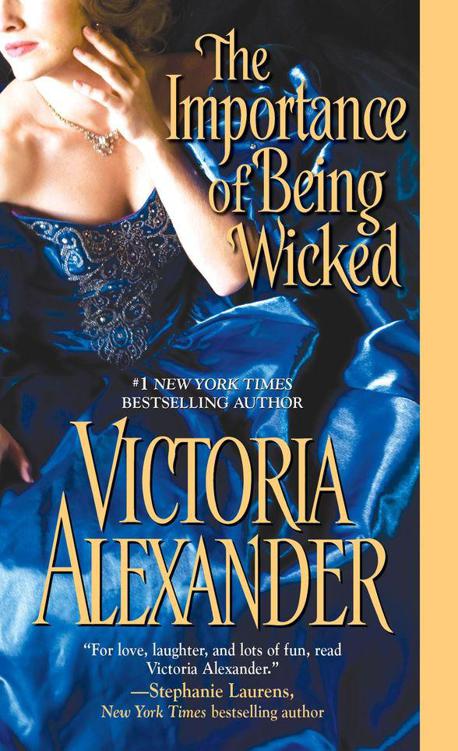 EVERY MAN’S DREAM
He pulled her into his arms. “I’ve never been with a woman of business before. Or for that matter”—he smiled—“a governess.”
“What? You’ve never fulfilled that dream of every little boy?”
“Not yet.” He bent closer and kissed the curve between her neck and shoulder. She shivered.
“Then we are well matched.” A slight breathless note sounded in her voice. Her eyes were green and glazed with desire. “I have never before been with a wicked lord.”
“You will tell me if it doesn’t live up to your expectations,” he murmured against her skin.
“You shall be the first to know.” She pulled away, wrapped her arms around his neck and drew his face to hers.
Their lips met in a kiss, slow and deliberate. A kiss that said they had all the time in the world. A kiss to savor, to relish and enjoy.
It was not enough....
Books by Victoria Alexander
THE PERFECT MISTRESS
HIS MISTRESS BY CHRISTMAS
MY WICKED LITTLE LIES
WHAT HAPPENS AT CHRISTMAS
THE IMPORTANCE OF BEING WICKED
Published by Kensington Publishing Corporation
The Importance of Being Wicked
V
ICTORIA
A
LEXANDER

Catch & Neutralize by Chris Grams
Star Trek: The Rings of Time by Greg Cox
El hombre que confundió a su mujer con un sombrero by Oliver Sacks
Elders and Betters by Ivy Compton-Burnett
Rapscallion by James McGee
Fool for Love (Montana Romance) by Farmer, Merry
Significant Others by Armistead Maupin
Murders in the Blitz by Julia Underwood
Devils and Dust by J.D. Rhoades
Time of the Wolf by James Wilde
Our partner