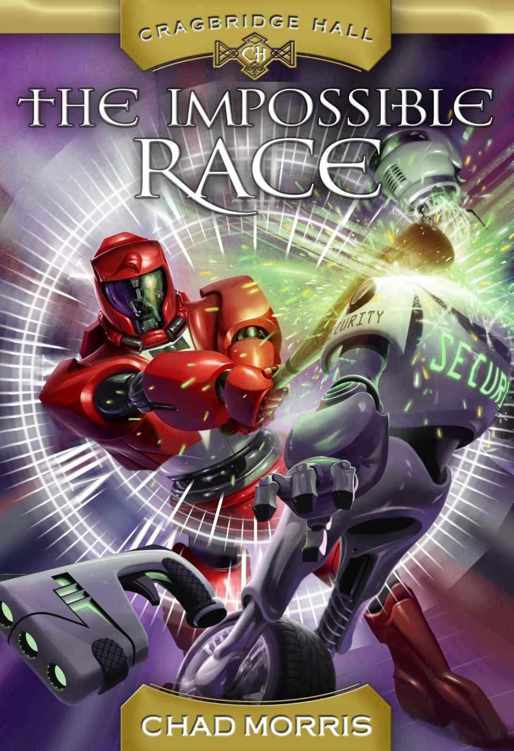 © 2015 Chad Morris, Brandon Dorman.
All rights reserved. No part of this book may be reproduced in any form or by any means without permission in writing from the publisher, Shadow Mountain
®
. The views expressed herein are the responsibility of the author and do not necessarily represent the position of Shadow Mountain.

This is a work of fiction. Characters and events in this book are products of the author’s imagination or are represented fictitiously.

Other Books in the Cragbridge Hall Series

One day you’ll be a published authorand I’ll be thrilled to read your stories.

Table of Contents
The Backup Plan
Are You Sure?
The Ash
Whoa. Mind Blown.
The Cane
The Announcement
Decision
Stoop
Better than Brilliance
Anjum
Suspects
The Big Opening
Oscars and Ancient Argentina
Less than a Second
In the Dark
One-Inch Spies
Flames
The Gallows
Going Mythical
Inside the Labyrinth
The Minotaur
The Final Blow
A Thief in the Darkness
Jenkins
Walled In
The Antidote
Criminals
The Future
March 29
Sandstorm
Acid
Fire
Me? Or Me?
Pounding
Tracked
Attack
Explosions
Don’t You Dare Apologize
Light
The Last Secret
Fifteen Minutes Ago
Returning the Favor
The End of the Year
Acknowledgments
Discussion Questions
Recommended Reading
About the Author

With a flick of his finger, the mercenary’s gun barrel emerged from his tan sleeve and aligned with his index finger. He pointed it at a woman tied and gagged in the corner of a small, cinder-block house. She shifted on the dirt ground, trying to get comfortable. Beneath her blindfold, she couldn’t see the gun. “
Nao quero esperar mais
,” the mercenary said.

A short man with a paunchy stomach and a patchy beard stood up and waved his hands to stop the gunman.

Abby triggered her translator. It’s hard to spy when you can’t understand what the people are saying. She and her friends had been ready to intervene if the bearded man hadn’t stopped the gunman, but as long as they stayed calm, she wanted to see if she could get any valuable information. Her translator recognized Portuguese and changed it to English through the small speaker in her ear.

“Put that away,” the man with the patchy beard commanded.

“I’m tired of waiting,” the gunman in the tan shirt replied, sending his barrel back into his sleeve. He opened the door to the small house, and light flooded in. Abby had to blink several times to get used to it. The man peered out at a dirt trail. It didn’t look like anyone else lived within miles. “Shouldn’t Muns have told us whether to kill her or let her go by now?”

“All I know,” a third mercenary said, sitting at a bare table on the other side of the room, his cigarette bouncing in his lips with every word, “is that if you shot her before Muns said you could, you’d find
yourself
a hostage in a small shack somewhere.” The man gestured to the house around him. “Probably something like this. And you’d likely be guarded by someone with little patience and an itchy trigger finger just like you.”

“It also means we wouldn’t get paid,” the man with the patchy beard added. “I like getting paid. So if we don’t,
I
might volunteer to be the guy with the itchy trigger finger.”

The man in the tan shirt glared back at his partners in crime, trying to decide whether or not he believed them.

Abby whispered to Carol, “Part of me can’t believe Muns would stoop this low, but part of me isn’t surprised.” They watched the scene as if they were in the same room, but they stood somewhere else entirely—somewhere on the other side of the world. Abby and Carol were watching from the secret basement of Cragbridge Hall, the most prestigious secondary school in the world. One half of the gym-sized basement was dimly lit with a cold, hard stone floor, but the other side showed the small hut in Brazil. They could watch the mercenaries on the other side of the world because of an invention that stood in the center of the room—the Bridge. Its metal console was mounted to the floor. What looked like silver branches jutted out from it, sprawling up into the ceiling. Entering their special keys and a sphere in the console of the Bridge allowed them to see anything in the past or the present. And whatever they watched filled the other half of the large room. What they were watching was the present. The image was faded like a ghost of what was really happening, but the woman who was gagged and blindfolded was going through the horror now.

“I know,” Carol agreed. “The fact that Muns would have these guys kidnap her so he could blackmail her sister is terrible. Muns is so creepy evil. He gives me shivers and goose bumps and the heebie-jeebies all at the same time.” She shuddered, her blonde ponytail shaking. “The heebieshivergoosbies,” she said. “Or the bumpaheebieshivegoos. They should put both of those words in the dictionary and put Muns’s face by them.”

Abby might have laughed if she wasn’t so upset about what she was seeing. “I say it’s time we fix this. We need the other two spheres.” To be able to travel into the past, they needed three keys inserted and turned simultaneously in the console on the Bridge. Those three keys were already in place and turned. A mechanical arm had also grasped a special sphere and pulled it inside the Bridge. The sphere allowed them to see the present. But if they wanted to travel into the present—to cross into somewhere else on Earth in that very moment, they needed two more spheres. It was all designed so that no one person could manipulate time by him- or herself. He or she would have to counsel with and use the help of another person. Carol handed Abby two more spheres, and Abby placed them over two of the keys. Robotic arms emerged from the control panel of the Bridge just above the keys and grabbed the spheres.

The Bridge trembled. “We have to hurry,” Abby said. “We probably have less than a minute.” Using the Bridge to see the present put a lot of pressure on the impressive invention. If used in the present for too long, it would shake itself into shambles.

The image of the hostage changed from being a faded ghost of the faraway scene to vivid and clear. Humidity flooded into the Cragbridge Hall basement, making it feel like there was a pool nearby. The smell of dirt and the stench of the neglected home also wafted in, mixed with the smell of the mercenaries’ and the hostage’s sweat.

Abby and Carol could now cross from the basement of Cragbridge Hall into Brazil, but it would be nearly impossible for them to help the hostage by themselves. Though they would definitely surprise the mercenaries, two unarmed seventh-grade girls would probably not fare well against several trained men with guns. It was a good thing Abby and Carol were not alone in the basement of Cragbridge Hall. Two other fantastic inventions of the school were with them.

Abby looked over her shoulder. “That’s your cue.” In response, a gorilla grunted and an alligator chomped his large jaws. Every bit of the animals, from their fur and scales to their eyes and teeth, looked completely natural, but the two creatures were actually elaborate robots. Abby’s twin brother, Derick, controlled the alligator. His real body was wearing a high-tech suit in a booth in the avatar lab of the school. Rafa, the Brazilian avatar prodigy, controlled the gorilla from the same lab.

The robot alligator crawled across the basement of the school and crossed into Brazil.

Abby couldn’t suppress a smile as she saw the mercenaries’ eyes pop wide and their mouths drop open. For them, it was like gaping jaws and razor teeth had simply appeared out of the cinder-block wall—an eight-foot alligator had come out of nowhere.

The mercenary at the table fell back, crashing to the ground and shouting in horror. The gator lunged and toppled the man in the tan shirt as he was trying to trigger his guns.

Rafa’s gorilla bounded in. Within seconds, he had ripped the guns from the wrists of the man with the patchy beard and thrown him across the room on top of the man who had fallen by the table.

Vice (Fireborn Wolves Book 1) by Genevieve Jack
Diva 02 _ Diva Takes the Cake, The by Krista Davis
The Forever Watch by David Ramirez
The Sorceress of Belmair by Bertrice Small
Let Me Love You by Mary Wine
INVISIBLE DUTY (INVISIBLE RECRUITS) by Buckham, Mary
Scattering Like Light by S.C. Ransom
Riven by Anders, Alivia
Alive and Fighting: New in Town by Connelly, Cole
Monsters by Peter Cawdron
Our partner