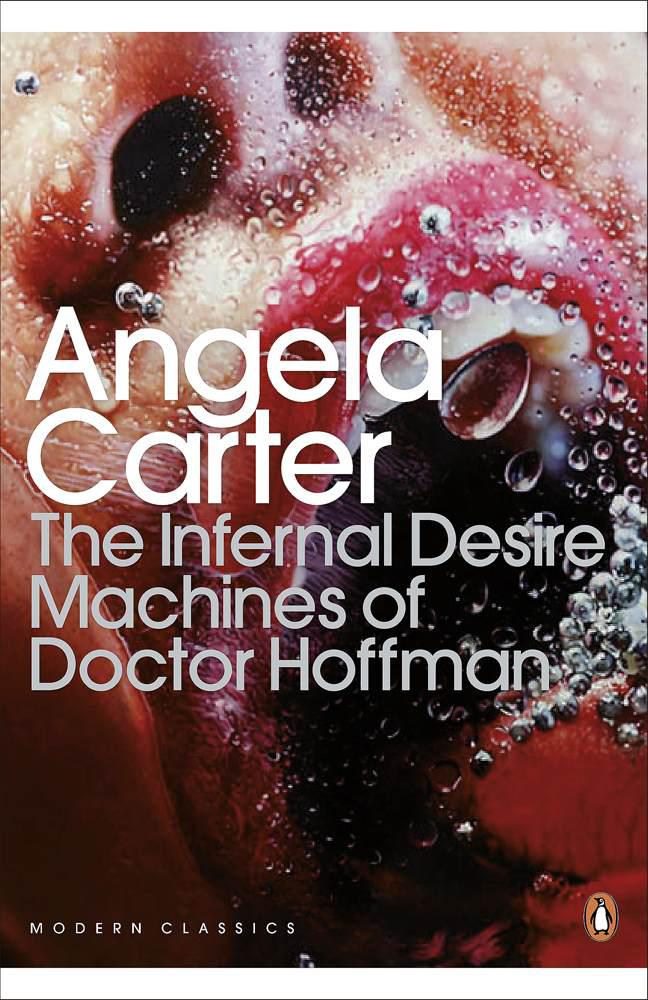 Angela Carter was born in Eastbourne in 1940 and later evacuated to live with her grandmother in Yorkshire. She studied English at Bristol University and published the first of her nine novels,
Shadow Dance
, in 1966. After escaping an early marriage, she used the proceeds of a Somerset Maugham Award to enable her to live in Japan for two years, a transforming experience. Her final novel,
Wise Children
, was published in 1991, a year before her death from lung cancer at the age of fifty-one. In an obituary from the
Observer
, Margaret Atwood wrote that ‘She was the opposite of parochial … She relished life and language hugely, and revelled in the universe.’

Perhaps best known for her last two novels,
Nights at the Circus
and
Wise Children
, Carter was much admired for her work’s exuberant mix of fantasy, philosophy, science fiction and satire.
The Infernal Desire Machines of Dr Hoffman
, published in 1972, is, according to Ali Smith, ‘her real, still underrated, classic’.

With an introduction by
ALI SMITH

First published in the United States of America under the title
The War of Dreams
by Harcourt Brace Jovanovich, Inc. 1973

Reissued with a new introduction in Penguin Books 2010

The moral right of the author and introducer has been asserted

1. The City Under Siege

2. The Mansion of Midnight

4. The Acrobats of Desire

6. The Coast of Africa

‘Love is the synthesis of dream and actuality; love is the only matrix of the unprecedented; love is the tree which buds lovers like roses.’ From the intoxicating dream-roses covering the warring city in its opening chapter – so powerfully imagined that they seem to perspire perfume, ‘make the very masonry drunk’, even sing piercing pentatonics heard by the inside of the nose – all the way to the novel’s end and the bloodstained handkerchief that blooms from its hero Desiderio’s pocket,
The Infernal Desire Machines of Doctor Hoffman
was itself, in literary terms, what might be called a matrix of the unprecedented.

It opens Proustianly: ‘I remember everything. Yes. I remember everything perfectly.’ But then, just a couple of pages on: ‘I cannot remember exactly how it began.’ Who can we trust in this or any story, when memory is so human and dream and actuality so inextricable? Our narrator is Desiderio, an old man now, an ageing politician and venerable historic figure, recalling his youth and the bygone era of Doctor Hoffman, a scientist who, by means of mass hallucination, can alter what reality looks like whenever he chooses.

The Doctor resembles a god, ‘probably omnipotent’, and has brought about a state of emergency in this unnamed South American metropolis by playing sumptuously poetic and insidious games with time and space: ‘I often glanced at my watch only to find its hands had been replaced by a healthy growth of ivy or honeysuckle.’ Such disruptive and seductive power messes with trade and challenges state control – anathema to the government of the city. A war of extremes, between rationality and the imagination, is soon raging, a war of power-envy too, between the Doctor and the Minister, who, with their capitalized roles, rule this novel like leftovers from Victorian socio-realism. But this is another literary landscape altogether. The Minister enlists Desiderio, half-Indian, half-outsider, a low-ranking civil servant crucially unmoved, even ‘bored’, by the Doctor’s baroque and beautiful illusions, a good candidate for tracking the Doctor down. ‘It was the day before my twenty-fourth birthday. In the afternoon, the Cathedral expired in a blaze of melodious fireworks.’ Soon everything
ex cathedra
in this novel is ablaze, and Desiderio, passionately in love with Hoffman’s beautiful and elusive daughter, Albertina, is on a veering picaresque journey that shifts and shimmers like Albertina herself in a postponement of narrative and sexual climax, through landscape after landscape, from seedy British seaside to primitive tribal, to Sadeian, to Swiftian, to Kafkaesque.

In a ‘bouquet of ferocious images of desire’,
The Infernal Desire Machines of Doctor Hoffman
declares itself a post-war novel. It was Carter’s sixth novel, published in 1972. Though she is renowned now for her rewritten fairy tales and the winning characterizations of the winged trapeze-artist and music-hall cockney-girl starlets in her two final novels,
Nights at the Circus
(1984) and
Wise Children
(1991),
The Infernal Desire Machines of Doctor Hoffman
is surely her real, still underrated, classic. This imagistically cornucopic and virtuoso performance is a visionary book for a virtual age.

It takes apart the ‘machines’ of love, of narrative, of social structure, in a fusion (and simultaneous analysis) of fantasy,
fin-de-siècle
richness, pastiche, sci-fi, thriller, postmodernism, picaresque, quest literature, adventure story, pornography and political and sociological theorizing. It was an unforeseeable leap forward in terms of form, voice and technique, even for Carter (whose novels tended to redefine her originality each time she published a new one). She had specialized in the medieval period at Bristol University: ‘As a medievalist, I was trained to read books as having many layers.’ But this is a work not so much layered with as organically formed by a shimmering body of allusion to the literary and visual arts. Try to pinpoint its influences (Kafka, Swift, Poe, Mallarmé, Freud, the Bible, cinema, de Sade, Shakespeare, Surrealism, Pope, Proust – and that’s just a surface skim) and it’s as if its author has swallowed literary and visual culture whole, from Chaucer to Calvino, de Mille to Fassbinder, Defoe to Foucault.

Perhaps it was too far ahead of its time for critical comfort: ‘Autobiographically, what happened next, when I realised that there were no limitations to what one could do in fiction, was… I stopped being able to make a living.’ It was, she said, ‘the beginning of my obscurity. I went from being a very promising young writer to being ignored.’ Her first five novels had earned her several literary awards and had gone out of their way to reveal the artifice of the literary realism which characterized the 1960s literary novel, outfacing kitchen-sinkism with gaudiness and anarchy. In among the unwashed clothes and pubs and parties, the shops and city streets and parks, Carter unveiled megalomania, sexual mastery, a surreality of social and sexual puppeteering. She saw this as no less realist. ‘I’ve got nothing against realism,’ she said. ‘But there is realism and realism. I mean, the questions that I ask myself, I think they are very much to do with reality.’ She wrote
Hoffman
in Japan, where she’d gone in 1969 on the money she’d won from a Somerset Maugham award, drafting the novel ‘in three months, in a Japanese fishing village on an island where she seems to have been the only European’, as the critic Susan Rubin Suleiman notes in a seminal essay on
Hoffman
and Surrealism. ‘Since I kept on trying to learn Japanese, and kept on failing to do so, I started trying to understand things by simply looking at them very, very carefully, an involuntary apprenticeship in the interpretation of signs.’ By all accounts, when she came back both her fiction and her life had been transformed. ‘In Japan, I learned what it is to be a woman and became radicalized.’ She wrote some of her most experimental short stories, later published in her first short story collection,
Fireworks
(1974), and published this novel, in which the roots of later works like
The Passion of New Eve
(1977) and
Nights at the Circus
can clearly be seen, but which arguably remains, on its own terms, her most formally courageous work.

The Man Every Woman Wants by Miranda Lee
Alyssa's Secret by Raven DeLajour
A Ship for The King by Richard Woodman
His Wicked Ways by Joanne Rock
Set Sail for Murder by R. T. Jordan
If Then by Matthew de Abaitua
Entropy Risen (The Syker Key Book 3) by Fransen, Aaron Martin
WAS by Geoff Ryman
Decaffeinated Corpse by Cleo Coyle
Gabriel's Horses by Alison Hart
Our partner