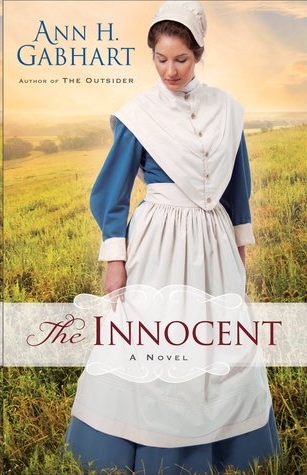 a division of Baker Publishing Group

Scripture used in this book, whether quoted or paraphrased by the characters, is taken from the King James Version of the Bible.

Published in association with the Books & Such Literary Agency.

To my family, and especially my son-in-law, Gary, who sparked the idea for this story by saying I should write about a sheriff and a Shaker.

When she saw the two men riding down the lane toward her house, Carlyn Kearney lifted the shotgun down off the long nails that held it over her front door. One of the men was a stranger, but the other one was not. She needed to keep a gun between her and that man. Not that she intended to shoot anybody, but she wasn’t about to let Curt Whitlow know that.

Beside her, Asher quivered as he watched the door with his gray-specked fur ruffed up on his neck and a low growl in his throat. The dog had barked once to alert her that the men were coming and now was ready for whatever she wanted to happen next. He was an uncommonly intelligent dog and the only reason she hadn’t gone insane after she stopped getting letters from Ambrose two summers ago.

“Easy.” She spoke softly to the dog, not wanting her voice to carry out to the porch. She gripped the gun tighter when she heard the tread of boots on her steps. The front door was
shut. A good thing. The windows were open to the warm September air, but unless the men poked their heads through them they couldn’t see her. Maybe they’d knock and just go away if she stood silent.

That wasn’t likely to happen. The door wasn’t locked, and Curt Whitlow wouldn’t let a closed door stop him. Not when he considered the house his. He wanted to consider her his, but she’d let him know plenty of times that he’d best reconsider on that score.

She kept the gun pointed toward the door with hands that trembled. The same tremble ran through the dog standing against her leg. She wanted to think she was like Asher, more ready than afraid, but not much use lying to herself. She could handle Curt with the gun between them, but two men might tip the scales against her even if she was willing to pull the trigger. She wished she’d gotten a better look at the other man before she stepped back from the window to get her gun. The set of his face might help her judge his purpose there with Curt. She pulled in a long breath to steady her hands and her resolve.

Even though she was prepared for it, the fist banging against the door made her jump. The dog tensed beside her, but didn’t make a sound. It wasn’t like they hadn’t played out this scene time and time again. The only new actor was the stranger.

“Carlyn, open the door. I know you’re in there.” Curt banged on the door again, shaking it against the facing.

“Give the woman a chance to come to the door, Whitlow. You’re apt to scare her beating on the door that way.”

The other man’s voice was calm with a sound of authority. Not what Carlyn expected from someone Curt would bring
as reinforcements to put her out of her house. Carlyn shut her eyes a moment. What was it she’d just thought about not lying to herself? It wasn’t her house. Not anymore. She hadn’t been able to pay Curt Whitlow his due on it. He’d let her ride for almost a year because of Ambrose fighting for the Union, but when Ambrose didn’t come home after the war ended, his patience ran out.

In the spring, he’d hinted she could find other ways to pay him. Through the summer the hints had become more like threats. It didn’t seem to matter to him that he had a Mrs. Whitlow and a houseful of children back in town. He told Carlyn a woman alone had to make her way however she could. He said she could look through the Bible and see that was true. That was when she started keeping the shotgun over the door.

Now he was answering the man outside. “The Widow Kearney’s not that easy to scare.”

If only he knew how that word made her shake inside. Widow. It was harder and harder to believe it wasn’t true. She hadn’t heard from Ambrose since Vicksburg in June 1863. Over two years ago. But she had no proof he was dead. The army said missing. Missing wasn’t dead. Ambrose might yet find his way home.

He could have been wounded or laid low by some sickness. In that last letter in 1863, he mentioned suffering fever chills, but he could even now be well enough to start home. It was a hope as fragile as the spun gossamer of a spider web. She knew that. Even so, she’d made Ambrose a promise till death do them part, and until she was sure death had parted them, she’d keep that promise. No matter how many people called her the Widow Kearney.

But vows of faithfulness didn’t keep a roof over her head. Whether or not she was ready to admit being a widow, she was losing her home.

A rap on the door brought her back to the problem at hand. No banging this time. A polite knock.

“Mrs. Kearney, we want to talk to you. That’s all. Mr. Whitlow has asked me to come see if we can work out the problem of the money you owe on the house.”

“There’s nothing to work out, Sheriff. She doesn’t have any money and it’s my house. It’s your job to put her out,” Curt said.

Sheriff. He’d brought the law. And the law was on his side. The man’s voice was steady, calm as ever, when he answered Curt. “We’re not putting anybody out today, Mr. Whitlow. You have to give the woman a chance to find another place.”

“True or not, I suggest you tamp down your eagerness to bring trouble to a widow woman. We’re not putting her out today.”

“If she can’t pay, she’s out. That’s the law and you’re bound to uphold the law.”

“I know my job, Mr. Whitlow.” The sheriff didn’t raise his voice, but his words had a cold edge to them.

“Then do it.” Curt wasn’t backing down. Not this time.

After a moment of silence, there was another sharp rap on the door. “Open the door, Mrs. Kearney. Please.”

The fight drained out of her. She couldn’t spit in the face of the law. She lowered the gun until she was holding it in the crook of her arm with the barrel pointing at the floor. Asher looked up at her with an uncertain wag of his tail.

She clicked her tongue at the dog and pushed a smile across her face. She didn’t want to say the wrong thing and have the sheriff change his mind about setting her out in the road with night coming. At least with his promise, she’d have until morning, maybe longer, to figure out what to do. Or for Ambrose to make a miraculous appearance.

Miracles happened. The Bible was full of them. People coming back from the dead. That mother’s son sitting up on his funeral pyre. Lazarus walking out of his tomb after four days. But even Lazarus hadn’t been missing from the family circle for two years.

One day at a time. That had been her mother’s constant refrain when Carlyn’s preacher father went out evangelizing the world and left them to fend for themselves. Each day had worries enough of its own. No need adding on the ones coming on the morrow. Her mother had shown her where it said that in the Bible.

“He did say please.” Carlyn whispered the words as she touched Asher’s head.

The sheriff was ready to knock again when she pulled open the door. He lowered his hand and swept his eyes to the gun and back to her face. She was right about him being a stranger. He must be new to town, but that didn’t seem right. The sheriff was elected, and it usually took a well-known person to win the votes. But then she hadn’t been to town for months.

With no money to buy anything, she’d made do with what she could grow or barter for with the church folks. She did mending and made soap to exchange for salt, sugar, and tea. The church people felt sorry for her, and while she hated being the object of pity, the fact was her situation had declined
to pitiful. She knew that. She just didn’t know what to do about it. Her father had taken the rest of her family off to Texas before the start of the war. She had no way of getting there even if she could bear the thought of living under her father’s roof again.

The stranger at her door was feeling sorry for her too. The pity in his eyes was even worse than that in the church people’s eyes. Poor Carlyn Kearney. Won’t admit she’s a widow. The man, this sheriff, had probably never had anybody pitying him like that. He looked to be a man who took control and made things happen. Not someone buffeted by the winds of misfortune.

He was even taller than Ambrose and so broad across the shoulders that a lawbreaker would surely think twice before going up against him. Then again, here she was staring straight at him, a gun in her hands. The barrel was pointed at the floor, but that didn’t mean she couldn’t jerk it up if need be.

“See, I told you she’d have a gun, Sheriff.” Curt looked even shorter and rounder than usual standing back in the man’s shadow. His face was red as he pointed at Carlyn and took a step toward her.

The Dating List by Jean C. Joachim
Doubtful Canon by Johnny D Boggs
I Will Find You by Joanna Connors
Bound to Night by Nina Croft
The Ghost and The Graveyard (The Monk's Hill Witch) by Jack, Genevieve
Morning and Evening Talk by Naguib Mahfouz
Finding Kate Huntley by Theresa Ragan
The Turning by Tim Winton
River of Mercy by BJ Hoff
More Than Magic by Donna June Cooper
Our partner