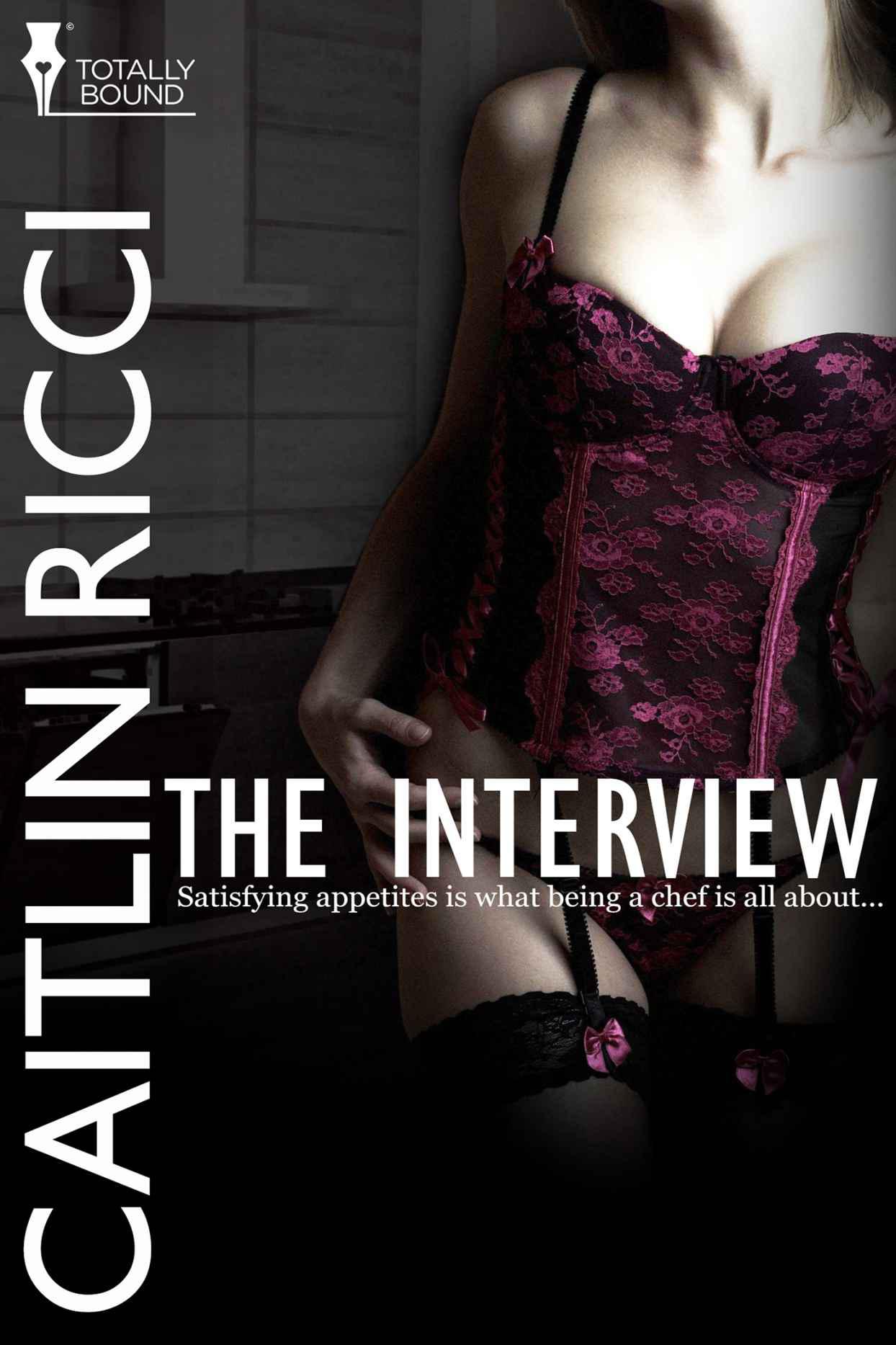 This story contains 29 pages, additionally there is also a
free excerpt
at the end of the book containing 9 pages.

Jacob might be just what Chef Anne needs, not only in her restaurant but in her bed as well. Here’s hoping he likes being tied…

Chef Anne is ready to move on from her first restaurant but she’s not going to leave her baby with just anyone. Plenty have applied for the position of executive chef and all have failed miserably. She expects perfection and knows with the right candidate she’ll get just that. A colleague’s request to give his son a chance may be exactly what she needs.

Jacob has grown up well from the last time she saw him, now a broad-shouldered hunk that makes her think about far more than simply food. But inviting this young chef into her bed might be more complicated than she bargained for. He’s her colleague’s son, after all. Then again, satisfying appetites is what being a chef is all about, and she does aim to please.

This is for everyone out there who enjoys a little play mixed in with their work.

Mr Sims was much as she had expected—a chef from head to toe, coming into her building’s lobby wearing a neatly pressed black jacket and chef trousers. He looked younger than she’d expected though, his twenty-five years looking more like twenty-one. Even in the grainy black and white security system feed, she knew he was going to be trouble. Jacob, as she fondly remembered calling him back when she’d first met him as a highly strung teenager fighting back against the pressures of living under his parents, had apparently grown up well.

Anne turned and checked her appearance in her bedroom mirror. Shaking her head, she knew the pretty, pale pink sweater and dark blue jeans wouldn’t do for today. Maybe for meeting anyone else, but not now that she’d seen the all-grown-up version of Jacob Sims. He’d been cute as a teenager but that forbidden image had turned into something greater than simply attractive. She glanced at the security feed again and licked her lips. No, he was much more than what she had anticipated, and the thrill of having the handsome man so close made a shiver run along her spine.

She stripped quickly then put her jeans and sweater over the back of her cream reading chaise. It wouldn’t take Jacob long to get upstairs, especially if he took the elevator. But she didn’t need a lot of time to step into a short, flowing tan skirt and a button down lace shirt either. She’d been barefoot before, which was comfortable but not exactly sexy. Some strappy heels completed her outfit and she was sitting at her dining room table by the time a loud knock sounded on her front door.

“Come in,” she called, adding a bit of a sultry edge to her voice. There was no guarantee the wide-shouldered, black-haired man would even be interested, she reminded herself, but it never hurt to try.

“Hello, Jacob,” she greeted him, smiling. “Did you bring your knives?” Anne didn’t get up to meet him, instead she crossed one leg over the other, letting her loose skirt slide up her thigh. She watched for any reaction, any telltale sign that he was interested in her. His father had said he’d been available, but parents rarely knew, and if he were seeing someone she’d stop this play. But if he wasn’t, this afternoon was going to get very interesting indeed.

Anne nodded, pleased. He was disciplined and well trained. All of his professors at the culinary institute had said so. He’d probably called his parents ‘Chef’ more often than ‘Mom’ or ‘Dad’.

He stood in her entryway, her beautiful kitchen between them. Though he said nothing, the way his eyes drifted to her double ovens, her gas, six-burner stove and the pristine white granite counter tops told her he was envious of her set up. Good, she’d worked very hard for many years and had given up a great deal personally to be able to have everything she did now.

“With your knives, you’re all ready for the interview,” she informed him. “Ale is my baby, the first restaurant I opened less than six months after graduating from the culinary institute. I was told that I was crazy for buying a restaurant when I was so young, that I needed more training.” She curled her fingers around the spindled oak back of her chair. “But Ale has grown and blossomed for ten years now. It has been the restaurant to beat for the past four years in a row and I intend to keep that tradition going with the next executive chef to take it over.”

“Yes, Chef.” His response was strong and Anne believed he might be the one to take her restaurant over. His training certainly suggested it. And he had pride to spare.

“When your father suggested that I interview you for the position, I was hesitant,” she continued. His face fell, but his smile didn’t slip. She had to know that he could take criticism along with compliments. Maybe by the end of this interview, he’d figure out that everything was a test of his resolve to prove he could be her next executive chef. She would never allow someone weak to be under her, in bed or on the line. “But he assured me that you not only possess the necessary skills but also the heart for this profession. Do you think you do?”

His gaze didn’t waver from hers. “Yes, Chef.”

Smiling, Anne nodded. “Then don’t prove him wrong. Make me your signature dish. My pantry and fridge are both well stocked. You’ve got an hour. Begin.”

Unlike the last three idiots she’d interviewed, Jacob didn’t hesitate at this stage. He simply acted. The first man she’d interviewed hadn’t finished in the allotted hour, but at least he’d tried. The second had looked at her dumbly, not understanding what she was asking for. The third had made her a simple salad that had taken all of five minutes for him to toss together then over-dress. She’d thrown him out promptly.

Jacob glanced up at her from time to time as he gathered things from her orderly kitchen. She’d set up her home like she did her restaurant intentionally. The transition was effortless for her, as it should be for him. Though a chef didn’t need to live his career outside of the restaurant, it should be in his everyday thoughts and actions. Quality, precision, timing. These foundations were everything, and mattered just as much as taste, presentation and creativity to her.

Anne watched him carefully, judging not only his knife work but his discipline as well. It took a rare person to thrive as an executive chef. The wrong choice in a new hire could kill an established restaurant. The right one would grow with it. Too often, owners settled for less than perfect because of a need to fill that spot in their line. Fortunately for Anne, she had no real need to move on. It was time and she had desires of opening a second restaurant. But there was no immediacy that came with that decision. She’d wait as long as she had to in order to find the perfect fit for her beloved Ale. Nothing less than that would do.

“Tell me what you’re doing,” she instructed.

He faltered for a moment, appearing unsure of himself, but he had to do this as well in her line. There were always times when an executive chef had to instruct a sous chef about a particular skill or style of doing something. In her restaurant she was the leader as well as a teacher. Her top candidate would have to be as well.

“I’m seasoning the potatoes with rosemary and a pinch of salt,” Jacob answered her.

His full lips quirked up into a smile. “Salt brings out the flavor of most foods, just like acidity does, and rosemary gives potatoes a sweet, earthy taste that will go perfectly with the steak I’m making.”

He worked as he spoke, just as Anne had expected him to. Being a TV chef’s son meant he’d probably spent many hours helping his mom prepare for an episode. Anne didn’t know his mother well, not as well as she knew his father anyway, but she’d seen her shows a few times. She’d even watched her perform once a few years back, when Anne had been a guest chef on Taste, the network that aired his mom’s program. Sadly the name of it escaped her at that moment.

Jacob brought the steak out of the fridge, letting it warm to room temperature. Though she was proud of him for remembering to let the meat come to temperature before finishing it off, she showed no reaction. He had to know that he was doing the correct thing because it was what he’d been told to do, not because she encouraged him at each step.

She parted her lips and quickly licked them. He was beautiful to watch, his concentration on his task complete as he moved around her large kitchen. A warmth grew in her core and spread through her breasts and thighs at the sight of him. Her nipples strained against the silk of her bra and she took a sip of the cucumber water beside her, eager to sate her desire for him but needing to cool it for the moment. If he was as good in bed as he was in her kitchen, she’d be quite satisfied this afternoon. He would be too, she’d make sure of it of course…but she wasn’t thinking about him for the moment.

Selfishness, ambition and drive were hardly unique to their field, but without them a good chef could never be great. And she needed great. Nothing less than that would do.

He pulled out her stove-top grill and waited for it to get hot. A bit uncertain of him and his methods, she watched him intently. He had to get this part right. Everything else had to be perfect as well, but potatoes could be saved, as could whatever else he served with her steak. But a steak, once ruined, was impossible to make right again. And so she watched, her breath catching, as he moved the potatoes around the pan with some butter and rosemary and waited for the pan to heat until that perfect moment when it was just right. He seasoned the meat with a bit of salt and pepper and put it down on the grill. The inviting sound of a loud sizzle went through her kitchen and she smiled, knowing he’d gotten that part right. He wasn’t out of the clear yet but he was much closer, and he’d managed to impress her with his knowledge of simple food as well.