Read The Invention of Nature Online

The Invention of Nature 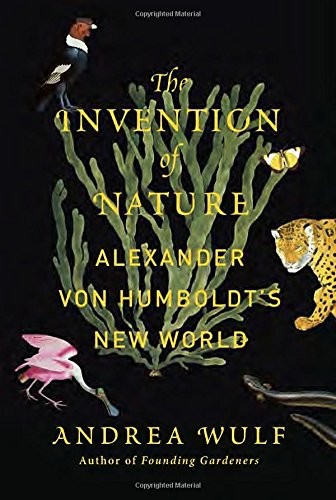 Chasing Venus: The Race to Measure the Heavens

Founding Gardeners: The Revolutionary Generation, Nature, and the Shaping of the American Nation

The Brother Gardeners: Botany, Empire and the Birth of an Obsession

This Other Eden: Seven Great Gardens and 300 Years of English History (with Emma Gieben-Gamal)

THIS IS A BORZOI BOOK

PUBLISHED BY ALFRED A. KNOPF

Close your eyes, prick your ears, and from the softest sound to the wildest noise, from the simplest tone to the highest harmony, from the most violent, passionate scream to the gentlest words of sweet reason, it is by Nature who speaks, revealing her being, her power, her life, and her relatedness so that a blind person, to whom the infinitely visible world is denied, can grasp an infinite vitality in what can be heard.

3. In Search of a Destination

5. The Llanos and the Orinoco

20. The Greatest Man Since the Deluge

A Note on Humboldt’s Publications

Alexander von Humboldt’s books have been published in many languages. When quoting from his books directly, I have compared the original German (where applicable) and contemporary English editions. Where newer English editions have been available, I have checked those against the older translations and where I felt that the newer edition provided a better translation, I have chosen that version (details are in the endnotes). Sometimes neither translation captured Humboldt’s prose, or whole sentences were missing – in which case I have taken the liberty of providing a new translation. When other protagonists referred to Humboldt’s work, I have used the editions that they were reading. Charles Darwin, for example, read Humboldt’s Personal Narrative that was published in Britain between 1814 and 1829 (translated by Helen Maria Williams), while John Muir read the 1896 edition (translated by E.C. Otte and H.G. Bohn).

THEY WERE CRAWLING on hands and knees along a high narrow ridge that was in places only two inches wide. The path, if you could call it that, was layered with sand and loose stones that shifted whenever touched. Down to the left was a steep cliff encrusted with ice that glinted when the sun broke through the thick clouds. The view to the right, with a 1,000-foot drop, wasn’t much better. Here the dark, almost perpendicular walls were covered with rocks that protruded like knife blades.

Alexander von Humboldt and his three companions moved in single file, slowly inching forward. Without proper equipment or appropriate clothes, this was a dangerous climb. The icy wind had numbed their hands and feet, melted snow had soaked their thin shoes and ice crystals clung to their hair and beards. At 17,000 feet above sea level, they struggled to breathe in the thin air. As they proceeded, the jagged rocks shredded the soles of their shoes, and their feet began to bleed.

It was 23 June 1802, and they were climbing Chimborazo, a beautiful dome-shaped inactive volcano in the Andes that rose to almost 21,000 feet, some 100 miles to the south of Quito in today’s Ecuador. Chimborazo was then believed to be the highest mountain in the world. No wonder that their terrified porters had abandoned them at the snow line. The volcano’s peak was shrouded in thick fog but Humboldt had nonetheless pressed on.

For the previous three years, Alexander von Humboldt had been travelling through Latin America, penetrating deep into lands where few Europeans had ever gone before. Obsessed with scientific observation, the thirty-two-year-old had brought a vast array of the best instruments from Europe. For the ascent of Chimborazo, he had left most of the baggage behind, but had packed a barometer, a thermometer, a sextant, an artificial horizon and a so-called ‘cyanometer’ with which he could measure the ‘blueness’ of the sky. As they climbed, Humboldt fumbled out his instruments with numb fingers, setting them upon precariously narrow ledges to measure altitude, gravity and humidity. He meticulously listed any species encountered – here a butterfly, there a tiny flower. Everything was recorded in his notebook.

At 18,000 feet they saw a last scrap of lichen clinging to a boulder. After that all signs of organic life disappeared, because at that height there were no plants or insects. Even the condors that had accompanied their previous climbs were absent. As the fog whitewashed the air into an eerie empty space, Humboldt felt completely removed from the inhabited world. ‘It was,’ he said, ‘as if we were trapped inside an air balloon.’ Then, suddenly, the fog lifted, revealing Chimborazo’s snow-capped summit against the blue sky. A ‘magnificent sight’, was Humboldt’s first thought, but then he saw the huge crevasse in front of them − 65 feet wide and about 600 feet deep. But there was no other way to the top. When Humboldt measured their altitude at 19,413 feet, he discovered that they were barely 1,000 feet below the peak.

No one had ever come this high before, and no one had ever breathed such thin air. As he stood at the top of the world, looking down upon the mountain ranges folded beneath him, Humboldt began to see the world differently. He saw the earth as one great living organism where everything was connected, conceiving a bold new vision of nature that still influences the way that we understand the natural world.

Humboldt and his team climbing a volcano (Illustration Credit prl.1)

Described by his contemporaries as the most famous man in the world after Napoleon, Humboldt was one of the most captivating and inspiring men of his time. Born in 1769 into a wealthy Prussian aristocratic family, he discarded a life of privilege to discover for himself how the world worked. As a young man he set out on a five-year exploration to Latin America, risking his life many times and returning with a new sense of the world. It was a journey that shaped his life and thinking, and that made him legendary across the globe. He lived in cities such as Paris and Berlin, but was equally at home on the most remote branches of the Orinoco River or in the Kazakh Steppe at Russia’s Mongolian border. During much of his long life, he was the nexus of the scientific world, writing some 50,000 letters and receiving at least double that number. Knowledge, Humboldt believed, had to be shared, exchanged and made available to everybody.

He was also a man of contradictions. He was a fierce critic of colonialism and supported the revolutions in Latin America, yet was chamberlain to two Prussian kings. He admired the United States for their concepts of liberty and equality but never stopped criticizing their failure to abolish slavery. He called himself ‘half an American’, but at the same time compared America to ‘a Cartesian vortex, carrying away and levelling everything to dull monotony’. He was confident, yet constantly yearned for approval. He was admired for his breadth of knowledge but also feared for his sharp tongue. Humboldt’s books were published in a dozen languages and were so popular that people bribed booksellers to be the first to receive copies, yet he died a poor man. He could be vain, but would also give his last money to a struggling young scientist. He packed his life with travels and incessant work. He always wanted to experience something new and, as he said, ideally, ‘three things at the same time’.

Humboldt was celebrated for his knowledge and scientific thinking, yet he was no cerebral scholar. Not content in his study or among books, he threw himself into physical exertion, pushing his body to its limits. He ventured deep into the mysterious world of the rainforest in Venezuela and crawled along narrow rock ledges at a precarious height in the Andes to see the flames inside an active volcano. Even as a sixty-year-old, he travelled more than 10,000 miles to the remotest corners of Russia, outpacing his younger companions.

Fascinated by scientific instruments, measurements and observations, he was driven by a sense of wonder as well. Of course nature had to be measured and analysed, but he also believed that a great part of our response to the natural world should be based on the senses and emotions. He wanted to excite a ‘love of nature’. At a time when other scientists were searching for universal laws, Humboldt wrote that nature had to be experienced through feelings.

Humboldt was unlike anybody else because he was able to remember even the smallest details for years: the shape of a leaf, the colour of soil, a temperature reading, the layering of a rock. This extraordinary memory allowed him to compare the observations he had made all over the world several decades or thousands of miles apart. Humboldt was able to ‘run through the chain of all phenomena in the world at the same time’, one colleague later said. Where others had to ransack their memories, Humboldt – ‘whose eyes are natural telescopes & microscopes’ as the American writer and poet Ralph Waldo Emerson said in admiration – had every morsel of knowledge and observation to hand at an instant.

As he stood on Chimborazo, exhausted by the climb, Humboldt absorbed the view. Here vegetation zones were stacked one on top of the other. In the valleys, he had passed through palms and humid bamboo forests where colourful orchids clung to the trees. Further up he had seen conifers, oaks, alders and shrub-like berberis similar to those he knew from European forests. Then had come alpine plants much like those he had collected in the mountains in Switzerland and lichens that reminded him of specimens from the Arctic Circle and Lapland. No one had looked at plants like this before. Humboldt saw them not through the narrow categories of classification but as types according to their location and climate. Here was a man who viewed nature as a global force with corresponding climate zones across continents: a radical concept at the time, and one that still colours our understanding of ecosystems.

The distribution of plants in the Andes (Illustration Credit prl.2)

Humboldt’s books, diaries and letters reveal a visionary, a thinker far ahead of his time. He invented isotherms – the lines of temperature and pressure that we see on today’s weather maps – and he also discovered the magnetic equator. He came up with the idea of vegetation and climate zones that snake across the globe. Most important, though, Humboldt revolutionized the way we see the natural world. He found connections everywhere. Nothing, not even the tiniest organism, was looked at on its own. ‘In this great chain of causes and effects,’ Humboldt said, ‘no single fact can be considered in isolation.’ With this insight, he invented the web of life, the concept of nature as we know it today.

The Barefoot Princess by Christina Dodd
Ameristocracy by Moxham, Paul
Shades of Grey by Jasper Fforde
A Little Bit Can Hurt by Decosta, Donna
Six Miles From Nashville by Elaine Littau
Her One True Love by Rachel Brimble
Intrigue by Rychener, Stacey
[Shadowed Path 01] - A Woman Worth Ten Coppers by Morgan Howell
Blades of Valor by Sigmund Brouwer
David the Prince - Scotland 03 by Nigel Tranter
Our partner