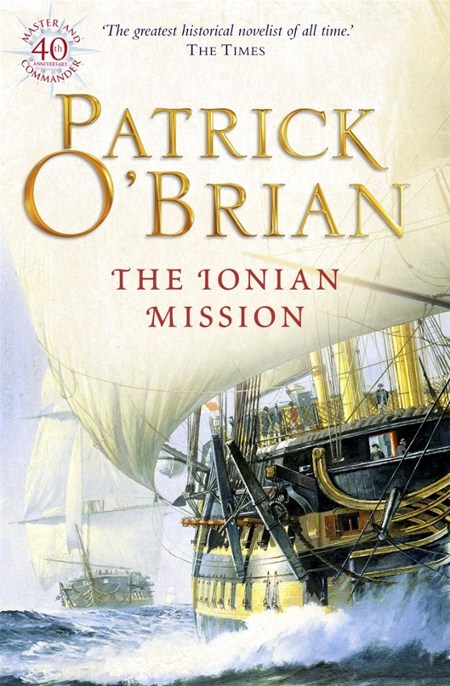 Patrick O'Brian is the author of the acclaimed Aubrey-Maturin tales and the biographer of Joseph Banks and Picasso. His first novel,
Testimonies
, and his
Collected Short Stories
have recently been reprinted by HarperCollins. He translated many works from French into English, among the novels and memoirs of Simone de Beauvoir and the first volume of Jean Lacouture's biography of Charles de Gaulle. In 1995 he was the first recipient of the Heywood Hill Prize for a lifetime's contribution to literature. In the same year he was awarded the CBE. In 1997 he was awarded an honurary doctorate of letters by Trinity College, Dublin. He died in January 2000 at the age of 85.

The Works of Patrick O'Brian

in order of publication

THE FORTUNE OF WAR

THE FAR SIDE OF THE WORLD

THE REVERSE OF THE MEDAL

THE LETTER OF MARQUE

THE NUTMEG OF CONSOLATION

BLUE AT THE MIZZEN

LYING IN THE SUN

A BOOK OF VOYAGES

Previously published in paperback by HarperCollins 1993

Also published in paperback by Fontana 1982

Copyright © The estate of the late Patrick O'Brian CBE 1981

Set in Imprint by

All rights reserved. no part of this publication may be reproduced, stored in a retrieval system, or transmitted, in any form or by any means, electronic, mechanical, photocopying, recording or otherwise, without the prior permission of the publishers.

This book is sold subject to the condition that it shall not, by way of trade or otherwise, be lent, re-sold, hired out or otherwise circulated without the publisher's prior consent in any form or binding or cover other than that in which it is published and without a similar condition including this condition being imposed on the subsequent purchaser.

The Royal Navy of Nelson’s time was much given to music and poetry: no wardroom was complete without half a dozen German flutes and every month the
Naval Chronicle
published several pages of verse by officers on active service or half-pay. These poems presumably show naval talent at its highest, and they provide excellent material for a writer who wishes to show this perhaps unexpected side of the sailor’s life but who feels that his own pastiches cannot possibly give the same impression of authenticity. Yet the somewhat less accomplished pieces that never reached print are even more valuable: I have come across a certain number of them in the library at Greenwich, but to my knowledge there is no mine so rich as the
Memoirs of Lieutenant Samuel Walters, RN
, which remained in manuscript until 1949, when the Liverpool University Press published them, admirably edited by Professor Northcote Parkinson, to whom I make all proper acknowledgements for the lines I have borrowed.

Marriage was once represented as a field of battle rather than a bed of roses, and perhaps there are some who may still support this view; but just as Dr Maturin had made a far more unsuitable match than most, so he set about dealing with the situation in a far more compendious, peaceable and efficacious way than the great majority of husbands.

He had pursued his strikingly beautiful, spirited, fashionable wife for years and years before marrying her in mid-Channel aboard a man-of-war: for so many years indeed that he had become a confirmed bachelor at last, too old a dog to give up his tricks of smoking tobacco in bed, playing his 'cello at odd untimely moments, dissecting anything that interested him, even in the drawing-room; too old to be taught to shave regularly, to change his linen, or to wash when he did not feel the need—an impossible husband. He was not house-trained; and although he made earnest attempts at the beginning of their marriage he soon perceived that in time the strain must damage their relationship, all the more so since Diana was as intransigent as himself and far more apt to fly into a passion about such things as a pancreas in the drawer of the bedside table or orange marmalade ground into the Aubusson. And then again his deeply-ingrained habits of secrecy (for he was an intelligence-agent as well as a physician) made him even more unsuited for domestic life, which withers in the presence of reserve. He therefore gradually retired to the rooms he had long retained in an old-fashioned comfortable shabby inn called the Grapes, in the liberties of the Savoy, leaving Diana in the handsome modern house in Half Moon Street, a house shining with fresh white paint and new-furnished with elegant but fragile satinwood.

It was in no way a parting; there was no sort of violence or ill-will or disagreement about Stephen Maturin's fading away from the intense social life of Half Moon Street to the dim, foggy lane by the Thames, where he could more easily attend the meetings of the Royal Society, the College of Surgeons, or the entomological or ornithological societies that interested him so very much more than Diana's card-parties and routs, and where he could more safely carry out some of the delicate business that fell to his lot as a member of the naval intelligence department, business that necessarily had to be kept from the knowledge of his wife. It was not a parting in any sense of unkindness, but a mere geographical separation, one so slight that Stephen usually covered it every morning, walking up through the Green Park to breakfast with his wife, most often in her bedroom, she being a late riser; while he nearly always appeared at her frequent dinner-parties, playing the part of host to admiration, for he could be as smooth and complaisant as the most civilized of her guests so long as he was not required to keep it up too long. In any case Diana's father and her first husband were serving officers and all her life she had been accustomed to separation. She was always delighted to see her husband and he to see her; they never quarrelled now that all reasons for disagreement were gone; and in fact this was probably the best possible arrangement for a pair with nothing in common but love and friendship, and a series of strange, surprising, shared adventures.

They never quarrelled, except when Stephen brought up the question of marriage according to the Roman rite, for their wedding had been performed in the brisk naval fashion by the captain of HMS
Oedipus
, an amiable young man and a fine navigator but no priest; and since Stephen, being of mixed Irish and Catalan parentage, was a Papist he was a bachelor still as far as the Church was concerned. Yet no persuasion, no kind words (and harsh ones he dared not use) could move Diana: she did not reason, but simply and steadily refused. There were times when her obstinacy grieved him, for apart from his own strong feelings on the matter he seemed to make out some obscure superstitious dread of a strange sacrament mingled with the general English dislike of Rome; yet there were also times when it added a certain not wholly disagreeable air of intrigue to the connection. Not that this ever occurred to the eminently respectable Mrs Broad of the Grapes, who liked her house to be just so and who would countenance nothing whatsoever in the roving line, a landlady who would at once turn away any man she suspected of leading out a wench. Mrs Broad had known Dr Maturin for many years; she was thoroughly used to him; and when he told her that he meant to stay at the inn she only stared for a while, amazed that any man born could sleep away from such a ravishing lady; and then accepted it as 'one of the Doctor's little ways' with perfect calm. Some of his little ways had indeed been quite surprising in the past, seeing that they ranged from the quartering of badgers, rescued from a baiting, in her coal-shed to the introduction of separate limbs and even of whole orphans for dissection when they were in good supply towards the end of winter; but she had grown used to them little by little. The Doctor's 'cello booming through the night and skeletons in every cupboard were nothing now to Mrs Broad; and nothing now could astonish her for long. She also thoroughly approved of Diana, whom she had come to know well during her first startled stay at the inn, where Stephen had brought her when they landed in England. Mrs Broad liked her for her beauty, which she candidly admired, and for her friendliness ('no airs nor graces, and not above taking a little posset with a person behind the bar') and for her evident affection for the Doctor. Mrs Maturin was very often at the Grapes, bringing shirts, blue worsted stockings, shoe-buckles, leaving messages, darting in for small sums of money, for although Diana was far richer than Stephen she was even more improvident. It seemed a strange kind of marriage, but Mrs Broad had once seen Mrs Maturin in one of the palace coaches with Lady Jersey—royal footmen up behind—and she had an indistinct notion that Diana was 'something at Court', which would naturally prevent her from living like mortal of ordinary flesh and blood.

Vengeance Road by Rick Mofina
KOP Killer by Warren Hammond
The Reluctant Berserker by Beecroft, Alex
Travelers' Tales Paris by James O'Reilly
The Heretics by Rory Clements
Royal Pain in the Ass by Trudy, Heather
As It Is On Telly by Marshall, Jill
Trapped by Black, Cassie
The Space in Between by Melyssa Winchester
Blood Feud by J.D. Nixon
Our partner