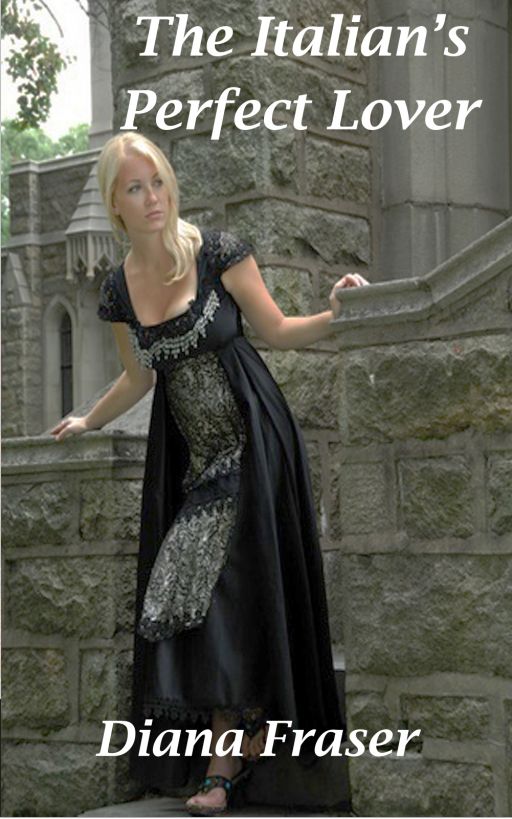 For more information about this author visit:

This is a work of fiction. Names, characters,
places and incidents are either the product of the author’s
imagination or are used fictitiously. Any resemblance to actual
persons, living or dead, organizations, events or locales is
entirely coincidental.

All rights reserved. Except as permitted
under the US Copyright Act of 1976, no part of this publication may
be reproduced, distributed, or transmitted in any form or by any
means, or stored in a database or retrieval system, without the
prior written permission of the author.

Alessandro Cavour, Conte di Montecorvio
Rovella, watched as the voluptuous blonde, who had just
gate-crashed his party, popped a third piece of bruschetta into her
mouth.

If she was trying to fit in she was going the
wrong way about it. Women in his world barely ate; they wore only
black—not a blood-red sheath—and curves were not an option.

“Shall I have her removed, sir?”

Emily Carlyle brushed the crumbs from her
dress and anxiously scanned the room for the elderly count upon
whom all her hopes were pinned.

She needed to mingle. God, how did she do
that?

She needed to fit in. And she certainly
didn’t do that.

Her hand rose to push her glasses more firmly
on her nose before she remembered she’d left them off tonight. Not,
she thought, peering around the room, that there had been any
point.

She was surrounded by the cream of Neopolitan
society: moneyed, elegant, perfect. And she was none of these
things. And never would be.

She tugged the wrap more securely around her
shoulders. She might not be ashamed of her imperfections but there
was no reason to display them—not tonight—not when so much was
riding on it.

Where the hell was he?

Suddenly she felt a chill of awareness
slither down her spine: someone was watching her. She turned slowly
to see a man—blurred a little at first—moving through the crowded
room towards her, staring directly at her. When he came into focus
she could see his coal-black eyes held both heat and cool control:
predator’s eyes.

Her heart pounded once, fiercely, before
settling into a fast tattoo that sent adrenalin racing through her
veins, stimulating her body into a state of readiness. Fight or
flight? At that instant, she could do neither.

Then the crowd parted and the man emerged and
stood before her. There was nothing about his appearance that
contradicted her first instinct. A predator took whatever he wanted
and she knew this man could do just that. It wasn’t just that he
was the most striking man she’d ever seen; it wasn’t simply that he
was the most charismatic—although conversations had stalled in his
wake and all eyes were on him; it was his difference to the others
that signaled his power.

In a room of immaculately dressed people,
this man stood before her disheveled and arrogant. His black tie
hung loosely either side of his open shirt and his hair—raked back
as if by careless fingers—hung in tactile curls on his collar. He
either didn’t notice he was flouting convention or he didn’t care.
She’d bet her life it was the latter.

There, they had something in common.

She stepped back to move out of his way.
Because she hadn’t lived twenty-six years without knowing that men,
that gorgeous, didn’t make a bee-line for her.

But he also side-stepped so he stood squarely
in front of her.

He looked even better close up. She was
preternaturally aware of the textures on his face: a day’s worth of
stubble, the lines that bracketed his mouth and of an errant curl
that fell like a question mark on his forehead.

That men like this existed, she’d never
imagined. That one could be touching her arm, with an intimacy that
sent shivers down her spine, was impossible.

“Sure, sorry,” she mumbled, stepping aside so
he could pass.

He smiled. “No, signorina. It is you I’ve
come to speak with.”

She could feel her eyes widen in shock and
opened her mouth to reply only to find her voice had somehow
diminished to a whisper.

“I think you’ve got the wrong woman.”

Her eyes dropped to his lips: amusement
flickered at their corners.

“And who would be the right woman?”

She shrugged. “Anyone else.”

He frowned. “Your husband or boyfriend is
here?”

Her irritation, at his presumption that a
boyfriend would be the only reason why she wouldn’t want to talk
with him, should have brought her back to her senses.

“We can remedy that—”

“And I can’t think why you would want to
speak with me. Perhaps you’ve mistaken me for someone else?”

“I always make it a point to speak to the
most beautiful woman in the room. And if I’ve mistaken you for
such, then perhaps it is because you are.”

The instinctive laugh froze on her lips.
There was something about his manner, about his tone, about the
expression in his eyes, which stopped her reacting with her usual
self-deprecating humor.

She knew it to be a lie but
how
persuasive,
how
devastating, it was to hear such words
addressed to her. She’d spent years avoiding her femininity, scared
of being seen as an object. Bitter experience had taught her that
objects could be owned and possessed and people did what they liked
with their possessions, even tried to destroy them.

Now, she’d just walked straight into what
she’d been avoiding all these years. And it thrilled her like
nothing before.

She took a deep breath in order to ground
herself. “Thank you for the compliment.”

His lips curved briefly into a smile that
lingered in the lines around his mouth and in the flicker of heat
in his eyes.

His candor dispelled her nerves and, for the
first time, she glanced away from him, trying to suppress a
smile.

“What gave me away? I guess it’s the dress,”
she looked down frowning at the red dress. “Hardly the usual color,
it would seem.”

“You stand out. But it is not that
alone.”

“What then?” She grabbed the ends of the
shawl to make sure they stayed in place and folded her arms across
her breasts. “I guess I eat, which clearly sets me apart from the
other women.”

“It does.” He leaned forward and whispered
conspiratorially in her ear. “And a very good thing, too. But it is
not that either.”

“Your lack of awareness.”

“People. My guess is that you don’t attend
many such parties.”

“And you would know this because?”

He hesitated for one long second, enough for
her to note the shading under his eyes and the stark lines of his
cheek and jaw. The predator was hungry.

“Because you look and don’t see; you don’t
notice the inquisitive stares, the jealous looks, the admiring
glances. They don’t affect you. I think you must live away from
society—some kind of recluse, maybe?”

Emily could feel the blood drain out of her
face. How could he tell? How could he know that her world, as an
archaeologist, was the world of the past, where the only people who
mattered had been dead for centuries?

She nodded, spellbound by this man who could
see into her heart.

Part of her knew it to be the result of
clever, well-honed flirtation skills, pick-up lines well learnt,
but the greater part of her didn’t care. She felt a connection with
him slide smoothly into place.

“How did you know?” Her voice, normally so
strong and so confident, sounded cracked, fractured.

“By your lack of consciousness—in your body,
but most of all in your eyes.” He cocked his head to one side.
“Green eyes.”

She gasped down a lungful of air like a dying
woman desperate for life and shook her head.

“You,” he brushed her cheek with the back of
his finger, “are too prosaic. Your eyes are green. Unusual. A dark
green: the color of a pine forest in twilight, of wet,
gold-streaked jade, the color of a secret. What, I wonder, is
yours?”

Somehow the stranger had brought himself so
close to her that she could smell his intoxicating blend of
aftershave—earthy, warm and very, very male—and whisky.
Imperceptibly—surely he would hardly notice—she dipped her head
towards his neck and inhaled his more personal scent. She swallowed
and looked away as she felt the heat fire deep inside her, stirring
something she’d thought long dead, never to be revived.

She felt his own face incline to hers briefly
in response. The feel of his hair grazing her cheek made her jump
back in alarm.

She balked for an instant at his imperious
command. But then he ran his fingers down her shawl-covered arm
until he held her hand, and all resistance fled.

“Let’s escape.” He nodded towards the open
French windows.

As he pulled her outside, the sultry stir of
the evening breeze awakened Emily from the haze of lust this man
stirred.

She hesitated, and stopped abruptly. What was
she doing?

“It should have been sooner. I’m not in the
habit of wandering around in the dark with strangers. I don’t even
know your name.”

“M? That is an unusual name.” He raised an
eyebrow. “Not the ‘M’ from James Bond, not the secret head of
MI5?”

She grinned, relaxing, the tension falling
away. “No, not.”

“Perhaps short for Miranda, or Miriam?”

Disappointment bit deep. She’d tried hard to
fit in, had made a massive leap outside her comfort zone, borrowing
a dress and too-tight shoes, but had still failed. But there was
too much riding on it. She needed to see the count, even if it
meant bluffing her way back inside.

“What makes you think I haven’t been
invited?”

He dipped his head, uncomfortably close to
hers.

“Cara,” his breath tickled her skin and made
her halt her own breathing. “I know you haven’t. It is my party and
I know everyone here, except you.”

His words cut like ice, severing her last
remaining thread of hope.

He had no interest in her. And he’d
effectively killed her work stone dead because if she couldn’t see
the count, she had nothing. Without the count’s financial support
her work would have to end.

“You misunderstand me. I do not wish you to
go.”

She looked up at him, at this knowing man
who’d broken through her defenses after all these years, willing
him to contradict her.

He smiled, as if recognizing the token
comment for what it was.

“And neither should I, believe me. I should
be at the party, but I have never been interested in duty. It is
pleasure that interests me.”

“Come,” he offered his arm, “let’s leave the
party before someone either turns you away, or worse still, forces
me to do my duty and make small talk.”

She laughed. “Somehow, I can’t imagine anyone
forcing you to do anything.” And then she hesitated.

Thoughts of caution flashed through her mind,
fighting the instincts and needs of her body.

But her body won and she inhaled the fragrant
night air and took his arm.

The Forgiven The Fallen The Forsaken by Armstrong, S.M.
Dragon's Complete Desire: The Killington Dragons (Paranormal Romance) by Meg Ripley
Weighed in the Balance by Anne Perry
The Nursing Home Murder by Ngaio Marsh
The Witchfinder Wars by K.G. McAbee
Horrible Harry Goes to Sea by Suzy Kline
Private Pleasures by Bertrice Small
It Must Be Magic by Jennifer Skully
Cold Case at Carlton's Canyon by Rita Herron
Shades of the Past by Sandra Heath
Our partner