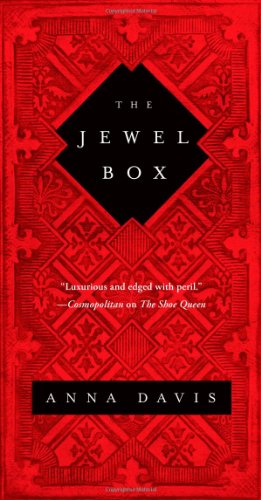 “Have you ever been in love?” he asked, without blinking.

In her head she saw a young man in uniform with red hair. She blinked the image away. “No,” she said. “Not really. How about you?”

“I loved a woman who died.”

“I’m sorry.” She looked away, gulped from her cocktail.

It was such an odd thing to say that it made her wonder if he’d made it up to shock her.

“And there hasn’t been anyone since?” He seemed to invite this kind of talk—flirtatious in its frankness.

“Of course. I’m perpetually in love. It’s a grand way to be. You should try it some time. You might like it.”

Grace shook her head. “You talk about love the way other people talk about ice cream.”

He shrugged. “One is hot, the other cold. Both taste good.”

“Love isn’t something you can just choose to try.”

“Tell that to her.” Again he indicated the woman in gray. Her face wore an expression that was exquisitely sad. The man in the hat had hold of her hand.

“She doesn’t look like she’s having a ‘grand’ time of it,” said Grace.

“Fiction at its best: fast-paced and dramatic with characters whose motives are rewardingly complex…. A fantastical version of a bohemian reality in which it is a joy to lose yourself.”

“An enjoyable whirlwind of beauty and seduction, with a satisfying dark undercurrent.” 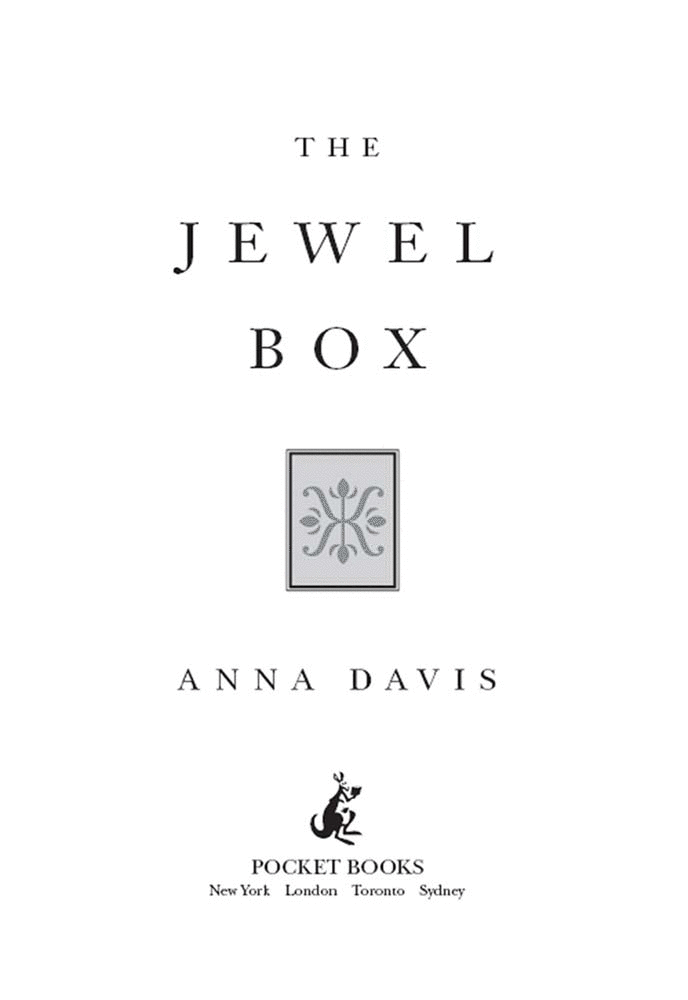 Pocket Books
A Division of Simon & Schuster, Inc.
1230 Avenue of the Americas
New York, NY 10020
This book is a work of fiction. Names, characters, places, and incidents either are products of the author’s imagination or are used fictitiously. Any resemblance to actual events or locales or persons, living or dead, is entirely coincidental.
Copyright © 2009 by Anna Davis
Originally published in Great Britain in 2009 by Doubleday a division of Transworld Publishers
All rights reserved, including the right to reproduce this book or portions thereof in any form whatsoever. For information address Pocket Books Subsidiary Rights Department, 1230 Avenue of the Americas, New York, NY 10020
POCKET and colophon are registered trademarks of Simon & Schuster, Inc.
Library of Congress Cataloging-in-Publication Data
Davis, Anna, 1971-
The jewel box / by Anna Davis.
p. cm.
1. Woman journalists—Fiction. 2. Women—England—Fiction. 3. London (England)—History—1800-1950—Fiction. I Title.
PR6054.A89156J49 2009
823’.914—dc22
2008045263
ISBN-13: 978-1-4391-6347-4
ISBN-10: 1-4391-6347-2
Visit us on the Web:
http://www.SimonandSchuster.com [http://www.SimonandSchuster.com]
For Rhidian and Leo,
with love
Contents

Last night, at the newly opened Salamander Dinner-Dance Club on Coventry Street (they serve one of London’s better steaks au poivre accompanied by brisk, stirring jazz), a louche gentleman in a top hat wreaked violent Charleston on me, and simply would not be shaken off. Today I am officially “In Recovery”—the kind that necessitates a night at home with a fish-paste sandwich and a mug of cocoa. For it’s not merely my head that’s aching—it’s not just the usual ringing of the ears, rasping of the throat and churning of the stomach. No, today my lily-white tootsies are black and blue, too. Reader, I can barely walk!

As you know, it’s been over a year since the Charleston stepped off the boat and took up residence in our better nightclubs. They dance it dandily in Paris and New York. So how much longer is it going to be before the Londoner learns how to do it properly? Men are generally the worst. There’s something, frankly, convulsive about
those kicking, flailing legs. At the Salamander, you take your life in your hands when you step onto the dance floor. In fact, I wouldn’t even advise taking a table
beside
the dance floor. But many of the fairer sex are not so much better—really, there are a lot of farmyard hens strutting about the West End, pecking and flapping.

The solution? Lessons, of course. Trust me, girls, it’s a sound investment. I suggest any of you with a nagging suspicion that your Charleston may be of the feathered, clucking sort should seek out, posthaste, Miss Leticia (known to her friends as “Teenie Weenie”) Harrison, of Mayfair. Take heed: This might change your life. In an ideal world, one would of course take the hubby or boyfriend along to Teenie Weenie’s—but if he thinks he’s too fine and manly for classes, you’ll have to teach him yourself. Let’s face it, we’ve been educating our men in so many departments since long before we—that is, those of us over thirty—got the vote (NB: the under-thirties would have my sympathy were it not for the fact that I covet your tender youth), and we’ll be doing so for as long as men are men and women are women. Embrace your fate.

Two irritating comments that I regularly encounter, of an evening, now my fame is spreading:

“Miss Sharp, where do you find the stamina to go out all night every night? Your job must be the hardest in London.”

“What an easy job you have, Miss Sharp. All you have to do is go out and enjoy yourself and then tell us all about it.”

Also, I am outraged at the reports of various pretenders claiming to be me in order to bag good tables and complimentary cocktails. Doormen, if ever in doubt, ask “Diamond” to blow you a smoke ring. This is a very particular talent of mine, and should instantly reveal any fake gems. Oh, and by the way, I have never in my life had to
ask
for a free drink!

The
photograph shows a woman with flirtatious eyes and sharply bobbed hair. She is seated alone at a restaurant table with an empty champagne glass in front of her. Resting between the first two fingers of her gloved hand is a lit cigarette in a long ebony holder. From her lipsticked mouth, slightly open, issues a perfect smoke ring. The slogan above the photograph is simply, “Dare You?” The small print beneath the image explains that the tobacco in Baker’s Lights is toasted and does not aggravate the throat.

Mr. Aubrey Pearson tossed the proof onto the desk and leaned back against creaky leather upholstery. “Well?”

Grace Rutherford, from the hard wooden seat on the other side of the table, cleared her throat. “Well, Mr. Pearson, I was thinking…”

“Were you? Were you
really
?” The eyebrows moved toward each other in a deep frown. “Did you think for one moment about how our client would react to this?” He indicated the proof.

Grace took a breath. If only she was having this discussion with Mr. Henry Pearson, the older brother. He was altogether more freethinking. “I believe this campaign could increase Baker’s sales by about a third. Maybe more. We’ve never targeted women before—not for cigarettes—and it’s about time we did. This year, London girls are wearing their hair and dresses shorter than ever, copying the Hollywood flapper look. They want the life that goes with it too—dancing the Charleston all night, having romances with dashing young men. It’s the dream. Living life just a little bit wild. Doing things their mothers wouldn’t have done. They all smoke, you know, the Hollywood actresses.”

Mr. Pearson rubbed his head, where the hair was thinning. Perhaps it was thinning
because
he always rubbed it there, in just that spot. “Miss Rutherford, we absolutely cannot have an image of a girl smoking a cigarette in this advertising campaign. We have a reputation to uphold.”

Forever Beach by Shelley Noble
Hopper by Tom Folsom
All In: Betting on a Full House (Gambling With Love) by Lane Hart
Stray by Erin Lark
The Wizard Hunters by Martha Wells
La hora de los sensatos by Leopoldo Abadía
Naughty Wishes 4: Soul by Joey W. Hill
Earth Has Been Found by D. F. Jones
Must Love Dukes by Elizabeth Michels
So 5 Minutes Ago by Hilary De Vries
Our partner