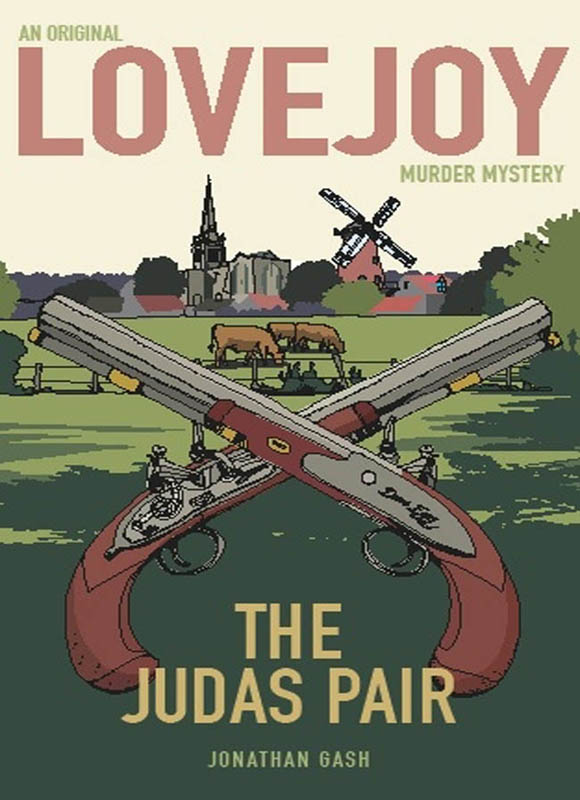 First published in Great Britain in 1977

This paperback edition published by Constable Crime,
an imprint of Constable & Robinson Ltd, 2013

The right of Jonathan Gash to be identified as the author of this work has been asserted by her in accordance with the Copyright, Designs and Patents Act 1988

T
HIS STORY’S ABOUT
greed, desire, love and death – in the world of antiques you get them all.

Just when I was in paradise the phone rang. Knowing it would be Tinker Dill, I pushed her into the bathroom, turned all the taps on and switched the radio on.

‘What the hell’s that noise?’ Tinker sounded half sloshed as usual.

In the White Hart they only had one record that worked and it was notching up the decibels in a background muddle of voices.

‘Got somebody for you,’ he said.

I was all ears. You know that tingling a sexy promise gives? Double it for religion. Treble it for collecting. And for antiques dealers like me, hearing of a customer, multiply by infinity to get somewhere near the drive that forces a man over every conceivable boundary of propriety, common sense, reason – oh, and law. I almost forgot law. I’d been on the nest two days with Sheila (was she Sheila, or was that last Thursday? I couldn’t remember) and here I was, quivering like a selling-plater at its first race. All because one of my scouts was phoning in with a bite.

Scouts? We call them barkers, in the trade. An antiques dealer has scouts, people who will pass information his way. Tinker Dill was one of mine. I have three or four, depending on how rich I’m feeling at the time, paid on commission. Tinker was the best. Not because he was much good, but because he was loyal. And he was loyal because he judged every deal in terms of whisky. Or gin. Or rum.

‘Buying or selling?’ I said, quite casual. Twenty years dealing in antiques and my hands sweating because a barker rings in. It’s a right game.

‘You having me on, Tinker?’ That stupid bird was banging on the bathroom door wanting to be let out.

‘Straight up, Lovejoy,’ he said. All right, all right. I was born with the name. Still, you can’t forget Lovejoy Antiques, Inc., can you? The ‘Inc.’ bit was pure invention, brilliance. It sounds posh, reeks of dollars and high-flying American firms backing that knowledgeable antique wizard Lovejoy.

‘Got enough copper in case the bleeps go?’ I asked.

I dropped the receiver, crossed to open the bathroom door. There she was, trying to push past me into the room, blazing.

‘What the hell do you mean –’ she was starting to say when I belted her. Down she went on the loo amid the steam.

She rubbed her face; her eyes glazed at the enormity of these events. I pinched her cheek, making the nails bite.

‘Yes.’ Her voice barely made it.

‘I’ve got a deal coming in. So – shut your teeth. Sit there and listen to all my lovely hot water going to waste.’

I slammed the door on her, locked it again and found Tinker hanging on by the skin of his alcohol-soaked teeth.

My scalp, already prickling and crawling, gave up as the magic code homed in.

My mind took off. Computers aren’t in it. Speed they’ve got and memory too, so people say. I have both those attributes and a bell. This bell’s in my chest. Put me within a hundred feet of a genuine antique and it chimes, only gently at first, then in a clamour as I get nearer the real thing. By the time I’m touching it I can hardly breathe because my bell’s clanging like a fire engine. It’s never been wrong yet. Don’t misunderstand – I’ve sold some rubbish in my time. And lies come as natural to me as blinking in a gale. After all, that’s life, really, isn’t it? A little half-truth here and there, with a faint hint of profit thrown in for good measure, does no harm. And I make a living, mainly from greed. Not my greed, you understand.
Your
greed, his greed, everybody’s greed. And I want no criticism from self-righteous members of the indignant honest old public, because they’re the biggest school of sharks on this planet. No? Listen:

Say you’re at home, relaxing in your old rocking chair. In comes a stranger. He’s heard of your old – or indeed your
new
– rocking chair. Could it be, he gasps, that it’s the one and only rocking chair last used by Lord Nelson on his flagship the
Golden Hind?
Good heavens, he cries, clapping his eyes on it in ecstasy.
It is
!

Now, you put your pipe down, astonished. What the hell’s going on? you demand. And who the hell is this stranger butting into your house? And what’s he babbling about? And –
take your hands off my old rocking chair!

With me so far? Good.

The stranger, confronted with your indignation, turns sincere and trusting eyes to you. I’ve searched all my life, he explains. For what? you demand suspiciously. For Lord Nelson’s famous old rocking-chair, he confides. And here it is, at last. It’s beautiful. My lifelong search is over.

See what I’m getting at? At everybody’s dishonesty. At mine. And at yours. No?
Yes!
Read on.

Now, if I were a trusting soul, I’d leave you to complete the story, give it a proper ending, so to speak. How you smile at the stranger, explain that the chair’s only a second-hand mock-up your cousin Harry’s lad did at night school, and how in any case Nelson, who is pretty famous for rocking on the cradle of the deep for years on end, was the last bloke on earth ever to need a rocking chair, and how you kindly proceed to put the misguided stranger right over a cup of tea with gay amusing chat. But you can’t be trusted to end the story the way it really would happen! And why? Because the stranger, with the light of crusading fervour burning in his eyes, reaches for his wallet and says those glorious, magic words . . .
How much?

Now what’s the
real
ending of the story? I’ll tell you. You leap off your –
no, Lord Nelson’s!
– rocking chair, brush it down, bring out the Australian sherry left over from Christmas, and cod on you’re the hero’s last living descendant. And you manage to stifle your poor little innocent daughter as she looks up from her history homework and tries to tell the visitor that Nelson missed sailing on the
Golden Hind
by a good couple of centuries, and send her packing to bed so she won’t see her honest old dad shingling this stupid bum of every quid he can.

Convinced? No?
Then why are you thinking of that old chair in your attic?

Everybody’s got a special gift. Some are psychic, some have an extra dress sense, beauty, a musical talent or have green fingers. Some folk are just lucky, or have the knack of throwing a discus. But nobody’s been missed out. We’ve all got one special gift. The only trouble is learning which it is we’ve got.

I had this pal who knew horses – they used to come to him even when he’d no sugar. He and I once collected a Chippendale from near a training stables and we paused to watch these, nags running about like they do. ‘Quid on the big one,’ I said, bored. ‘The funny little chap,’ he said, and blow me if it didn’t leave the rest standing. It was called Arkle, a champion, they told us. See What I mean? To me that tiny, gawky, ungainly brute breathing all wrong was horrible. To my pal it was clearly the best of the lot. Now, to him, a Turner painting – screaming genius over every inch of canvas – would look like a nasty spillage. Not to me. I’ve only to see an 88 bus labelled
TATE GALLERY
and my bell goes like the clappers. Lake I say, a gift.

Once, I bought this dirty old monstrosity for ten quid. It looked for all the world like a little doll’s house with a couple of round windows stuck on, and a great sloping piece of broken tin fixed to the back. The boys at the auction gave me an ironic cheer making my face red as fire. But my bell was bonging. My find was eventually the only original Congreve clock ever to be exhibited within living memory – a clock worked on a spring controlled by a little ball rolling down a groove cut in an inclined plane, designed and made by the great inventor William Congreve almost two hundred years ago.

If you’ve got the courage, find out what your own particular knack is, then trust it. Obey your bells, folks. They’re telling you about cold stone certainties.

S and D’s? Look in any antique shop. Casually, you’ll find yourself wanting some lovely little trinket, say a twist-stem drinking glass. The more you look the more you want it. So you search it for the price, and find a little ticket tied on, marked
HA/-
, or some such.

We use codes, all very simple. One of the most elementary is that based on a letter-number transposition. Each code has a key word – for example, SUTHERLAND. Note that it has ten letters. For S read 1, for U read 2, and so on to N, which is 9. For D read, not 10 but nought, because you already have a letter to denote 1. So the glass goblet you fancied is priced at forty-eight quid. There are several ten-letter codes. A quick look round tips you off.

One further point: X is often used to denote the pound sign, £, or zero. That way, the customer thinks the ticket is something mysterious to do with book-keeping or identification. Not on your life. When in doubt, it’s money. The code-price marked is often what the dealer paid for the glass in the first place, so naturally he’ll stick about fifty per cent on, if not more. And remember you may actually look a mug. In antiques you pay for appearances – yours, the antiques themselves, and the antiques dealer’s wife’s fur coat. So my tip is: argue. Even though it goes against the grain in polite old Britain, never pay the marked price, not even if the dealer offers an immediate discount. Hum and ha, take your time, look doubtful. Spin it out and then, as gently and sincerely as you possibly can, barter.

Spinning Starlight by R.C. Lewis
Horrible Harry and the Mud Gremlins by Suzy Kline
Los señores del norte by Bernard Cornwell
The Murder of Cleopatra by Pat Brown
All Around the Town by Mary Higgins Clark
Declaration to Submit by Leeland, Jennifer
The World That Never Was by Alex Butterworth
Savage Seduction: A Dire Wolves Mission (The Devil's Dires Book 3) by Ellis Leigh
Naughty or Nice by Harmon, Kari Lee
Diamond Spur by Diana Palmer
Our partner