Read The Judgment of Paris Online

The Judgment of Paris 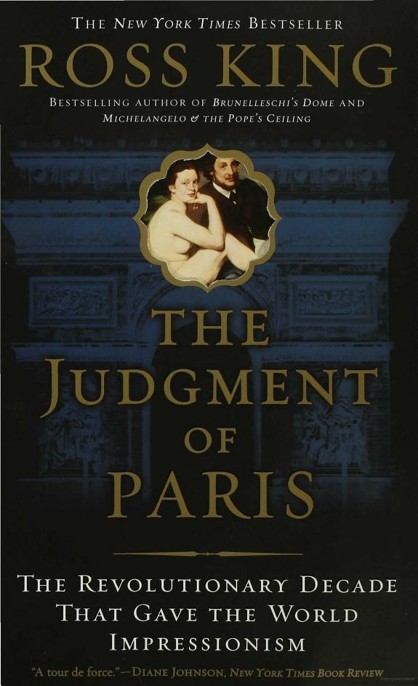 The
JUDGMENT
of
PARIS

The Revolutionary Decade
That Gave the World Impressionism

All rights reserved. No part of this book may be used or reproduced in any manner whatsoever without written permission from the publisher except in the case of brief quotations embodied in critical articles or reviews. For information address Walker & Company, 104 Fifth Avenue, New York, New York 10011.

Distributed to the trade by Holtzbrinck Publishers

All papers used by Walker & Company are natural, recyclable products made from wood grown in well-managed forests. The manufacturing processes conform to the environmental regulations of the country of origin.

The judgment of Paris : the revolutionary decade that gave the world Impressionism / by Ross King.

First published in 2006 by Walker & Company

This paperback edition published in 2007

Printed in the United States of America by Quebecor World Fairfield

"King has made a career of elucidating crucial episodes in the history of art and architecture
(Brunelleschi's Dome, Michelangelo and the Pope's Ceiling).
This time he's at play in the fields of French art and society from 1863 to 1874, years when France preferred academic painters, with their lusty goddesses and uplifting battle scenes. But what France preferred was under challenge by a rising (and sometimes backbiting) new group of artists. At the same time, the vainglorious Emperor Louis-Napoléon was stumbling into the calamities of war and revolution. Eventually art would imitate life; all the old orders would come crashing down; and Manet, Monet and Cézanne would emerge from the wreckage. King's account of that all-important crack-up is full of smart pleasures."

"King's meticulously researched history of this epic art movement . . . focuses on the engrossing story of two vital but opposing forebears: Ernest Meissonier, the most famous painter of the mid-19th century, celebrated for his exacting devotion to a pictorial reportage style of mostly Napoleonic war scenes, and Édouard Manet, constantly derided for his impulsively vigorous brushwork and lascivious subject matter. Manet lost many a battle in his time (he challenged one critic to a duel), but painted his way out of a stagnant academic style and won the war for art's future. 'A'"

"[The Judgment of Paris]
has the stylistic grace, the abundance of entertaining anecdotes and the shrewd marshaling of facts that made King's
Brunelleschi's Dome
a best-seller and his
Michelangelo and the Pope s Ceiling
a National Book Critics Circle award finalist . . . If this lively book sparks a Meissonier revival, it won't be a surprise." —Charles Matthews,
San Francisco Chronicle

"King writes in an engrossing style. His research is fastidious, and he leaves readers with a detailed picture of how the politics of art and the art of politics intertwine."

"The painters themselves might admire King's skill in using this backdrop to highlight the artists in the foreground.
[The Judgment of Paris]
offers a clear sense of how the politics and personalities of late 19th-century Europe fused to push art in a new direction."

"An engrossing account of the years from 1863—when paintings denied entry into the French Academy's yearly Salon were shown at the Salon des Refusés—to 1874, the date of the first Impressionist exhibition. To dramatize the conflict between academicians and innovators during these years, [King] follows the careers of two formidable, and very different, artists: Jean-Louis-Ernest Meissonier, a conservative painter celebrated for detailed historical subjects, and Édouard Manet, whose painting
Le dejeuner sur I'herbe
caused an uproar at the Salon des Refusés. Many other artists of the day, among them Courbet, Degas, Morisot, Monet and Cézanne, are included in King's compelling narrative, and the story is further enhanced by the author's vivid portrayal of artistic life in Paris during a turbulent era that saw the siege of the city by the Prussians and the fall of Napoléon III."

"A fluid, engaging account of how the conflicting careers of two French painters—the popular establishment favorite Jean-Louis-Ernest Meissonier and the oft-reviled newcomer Édouard Manet—reveal the slow emergence of Impressionism and its new view of painting and the world. King has crafted an exciting chronicle about political and cultural change . . . Many great characters in cultural history appear—Baudelaire, Zola, Henry James—not to mention the painters whose names are now Olympian. Delacroix, Monet, Cézanne, Rossetti, Renoir—they all strut a bit on King's stage, as do political figures, most notably Napoléon III. The author does not neglect the military history of the period, [but he] illustrates that the clash of ideas is even more exciting than the clang of swords."

"Best-selling author King
{Brunelleschi's Dome)
does not disappoint with this fast-paced romp through the Parisian art scene between 1863 (the first Salon des Refusés exhibition) and 1874 (the first Impressionist exhibition). King diligently assembles a swath of anecdotes and evidence, coaxing lively color and fascinating detail from even the most stolid of historical facts and documents. The book serves as an entertaining if broad account of a revolutionary transformation in vision—not least of all through art. Recommended."

"King is a master at linking pivotal moments in art history to epic rivalries. In his third supremely engaging and illuminating inquiry, King summons forth mid-nineteenth-century Paris and vividly portrays two diametrically opposed artists . . . Writing with zest and a remarkable command of diverse and fascinating facts, and offering keen insights into the matrix of art, politics, social mores, and technology, King charts the coalescence of a movement that not only changed painting for all time but also our way of seeing the world. And perhaps most laudably, he resurrects a discredited and forgotten figure, the marvelous monomaniac [Ernest] Meissonier, a man King has bemused affection and respect for, and an artist readers will be delighted to learn about."

For my three sisters

In this bitch of a life, one can never be too well armed.

Chapter Three: The Lure of Perfection

Chapter Eight: The Salon of Venus

Chapter Nine: The Tempest of Fools

Chapter Sixteen: The Apostle of Ugliness

Chapter Eighteen: The Jury of Assassins

Chapter Twenty: A Flash of Swords

Chapter Twenty-two: Funeral for a Friend

Chapter Twenty-four: A Salon of Newcomers

Chapter Twenty-eight: The Wild Boar of the Batignolles

Chapter Thirty-two: A Carnival of Blood

Chapter Thirty-four: The Apples of Discord

Chapter Thirty-five: A Ring of Gold

Chapter Thirty-eight: The Liberation of Paris

The Judgment of Paris
(Marcantonio Raimondi after Raphael)

Study for (Manet)
Music in the Tuileries

Lithograph of The Races at Longchamp (Manet)

Beggar in a Cloak
(Manet)

The Universal Exposition of 1867

Lithograph of The Execution of Maximilian (Manet)

Study of horses in motion (Meissonier)

Rue Castiglione during the siege of Paris, 1871

Statue of Napoléon from the Vendôme Column

The Hôtel de Ville, burned during the Commune

The Monet Family in Their Garden at Argenteuil
(Manet)

2A. (Ernest Meissonier)
The Emperor Napoléon III at the Battle of Solferino

2B. (Ernest Meissonier)
The Campaign of France

3A. (Édouard Manet)
Music in the Tuileries

3B. (Gustave Courbet)
A Burial at Ornans