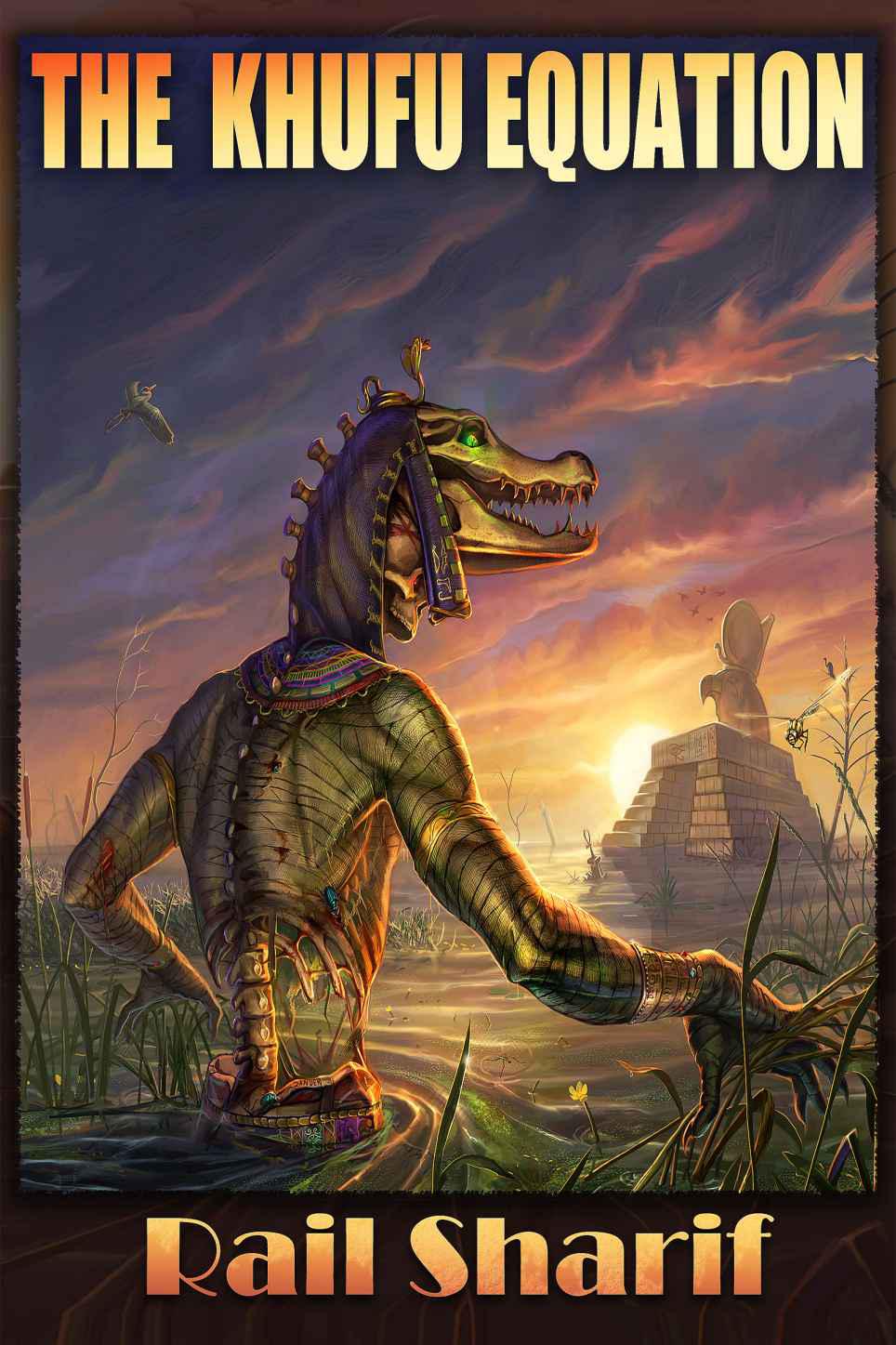 This ebook is licensed for your personal enjoyment only. This ebook may not be re-sold or given away to other people. If you would like to share this book with another person, please purchase an additional copy for each person you share it with.

The events described in this book are all fiction. Names mentioned in it are the fruit of the author's imagination. All coincidence to real geographical names and personal names (nowadays living or deceased) are simply casual.

To my dear and mother…

A low, dusty breeze blew across the desert floor as the archeologist Michel Arno, huddled in his duster amid the cold, turned toward the darkness that receded from the first rays of dawn. He set his gaze upon the horizon, trying to discern the pyramid against it, and perhaps the glow of projector lamps aimed upward from its base. He turned again and stared into the sky. Now his sight was directed to the point of the sunrise. There was no time to spare, so with the approach of daylight he quickened his steps.

Exactly twelve thousand from the main entrance of the pyramid, he repeated, almost in a meditative state, as he counted each movement forward. Eleven thousand nine hundred and fifty-two . . . fifty-three . . . fifty-four. The count was neither meters nor feet but just steps, without turning to the left or the right even so much as a jot. Fifty-nine. Dreams can be strange, sometimes. Does one really need them? Why must he count anything at all in this place, where time seems to move backward and forward simultaneously?

He quickened his pace a little, using the padded collar of his chamois jacket as a shield against the desert cold. He must not be late for the rise of Sirius. Eleven thousand nine hundred and seventy-three . . . seventy-four . . . seventy-five. Michel stopped suddenly for a moment as a jolt of pain shot past his heart.

"It is unthinkable to involve oneself in such situations at my age," he complained. "Just a little. What will be the expression on my face when I understand that it was only sleep, nothing more? Am I really such an idiot?"

He jammed his hands into his pockets, located the packet of heart pills and hurriedly placed one under his tongue.

"Keep going, old man!" It was an urgency with which he had kicked himself forward all these years, forever scratching away at the vacancy of the past, like a solitary beetle pushing sand aside in the wind.

It was simply too easy to lose one's way, so from time to time he checked himself on the compass. There was the slow but constant advance of a filmy sensation, as if he was gradually becoming part of the mystery he pursued. Even as he grew older, second by second, he likened himself to an aged bottle of wine that history would one day uncork and savor. The suspense of it made him feel strangely vibrant, like a boy on the verge of his prime.

Michel stopped right there. Just a final step remained, whereupon all the secrets of the universe would be opened and released upon the earthly plain. Could it be, or was he merely a foolish man at the precipice of reason?

He jerked his head upward and caught sight of the sun as it rose above the horizon. The first rays began to push the darkness back into the depths of desert. Left of the sun there was Sirius, a majestic symbol to the Egyptians. "Twelve thousand," Arno pronounced to himself. At last he had reached the last step. He could recite the lines in his sleep.

"Twelve thousand steps from the main temple entrance. Sirius will shine and mix its light with the rays of Ra. Wait."

Arno waited patiently, like an archeologist would, but nothing happened. The only witness to his confusion was the breeze, which whirled around him like a poltergeist. Having brought a million grains of sand into the air, it played with the eryngium as if it were a milky puppet.

The old man looked around, hoping to see at least a sign. Why was he in such a desolate place? What was he seeking? He bent on one knee and took up a handful of sand, but the sand, like time, vanished from between his fingers.

"You fool," he said to himself, as he turned to leave, but suddenly the ground beneath him began to vibrate. It was sinking, or he was.

Michel sensed that he was being carried down somewhere, and very quickly. It was difficult to breathe due to the constant rush of dust. He landed with a merciless thud on something hard, and lay there on his side, coughing. Myriad grains of sand falling from above, cut through with light, gave the assurance that he was alive.

Michel struggled to his feet, tasted the blood that oozed from his lip, and stared into the murk of his surroundings. The place was very dark, and considerable time passed before he could distinct any details. The walls of a small apartment were decorated with reliefs and frescoes depicting scenes of everyday life. The sun outside was now high enough to cast a bit of light into the location. A sudden shot of rays from Sirius beamed through the foggy dust, blending with the sunlight. Thus Michel Arno saw what he couldn't have noticed before. At the end of the room, on a little pedestal, were two strange objects. With the care of an archeologist, he took them in his hands. What first caught his interest was the object with the thin, serpentine hieroglyphics. The more attentively he read them, the clearer was his realization. Sparks of terror fired in his eyes. He had a desire to look thoroughly upon the other object, but he was short of time.

He looked up. It didn't matter how he would get out of that place, but he would do so at any cost. He had to pass the two objects to the person for whom they were destined, as pronounced by the mission itself. He had to do so as quickly as possible.

"As the Holy Scriptures say, there is a time to throw stones away and a time to bring stones together . . . and this time has come."

Jeanette was sorry she hadn't been firm enough as to her husband. Two weeks before, the river of time had dumped his lifeless body out of its stormy current. Looking sorrowfully at the monitor, Jeanette's thoughts carried her carried back to their cozy nest of former times, an ordinary two-story house on Francis Rachel Street.

. . . Leaning against the rail of the garret, Andrew tenderly hugged her shoulders. Seeing the ocean reflected in her eyes.

"Little mouse," he said. "Perhaps I'll leave you for a week or two. If I don't return, carry this envelope to the police station." He held out a sealed yellow envelope. She took it and, with a look of concern, pressed it to her chest.

"Andrew, what have you thought of again? What do you mean by saying "if I don't return"? Think of our baby. It's already three months along, and it feels everything. Please stay, I beg you. This game you play will end badly.

"Jeanette. . . ." Andrew wanted to say more, but amid the tension he fell silent.

I implore you, Andrew. Sooner or later, you'll be caught. And I will not touch your money. Know that." Andrew, feeling eager to depart, embraced his wife. He lowered his head to hers and, tracing his cheek along the silken surface of her face, he whispered.

"My little mouse, for a month I won't be busy with that. And this time I'm leaving for a different reason." He paused in concentration, seeking the right words for what he wanted to say. "I've found something about what I can't even speak aloud."

Jeanette wept as she clutched the yellow envelope.

"But, why you? What is in this envelope?"

He didn't answer but knelt down and pressed himself against her belly.

Jeanette would forever remember that last kiss and the smell of tobacco that stained her ruby lips. It was only two weeks later that Andrew returned. He had come home in a heavy, reddish-brown coffin; a terrible load conveyed to Jeanette by a strange person she had never seen before. In less than a minute she had memorized his Asian features. It took him the same amount of time to express condolences and inform Jeanette that Andrew had caught a tropical sickness. Where it was and what the circumstances were, Jeanette was not able to ask. The shock was too strong, and the stranger was obviously not in a hurry to discuss the matter. He left the coffin at the house, climbed into a cab and disappeared.

All that could certain was that the history of Andrew's death was written on the water with a pitchfork. Moreover, the pathologist's conclusion regarding a brain hemorrhage reaffirmed it: Andrew died not himself.

Tears? Handkerchiefs and pillows were soaked through. However, she remembered the baby growing in her womb. He was nearly four months along, and his father had passed away under strange circumstances. This child was the only thing Andrew had left to her. But Jeanette was strong-willed. After a week, followed by the funeral service, she told herself:

"That will do. Otherwise, I'll just make my baby nervous."

She and Andrew were the same age: twenty-five. She worked as a commercial manager in a small bank, where she had an office of her own. She was proud of that. He worked nowhere and was a person into whose hands money floated, forever escaping taxes. He had never disclosed to Jeanette any of his professional secrets. He was always surrounded by men of dubious character, and consequently Jeanette worried about him. She begged Andrew to busy himself with a worthwhile job. There was no need to expose her to risk and the loss of her good reputation, but being stubborn as a mule he continued in his way. Now he was dead and buried, six feet down in a humble grave.

Jeanette's fingers in usual rhythm glided over the keys of the computer, stopped, and rushed again into their undulant dance. Attentively she followed the running lines, checked the information, divided it into files, and again threw her slender fingers upon the keys.

She was interested in her work, but in her mind was the constant image of that sealed yellow envelope. Three weeks after the fact, it continued to haunt her. She had taken such pains not to fulfill her husband's wish, but the envelope remained nearby, in her office safe. Sometimes she felt compelled to take it to the police station. She'd take it out of the safe then, but each time some feeling, impossible to explain, led her to place it back in hiding.

Only Beloved by Mary Balogh
Night at the Fiestas: Stories by Kirstin Valdez Quade
Brides and Betrayal (Reconciled and Redeemed Book 1) by Brown, Michelle Lynn
The Time Trap by Henry Kuttner
Freefall by Joann Ross
The Echo by James Smythe
A Little Surprise for the Boss (Mills & Boon Desire) by Elizabeth Lane
Backwards Moon by Mary Losure
Entangled by Amy Rose Capetta
Entangled: Sequel to Awakened by Roberts, Lacey
Our partner