Tags: #The Killing of Katie Steelstock

The Killing of Katie Steelstock 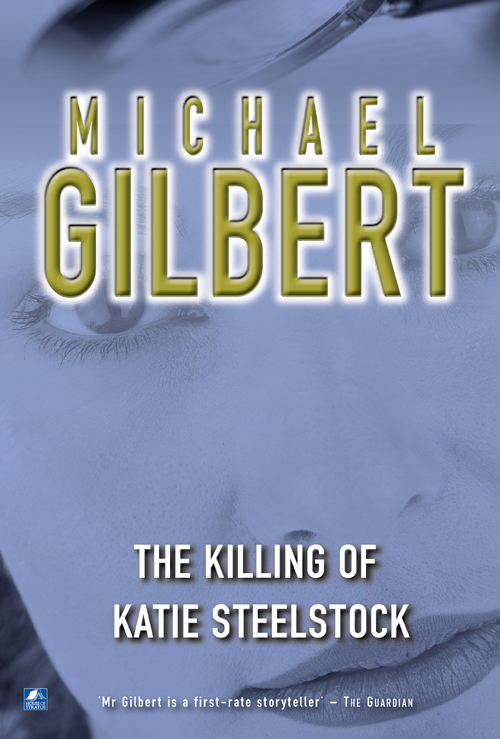 The Killing of Katie Steelstock

The right of Michael Gilbert to be identified as the author of this work has been asserted.

This edition published in 2012 by House of Stratus, an imprint of

Born in Lincolnshire, England, Michael Francis Gilbert graduated in law from the University of London in 1937, shortly after which he first spent some time teaching at a prep-school which was followed by six years serving with the Royal Horse Artillery. During World War II he was captured following service in North Africa and Italy, and his prisoner-of-war experiences later leading to the writing of the acclaimed novel
‘Death in Captivity’
in 1952.

After the war, Gilbert worked as a solicitor in London, but his writing continued throughout his legal career and in addition to novels he wrote stage plays and scripts for radio and television. He is, however, best remembered for his novels, which have been described as witty and meticulously-plotted espionage and police procedural thrillers, but which exemplify realism.

HRF Keating stated that
‘Smallbone Deceased’
was amongst the 100 best crime and mystery books ever published.
"The plot,"
wrote Keating, "
is in every way as good as those of Agatha Christie at her best: as neatly dovetailed, as inherently complex yet retaining a decent credibility, and as full of cunningly-suggested red herrings."
It featured Chief Inspector Hazlerigg, who went on to appear in later novels and short stories, and another series was built around Patrick Petrella, a London based police constable (later promoted) who was fluent in four languages and had a love for both poetry and fine wine. Other memorable characters around which Gilbert built stories included Calder and Behrens. They are elderly but quite amiable agents, who are nonetheless ruthless and prepared to take on tasks too much at the dirty end of the business for their younger colleagues. They are brought out of retirement periodically upon receiving a bank statement containing a code.

Much of Michael Gilbert’s writing was done on the train as he travelled from home to his office in London:
"I always take a latish train to work," he explained in 1980, "and, of course, I go first class. I have no trouble in writing because I prepare a thorough synopsis beforehand.".
After retirement from the law, however, he nevertheless continued and also reviewed for
‘The Daily Telegraph’
, as well as editing
‘The Oxford Book of Legal Anecdotes’
.

Gilbert was appointed CBE in 1980. Generally regarded as ‘one of the elder statesmen of the British crime writing fraternity, he was a founder-member of the British Crime Writers’ Association and in 1988 he was named a Grand Master by the Mystery Writers of America, before receiving the Lifetime ‘Anthony’ Achievement award at the 1990 Boucheron in London.

Michael Gilbert died in 2006, aged ninety three, and was survived by his wife and their two sons and five daughters.

“German,” said Jonathan, “is the most natural singing language in the world. Look at that last word. Tochterlein. You can really get your tongue round Tochterlein.”

“What does it mean, anyway?” said Sim Havelock.

The trebles thought this was funny.

“You mustn’t laugh when you sing it at the concert,” said Jonathan. “It’s a very sad song. It’s about three students who crossed the Rhine to visit this inn. They were all in love with the landlady’s little daughter.”

“That’s right. Only when they got there she was lying dead in her bed.”

“That’s balmy,” said Sim. “You couldn’t be in love with a dead girl. What would be the point of it?”

Tim Nurse said, “It sounds a bit soppy to me. One thing, if it’s in German no one’s going to know what it means. It’s quite a decent tune.”

“It’s gone seven,” said Jonathan. “You’d better all be pushing off or you’ll be late for your suppers.”

The boys, who varied in age from Terry Gonville, nearly fourteen, to Sim Havelock, just gone nine, were disposed around Jonathan’s music-cum-writing room. The windows were wide open to a late-August evening of blistering heat. They seemed disinclined to stir. Roney Havelock, who was only eleven but took the lead in most things, said, “Do us the ‘Walloping Window Blind,’ Jonathan. There’s time for that. Just one verse. We’ll sing the chorus for you.”

Jonathan sighed. Then he plucked a single note from his nickel-plated guitar, a note so deep that it might have come from a bass cello. In repose his face was unattractive. (“Mean eyes, a sour mouth and an obstinate chin,” Sally Nurse had said, “yet a lot of people like him.” “And a lot of people don’t,” her father had said.) When he sang he became a different person. He became part of the song, serious or humorous, bold or sentimental. A television cameraman who knew his job would have tracked extra close, to catch every tiny detail in a dead face which came to life in such a startling way.

“A capital ship for an ocean trip

Was the Walloping Window Blind

No wind that blew dismayed her crew

Or troubled the Captain’s mind.

The man at the wheel was made to feel

Contempt for the winds that blow,

Though it often appeared, when the gale had cleared,

That he’d been in his bunk below.”

The guitar quickened to a livelier tempo. The treble voices shrilled in unison.

A roving we will go—oh.

So let the music play—ay.

We’ll sail to our love in a boxing glove,

Jonathan produced a final arpeggio on the guitar and Roney said, “Go on. Go on. Next verse. The one about the bosun’s mate who was very sedate, yet fond of amusement too—oo.”

A head poked through the open window and Tony Windle said, “You having trouble with your choir, Johnno?”

“It’s a mutiny,” said Jonathan. “But I’m not going to yield to force. Come in and help me disperse the mob.”

Tony climbed through the window, picked up Sim Havelock and deposited him squealing onto the front path. Jonathan was putting away his guitar. He said, “Urchins, the jam session’s over. If you behave yourselves you can come again next Friday.”

The boys began to disperse reluctantly. Roney was the last to go. He said, “You wouldn’t get very far really. Not if you tried to sail in a boxing glove.”

“Perhaps it was a boat called the
Boxing Glove.”

Roney considered the point. He said, “Well, that’s one solution I hadn’t thought of,” and sprinted off after the other boys, who were walking arm in arm down the middle of Belsize Road chanting, “Then blow, ye winds—heigh-ho, ye winds, a roving we will go—oh.”

“Roving is something I shan’t be doing, not for a day or two,” said Tony. “That rancid jackanapes raided
my
car last night.”

“He took away the distributor head.”

“Do you think it was boys? They seemed such kids’ tricks. Letting down George Mariner’s tires and emptying all the water out of old Vigors’ radiator.”

“You can blow tyres up again and refill a radiator,” said Tony gloomily. “I shall have to buy a new distributor head, and the car’ll be out of action for days. That’s what I came about. I promised to drive Katie to this hop.”

“Certainly. But she’s a lazy little slut and always prefers to come in mine. Can I use your blower?”

But the telephone produced no answer.

“Hold it. I’ve got a better plan.” Tony climbed back out of the window and held up his hand to stop a young man who was coming up the road on a moped.

He said, “Hold your horses, Sergeant. I’ve got an official complaint to make. Come in.”

Detective Sergeant Ian McCourt, who was young, Scottish and helpful, dismounted and followed him in.

“I’d like to hear about that. When did it happen?”

Sink: Old Man's Tale by Perrin Briar
Her Millionaire Master by Maria Monroe
The Girl With the Long Green Heart by Block, Lawrence
The King's Dogge by Nigel Green
Voices by Ursula K. le Guin
The Marshal's Own Case by Magdalen Nabb
The Shadow of the Wind by Carlos Ruiz Zafon
El discípulo de la Fuerza Oscura by Kevin J. Anderson
BWWM Interracial Romance 6: Her Protector by Elena Brown
When The Light Goes Out by Thompson, Jack
Our partner