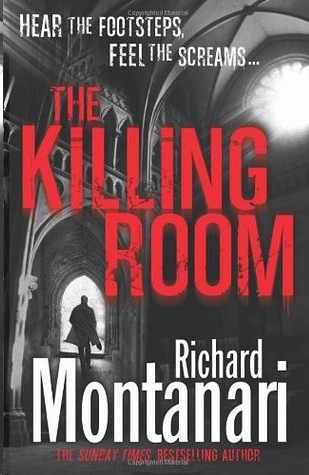 Richard Montanari was born in Cleveland, Ohio, to a traditional Italian-American family. After university, he travelled extensively in Europe and lived in London, selling clothing in Chelsea and foreign language encyclopedias door-to-door in Hampstead Heath.

Returning to the US, he started working as a freelance writer for the
Chicago Tribune
, the
Detroit Free Press
, the
Seattle Times
, and many others. He wrote his first book,
Deviant Way
, in 1996 and it won the OLMA for Best First Mystery. His novels have now been published in more than twenty-five languages.

One The Children of Disobedience

A hard heart shall fear evil at the last:
and he that loveth danger shall perish in it.

THE CHILDREN OF DISOBEDIENCE

And the smoke of the incense
,
which came with the prayers of the saints
,
ascended up before God out of the angel’s hand.

When she was a young girl, before the night embraced her with its great black wings, and blood became her sacramental wine, she was, in every way, a child of light. To those who knew her in those years she seemed a studious girl, quiet and polite, given to watching clouds for hours on end, oblivious, as only the very young can be, to the crushing poverty that surrounded her, the chains that had enslaved her kind for five generations.

She was six years old before she wore a pair of shoes she did not share. She was eight before she buttoned a dress someone had not stained before her.

For the longest time she lived inside the high stone walls of her mind, a place where there were no shadows, no demons.

In her thirteenth year, on a night when the candles fell cold and the moon was not to be found, she met the darkness for the first time. Not the darkness that follows day, descending upon the earth in a deep violet blush, but rather that which dwells within men, men who travel the hardpan roads, gathering to them the mad, the fallen, the corrupt of heart, their deeds the silt of backwater lore. On that night a seed was sown in her body, her spirit.

Now, these many years later, in this place of misery and wretchedness, in this house of seven churches, she knows she belongs.

There are no angels here.

The devil walks these streets. She knows him well – his face, his touch, his scent – because in her thirteenth year, when God turned his head, it was to the devil she was given.

She had watched the young man for more than a week, having first spotted him on Market Street near the Eleventh Street station, a gaunt figure etched on a granite wall. He was not an aggressive panhandler – indeed, his nearly skeletal body and spectral presence would not have presented much of a threat to anyone – but was instead a man reduced to mumbling incoherently to passersby, commuters rushing to and from the station. Twice he had been moved along by police officers, offering no resistance or response. His spirit, it seemed, had long ago been purloined by his addictions, the siren call of the streets.

On most nights, after the evening rush hour, he would walk Market Street toward the Delaware River, toward Old City, stopping those who looked like an easy mark, cadging the occasional handful of coins, grubbing the infrequent cigarette.

She always followed him at a safe distance. Like most of his breed he went unnoticed, except to those like him, or those who would use him. On those rare occasions when he found a homeless shelter with room, he would stay the night, but would always take up position outside the Eleventh Street station by 6:30 a.m., beginning his cycle of despair and degradation all over again.

Once she followed him into a convenience store on Third Street, and watched as he pocketed high-sugar foods – honey buns, Ding
Dongs, TastyKakes – all with one yellowed eye on the convex mirrors at the end of the aisle. She watched him wolf down the food in a nearby alley, only to throw it all up moments later.

On this day, when temperatures are predicted to drop below zero, she knows it is time.

Bundled in four thin sweaters and a pea coat ripped at both shoulder seams, the young man stands shivering in a doorway on Eighth Street near Walnut.

She approaches him, stopping a few feet away, still mostly in shadow. He looks up. In his watery eyes she sees herself, and knows the spirit is stirring.

It is as if she can hear the bones clattering in his chest.

He is in his twenties, but the skin around his eyes is purplish and sallow, the stubble on his face already gray. His hair is greasy beneath his watch cap. His fingernails are bitten raw. Blisters bubble on the back of his hands.

She remains in shadow, holds out a gloved hand. At first the young man is skeptical, but when she steps into the light, and he sees her eyes for the first time, he knows. He takes her hand as a hungry man would accept a crust of bread.

‘Do you remember your promise?’ she asks.

He hesitates before answering. They always do. In this moment she can all but hear the wheels turning, the fevered reasoning in his mind. In the end they remember, because this is the one vow they all know will one day be recalled. A single tear rivers down his scalded cheek.

She glances down, notices a dark stain blossoming on the front of his trousers. He is wetting himself. She has seen this before, too. The release.

The young man steps forward on unsteady legs. She helps him. He seems to possess no weight at all, as if he were sculpted of steam.

At the mouth of the alley she stops, turns the young man to face her fully. ‘He will need to hear your words. Your
exact
words.’

His lips begin to tremble. ‘Can’t I tell just you instead?’

The young man wipes his eyes with the back of his hand. ‘Then he is real after all.’

‘Oh, my, yes.’ She points to the dark niche at the end of the alley. ‘Would you meet him now?’

The young man shakes his head. ‘No. I’m afraid.’

She meets his gaze in silence. A few moments pass.

He takes a deep breath, exhales. His breath is warm and vaporous and sour. ‘What do I call you?’

There are many answers to this. At one time she would have been called Magdalene. At another, Babylon. At one time, indeed, Legion.

Instead of answering the question she takes his arm. She thinks about the approaching days, the end days, and what they are about to do. Ephesus, Smyrna, Pergamos. There is an order to it all. If there was no order she would surely go mad, and then she would live among the low people: the wicked, the dispossessed, the forsaken.

They dissolve into the city, followed by a long and solitary shadow. Around them the winter winds swirl, but she no longer feels the cold.

Detective Kevin Francis Byrne had seen it many times before – the blank stare, the knotted shoulders, the hands loosely held, ready to become fists at the slightest provocation. The tension, Byrne knew, was institutional, a twisted wire in the middle of the back that never uncoiled, never relented. Sadness haunted the eyes. Fear was carried on the shoulders.

For this kid, and the millions like him, there were enemies around every corner, dangers in every noise, whispers in the night that said:

What’s mine is mine, what’s
yours
is mine
–
you just don’t know it yet
.

The boy was eleven, but his eyes were an old man’s eyes. He wore a dark blue hoodie, frayed at the cuffs, low-slung jeans, at least two fads out of date. His rust-colored Timberlands were scuffed and rutted, too large for his feet. Byrne noticed that the boots were tied with different type laces; rawhide on
one boot, nylon on the other. He wondered if this was a fashion statement, or done out of necessity. The kid leaned against the dirty redbrick wall, waiting, watching, another ghost haunting the city of Philadelphia.

As Byrne crossed Twelfth Street, bunching his collar to the raw February wind, he considered what he was about to do. He had recently signed up for a mentoring program called Philly Brothers, a group loosely patterned on Big Brothers Big Sisters. This was his first meeting with the boy.

In his time on the force Kevin Byrne had taken down some of the darkest souls ever to walk the streets of his city, but this encounter scared the hell out of him. And he knew why. This was more than just a man reaching out to an at-risk kid. Much more.

‘Are you Gabriel?’ Byrne asked. He had a picture of the boy in his jacket pocket, a school photo from two years earlier. He decided not to take it out. If he did it would probably only embarrass the kid.

As he got closer Byrne noticed that whatever tension was in the boy’s shoulders ratcheted up a notch. The kid raised his eyes, but did not look into Byrne’s eyes. He aimed his gaze, instead, to a place somewhere in the middle of Byrne’s forehead. It was an old salesman’s trick, and Byrne wondered where this kid had picked it up, or if he even knew he was doing it.

‘They call me G-Flash,’ the boy said softly, shifting his weight from one foot to the other, saying this as if it were common knowledge.

‘
Brother
,’ the kid said with a scowl. He put his hands into the pockets of the hoodie, probably to ward off any kind of handshake. Byrne found his own hand suspended in space, halfway between himself and the kid, and suddenly didn’t know what to do with it.

No Magic Moment (Secrets of Stone Book 4) by Angel Payne, Victoria Blue
Melforger (The Melforger Chronicles) by Lundgren, David
Gracie's Touch Zion Warriors 1 by S E Smith
Let Me Tell You Something by Caroline Manzo
Devilishly Sexy by Kathy Love
House of Glass by Jen Christie
Bake Me a Murder by Carole Fowkes
Tempting the Heiress by Barbara Pierce
Underwood by Colin Griffiths
Capitol Murder by Phillip Margolin
Our partner