The Killings of Stanley Ketchel 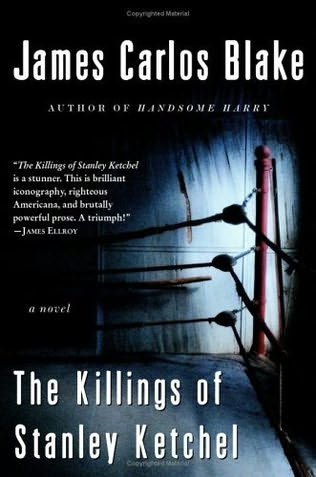 FOR
the Sisters of the Holy Ghost
at the old Saint Joseph’s Academy
in Brownsville, Texas,
who taught me the language.

And the wild regrets, and the bloody sweats,

None knew so well as I:

For he who lives more lives than one

More deaths than one must die.

I can entertain the proposition that life is a metaphor for boxing—for one of those bouts that go on and on, round following round, jabs, missed punches, clinches, nothing determined, again the bell and again and you and your opponent so evenly matched it’s impossible not to see that your opponent
is
you….

The Richest Hill on Earth

A Season of Wrathful Sorrow

Under the Bear Flag

A Reckoning in Reno

Other Books by James Carlos Blake

K
etchel’s manager, Willus Britt, lays it out plain and simple. “We put in the contract that if there’s no knockout the fight’s a draw. All Stevie and Jack have to do is make it look good from start to finish. The white hope middleweight against the Negro heavyweight. Like David and Goliath, only better. And only it’s a draw. I’m telling you, the whole country’ll go crazy. They’ll be screaming for a rematch. And that’s when we make a
real
killing.”

Across the table, George Little, who manages Johnson, smiles and nods.

It is late summer of 1909. They are in a secluded booth next to a window in a San Francisco hilltop restaurant. The fog banking in from the bay is blue in the city’s early evening light. Even from this
vantage it is difficult to believe that a little more than three years ago the town had been charred rubble.

“Not that we won’t do plenty good on this one,” Britt says. “Hell, we’ll pack Sunny Jim’s to the top rows.
Plus,
the odds’ll be so heavy on Jack, we’ll rake in even more with side bets on the draw.”

“We’d have to spread them bets around so’s not to raise suspicion,” George Little says.

It’s the remark of a man who’s decided he’s in, and Britt smiles. “Naturally. We’ll use fronts to lay the bets.”

Britt leans farther over the table toward him. “Christ almighty, man, they’ll pour in for the rematch like the Johnstown flood. We’ll charge even more for tickets and
still
need a place double the size of Sunny Jim’s to hold them all. I’m telling you, we’ll need a goddamn freight train to carry off the gate money.”

He sits back and fingers his red bow tie to ensure its proper lay. A spare man whose perpetual half-smile and sleepy aspect can fool people into thinking he lacks astuteness.

Beside him Jack Johnson grins. His gold teeth gleam in the lamp glow and his shaven head shines like polished ebony. Arthur John Johnson is thirty-one years old and the heavyweight boxing champion of the world. At 210 pounds and just shy of six feet two, he is by far the largest man at the table. The stickpin of his cravat is also of gold, the fob chain looping from his vest pocket, the head of his walking stick. He wears a diamond on his pinky. His suit is custom-tailored. His shoes are of crocodile hide.

Sitting next to Britt, Ketchel smiles too, and thinks how grand it would feel to knock out those gold teeth.

On Johnson’s other side is a slender strawberry blonde with cool green eyes, her cheeks and nose powdered with freckles fine as cinnamon. She’d been introduced as Sheila. Although Ketchel is appalled that a white woman would keep company with a Negro, especially a woman as pretty as this one, and especially in public, he affects indifference. Yet he is intensely aware of her, of the push of her breasts against her shirtwaist. He would bet they were freckled too.

Johnson catches Ketchel’s appraising glance at her. “She a pulchritudious eyeful, ain’t she, Mr. Stanley? Lady from Australia. Say something in Australian for the man, honey.” He has a fondness for polysyllabic words, especially of his own concoction, and is prone to the malaprop.

“We speak English in Australia, Jack, as you bloody well know.”

She rolls her eyes and looks out the window at the encroaching fog. Johnson puts his hand under the table and she smiles and gives him a sidelong glance.

“What say we stick to business, Jack?” George Little says. He is clearly uncomfortable with the woman’s presence, has repeatedly admonished Johnson to be more discreet about the white ones.

Ketchel smiles to mask his indignation. The dinge pawing her in a public place with three white men looking on and the bitch barely shows a blush.

Everybody knows what his answer will be. His share of the purse when he won the title was a pittance, and he hasn’t been able to get a big-money fight in the ten months since. He needs the cash. He’s
a high-roller. He likes the night life, flashy clothes, the horses, the dice. Bold white women. A fight with Ketchel means a payday too big to turn down.

“I say fine,” Johnson says. “Make me feel kinda lowdown to mix it up with a little fella, even if it ain’t for real, but sometimes you got to take what you can get.”

“Gosh, Jack, that’s sad,” Ketchel says. He’ll be damned if he’ll let the coon nettle him with that “little fella” crack. He is the world middleweight champ, and at five feet nine inches and 160 pounds is larger than the average man of his day. In more than fifty official fights he has knocked out nearly all of his opponents, more than a dozen of whom outweighed him by at least twenty pounds.

“Then again, everybody say you the little man with the big punch,” Johnson says. “Middleweight who hits like a heavy, I hear tell.”

“I hear tell you got a pretty good punch yourself, Jack.”

“What you gonna scale for me, Mr. Stanley, one sixty-five, one-seventy?”

“Tommy Burns was one-seventy and I got to tell you, I been hit harder by some women.”

The redhead snickers. Johnson winks at her.

Johnson laughs and slaps the table. “Ooo-
eee,
little man got him a counterpunch. You a mirthaful man, Mr. Stanley.”

“What’s it matter what he weighs?” Britt says. “It’s gonna be a draw.”

“We’ll worry about that when the time comes,” Britt says.

“
You’ll
worry about it,” George Little says. “Not me. Not Jack. Won’t play out like no David and Goliath.”

“The thing is,” Johnson says to Ketchel, “Tommy Burns had no business being heavyweight champeen. He hardly bigger than you. He no more a heavyweight than I’m the pope a England.”

“Well now, you right about that,” Johnson says. “You beseeked
me.
I had to chase that man all over the world for two years before he quit the dodge.”

Ketchel knows all about it. Everybody does. Most white boxers of the time refused to fight Negroes on the widely understood ground that it was demeaning, but there had been growing suspicion that Tommy Burns’s true reason for avoiding the much larger Johnson was fear. An indignant Burns had finally said he’d stoop to defend his title against the so-called “Galveston Giant” anytime the dinge agreed to let him have 85 percent of the purse. He was stunned when Johnson accepted the terms.

They fought in Sydney, Australia, on the day after Christmas, and the outcome was apparent from the opening round. Both men had reputations for taunting their opponents during a match, but after the first minute or so of the fight Burns had little to say. Johnson talked constantly and made jokes and hit Burns at will, provoking the white crowd to a yowling frenzy. He’d tell Burns to watch out for the jab and then snap his head back with it. He’d warn him to guard his flanks and then stagger him into the ropes with a hook to the ribs. Johnson cakewalked to his corner at the end of every round. His cornermen implored him to quit the shuck before somebody shot him. He basked in the crowd’s execrations. He could have made shorter work of Burns but was enjoying himself too much. After each knockdown he’d lean on the
ropes like a loitering thug, laughing as Burns struggled to his feet and the throng urged him up, pleaded with him to kill the big nigger, kill him. So it went, Johnson larking and japing, humiliating Burns, ruining him by slow degree. By the fourteenth round Burns’s ears looked like small bunches of grapes and his eyes were swollen to slits. He was lurching almost blindly, clutching at Johnson like a drunken lover. At which point a squadron of police swarmed into the ring and put an end to the proceedings. Both parties had been warned during contract negotiations that the police would stop the fight the moment it seemed there might be serious injury to either boxer, and the fighters had agreed that in such an event the referee would decide the winner. The referee was Hugh McIntosh, promoter of the bout. It broke his heart to raise the Negro’s hand, but only with a baseball bat could Johnson have beaten Burns more obviously. The spectators grasped a straw of solace by telling each other that Tommy had by God been game to the end and at least not been knocked out.

Among the reporters present at that match was the celebrated author Jack London, who remonstrated in print with undefeated champ James Jeffries to come out of retirement “and remove the golden smile from Johnson’s face.” Now Jeffries is reported to be in serious training, laboriously shedding the excess weight he’s gained in more than five years since relinquishing the title. Newspapers across the republic hail him as the Great White Hope. Few whites would complain, however, if Stanley Ketchel should trump Jeffries and take Johnson down first. Indeed, Ketchel being the smaller man, his victory over the Negro would be all the sweeter.

“So we’re agreed,” Britt says. “The sixteenth of October at Sunny Jim Coffroth’s arena in Colma. Twenty rounds. We split the
gate down the middle and use fronts to lay our bets on the draw. Like the man said, boys, we’re going to do jim-dandy.”

“Then we sign for the rematch,” says George Little, “and we make a
real
killing.”

“No,
you
did,” George Little says. “We’ll need a damn freight train!”

They close the deal with handshakes all around. Ketchel’s grip feels to Johnson like a large rock, Johnson’s to Ketchel like something on a leash.

“Let’s us absquatulate on back to the hotel, my cherry amoor,” Johnson says to the redhead. “Papa Jack got him a bad itch needs scratching.”

She doesn’t blush at that, either. Ketchel wants to slap her.

With his derby cocked over one eye and his gold teeth glinting, the redhead on his arm and George Little trailing behind, Jack Johnson twirls his walking stick and makes his easy way to the front door, turning every head in the room as he goes.

Ketchel watches them leave. “I can take him, Willie.”

“Christ, kid, that’s what I been telling
you.
Come the rematch, you’ll prove it to the whole damn world.”

The Saints of the Cross by Michelle Figley
Amy Falls Down by Willett, Jincy
The Village Against the World by Dan Hancox
A Perfect Mess by Zoe Dawson
Things Invisible to See by Nancy Willard
Fourth Bear by Jasper Fforde
The Innocent: A Vanessa Michael Munroe Novel by Stevens, Taylor
Hidden Faults by Ann Somerville
TooHottoTouch by Samantha Cayto
The Rancher's One-Week Wife by Kathie DeNosky
Our partner