The Ladies of Garrison Gardens 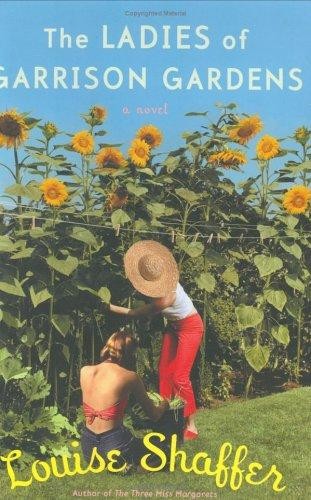 For Mama,
who taught me to have dreams,
and Roger,
who sees to it that they become a reality

This part of the gig is a joy that keeps on growing because the list of fabulous people in my life grows too. I'm not sure how I got so lucky, but I'm so grateful.

So thank you to and for Eric Simonoff who continues to be the kind of spectacular agent most of us only dream of finding, as well as a good and caring friend whose company I enjoy so much, and thank you to the amazing Lee Boudreaux who works her editorial miracles—I'll always be in her debt for what she's done for this book—while still being fun and funny and the world's best cheerleader.

Special thank you to Allison Dickens and Mary Siemsen for taking such good care of the Ladies.

Thank you to those who walked me through areas of expertise I lacked and made bygone eras and places come alive for me: the staff at East Fishkill Community Library, especially Carol Reader, Carol Roughgarden, Kristie Simco, and the wonderful Catherine Swierat. Thank you to Tom Tierney, Bernie and Celeste Rudberg, Jerry Foster, Ron Woodward, Sandra Okamoto, Marilyn Piccolo, Phyllis Piccolo, Steven Hudspeth, and to Betsy Gilbert who acted as a special consultant for the more colorful moments.

Thank you to Gerry who could have made a fortune for his dual gig as shrink and researcher, but he did it all because he's just that kind of person. Thank you to Cynthia who acted as a one-woman band, researched, listened by the hour, encouraged, shoved—oh so gently—and in her spare moments fired up her mighty computer to whip out the promotional stuff. I'm not sure I could have done it without you, Cynthia—I know I couldn't have done it on time.

Thank you to Cecile Barendsma who gives my characters the chance to be multilingual.

And thank you to those who just make everything better: Ellen, who is always there with advice, a sounding board, and breakfast, Nimet who has been there for so long I won't count if she won't, Charlie who makes it worthwhile to turn on the computer in the morning, my dear godmother, Aunt Virginia, my sisters Lucy and Marie, and my brother Brad, Bee and Iris, and, of course, Colin, the webmaster past compare, and Christopher.

S
OMETHING WAS UP.
From the hallway outside her bedroom she heard the words
Old Missus
murmured—or possibly they were shouted; her ears were sharp for a ninety-year-old, but even she couldn't hear through thick pine doors the way she used to. For a moment she contemplated protesting. Essie, who had been her housekeeper, cook, and general factotum—for, was it twelve years now?—knew that using the hated
Old Missus
title was a call to arms, even if the sweet young thing Essie had just hired did not. Sharp words were called for. But it would take energy to deliver them. And one had to be careful how one spent that precious commodity at her age. Besides, she wasn't sure she wanted her faithful retainers to know exactly how much of the conversations that swirled around her she managed to pick up. Eavesdropping was one of her main pleasures—there were so few left.

She hoisted herself out of bed as quickly as ninety-year-old joints would allow, so she could begin assembling the various parts—dental bridges, eyeglasses, and medications—that now made up the whole of “Old Missus.”

Twenty minutes later, she climbed back into bed. There were additional rustlings and murmurings in the hall, and the sweet young thing entered with a breakfast tray. She had initially balked at hiring the child, whose name was Cherry and whose job description was
companion/helper
. But Essie had put it in terms she couldn't fight. “I can't keep up with this big old barn of a house on my own, and you can't go on living in it all by yourself,” she'd said. “I ain't coming in some morning to find you dead in your bed or lying on the bathroom floor with your other hip broken. You let me get someone in here to sleep through the night, or I quit.”

So now young Cherry was standing in the doorway, holding the breakfast tray and wearing a fond if slightly patronizing grin. “The
Charles Valley Gazette
is here, Old Missus,” she announced.

After delivering that piece of good news, the child could call her Old Missus or Old Mushroom, she didn't give a damn. “Give it here,” she said eagerly. The
Charles Valley Gazette
was supposed to be a weekly paper, but it hadn't come for two months, and she had missed it desperately.

The Cherry child carried the tray full of clanking china and cutlery across the room with the concentration of a tightrope walker. Breakfast in bed was an indulgence Old Missus had started allowing herself lately, but she still cringed slightly when it appeared.

The girl finally came to a shaky halt at her bedside. “The paper was in your mailbox down at the post office yesterday,” she announced. “They must have sent it out from Charles Valley last week.”

“Where is Charles Valley?”

“Lawson County. May I have my newspaper, please?”

But the girl wasn't through cogitating. “I thought it wasn't anyplace around here.”

“No.” Silently, by reflex, she added,
God forbid!
Although by now it probably wouldn't matter how close she got to Charles Valley. She could march down the main street of the town shouting out her life's story over a bullhorn. No one was still alive who could possibly care. Or would they?

“Why do you get a newspaper from a town that's miles away?” her new helper asked, breaking into her thoughts. Clearly, they were making sweet young things much sharper than they used to. “I mean, it's not like there are any stories in it about the whole state or the country or anything but Charles Valley. You couldn't even buy any of the stuff in the ads over here.”

It is never easy to pull yourself up to your full height while fighting bedclothes, but she didn't get to be Old Missus for nothing. “Cherry, dear, I want my breakfast before it congeals on the plate.” She was trying for a regal tone, but it came out cranky-old-lady. These days that seemed to happen a lot.

The Cherry child settled the tray over her midsection and helped her adjust her pillows. The
Gazette
was under the bowl of oatmeal that her enthusiastic young doctor said was a real heart saver. What the hell the boy was saving that aged organ for was anyone's guess.

She pulled the paper out from under the bowl and positioned herself under the fancy new natural-light lamp she'd allowed Essie to put on her night table. She'd insisted she didn't need the damn thing, but the truth was it did make the small print easier. And the print used by most newspapers, including the
Charles Valley Gazette
, was infinitesimal. She should start a lawsuit on behalf of elderly Americans across the country being driven mad as they attempted to stay informed.

As usual, the first thing she did was look through the newspaper's table of contents for articles written by Laurel Selene McCready. For the past seven years, Ms. McCready had been listed on the paper's masthead as the assistant to the editor, Hank Barlow, although she also did double duty as a writer. But about three months ago her name had disappeared, after which there was no newspaper for two weeks. When it appeared again, a new assistant was listed on the masthead; soon that name was gone and two others appeared and disappeared in rapid succession. And the arrival of the
Gazette,
which had been a regular feature of Old Missus' Saturdays, suddenly became a random event. Sometimes it showed up on Tuesday, sometimes on Friday—if it showed up at all.

Clearly, the loss of Ms. McCready was a major catastrophe for the paper. And not just because of whatever she had done to make sure it was published each week. Since her disappearance, the damn thing was loaded with typos. But in the humble opinion of Old Missus, it was Laurel Selene's writing that was the biggest loss. The absent Ms. McCready had had a nice way with a phrase and an irreverent slant on life that gave her stories an unexpected and welcome tartness. They were better than the swill turned out by the man she had assisted, that much was sure.

“What's that picture?” asked Cherry peering over her employer's shoulder at the front page of the paper.

“Those are the azaleas at Garrison Gardens.”

“I've heard of that—some kind of vacation place, isn't it?”

“It's one of the most important horticultural centers in the country,” she responded huffily. “Didn't they teach you anything in school about your own state?” This was an overreaction, but Cherry wouldn't take offense. No one ever did when you were over ninety. No matter what you did, you were cute.

“That garden place is in Charles Valley?”

But mere geographical location didn't begin to explain the relationship of the gardens to Charles Valley, Georgia. The little town owed its livelihood to Garrison Gardens. Students from around the world came to study the work being done by their botanists. Tourists poured into the Garrison Gardens resort to enjoy the lodge, the restaurants, the golf course, the man-made lake, the tennis courts, the RV campground, the hiking and biking trails, the country store, and the phenomenal thirty-thousand-acre Garrison Nature Preserve. Ms. McCready's boss at the
Charles Valley Gazette
genuflected in print whenever he mentioned the gardens or the resort or the Garrison family that had built them. The family no longer owned the gardens, which were now part of a charitable trust. But the Garrisons—or, more accurately, Peggy Garrison, who had inherited the whole shebang from her late husband, Dalton—had a controlling voice on the board that ran the trust and retained full ownership of the very profitable resort attached to the gardens. The Garrison name—if not the bloodline—remained the eight-hundred-pound gorilla in the area.

“Would you like me to read the paper to you?” Cherry asked brightly. The girl was terminally perky. “You seem to be having a little trouble this morning.”

“I'm fine,” she answered firmly—not, she hoped, crankily. “I'll call you if I need you, dear.”

“Okay,” Cherry said, in the indulgent tone that young people used with her now. She vanished and Old Missus reached up to turn on her fancy lamp. She
was
having a little trouble this morning. With her hands, not her eyes, thank you.

Cherry had touched a nerve. It was foolish to keep renewing her subscription to the
Gazette
. Her only connection to the town had been gone for many years. But the little newspaper had become a part of her life. Some names had appeared regularly in it for so many years they were like old acquaintances. She liked to keep tabs on them. At her age, it was hard to make new friends. And it wasn't true that she had no connection to the place—there was still one person whose comings and goings had personal meaning for her. So it was with a gasp that she scanned the front page and read that Peggy Garrison was dead.