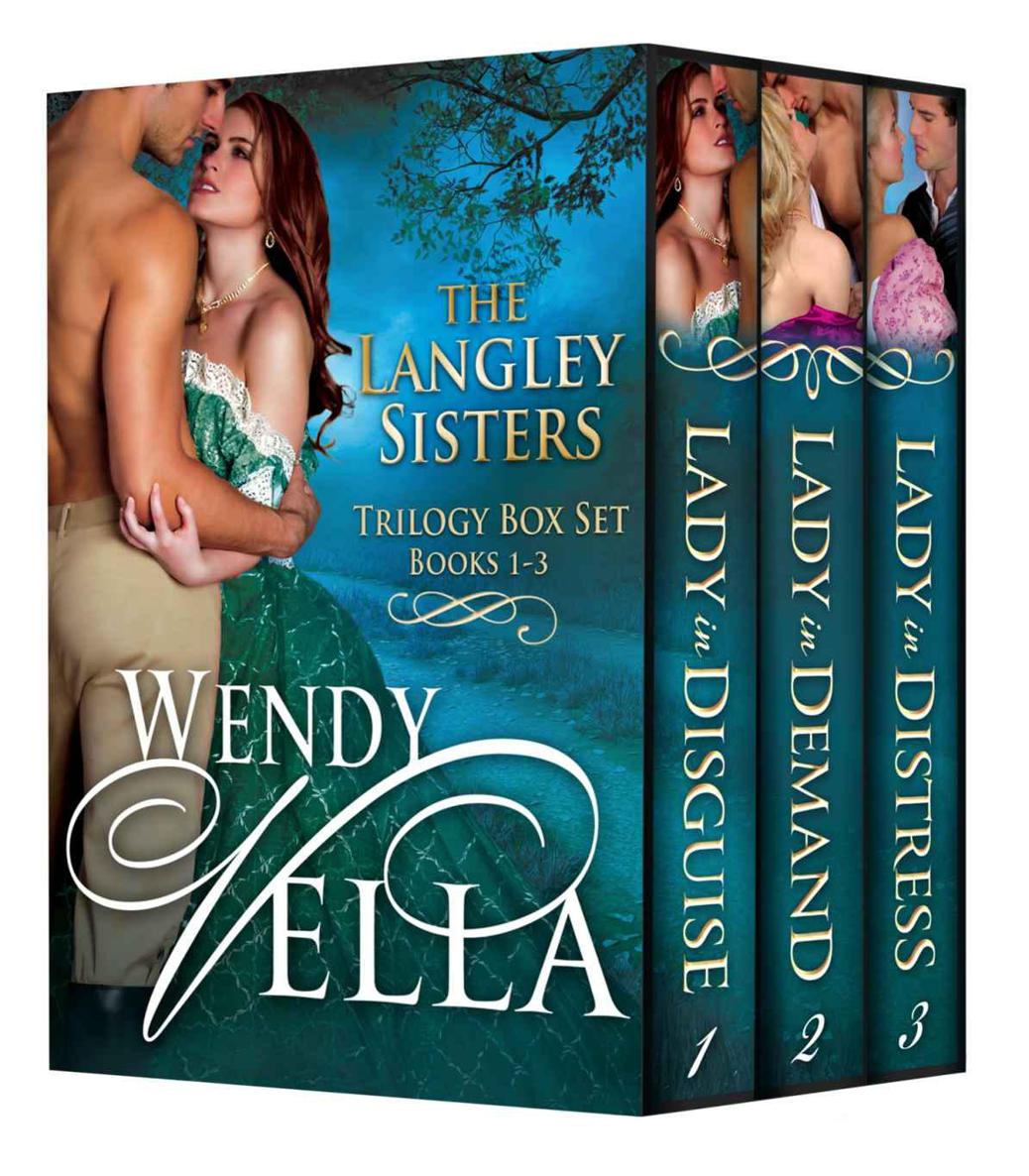 The characters and events portrayed in this book are fictitious. Any similarity to real persons, living or dead is purely coincidental and not intended by the author.

Rescued By A Viscount : Excerpt

Other Books by Wendy

To save her family from ruin, Miss Olivia Langley is forced into a dangerous charade – pulling on a disguise, she takes to the road as a highwayman. Disaster strikes when she robs the one man she had hoped never to see again. Five years ago Lord William Ryder broke Livvy's heart. Now he has returned, and she fears that if anyone can succeed at unmasking her deepest secrets, it will be him.

Lord William Ryder woke suddenly as he flew across the carriage to land face first on the opposite seat. Shaking his head in an attempt to clear the sleep-induced fog, he wondered what the hell Luke was thinking, pulling his horses to a halt so quickly. Slapping both hands on the seat, he levered himself upright.

Hands still braced on the seat, Will shook his head again; surely he hadn’t heard those words correctly.

“Those within the carriage step down at once or I will blow a hole in the side!”

In the past few years, Will had been shot, stabbed, held hostage and forced to leap from a burning ship, and now he had arrived, to what he believed the safety of his homeland, and within hours he was being robbed. If rage weren’t nipping at his heels, he’d laugh.

“I will give you a five-count!”

“I’m coming!” he bellowed, reaching for the door. Pushing it open with enough force that it banged loudly against the carriage, Will stepped down. Cooler now that dusk had settled, he could smell the trees and earth of his homeland.

“No risks, Luke,” he cautioned his driver quietly as he looked at the riders before him. “Well?” he then questioned the two masked men, waiting for one of them to speak; curiously, both seemed almost unnaturally still. “Are you robbing me, or did you want to take tea?” His drawled words had the required effect, as one of them spoke.

“Throw your money over here, or I will shoot you!”

“You had better make that shot count, because you can be assured if you miss, you won’t get a second one,” Will stated calmly, looking at the two riders. Both wore black hats pulled low to cover their eyes and scarves hid the lower half of their faces. Pistols were pointed at him and his driver. They looked menacing, yet not overly big, he thought, eyeing the slender thigh of the one closest to him.

“The penalty for robbing a peer is death I believe,” he added, reaching into his pocket and removing a money pouch.

“The penalty for starvation is the same, my lord!”

With the coin pouch now in his hand, Will looked at the man. His words were muffled, yet he could hear the desperation.

“You’ll end up with your neck stretched by the hangman’s noose if you don’t rethink your choice of career, young man.”

“Spoken like a cosseted nobleman, Lord Ryder. Now throw me that purse and we shall be on our way.”

Will paused, holding the highwayman’s gaze, and then slowly threw the purse in the air, the coins making a chinking sound as they resettled in his palm.

“It appears you have me at a disadvantage, sir. You know who I am, yet I am at a loss to remember you. Of course, that could be because you have your face covered and a pistol pointed at my head.”

Will watched the horse lift its head as the man’s hand tightened on the reins. Interesting. It was dark, and the moonlight was weak, but the highwayman had recognized him immediately, if that reaction was any indication. He’d seen the worst life could offer, yet it saddened him that someone who had crossed his path would need to steal to survive.

“This is not a social call, Lord Ryder. Just hand over the pouch and we shall leave you to continue your journey.”

“And if I say no, will you kill me where I stand?”

“Then turn your horse around and leave,” Will said, his voice now low and menacing. The gun wavered and then steadied as the man transferred the reins into the same hand as the gun, the empty one he now held out to Will.

“Throw me that pouch.”

“No.” He watched the two highwaymen look at each other after he spoke. A suspicion formed in his head as the leader raised a shoulder in a gesture that looked far too feminine for a man.

“I will shoot your driver.”

Will had not survived the last few years to be shot just miles from his home, and he realized that a young, desperate man aiming a gun at his head was a situation that could get out of hand quickly.

“Here.” He threw the bag at the leader, who caught it easily.

“Now go, before I decide that you two need to be taught a bloody good lesson in manners,” Will added, scowling at them.

They turned their horses and began to leave.

Too late, Will watched his driver’s knife sail through the air and lodge itself in the shoulder of the lead highwayman. The scream that filled the air told him his original guess had been incorrect. They weren’t youths; in fact, they were women. He took a step towards her as she lurched sideways in the saddle, but she saved herself by gripping the horse’s mane, and soon they were gone from his sight.

“Christ, I just stabbed a woman, Will.”

“Just a flesh wound, Luke. She will recover.” Will waved a hand at his friend. “Now shift over, I’ll drive from here.” Throwing a final glance in the direction the riders had taken; he then climbed up beside Luke and took the reins, eager to get home.

Forty minutes later, Will brought the horses to a halt on the rise; passing the reins to Luke, he then jumped down.

“Five years is a long time, Will.”

“Aye, Luke.” Will felt something ease inside him as he walked forward to take in the sight below. He had carried this place in his heart for so long, often believing he would never see it again.

Built by his ancestors, the gray stone walls of Rossetter House rose proudly up into the night sky. A flag fluttered from the turret that one of the previous dukes had built to add grandeur to the home. He knew every inch of the crest that was embroidered on that flag; two lions for dauntless courage, and a cross that was added for faith and service in the Crusades. Blue for truth and loyalty. In this, Will had fallen short; at the first test of loyalty, he had failed and fled.

A light twinkled in the turret room, and Will wished that he would find his mother in there spending time in her favorite room. Filled with light from sunrise to sunset, she had claimed it for her music. A cold wind ruffled his hair as memories assaulted him, memories that, until today, he had chosen to keep locked inside.

He saw his little sister crying, begging him not to leave as he stormed from the house with his brother’s angry words resonating in his head. Joseph had called him a leech on the dukedom, demanding to know when he would become the man his parents had raised him to be. Will had remembered those words. They had motivated him to become the man who stood here today.

“How can so much time have passed, Will, yet there Rossetter sits the same as it always did?”

“Its history binds it to the earth as it has for hundreds of years, Luke. It would take more than the two of us to change that.”

Would his sister and brother forgive him for his desertion?

His eyes followed the path that led to the lake, the water glittering in the moonlight. There, he had kissed Olivia Langley, the only girl to ever touch his heart, and he had walked away from her without a word too.

“It is hard to believe we are really here.”

“You forgot to add finally, Luke.”

It was time for William Ryder to go home, time to heal the wounds that had driven him away. Returning to the carriage, he once again pulled himself up onto the driver’s seat. Taking the reins, he urged them down the driveway.

“There is not even a flutter of snow, Luke. Don’t let your siblings hear you speak of it being cold. They’ll think I’ve turned you into a Molly.”

“We need to acclimatize, so Freddy told me,” Luke said, blowing on his hands.

“I hope your mother forgives me for allowing you to come to India with me.”

“As I’ve told you many times, there are eight of us,

Will.” Luke’s words were mumbled from the depths of his scarf. “I should imagine she was dead chuffed when I left.”

Luke Fletcher and Will had grown up together. His father worked in the Duke’s stables and when he was old enough he had worked there too. He had seen Will storm from the house that day and when Will had told him he was not returning to Rossetter, Luke had asked to accompany him. There had never been a moment in the past five years that Will had regretted the decision to take him.

“I’ve never said this before, Luke, but I’m grateful to you for coming with me. It would have been harder had you not been there,” Will said, pulling the carriage to a halt in the circular driveway. “To have my closest friend at hand, should I need him, was worth more than all the money we made.”

“It was an honor, Will,” Luke said gruffly, about as comfortable with sentiment as the next man.

Giving his friend a last look, Will then jumped down. Running a hand through his hair, he noticed his fingers were unsteady. Dragging in another deep lungful of cold air, he looked up the stone walls to the corner window on the third floor that had once been his bedroom. Was it still his, or had Joseph moved his belongings somewhere else?

“I’ll take the horses to the stables and then head home.”

“Good night then, Luke, and give my regards to your family. I shall call upon them soon.”

“As I was the one to lure you away, there is every need. I have no wish to be at odds with your family, my friend.”

“And yours will be happy to see you’ve returned, Will. I promise you that.”