Read The Last Days of My Mother Online

The Last Days of My Mother 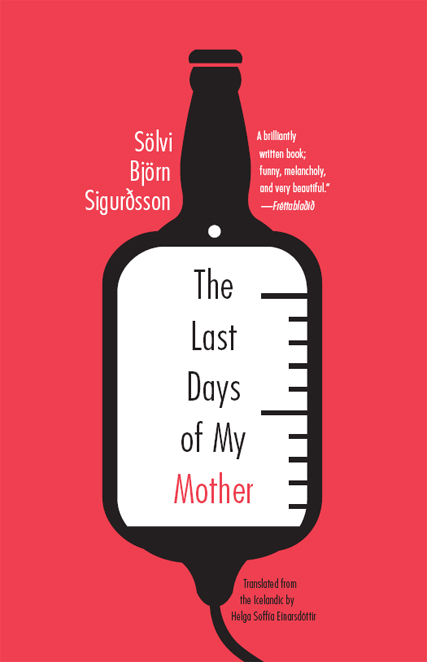 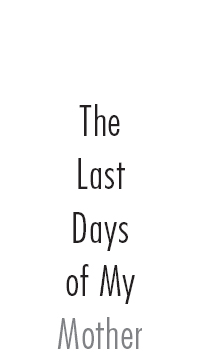 This project is supported in part by an award from the National Endowment for the Arts.

Translation of this novel was made possible thanks to the support of BÃ³kmenntasjÃ³Ã°ur - the Icelandic Literature Fund.

Text set in Dante, a mid-20th-century book typeface designed by Giovanni Mardersteig.
The original type was cut by Charles Malin.

I
had decided to take Mother to die in Amsterdam. The terminal echoed the discords of the northern gales outside, and behind us herds of drowsy people trudged along toward the security gates. Mother stood next to me in silent conversation with the cosmos while rummaging through her handbag. She believed in maximum utilization of carry-on luggage and made sure I carried my weightâand hers. I'd suggested sending a box or two by mail or paying for the extra weight, but she wouldn't hear of it. It was simply
depressing
to watch how I squandered money.

“Like that apartment you shared with Zola,” she continued while we fed our things onto the conveyor belt for the X-ray machine. “Very high maintenance, that woman. And then she just takes off with some Frenchman.”

“That's not quite what happened.”

“Mind you, you're much better off without her, Trooper. I know you don't like to talk about it, but let me just say this once and for all: she didn't deserve you.”

Mother walked through the security gate and was stopped by a young woman in uniform who ran a metal detector up and down her body. “Anything in your pockets? Belt?”

Like always, when astonished by something in my presence, Mother turned around and stared at me.

“Just take off the belt and go through again,” I said.

“What nonsense. I suppose I should take of my shoes, too?”

“Well, yes, since I see you have a metal heel,” the woman said.

“I've never met anyone so rude in my life. And I've been all over.”

“It's standard procedure. Heightened security after 9-11.”

“Nine-eleven? Do we all speak American now? Do you mean November 9th?”

“No, I mean it. First you're asked to strip and then you're ordered around in gibberish.”

“Let's just get this over with.”

Cursing under her breath, Mother walked through. The officer turned to me with a tiny pot of hair gel that I'd recently bought for a small fortune.

“I'm afraid I can't let you take this on board.”

I sighed, snatched the jar out of her hands, scooped out the contents and smeared it into my hair.

I was about to crack a joke about exploding hair gel but managed to bite my tongue. There was no way of knowing what Mother might do if this dragged on any longer.

“
Mein Gott!
” she groaned as we headed into the passenger lounge. “Finally, Trooper, we're on our way! Well, I think we deserve to sit down and have a proper drink. How about it, Trooper?
Ein Schnapps?
”

M
y life hadn't always been like this. Just a few months earlier I had been living with a woman who'd have sex with me with the lights on and found comfort in a double bed and a dishwasher, still confident that the future would roll out at least a slightly discolored red carpet. But Fortune turned her back on me. Love kicked me in the balls. Over the course of a single disastrous week in January, a seven-year relationship went down the drain. I found myself lying stark naked in a hotel room in Dublin, blinded by toxic levels of alcohol and in total ignorance of who lay next to me. My intoxication was such that I had difficulty discerning the gender of the person and didn't realize until I was alone again that whoever it was had been sexually stimulated by beating me with a stuffed animal. The experience was unpleasant, but necessary for my personal growth. I was slowly coming to understand that the various doubts I'd harbored about my relationship had been based on misunderstanding. I had squandered my happiness. The lesson was terrible and all I could do was head back home.

The dreary spring of 2008 hung over Iceland like rotten debris from the murky depths of history, threatening financial devastation, sleep deprivation. And then Mother was diagnosed with cancer.

I had accompanied her to the hospital, less than a month before we embarked on our journey. She wore a red, fitted wool two-piece, as if she believed that the better she looked the harder it would be for the doctor to deliver bad news with conviction. A woman who looked this chic at her age could hardly be at death's door.

The doctor, however, was grave. He held a pen up to his chin and gave the desk a small tap before he spoke. The test results were back and as we could see on the X-rays, the gray area on the shinbone was growing. “We believe that what we have here is sarcoma of the connective tissue.” Mother gave the doctor a cold stare and
waited for him to expand on the subject. “Fibrosarcosis is one type of osteocarcinoma, which is, in fact, rather rare in patients your age. We do see it in other mammals, cats and dogs in particular, but it's extremely rare to diagnose this disease so late in life.”

“Really now. And is there a prize?” Mother asked.

“No. Spare me the circus act, Herr Doctor. You tell me I have a disease only found in children and pets as if I'd won the lottery. It's absurd!”

Master of Bella Terra by Christina Hollis
Harrison Squared by Daryl Gregory
BOMBSHELL by Turner, Xyla
After the storm by Osar Adeyemi
The Corrigan legacy by Anna Jacobs
The Demon Soul by Richard A. Knaak
A Mind of Winter by Shira Nayman
The Book of Forbidden Wisdom by Gillian Murray Kendall
Georgia's Kitchen by Nelson, Jenny
Runner: The Fringe, Book 3 by Anitra Lynn McLeod
Our partner