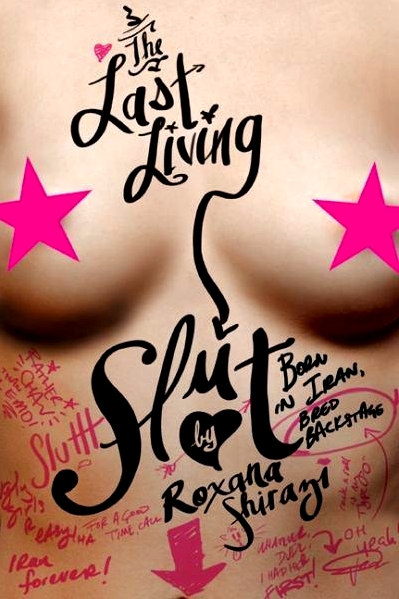 I AM THE LOVE THAT DARE NOT SPEAK ITS NAME.
LORD ALFRED DOUGLAS, “TWO LOVES” 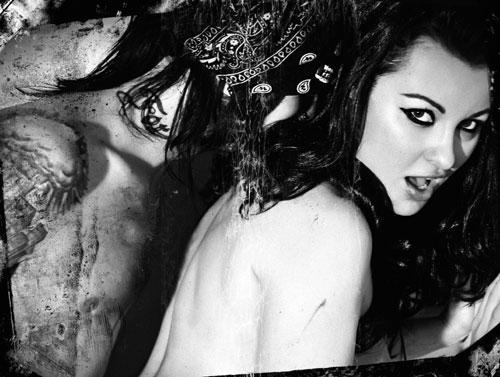 A Few Thoughts On The Word “SLUT”

She stood there, alone, at the train crossing in San Clemente, California, an explosion of denim and hair extensions, with a battered laptop in her hands.

That was the first time we saw her.

She’d taken the train from Los Angeles to show us her manuscript. We were on deadline for our own books, so we said she had an hour.

Eight hours later, some friends had joined us and we were all sitting drunk in a cabin on the beach, listening rapt as Roxana Shirazi read portions of the tale that follows.

It was the best Saturday night we’d had in a while.

“Do you want me to stop?” she’d ask in her demure English accent.

“There’s the one where I got Avenged Sevenfold to pee on me.”

At the time, this wasn’t a book yet. It was a collection of detailed notes, essays, snapshots, and journal entries of her experiences in hotels, on tour buses, and backstage mingled with childhood reminiscences. And not only was each one riveting, shining a light into the trapdoors of the rock–and-roll circus, but it was told in such a unique voice. The writing was muscular, ornate, and unapologetic. This was a woman who was not a victim, but who made rock bands her victim—and got off on pushing them to extremes that made them uncomfortable. She believed the rock-and-roll myth, and when she was unable to find anyone who lived up to it, she chose to embody it herself. Until she made the mistake of falling in love with a rock star.

All of this, in addition to her disturbing sexual coming of age in Tehran in the midst of the Iranian revolution, gelled into a story we’d never heard before. At least not told like this.

We had to get it published.

We sent a few choice excerpts to several editors and agents. They all said that after reading them, they couldn’t get the images out of their head. Yet they refused to put the book into print. Like the rock bands Shirazi had seduced, they said the book was out of their comfort zone. It was too much.

So we decided to put it out ourselves.

The Last Living Slut
is a beautiful memoir of growing up in the political turbulence of Tehran; an unflinching portrait of teenage cultural dislocation in London; a backstage romp that makes Pamela Des Barres’
I’m With the Band
read like a nun’s diary in comparison; a white-knuckled tale of jilted love and brutal revenge; and the most gripping real-life account of female depravity we’ve ever read.

The rockers mentioned in this book may still have the Polaroids, but you now have the images. And they are unforgettable. We promise you that.

A Few Thoughts On The Word “SLUT”

Quite simply
1
, slut means an individual (although the word most commonly refers to females) who frequently engages in sexual activity
2
with a lot of partners.

When describing a male who frequently engages in sexual activity with a lot of partners, the words often used are stud, player, horndog, and so onÑand sometimes male slut. However male slut is a label that men usually wear with pride; it is a term of approval and envy. A male who frequently has sex with a lot of partners is patted on the back, looked up to with admiration because he is merely carrying out a role that is assigned to him as a man. It is seen as a progressive step toward the development of masculinity. It is celebrated and encouraged. It is the equivalent of childish misbehaviour and being naughty.

With females, however, the disapproval is taken to the realm of stigmatization.

A female’s pursuit of sexual pleasure and sexual adventure is still seen as a negative characteristic, somehow making her a bad human being. A female is not defined in terms of her humanity, but in terms of her sex life.

So, logically, does enjoying sex with different partners make someone a bad person? How can an individual’s sex life define them wholly as a human being? Surely human beings should be measured by their human qualities and characteristics: kind-hearted, funny, lazy, expressive, determined, shy, mean, boring, bossy, happy-go-lucky, and so on.

Sentinel by Joshua Winning
Brass and Bone by Cynthia Gael
Juggernaut by Nancy Springer
When the Glitter Fades (Cowboys of Whispering Winds) by Renee Peterson
The Killing Ground by Jack Higgins
Meet Me in Venice by Elizabeth Adler
Castle Rouge by Carole Nelson Douglas
Late Night with Andres by Anastasia, Debra
Crucifixion Creek by Barry Maitland
As Tears Go By by Lydia Michaels
Our partner