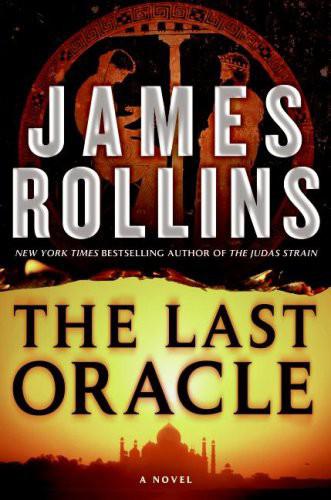 To Shay and Bryce,
because you both rock

From the Historical Record

Other Books by James Rollins 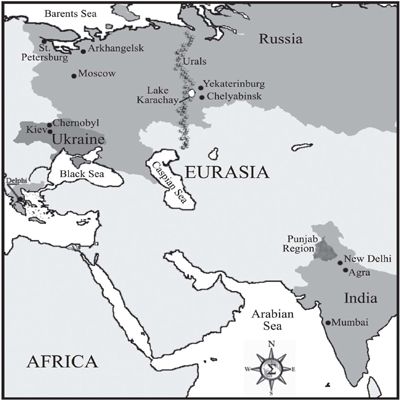 FROM THE HISTORICAL RECORD

The greatest blessings granted to mankind come by way of madness, which is a divine gift.

—SOCRATES, ON THE
ORACLE OF DELPHI

Ancient Greeks, with their pantheon of gods, held an abiding belief in the powers of prophecy. They revered those who could read the portents in the entrails of goats, who saw the future in the rising smoke of a sacrificial fire, who predicted events based on the auguries of tossed bones. But one individual was held in the highest esteem: the mystical Oracle of Delphi.

For almost two thousand years, a succession of closely guarded women resided within the temple to Apollo on the slopes of Mount Parnassus. Each generation, a single woman ascended to the seat of prophecy and took the name Pythia. While under a vapor-induced trance, she answered questions about the future—from the mundane to the profound.

Her admirers included leading figures of Greek and Roman history: Plato, Sophocles, Aristotle, Plutarch, Ovid. Even early Christians revered her. Michelangelo painted her prominently on the ceiling of the Sistine Chapel, foretelling the coming of Christ.

But was she a charlatan, duping the masses with cryptic answers? No matter the truth, one fact is beyond dispute. Revered by kings and
conquerors across the ancient world, Pythia’s prophecies changed the course of human history.

And while much about her remains shrouded in mystery and mythology, one truth has emerged. In 2001, archaeologists and geologists discovered a strange alignment of tectonic plates under Mount Parnassus that has been shown to vent hydrocarbon gases, including ethylene, which is capable of inducing a trancelike euphoria and hallucinations, the very vapors described in the historical record.

So while science has discovered one of Pythia’s secrets, the ultimate truth remains unknown:

Did the Oracle truly foresee the future? Or was it divine madness?

Man, know thyself, and thou wilt know the universe and the gods.

—INSCRIPTION AT THE TEMPLE OF DELPHI

They had come to slay her.

The woman stood at the temple’s portico. She shivered in her thin garment, a simple shift of white linen belted at the waist, but it was not the cold of predawn that iced her bones.

Below, a torchlight procession flowed up the slopes of Mount Parnassus like a river of fire. It followed the stone-paved road of the Sacred Way, climbing in switchbacks up toward the temple of Apollo. The beat of sword on shield accompanied their progress, a full cohort of the Roman legion, five hundred strong. The road wound through broken monuments and long-ransacked treasuries. Whatever could burn had been set to torch.

As the firelight danced over the ruins, the flames cast a shimmering illusion of better times, a fiery restoration of former glory: treasuries overflowing with gold and jewels, legions of statues carved by the finest artisans, milling crowds gathered to hear the prophetic words of the Oracle.

Over the past century, Delphi had been brought low by invading Gauls, by plundering Thracians, but most of all, by neglect. Few now came to seek the words of the Oracle: a goat herder questioning a wife’s fidelity, or a sailor seeking good omens for a voyage across the Gulf of Corinth.

It was the end of times, the end of the Oracle of Delphi. After prophesying for thirty years, she would be the last to bear the name Pythia.

The last Oracle of Delphi.

But with this burden came one final challenge.

Pythia turned toward the east, where the sky had begun to lighten.

Oh, that rosy Eos, goddess of dawn, would hurry Apollo to tether his four horses to his Sun chariot.

One of Pythia’s sisters, a young acolyte, stepped out of the temple behind her. “Mistress, come away with us,” the younger woman begged. “It is not too late. We can still escape with the others to the high caves.”

Pythia placed a reassuring hand on the woman’s shoulder. Over the past night, the other women had fled to the rugged heights where the caves of Dionysus would keep them safe. But Pythia had a final duty here.

“Mistress, surely there is no time to perform this last prophecy.”

“Then do it now. Before it is too late.”

Pythia turned away. “We must wait for dawn of the seventh day. That is our way.”

As the sun had set last night, Pythia had begun her preparations. She had bathed in Castilia’s silver spring, drank from the Kassotis spring, and burned bay leaves on an altar of black marble outside the temple. She had followed the ritual precisely, the same as the first Pythia thousands of years ago.

Only this time, the Oracle had not been alone in her purifications.

At her side had been a girl, barely past her twelfth summer.

Such a small creature and of such strange manner.

The child had simply stood naked in the spring waters while the older woman had washed and anointed her. She’d said not a word, merely stood with an arm out, opening and closing her fingers, as if grasping for something only she could see. What god so suffered the child, yet blessed her just the same? Surely not even Apollo. Yet the child’s words thirty days ago could come only from the gods. Words that had plainly spread and stoked the fires that now climbed toward Delphi.

Oh, that the child had never been brought here.

Pythia had been content to allow Delphi to fade into obscurity. She remembered the words spoken by one of her predecessors, long dead for centuries, an ominous portent.

Emperor Augustus had asked of her dead sister, “Why has the Oracle grown so silent?”

Her sister had responded, “A Hebrew boy, a god who rules among the blessed, bids me leave this house…”

Those words proved to be a true prophecy. The cult of Christ rose to consume the empire and destroyed any hope for a return to the old ways.

Then a moon ago, the strange girl had been brought to her steps.

Pythia glanced away from the flames and toward the adytum, the inner sanctum of Apollo’s temple. The girl waited inside.

She was an orphan from the distant township of Chios. Over the ages, many had hauled such children here, seeking to abandon such burdens upon the sisterhood. Most were turned away. Only the most ideal girls were allowed to stay: straight of limb, clear of eye, and unspoiled. Apollo would never accept a vessel of lesser quality for his prophetic spirit.

So when this willow branch of a girl had been presented naked to the steps of Apollo’s temple, Pythia had given her hardly a glance. The child was unkempt, her dark hair knotted and tangled, her skin marked with pox scars. But deeper, Pythia had sensed something
wrong
with the child. The way she rocked back and forth. Even her eyes stared without truly seeing.

Her patrons had claimed the child was touched by the gods. That she could tell the number of olives in a tree with merely a glance, that she could declare when a sheep would lamb with but a touch of her hand.

Upon hearing such stories, Pythia’s interest had stirred. She called the girl to join her at the entrance to the temple. The child obeyed, but she moved as if disconnected, as if the winds themselves propelled her upward. Pythia had to draw her by hand to sit on the top step.

“Can you tell me your name?” she asked the thin child.

“Her name is Anthea,” one of her patrons declared from below.

Pythia kept her gaze focused on the child. “Anthea, do you know why you’ve been brought here?”

“Your house is empty,” the child finally mumbled to the floor.

So at least she can speak
. Pythia glanced to the temple’s interior. The hearth fire burned in the center of the main hall. It was indeed empty at the moment, but the child’s words seemed to whisper at something more.

Maybe it was her manner. So strange, so
distant
, as if she stood with one leg in this world and the other beyond this realm.

The child glanced up with those clear blue eyes, so full of innocence, so in contrast with what spilled next from her lips.

From below, her patron attempted to scold her, but Pythia kept her words soft. “We all die eventually, Anthea. It is the order of the world.”

She shook her head. “Not the Hebrew boy.”

Those strange eyes bored into her. The hairs along Pythia’s arms shivered. Plainly the girl had been taught the catechism of the cult of Christ and his bloody cross. But her words again. Such strange cadence.

It reminded her of her ancestor’s prophecy of doom.

“But another will come,” the girl continued. “Another boy.”

“Another boy?” Pythia leaned closer. “Who? From where?”

“From my dreams.” The girl rubbed the heel of one hand at her ear.

Sensing there were depths to the girl that remained untapped, Pythia plumbed them. “This boy?” she asked. “Who is he?”

What the child said next drew a gasp from the gathered crowd—even they recognized blasphemy when they heard it.

“He is the brother of the Hebrew boy.” The child then clasped tight to the hem of Pythia’s skirt. “He burns in my dreams…and he will burn everything. Nothing will last. Not even Rome.”

For the past month, Pythia had attempted to learn more of this doom, even taking the girl into the sisterhood’s fold. But the child had seemed only to retreat into herself, going mute. Still, there was one way to learn more.

If the girl were truly blessed, the power of Apollo’s breath—his prophetic vapors—might burn free what was locked within the girl’s strangeness.

But was there enough time?

A touch to her elbow interrupted her reverie and drew her back to the present. “Mistress, the sun…,” her younger sister urged.

Pythia focused to the east. The eastern skies blazed, heralding the coming sunrise. Below, shouts rose from the Roman legion. Word of the
girl had spread. Prophecies of doom had traveled far…even to the ears of the emperor. An Imperial courier had demanded the child be delivered to Rome, declaring her demon-plagued.

Stolen Stallion by Brand, Max
The Second Son by Bob Leroux
My Masters' Nightmare Season 1, Episode 7 Connections by Marita A. Hansen
Josephine Baker by Jean-Claude Baker, Chris Chase
Ammunition by Bruen, Ken
Awakening the Beast by Crymsyn Hart
Vacation to Die For by Josie Brown
Strawberry Summer by Cynthia Blair
We Are What We Pretend to Be by Kurt Vonnegut
The Nightmare Vortex by Deborah Abela
Our partner