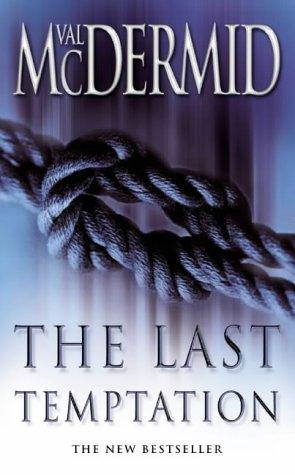 Val McDermid grew up in a Scottish mining community then read English at Oxford. She was a journalist for sixteen years, spending the last three years as Northern Bureau Chief of a national Sunday tabloid. Now a full-time writer, she lives in Cheshire.

The Last Temptation is Val McDermid’s third book featuring criminal profiler, Tony Hill. The first, The Mermaids Singing, won the 1995 Gold Dagger Award for Best Crime Novel of the Year while the second, The Wire in the Blood, has given its name to a television series based on the Tony Hill novels, featuring Robson Green and Hermione Norris.

A Place of Execution Killing the Shadows

The Wire in the Blood The Mermaids Singing

Nonfiction A Suitable Job for a Woman

The Last Temptation Š 2002 by Val McDermid. All rights reserved.

The author asserts the moral right to be identified as the author of this work.

This novel is entirely a work of fiction. The names, characters and incidents

portrayed in it are the work of the author’s imagination. Any resemblance to

without the prior written permission of HarperCollins Publishers Ltd.,

except in the case of brief quotations embodied in reviews.

HarperCollins books may be purchased for educational, business, or sales promotional use through our Special Markets Department.

not much of a gift by comparison,

but the best I can do.

Moving off one’s home turf carries with it many risks. Those who assisted in minimizing those risks include: Pieke Bierman and Tom Wortche, who found the Irish pub in Berlin and provided many other important and invaluable research sources besides; Jeanet van Wezel, who showed me Leiden; Jurgen and Marita Alberts, who introduced me to Bremen; Ron Mackay, who smuggled me in where I shouldn’t have been; Hartmut Geisser, who took me on the Spree and shared a lifetime’s experience of the world of commercial schippermen; Captain Kirk Schoorman and Nils Clausen for their insights into life on the water; Adrian Muller for \ assistance with the Dutch police organization; and Dr Sue Black for her help with pathological detail. Thanks too to the British Council, who first took

me to Kohi and Berlin, and to LitFest Koln, who allowed me to renew my acquaintance with their city.

I would also like to thank Gill Lockwood and the staff of the ACU at Leeds General Infirmary, the CDU and SM4 at St Mary’s Hospital, Manchester, without whose efforts this book would have been much easier to write … And all of those who gave support of various kinds at crucial stages in the writing - Lisanne, Julia, Jane, Diana, Kate, Leslie and, more than anyone, Brigid.

I have taken some diabolical liberties with the geography of various European cities and the organization of assorted law enforcement agencies But this is a work of fiction, which means the reader must forgive my playing fast and loose with reality. At least I got the rivers right.

The last temptation is the greatest treason: To do the right deed for the wrong reason.

Only when it is responsible for providing psychological diagnoses for state purposes does psychology really become important.

Comments: The patient has clearly been troubled for some time with an overweening sense of his own infallibility. He presents with a disturbing level of overconfidence in his own abilities. He has a grandiose self-image and is reluctant to concede the possibility that he might be subject to valid criticism.

When challenged, he appears offended and clearly has difficulty masking his indignation. He sees no need to defend himself, regarding it as self-evident that he is right, in spite of all evidence to the contrary. His capacity for self-analysis is clearly limited. A typical response to a question is to deflect it with a question of his own. \ He shows a marked reluctance to examine his own behaviour or the consequences of his actions.

He lacks insight and the concept of a wider responsibility. He has mastered the appearance of affect, but it is unlikely that this is more than a convenient mask.

Blue is one colour the Danube never manages. Slate grey, muddy brown, dirty rust, sweat-stained khaki; all of these and most of the intermediate shades sabotage the dreams of any romantic who stands on her banks. Occasionally, where boats gather, she achieves a kind of oily radiance as the sun shimmers on a skin of spilled fuel, turning the river the iridescent hues of a pigeon’s throat. On a dark night when clouds obscure the stars, she’s as black as the Styx. But there, in central Europe at the turning of the new millennium, it cost rather more than a penny to pay the ferryman.

From both land and water, the place looked like a deserted, rundown boat repair yard. The rotting ribs of a couple of barges and corroded components from old machinery, their former functions a mystery, were all that could be glimpsed through the gaps in the planks of the tall gates. Anyone curious enough to have stopped their car on the quiet back road and peered into the yard would have been satisfied that they were looking at yet another graveyard for a dead communist enterprise.

But there was no apparent reason for anybody to harbour idle curiosity about this particular backwater. The only mystery was why, even in those illogical totalitarian days, it had ever been thought there was any point in opening a business there. There was no significant population centre for a

dozen miles in any direction. The few farms that occupie the hinterland had always required more work to make then profitable than their occupants could provide; no spare hand there. When this boatyard was in operation, the workers haci been bussed fifteen miles to get to work. Its only advantage was its position on the river, sheltered from the main flow by a long sandbar covered in scrubby bushes and a few straggling trees leaning in the direction of the prevailing wind.

That remained its signal selling point to those who covertly used this evidently decaying example of industrial architecture from the bad old days. For this place was not what it seemed. Far from being a ruin, it was a vital staging post on a journey. If anyone had taken the trouble to give the place a closer look, they would have started to notice incongruities. The perimeter fence, for example, made of sheets of prefabricated reinforced concrete. It was in surprisingly good repair. The razor wire that ran along the top looked far more recent than the fall of communism. Not much to go on, in truth, but clues that were there to be read by those who are fluent in the language of deviousness.

If such a person had mounted surveillance on the apparently deserted boatyard that night, they would have been rewarded. But when the sleek black Mercedes purred along the back road, there were no curious eyes to see. The carj halted short of the gates and the driver climbed out, shivering momentarily as cold damp air replaced the climate controlled environment. He fumbled in the pockets of his leather jacket, coming out with a bunch of keys. It took him a couple of minutes to work his way through the four unfamiliar padlocks, then the gates swung silently open under his touch. He pushed them all the way back, then hurried back to the car and drove inside.

As the driver closed the gates behind the Mercedes, two

men emerged from the back of the saloon. Tadeusz Radecki stretched his long legs, shaking the creases out of his Armani suit and reaching back into the car for his long sable coat. He’d felt the cold as never before lately, and it was a raw night, his breath emerging from his nostrils in filmy plumes. He pulled the fur close around him and surveyed the scene. He’d lost weight recently, and in the pale gloom cast by the car’s headlamps the strong bones of his face were a reminder of the skull beneath the skin, his darting hazel eyes the only sign of the vitality within.

Darko Krasic strolled round to stand beside him, angling his wrist up so he could see the dial of his chunky gold watch. ‘Half past eleven. The truck should be here any minute now.’

Tadeusz inclined his head slightly. ‘I think we’ll take the package ourselves.’

Krasic frowned. ‘Tadzio, that’s not a good idea. Everything’s set up. There’s no need for you to get so close to the merchandise.’

‘You think not?’ Tadeusz’s tone was deceptively negligent. Krasic knew better than to argue. The way his boss had been acting lately, not even his closest associates were prepared to risk the flare of his anger by crossing him.

Krasic held his hands up in a placatory gesture. ‘Whatever,’ he said.

Tadeusz stepped away from the car and began to prowl the boatyard, his eyes adjusting to the gloom. Krasic was right in one sense. There was no need for him to involve himself directly in any aspect of his business. But nothing was to be
taken for granted just now. His mindset had been shaped by his grandmother, who, in spite of the noble blood she insisted flowed in her veins, had been as superstitious as any of the peasants she’d so despised. But she’d dressed up her irrational convictions in the fancy clothes of literary allusion. So, ratherp>

than teach the boy that troubles come in threes, she’d enlisted Shakespeare’s adage that ‘When sorrows come, they come not single spies, but in battalions’.

Katerina’s death should have been sorrow enough. Tadeusz prided himself on never allowing his face to give him away, either in business or in personal relationships. But that news had transformed his face into a howling mask of grief, tears flooding his eyes as a silent scream tore through him. He’d always known he’d loved her; he just hadn’t grasped how much.

Ethans Fal by Dee Palmer
Death Du Jour by Kathy Reichs
Luxe Glamour (The Glamour Series Book 5) by Maggie Marr
Breathe for Me by Rhonda Helms
By Murder's Bright Light by Paul Doherty
If the Witness Lied by Caroline B. Cooney
Debt of Ages by Steve White
Love On My Mind by Tracey Livesay
2 Grand Delusion by Matt Witten
The Saving of Benjamin Chambers (The Uni Files) by Bloom, Anna
Our partner