Read The Law of Loving Others Online

The Law of Loving Others 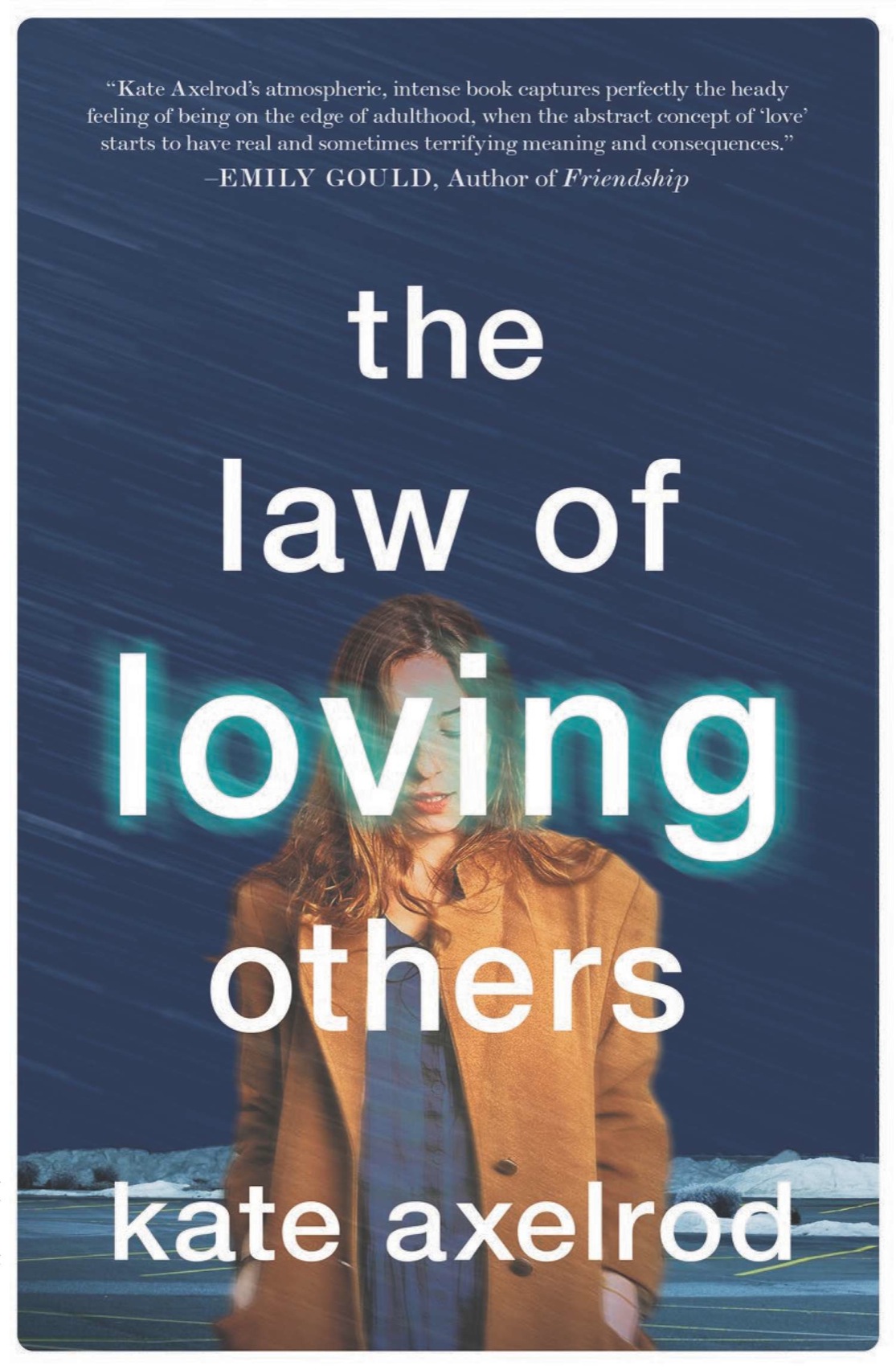 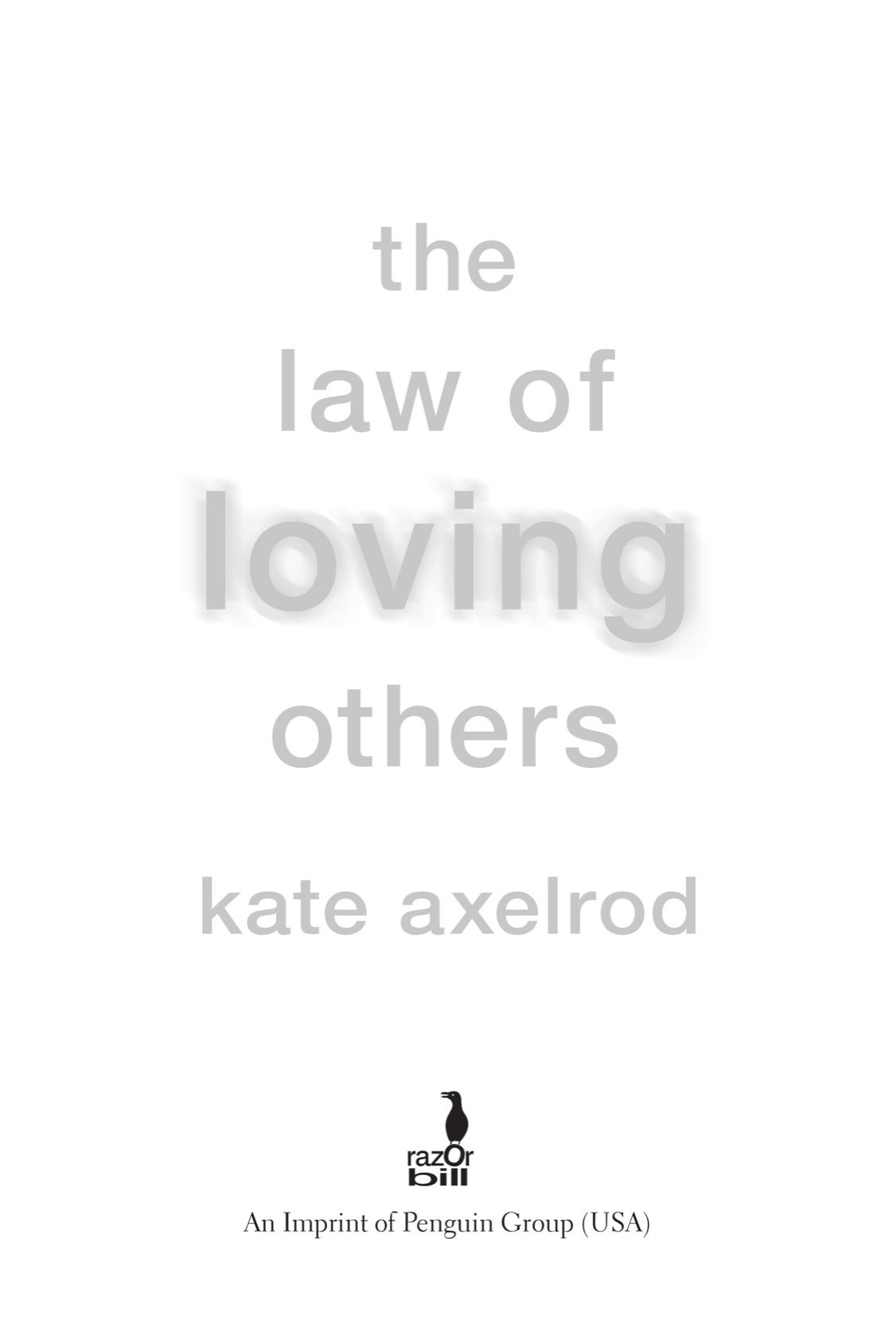 This is a work of fiction. Names, characters, places, and incidents either are the product of the author's imagination or are used fictitiously, and any resemblance to actual persons, living or dead, businesses, companies, events, or locales is entirely coincidental.

For Judy and Leon Thurm, always.

IT was a Friday in the middle of December, the day after Daniel and I had finished our finals, and we were leaving Pennsylvania for New York. The sky was heavy and gray as we left campus and drove toward town, which was mostly quiet. At the second traffic light, I jumped out and ran into a coffee shop on the corner. I grabbed two hot coffees and a chocolate croissant stuffed into a waxy paper bag for us to share. It had snowed earlier in the week and the bare branches were still covered in a sheath of ice. Winter in Pennsylvania was bleak, but still there was something beautiful in its nearly silent emptiness. We drove south toward the interstate, past miles of fields punctuated with farm houses, small squares of red in the distanceâan easy calm before the suburban rush of Walmarts and Olive Gardens and vast parking lot after parking lot.

We'd only driven a handful of miles when I turned toward Daniel and kissed his shoulder.

“Okay, it's fine. We have like a quarter of a tank left anyway. We'll stop when it runs out. Like an hour and a half?”

“I'm kidding,” he said and he smiled, displaying a bottom row of crowded teeth. Daniel had told me recentlyâafter I'd commented on how endearing I'd found them, a rare imperfection in his otherwise flawless faceâthat he'd somehow persuaded his parents and orthodontist to remove his braces several months early, because he refused to start ninth grade with all that clunky metal attached to his teeth. I'd loved hearing this about him, and how assertive he had been even then, at fourteen, when I'd been at the peak of my own insecurity.

“You weren't kidding! You're such an asshole.”

Daniel slid his right hand between my legs. “It's so cold,” he said. “Warm me up. And yes, of course I'm kidding, but if you want”âhe gestured backward with a twist of his neckâ“there's an empty Snapple bottle back there. You want?”

“Okay sure, no problem.” I reached behind the front seat and leaned over to grab the Snapple bottle. I unbuttoned my jeans and began to unzip my fly but then stopped, smiled at him.

“Double dare you,” he said.

“Of course. I used to watch those reruns all the time. When I was little, all I wanted to do was get covered in those buckets of green slime.”

“If we get married, can we try to go on
Family Double Dare
together?”

“Yes!” Daniel said. “They'll have to bring it back on the air. That can be our honeymoon, straight to Universal Studios. So romantic.”

We had been dating for about four monthsâthe entire first semester of my junior year, which, in the strange, warped way that time moved in boarding school, felt significant. We'd sat next to each other the first day of our American history class, and then exchanged a flurry of e-mails before hanging out one night after school, in the beginning of September. Daniel had somehow managed to procure a bottle of whiskey, and we sat on a patch of grass behind my dorm, took long sips from the stout, amber bottle. We played this game called “Eye-rhymes” where you have to think of two words that were spelled the same but sounded different.
Daughter
and
laughter. Rough
and
dough. Good
and
food.
We alternated back and forth until Daniel was tipsy and I was drunk and could no longer think of appropriate pairs, and then I began demanding all sorts of word play from him.

“Oh, I know this one. How about wolf and fowl?”

I sat up and rearranged myself so that I was sitting cross-legged, facing him. “When I was in second grade, we were having a homonym lesson, homophones, whatever they're called. And the teacher kept asking us to give examples. And I shot my hand up, so excited, and said âversion and virgin.' I mean,
what
was I talking about? I was seven!”

“What a racy second-grader.”

I took a slow sip of whiskey, and when I was done, we made eye contact for a brief moment before he kissed me. It was only an instant, but still I was struck with that dizzying feeling: something is happening. Something important is happening to me
right now
.

DANIEL was a junior also, but he'd been at Oak Hill Friends since ninth grade, and I had transferred as a sophomore. He was from Manhattan and had a certain laid-back way about himâhe was confident and self-possessed and made me feel at ease, too. Transferring in as a sophomore had been a difficult thingâthe rush and eagerness of freshman year had subsided, and students no longer roamed around in packs trying to stave off loneliness, or the fear of upperclassmen. I had gone back and forth about going away to school, conflicted because this wasn't the sort of thing anyone in my family had ever done (we were a family of worriers, overprotective, anxious, and on a more superficial level, we weren't the sort who carried the monogrammed tote bags or wore the Patagonia fleeces that screamed prep school). But I'd also been nurturing a fixation on boarding school since the beginning of seventh grade, when I spent one rainy October afternoon watching a marathon on TBS that included
Dead Poets Society
and
School Ties
. Even as Brendan Fraser's Jewish character was cruelly snubbed by his blue-blood classmates, I felt myself longing for that sort of prep school life. It was then that I began to romanticize the idea of boarding school: the old dining halls ornamented with delicate chandeliers and bronze plaques, the libraries with arched ceilings, long cherry-wood tables, and stained glass windows. It was all so sophisticated in a way that I was not. I even idealized the lonelinessâimagined myself staying in on a Friday night, immersed in some nineteenth-century British novel or writing away about a depressed confessional poet.

Once ninth grade began (and all its complicated politics), anything was more appealing than the boredom I felt at my suburban high schoolâa boredom that seemed to be the worst kind of ordinary despondency. I was tired of being held hostage to the younger version of myself, who had never gotten below an A on an exam, had never clashed with anybody. And so it wasn't until then that I felt more ready,
less hesitant
,
to even apply.

But still, by the beginning of eleventh grade, I wasn't entirely happy at Oak Hill, hadn't fallen into a group of friends in a way that felt organic and right, and meeting Daniel had added a sort of welcome levity to my life at school. It was as if suddenly my life
was
there. My mind was no longer elsewhere, counting the days until I could go back to Westchester and see my friends from home, waiting eagerly for small holiday weekends and other excuses to leave campus.

Of course there were still times when I had my doubts about Daniel; it wasn't as though things were perfect between us. As I'd told my friend Annie on the phone, he wasn't a readerâand that was a potential issueâand sometimes he'd cancel plans with me so he and his friends could get fucked up and do crazy stuff like light old furniture on fire, and why was he so obsessed with ice luges? But I liked how unpretentious he was, so uninterested in posturing about writers or philosophers, especially compared to other people at Oak Hill. Once I'd walked into the locker room after swim class and two girls, while peeling off their navy Speedos, were arguing about who was the hottest of some eighteenth-century philosophers (I only dimly recognized their names, but I remember that David Hume was the pronounced winner). Daniel didn't take himself too seriously, and mostly he just made me laugh. He was a wonderful companion and my chest ached when I left him after lunch to go to class.
Heartburn!
I would say, and this became our thing, always giving each other little packets of Tums as parting gifts.
Heartburn!

WE drove east on I-80, hitting pockets of traffic, people slowing down when the roads were windy and sharply curved, especially cautious of the snow packed into the mountains to the east. In the fall, driving home for Thanksgiving had been a beautiful trip; the foliage along the interstate was so brightâdeep orange-and-red leaves ornamenting the otherwise dull and unchanging stretches of highway. But that day, in the middle of December, everything cloaked in white, the trees and brush blurred into a single graying landscape.

By the time we hit the New Jersey border, both of us were restless and bored. We'd been playing “Fuck, Marry, Kill” for twenty exits, and had used up everyone we knew from school, everyone we'd already made out with, plus some obvious celebrities.

“Okay, we need to get a little more creative,” I said. “Burger King, McDonald's, Wendy's.”

“Should proximity to the highway have any bearing on my decision?”

“What! That makes no sense. Obviously you should kill
New York
magazine, fuck the
New Yorker,
and marry the
New York Times
.” That I even knew the distinction between these magazines was something novelâthe Oak Hill library received the
New Yorker
each week, and though I hadn't ever read it at home, it was something I looked forward to at school, a way to keep up with my peers who always seemed to know a little bit more than I did about esoteric writers and high-brow intellectuals.

“I almost don't want to even ask you what that means,” Daniel said.

“You'd sleep with anyone with a glossy cover.”

“That makes no sense,” he said, “and actually, I have a weird feeling you're getting jealous about this.”

“Not
this
,” I said. (I was jealous, always. I tried to control it but every time he looked at his texts and I saw his inbox filled with messages from Lily, Jen, or Vicky, I'd feel my stomach tense up, filled with the fear, the anticipation, of infidelity.)

“I'm sorry that you think I've slept with everyone in the world, but you just have to get over it. It's not like you were a virgin when we met.”

“That's not a thingÂ .Â .Â . You either were or you weren't. And you weren't! You lost your virginity when you were fifteen too.”

“Yeah, but that was with my
boyfriend
. I've never had like, âcasual' sex.” The very nature and meaning of that phrase was not something I really understood or felt connected to. I wondered if there would be a time when such an expression would just roll off my tongue, when I would be able to say honestly, in an offhand way,
oh yeah I slept with that guy one time, it was nothing
.

“Okay, I'm not indulging you anymore. Enough! You want me to kick you out onto the highway?” Daniel said.

“Okay, I'm sorry!” I unbuckled my seatbelt for a moment, leaned over to kiss his neck, the side of his face.

“All right, let's get back to the wholesome stuff. Here are your choices, regular bacon, turkey bacon, soy bacon.”