Read The Law Under the Swastika Online

The Law Under the Swastika 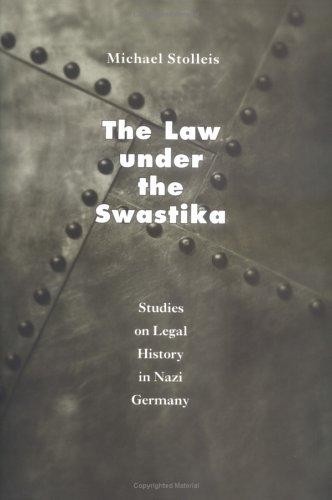 Michael Stolleis holds the chair in public law and early modern legal history at the Johann Wolfgang Goethe-Universitat, Frankfurt am Main. He is the author of
Geschichte des offentlichen Rechts in Deutschland
(2d edition 1992).

The Law under the Swastika

PART ONE
The Study of National Socialist Legal History

1.
Biases and Value Judgments in the Study of National Socialist Legal History

2.
Legal History during the Nazi Period: Outlines of a Scholarly Field

3.
Was there “Progress in Legal History” during the Nazi Period?

5.
In the Belly of the Beast: Constitutional Legal Theory (
Staatsrechtslehre
) under National Socialism

6.
The Science of Administrative Law under National Socialism

7.
The “Revival of Administrative Studies” (
Verwaltungslehre
) under National Socialism

9.
“Harsh but Just”: Military Justice in the Service of National Socialism

10.
The White Rose and Its Judges

12.
Theodor Maunz: The Life of a Professor of Constitutional Law

Only an extraterrestrial could describe an oxymoron like “justice in the Third Reich” in a responsible neutral manner. Otherwise, everything written on this matter can only be considered either an apology or an indictment, depending on the origin or approach of the author. Being of German origin or citizenship is sufficient to render an author a priori biased, even in his or her own eyes. This is precisely the case with Michael Stolleis, author of this collection of articles whose German title can be translated as
Justice within Injustice
. Stolleis feels he lacks “detached observation in dealing with National Socialism” because he is German and because he was shaped as a lawyer by the legal system and values of postwar Germany. Even the self-imposed commitment to neutralize the normative influence of these forces or to avoid “depicting the past in a distorted manner,” earnestly pursued by the author, may not be considered satisfactory by all. Hence this additional introduction, written by one who, considered representative of the non-German view, belongs to the collective group of the victims of the National Socialist legal system.

Here a personal note is relevant: My father became a German citizen in 1929 according to the law and constitution of the Weimar Republic. Revoked by Nazi Germany in 1941 (three years after he had left for Palestine), his citizenship was not only eventually reinstated, consistent with the Basic Law of the Federal Republic of Germany, but also given to his son—again, consistent with the law of the Federal Republic. The irony of this personal connectedness to the legal framework of modern Germany helps explain the interest of an Israeli social historian in a topic that is usually outside his direct sphere of interest.

For a social historian as well as for the historian of mentality, it is specifically the philosophical debate about the quarrel between natural law and positive law that is central—a debate beyond the scope of the author’s primary interest in this volume. After all, this is the debate that underlies the legal reckoning with the Third Reich. This explains
the difficulty in choosing between the titles
Law (Justice) within Injustice (Recht im Unrecht)
and
Injustice within the Framework of Law (Unrecht im Recht)
for the German publication. In the German version the author cautiously opted for the first alternative. He considered the whole system unjust and thus referred to the lawmaking and legal procedure within this framework as a mere mechanism, without the spirit of justice. He did this undoubtedly because the system was an affront to natural rights and natural law. For those less cautious observers who respect positive law over natural law, the second alternative might have been as legitimate as the first: After all, the Weimar constitution, together with the traditional criminal and civil code, continued to exist in a modified way, enabling the traditional system to function under revolutionary and inhumane circumstances. Yes, the debate is essentially about natural vs. positive law.

However the interrelation between law and justice in the Nazi system is described, one conclusion becomes evident: Where the book of laws (among other things) is concerned, the Nazi revolution seems less radical by far than other revolutions, above all in comparison with the communist revolution. There is much continuity to be observed, leading from the Second German Reich (1871–1918), to the Weimar Republic (1918–1933), to the Third Reich (1933–1945), and then, surprisingly enough, to the postwar German republics, west and east.

Two factors explain this appearance of continuity. The first is the exclusion of specific segments of lawmaking and law enforcement (such as the concentration camps) from the main system. The second is the very gradual erosion in practice of rights that were formally valid, under pressure of both revolutionary ideology and the new apparatuses it created. Therefore, an important question must be asked: When did the legal system in Germany reach the point of no return and become a totally new one, creating a new system of (in)justice? Was that point already reached less than a month after Hitler’s rise to power, when the “Emergency Regulations for the Defense of the People and the State” were promulgated (February 28, 1933) as a reaction to the Reichstag having been set on fire? Was it in March 1933, with the Enabling Law, practically uniting the executive and the legislature? Was it only later, with the laws establishing the authority of the Gestapo (February 10, 1936)? Or perhaps this point was never reached, and the system as a whole was more of a variation on the previous system than a break with it.

Whether we look at the essence of law, at the way the system functioned, or at the equilibrium between the different forces of law and law enforcement of the Third Reich, it becomes quite clear that the
system of injustice was characteristic of this regime from the beginning. Even more, as Stolleis states very clearly, “it is a myth that some areas remained entirely untouched by the political claims of the system.” This myth was nourished by cynical laymen who could argue, for instance, that the Weimar constitution was never formally abrogated. Yet it was not necessarily the influx of new laws, but rather the interpretation of law according to the maxims of
völkisch
(racist) thinking, adapted to the needs of
Volksgemeinschaft
(the people’s community) and to “
völkisch
natural law,” that made the difference—even if we agree with Stolleis that, strictly speaking, there was no real doctrine or legal philosophy of National Socialism.

The history of lawmaking concerning the Jews
1
provides not only a striking example of a focal area of legal activity of this revolutionary system, but also an illustration of the typical process of a “revolution by gradual small steps.” The first anti-Jewish law (April 7, 1933), passed under the name “Law to Restore the Professional Civil Service,” introduced racial anti-Jewish discrimination into the legal system. Yet because it was not totally implemented (Jews who had served at the front during World War I were exempted from it), the change at first did not seem too radical. Then, even the progression of laws and regulations leading up to the Nuremberg Laws (September 1935)—such as the “Law against the Disproportionately High Number of Jews Attending High Schools”—did not necessarily create the impression of a total break with the
Rechtsstaat
. There were Jews who were ready to accept even the Nuremberg Laws as a limited kind of regression rather than a total collapse of the system. Then the number of anti-Jewish laws and measures increased rapidly, and discrimination and persecution became more and more blatant. Still, because this took place within the framework of the law, a framework whose whole character underwent a transformation, changes within specific sectors (such as the “Jewish problem”) could be conceived as normal. Even the harsh “Jewish laws” during the war could be considered “normal” by contemporaries, since the curtailing of rights and standard of living for the whole population became commonplace. The absurdity of this system became all the more apparent when the anti-Jewish lawmaking continued after October 1941, when Germany became practically free of Jews (
judenrein
). The law took an independent course, while its object—the Jews in this case—practically disappeared. This development turns any understanding of the concepts of ‘law’ and ‘justice’ on its head.

For any student of history, not only the history of law, three additional aspects of this history of “law under the swastika” need special attention.

First is the question of
singularity
and
historical approach
. Together with Stolleis, we may plead for the historization of National Socialism and its legal system, but not for the sake of relativization or apologetics. The question of “progress in legal history” in the era of National Socialism may provide us with an excellent test case. Social historians have been absorbed with the historization of National Socialist history at least since the
Historikerstreit
ten years ago.
2
Legal history makes no exception. Pointing to the Third Reich as a link in the development of social welfare, for example, has become a commonplace.
3
At the same time, it is obvious that attributing “modernization” to National Socialism is characteristic of the New Right in German historiography,
4
and therefore this approach should be dealt with very carefully. Thus, for example, Stolleis takes the party’s “25 points program” very seriously, considering point 19 about the introduction of a German common law and its interpretation as an “incentive . . . to construct a new picture of Roman Law.” In so doing he understands the “pressure of the
Zeitgeist
” or the political challenge presented by National Socialism as instrumental for the creation of “historiographical progress” or modern “scholarly response.” We must not misunderstand this as an acceptance of the argumentation of the New Right.

Second is the attitude toward the
opposition
to National Socialism (
Widerstand
). If the National Socialist system was totally evil, then all legal procedure practiced by the Third Reich against any kind of opposition must be considered automatically unjust and therefore illegal, starting with the death sentences against thousands of common citizens who merely made pejorative remarks about the regime, and ending with activists engaging in conscious and political opposition, like the men of July 20, 1944, or the student White Rose group in Munich in 1943. Stolleis refers to the latter: In a film produced in 1982 about the White Rose, the producers directed public attention to the fact that the death sentence proclaimed by the special People’s Court was still formally valid in Germany. The ensuing discussion revolved around
the question of whether sentences spoken within the framework of the then “valid law” should be accepted even today for that reason. Here we return to the basic question of whether it is right or even possible “to distinguish between ‘normal’ valid law from that [National Socialist] period, and ‘law’ that should be considered ‘nonlaw’ because it violated . . . natural law.” Stolleis warns that the “layman’s idea that legal norms . . . are invalid if they are felt to be unjust . . . is based on an unhistorical understanding of natural law.” The modern social historian must react to this with some suspicion: The fallacies of historism are only too well known today, and for a historian to accept “historical understanding” as a moral absolution is one of historism’s main fallacies. How far the fallacy and absurdity can go is demonstrated by another case: A Berlin court in 1955 still described an attempt against Hitler’s life in 1938 as “attempted murder . . . because a deliberate plan to take a man’s life was prepared”!
5
Thus the court essentially left the 1939 sentence of the Nazi People’s Court in force and rejected the elementary natural right to oppose a dictator, Hitler!