Read The Legend of Sheba: Rise of a Queen Online

The Legend of Sheba: Rise of a Queen 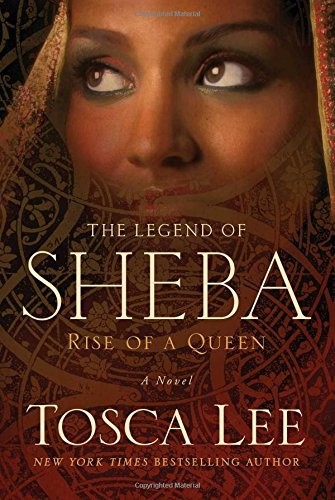 Thank you for downloading this Howard Books eBook.

Sign up for our newsletter and receive special offers, access to bonus content, and info on the latest new releases and other great eBooks from Howard Books and Simon & Schuster.

Praise for The Legend of Sheba

“Tosca Lee’s
The
Legend of Sheba
is a tale of lush prose, rich setting, and meticulously researched historic detail. The queen of Sheba may be a figure obscured by the millennia, but Tosca Lee brings her to life—and she is strong, capable, and irresistibly seductive.”

“I didn’t think I could admire a novel more than I admired
Iscariot
, but Tosca Lee has outdone herself with
The Legend of Sheba.
As luscious as the ancient Arabian kingdom and as fascinating as the queen who ruled it,
Sheba
captivates with beauty, depth, intelligence, and cunning storytelling skill.”

“
The Legend of Sheba
is an enthralling, impeccably researched novel full of wisdom that will appeal to both religious and secular audiences. The vivid beauty of Lee’s prose is unsurpassed. I felt as though Sheba herself was speaking to me, and her struggles and triumphs were my own.”

—Rebecca Kanner, author of
Sinners and the Sea

“The Legend of Sheba
is no fairy-tale romance of a woman swooning for a king. Tosca Lee has once again proven to be a fearless, dare I say, reckless storyteller as she gives us an unbridled retelling of a queen strong in wisdom and heart. It will leave you reflecting far beyond the turn of the last page.”

—Pam Hogeweide, author of
Unladylike: Resisting the Injustice of Inequality in the Church

“A wild camel ride through the desert full of twists, turns, and surprises . . . A luxurious royal feast of eloquence, imagery, and theme. It’s a beautiful story brilliantly told. Tosca Lee has the heart of a poet, the mind of a scholar, and the imagination of a storyteller.”

“As a meticulous researcher Lee consistently strives to make her stories not just believable but eye-popping with realism.
The
Legend of Sheba
leaves no novel stone unturned—action, intrigue, romance, and even mysticism make this a novel that must be read in a single sitting. The verbal tapestry of a minor biblical narrative will have readers examining the story of Sheba and Solomon in a completely new light.”

“If Cecil B. DeMille were still around, he’d want to make Tosca Lee’s
The Legend of Sheba
into a movie. It’s an epic masterpiece. A timeless tale that takes readers to heights of love and battle few have seen before. And, just like a favorite movie, you’ll want to experience the richness and depth of
Sheba
over and over again.” For those who rise up to the journey. 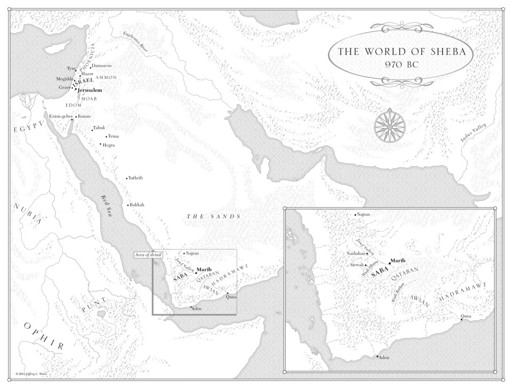 T
here is the tale that is told: A desert queen journeyed north with a caravan of riches to pay tribute to a king and his One God. The story of a queen conquered by a king before she returned to her own land laden with gifts.

That is the tale you are meant to believe.

Which means most of it is a lie.

The truth is far more than even the storytellers could conjure. The riches more priceless. The secrets more corrosive. The love and betrayal more passionate and devastating, both.

Love . . . The very word is a husk shriveled beneath the sun of the desert waste, its essence long lost to the sands. So will my tale be to those who traveled her barren routes, my footprints as though they never were. Nor will the mountains remember me or the waters of the Wadi Dhana speak of me as they swell the fertile floodplain. Far from the desert, the inexorable silt has its way in the end. It is a mercy.

Across the narrow sea, the pillars of the great temple once bore my name: Bilqis, Daughter of the Moon. Here, to the west, the palace columns bear another: Makeda, Woman of Fire. To those I served as priestess and unifier, I wore the name of my kingdom:
Saba. To the Israelites, I was queen of the spice lands they called Sheba.

They also called me whore.

The history keepers will no doubt tell their own tale, and the priests another. It is the men’s accounts that seem to survive a world obsessed with conquest, our actions beyond bedchamber and hearth remembered only when we leave their obscurity. And so we become infamous because we were not invisible, the truth of our lives ephemeral as incense.

It is harder for queens, who have no luxury of meekness. History does not know how to reconcile our ambition or our power when we are strong enough to survive it. The priests have no tolerance for those of us driven by the divine madness of questions. And so our stories are blackened from the fire of righteous indignation by those who envy our imagined fornications. We become temptresses, harlots, and heretics.

I have been all and none of these, depending who tells the tale.

Across the sea in Saba, the mountain rains have ceased by now, the waters of the mighty Dhana turned to steam on the fields at dawn. In a few months the northern traders will sail in the quest for incense and gold . . . bringing with them news of the king who sends them.

I have not spoken his name in years.

Yes, there is indeed a tale. But if you would have the truth from me, it begins with this:

I never meant to become queen.

M
y mother, Ismeni, was born under the glimmer of the Dog Star, when men become disoriented by its light. They said she enchanted my father, that he made her his consort with a clouded mind. No king would choose a wife from his own tribe when he could strengthen alliance with another.

But I saw the way their gazes followed her whenever she appeared in the palace porticoes, their conversations drifting to suspended silence until she passed from sight. On the rare occasion that she took her seat beside Father’s in the Hall of Judgment, the chamber swelled like a tide drawn by the darkened moon. Bronze-skinned with brows like dove’s wings and lips for whispering prayers, my mother was the most exquisite thing in all of Saba. The trickle of rain over the highland terraces couldn’t match the music of her beaded hems nor the best frankincense of Hadramawt compete with her perfume.

Drowsing on her sofa in the hot afternoon, I would twine my fingers with hers and admire the turquoise of her rings. I hoped my hands and feet would be as slender as hers. It was all I hoped; it never occurred to me that any other aspect of her beauty might be granted a mortal twice on this earth.