Read The Legend of the Blue Eyes Online

The Legend of the Blue Eyes 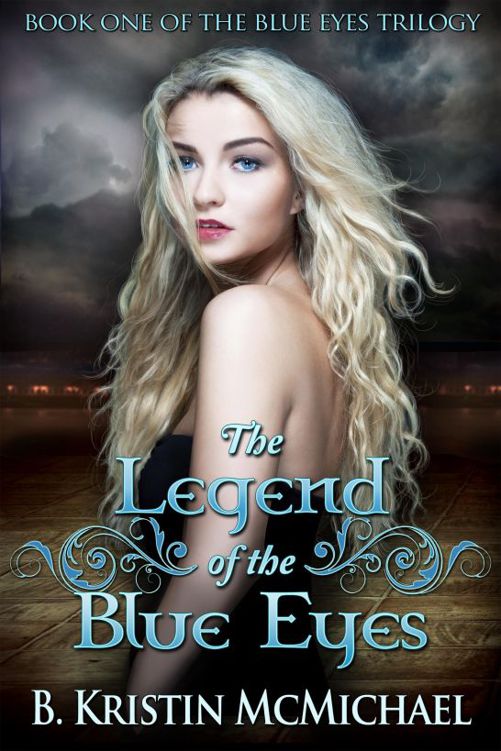 The Legend of the Blue
Eyes

By B. Kristin McMichael

The Legend of the Blue Eyes

Copyright © 2013 by B. Kristin McMichael

This book is licensed for your personal use
only. No part of this book may be reproduced in any form or by
electronic or mechanical means without written permission of the
author. All names, characters, and places are fiction and any
resemblance to persons real, living or dead, is entirely
coincidental.

Sixteen is an age of
freedom, when you finally get to drive a car.

Sixteen was the age my life
changed and chained me to a fate I did not know
existed.—Ari

“Auntie, I’m leaving now,” Arianna called
into the busy diner kitchen from the stairwell. Her dark blonde
ponytail bobbed up and down as she jumped back onto the next step
to avoid a passing worker. The short, black-haired woman in the
middle of the mob of people, dirty pans, and food only nodded. To
avoid the early dinner crowd, Arianna hurried out the back door of
the diner into the alley. It was Friday, the one day of the week
Arianna Grace did not help with the diner run by her guardians,
Aunt Lilly and Uncle Dean.

“Don’t forget to come straight home. We need
to leave tonight at midnight to catch our plane,” a large man
yelled from behind her. Arianna briefly nodded and waved to her
uncle as she turned the corner.

Arianna ran to the nearby bus stop and
ducked into the bus stop shelter to escape the light rain.
Raindrops accumulated on the plastic enclosure and trickled to the
ground as she waited. Across the street, an old man shuffling along
with his small, black dog waved to her as he continued to be led by
a much younger dog. Every Friday, Arianna took the same bus to meet
with her friends at the movie theater. As the rain picked up,
Arianna rushed from the bus shelter, and darted through the open
door of the waiting bus.

“Hi, Fred,” Arianna said to Robert, the
portly bus driver, as she swiped her pass.

“Five o’clock movie, Ethel?” he replied with
a wink.

“Is there any better time?” she responded as
she passed the normal riders: the dark-haired, tall girl always
dressed in ripped, purple fishnet stockings that matched the streak
in her hair; the clean-shaven, young, bald businessman wearing a
suit and tie; the older, gray-haired couple who shopped each Friday
near the theater; the two twenty-something boys she always assumed
were brothers that went to the gym to play basketball; and the cute
blond-haired, blue-eyed boy from her math class that always sat in
the back corner. Just like Arianna, they all rode the five o’clock
bus to the parking lot next to the theater.

“It’s Mary Ellen’s choice,” Arianna
answered, sitting behind him. “So, I’m guessing it will be that new
teen romance. I dunno the name.”

“Something Roses, I think,” he replied,
putting his business papers away at her arrival.

“It’s my choice next week,” Arianna replied.
“I’ll make sure to pick something bloody, with a lot of action to
make up for this week.” The man smiled and chuckled. To the outside
world, Arianna was just a shy fifteen-year-old, but around her
friends, she was her normal, bubbly self.

As they neared the parking lot, Arianna
walked to the front of the bus. “Fred, can you let me off by the
theater before you turn?” The driver nodded as the rain poured down
faster. He checked each of her hands. “No umbrella. I didn’t know
it was supposed to rain,” she explained.

“Have fun, kiddo,” he replied as he stopped
the bus as near to the door as he could get. “Keep dry.” Arianna
smiled and waved as she ran from the bus to the theater door. The
driver smiled back as he pulled from the curb. Everyone on the bus
knew life hadn’t been easy for Arianna, but despite everything she
was always cheerful and friendly.

Arianna hurried through the door and out of
the rain. She scanned the lobby, but her friends hadn’t arrived
yet. As she had each time since she started Friday night movies
with her two best friends, Arianna went to the concession stand and
ordered her usual large popcorn and small drink. As he had each
week for the past six months, the teenager behind the counter
filled the empty popcorn bowl that was sitting alone near the
drinks instead of one from the stack near the popcorn. Arianna
nodded her head in thanks as she took the bowl and carefully swiped
her hand beneath the cardboard edge. She cautiously pulled the note
from the bowl and slipped it into her sleeve.

Arianna sat down in the
lobby and waited for her friends. She was eager to read the note,
but she had to be careful. The writer had warned her if anyone
found out about the notes they had been exchanging, she would get
into trouble. It had been over six months now since she received
the first one. In the beginning, she thought it was a prank done by
her friends, but both Mary Ellen and Tish had no idea what she was
talking about
therefore she didn’t respond
to the notes. It was obvious the person knew who she was, but not
knowing who the writer was, Arianna had only glanced at the early
messages. It wasn’t until the person told her that they knew her
mother and father that Arianna began to seriously read each one.
She had only a very faint memory of her father, who died when she
was four, and none of her mother, who died the day she was born. No
one, including her aunt and uncle, would talk about either of her
parents. Arianna didn’t even know if her guardians were siblings of
her mother or father. They were the only family she had ever met,
and neither talked about their families or her parents. The
complete silence about her past, and lack of any family, often
disappointed Arianna as a child. Though she never felt sorry for
herself, she couldn’t help but be interested in notes from someone
who claimed to know her parents.

Her return notes began with little questions
Arianna had always hoped someone would answer. What color were my
father’s eyes? What color was my mother’s hair? Was she pretty?
Each week, she got answers to her questions: blue like yours; dark
brown; extremely. And again she would think of more questions. Last
week she finally got the courage to ask the writer to meet her in
person. Arianna knew the dangers of meeting a complete stranger,
but she had so many questions that remained unanswered and the
note-writer had all of the information she could want. There was
nothing she had thought yet that he or she could not answer.

Arianna tapped on the full popcorn bowl as
she waited for her friends. She scanned the room as always,
studying each person. Could the middle-aged man in the corner with
the blue button-down shirt be the writer? Or was it the flamboyant
woman with bright red lipstick bending over the concession counter,
trying to get free food? Arianna studied each person as she waited,
but she had yet to see the same person twice at the theater. Not
even the teenager behind the concession counter was the same.

“Hey, earth to Ari,” Mary Ellen said as she
tapped Arianna’s head. “You were supposed to wait for us outside
the theater,” she reminded her friend. “We were going to pay for
you this week for your birthday.”

Arianna shrugged as she stopped searching
the room. “But it isn’t my birthday yet.”

“Only forty-eight hours and you’ll be
sixteen. Do you feel any older?” Mary Ellen teased.

“You leave tonight then?” Tish asked,
sitting next to her friend.

“Yeah. They still haven’t told me where
we’re going. They said it’s a surprise,” Arianna complained. It
wasn’t that she disliked being surprised, but from the way her aunt
and uncle were acting, they were purposely hiding something from
her. Arianna hated secrets, and this was a secret, not a
surprise.

“Well, you’re still just a
child,” Mary Ellen replied, patting her shorter friend’s head.
“Children don’t need the details.” Mary Ellen grinned, trying to
make light of the situation.
Everyone
always assumed Arianna was years younger than her friends due to
her height.

“You should talk. You’re only two weeks
older than me. I may be shorter, but at least I look older than
you,” Arianna responded, tugging her friend’s dark brown braid.
“The worst of this whole trip is the dress Aunt Lilly bought. It’s
pink and shiny and has lots of lace. She said I needed to have a
formal dress. I thought she meant something you would wear to prom
or homecoming, but instead she brought home this very ugly dress.
I’ve no idea where she plans to make me wear it, but when I finally
get my hands on it, I’ll have fix it as much as I can. It really
seems quite hopeless right now.”

“The lace should be easy to get rid of, but
you can’t change the color or fabric so easily,” Tish replied,
knowing her friend hated light pink. Arianna had spent years being
referred to as a little kid by everyone, including strangers, due
to her petite frame; pink didn’t help the situation any. Even
though Arianna looked young, she wanted to be treated just the same
as everyone else her age.

Arianna stood to follow her friends, but
quickly changed her mind.

“Here,” she said, handing her drink and
popcorn to Tish. “I’ll be right back.” Normally Arianna waited
until after the movie to read the note, but she was too anxious
today.

Heading to the bathroom, Arianna ran into
the nearest empty stall. She pulled the delicate paper from her
sleeve. She carefully opened the note and memorized it.

Meet me at nine o’clock, behind the diner.
Offer to take out the trash, and make sure to wait out of view of
the back door. Don’t wear anything electronic, or any jewelry, or
they will track you.

PS: When you pack your bags for your trip,
take anything of value with you.

Arianna threw the note into the toilet and
flushed it away. Early on, the writer had informed her that her
movements were monitored by an unnamed person. She had always
wondered why her aunt would buy her such an expensive cell phone
when they didn’t have a lot of money until she found it had GPS
tracking in it. The person writing the notes was correct. Aunt
Lilly could be overprotective, but Arianna had never given her a
reason to be. The only thing that made sense was that it had to do
with the past that both her aunt and uncle refused to talk about.
Hopefully her mysterious correspondent would answer the questions
Aunt Lilly would not.