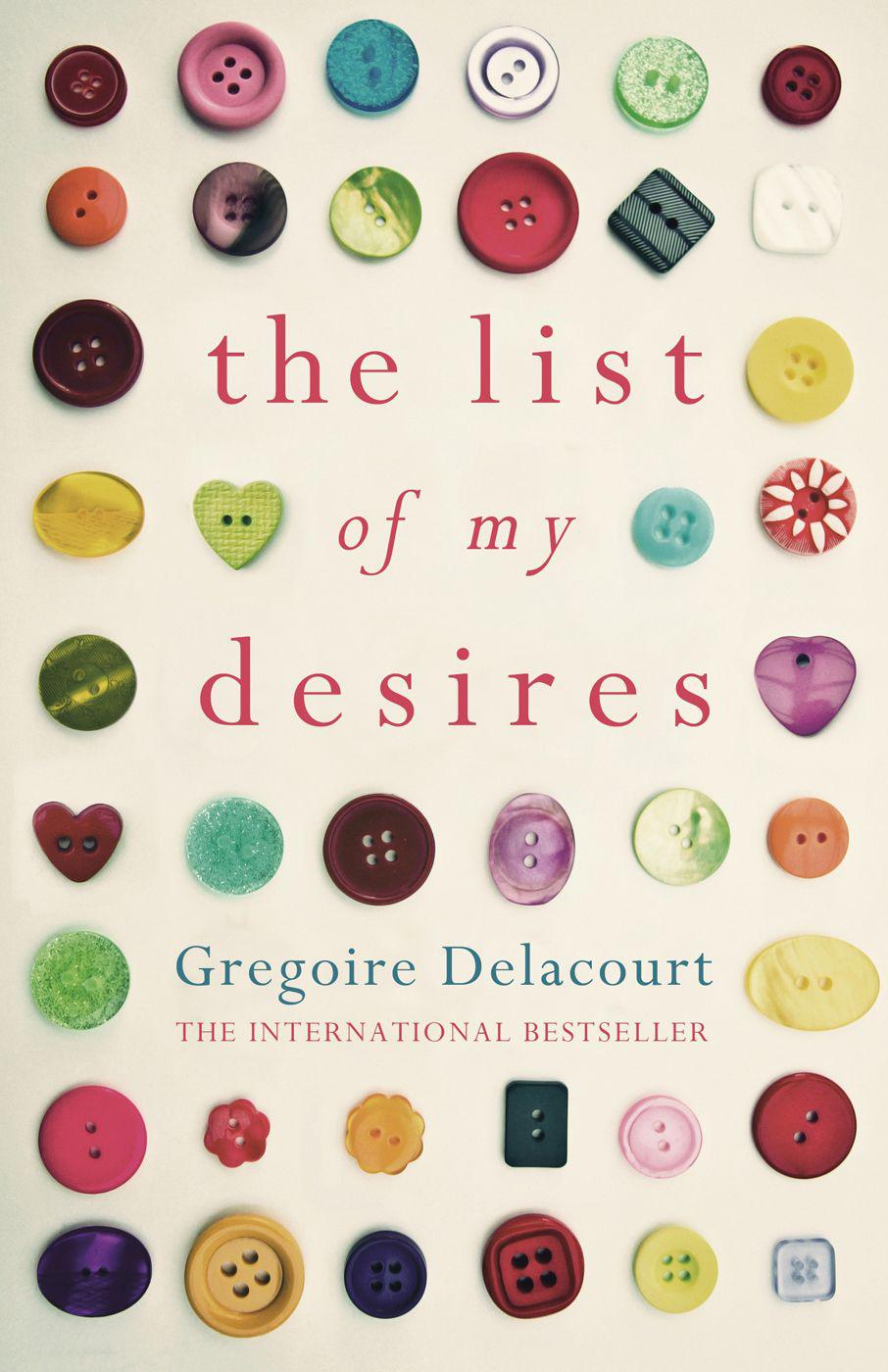 For the girl sitting on the car;
yes, she was there.

A Note from Grégoire Delacourt on
The List of my Desires

For instance, I know I’m not pretty. I don’t have blue eyes, the kind in which men gaze at their own reflection, eyes in which they want to drown so that I’ll dive in to rescue them. I don’t have the figure of a model, I’m more the cuddly sort – well . . . plump. The sort who takes up a seat and a half. A man of medium height won’t be able to get his arms all the way round me. I don’t move with the grace of a woman to whom men whisper sweet nothings, punctuated by sighs . . . no, not me. I get brief, forthright comments. The bare bones of desire, nothing to embellish them, no comfortable padding.

I know all that.

All the same, when Jo isn’t home I sometimes go up to our bedroom and stand in front of the long mirror in our wardrobe – I must remind Jo to fix it to the wall before it squashes me flat one of these days while I’m in the midst of my
contemplation
.

Then I close my eyes and I undress, gently, the way no one has ever undressed me. I always feel a little cold; I shiver. When I’m entirely naked, I wait a little while before opening my eyes. I enjoy that moment. My mind wanders. I dream. I imagine the beautiful paintings of languid bodies in the art books that used to lie around my parents’ house, and later I think of the more graphic bodies you see pictured in magazines.

Then I gently open my eyes, as if lifting the lids in slow motion.

I look at my body, my black eyes, my small breasts, my plump spare tyre, my forest of black hair, I think I look beautiful, and I swear that, in that moment, I really
am
beautiful, very beautiful even.

It makes me forget unpleasant things. The haberdashery shop, which is quite boring.

The chit-chat of Danièle and Françoise, the twins who run the Coiff’Esthétique hair salon next door to my shop, and their obsession with playing the lottery. My beauty makes me forget the things that always stay the same. Like an uneventful life. Like this dreary town, no airport, a grey place – there’s no escape from it and no one ever comes here, no heart-throb, no white knight on his white horse.

Arras. Population 42,000, 4 hypermarkets, 11 supermarkets, 4 fast-food outlets, a few medieval streets, a plaque in the Rue du Miroir-de-Venise telling passers-by and anyone who may have forgotten that Eugène-François Vidocq, an early private eye, was born here on 24 July 1775. And then there’s my haberdashery shop.

Naked and beautiful in front of the mirror, I feel as if I’d only have to beat my arms in the air and I could fly away, light and graceful. As if my body might join the bodies in the art books lying about my childhood home. And then it would be as beautiful as them. Definitely.

But I never dare try.

The sound of Jo downstairs always takes me by surprise. It tears the silk of my dream. I get dressed again double quick. Shadows cover the clarity of my skin. I know about the wonderful beauty beneath my clothes, but Jo never sees it.

He did once tell me I was beautiful. That was over twenty years ago, when I was little more than twenty. I was wearing a pretty blue dress with a gilt belt, a fake touch of Dior about it; he wanted to sleep with me. He complimented me on my nice clothes.

So you see, we always tell ourselves lies.

Because love would never stand up to the truth.

J
o is Jocelyn. My husband for the last twenty-one years.

He looks like Venantino Venantini, the handsome actor who played Mickey with the stammer in
The Sucker
and Pascal the hitman in
Crooks in Clover
. A firm jaw, piercing eyes, an Italian accent that would have you fainting with pleasure, suntanned skin, dulcet tones that would give a girl goosebumps, except that my own Jocelyno Jocelyni weighs ten kilos more than the film star and has an accent that’s a long way from turning a girl’s head.

He’s been working for Häagen-Dazs since they opened their factory here in 1990. He earns two thousand four hundred euros a month. He dreams of a flat-screen TV instead of our old Radiola set. And a Porsche Cayenne. And a nice fireplace in the living room. A complete set of James Bond films on DVD. A Seiko watch. And a younger, prettier wife, but he doesn’t tell me that bit.

We have two children. Well, three, in fact. A boy, a girl and a corpse.

Romain was conceived on the evening when Jo told me I was beautiful, and on account of that lie I lost my head, my clothes and my virginity. There was one chance in thousands that I’d fall pregnant the very first time, and it happened to me. Nadine arrived two years later, and after that I never returned to my ideal weight. I stayed large, a sort of empty pregnant woman, a balloon full of nothing.

Jo stopped thinking I was beautiful, he stopped touching me. He hung out in front of the Radiola in the evenings, while eating the ice cream they gave him at the factory and drinking Export 33 beers. And I got into the habit of falling asleep on my own.

One night he woke me. He had a hard-on. He was drunk, and he was crying. So I took him inside me, and that night Nadège made her way into my belly and drowned in my flesh and my sorrow. When she came out eight months later she was blue. Her heart was silent. But she had beautiful fingernails and long, long eyelashes, and although I never saw the colour of her eyes, I’m sure she was pretty.

On the day of Nadège’s birth, which was also the day of her death, Jo laid off the beers. He broke things in our kitchen. He shouted. He said life was lousy, life was shit, fucking shit. He hit his chest, his forehead, his heart, the walls. He said life was too short. It wasn’t fair. You want to rescue what you can from all the shit because time is not on your side. My baby, he added, meaning Nadège, my little girl, where are you? Where are you, poppet? Romain and Nadine were scared and went to their room, and that evening Jo began dreaming of the nice things that would make life sweeter and blunt the pain. A flat-screen TV. A Porsche Cayenne. James Bond. And a pretty woman. He was sad.

And it happened to me.

I
took over the haberdashery shop the year I married Jo.

I’d already been working there for two years when the owner swallowed a button as she was biting it to make sure it was genuine ivory. The button went down the wrong way, it slipped over her moist tongue, got into her laryngopharynx, hit a cricothyroid ligament and stuck in her aorta, so Madame Pillard didn’t hear herself choking to death, and I didn’t hear her either, because the button stifled any sound.

It was the noise of her fall that alerted me.

As her body collapsed, it brought down the button boxes with it, eight thousand buttons rolling round the little shop, and the first thing that occurred to me when I saw the scene of devastation was: how many days and nights would I be spending down on all fours, sorting out those eight thousand buttons? Fancy buttons, metal buttons, wooden buttons, buttons for children’s clothes, fashionable buttons.

Madame Pillard’s adopted son came from Marseille for the funeral, suggested I might like to take over the shop, the bank agreed and on 12 March 1990 an artistic sign painter came to inscribe the words
Jo’s Haberdashery, formerly Maison Pillard
above the display window and on the door of the little shop. Jo was proud.
Jo’s Haberdashery
, he said, puffing himself up like a man whose chest is covered with medals, I’m Jo, that’s my name!

I looked at him, and I thought how handsome he was, and I decided I was lucky to have him for a husband.

That first year of our marriage was brilliant. The haberdashery shop. Jo’s new job at the factory. And waiting for the birth of Romain.

But so far the haberdashery shop has not done very well. I have to compete with 4 hypermarkets, 11 supermarkets, the sinfully low prices of the dressmaking stall at the Saturday market, the economic crisis making people scared and mean and the laziness of the ladies of Arras, who prefer the ease of ready-to-wear to the creativity of making your own clothes.