Read The Lives of Rocks Online

The Lives of Rocks 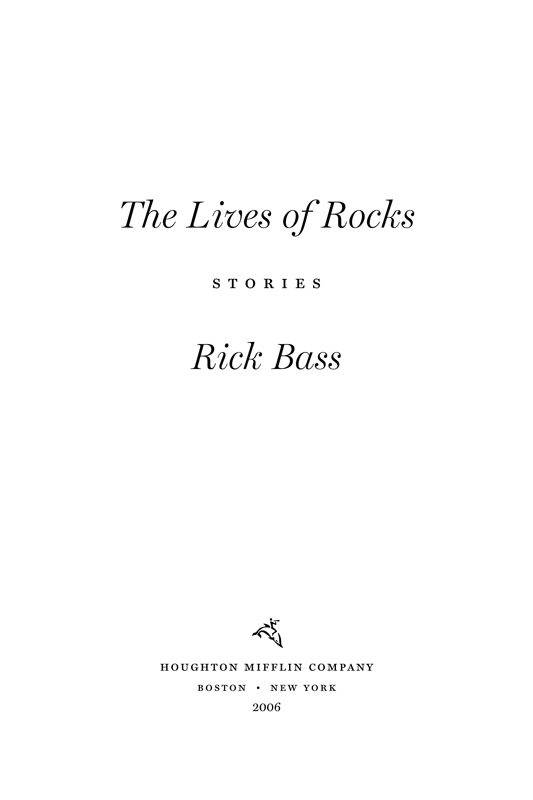 The Lives of Rocks

These stories are based on the imagination, and the characters in
them do not represent any persons known to me, living or not.

For Elizabeth, Mary Katherine, and Lowry,
and for Larry Brown

I'm grateful to numerous editors for their help with these stories: as ever, my editor at Houghton Mifflin, Harry Foster, as well as Alison Kerr Miller and Reem Abu-Libdeh. I'm grateful also to editors who worked with these stories in earlier formsâGeorge Plimpton, who is sorely missed, and the staff of the
Paris Review;
Michael Ray; Gordon Lish; Lois Rosenthal; and Rod Smith; and to the editors and staff of the
Seattle Review, Idaho Review, Mississippi Review,
and the
Southern Review,
as well. I'm grateful to Lynn Sainsbury; to my father for use of his old geology notes and texts; to my agent, Bob Dattila; to Russell Chatham for the beautiful painting on the cover; to the book's designer, Robert Overholtzer; to my typist, Angi Young; and to my family. I wish also to acknowledge the support and long friendship of the writer Larry Brown.

There once were two boys, best friends, who loved the same girl, and, in a less common variation on that ancient story, she chose neither of them but went on to meet and choose a third, and lived happily ever after.

One of the boys, Richard, nearly gambled his life on herâpoured everything he had into the pursuit of her, Annieâwhile the other boy, Kirby, was attracted to her, intrigued by her, but not to the point where he would risk his life, or his heart, or anything else. It could have been said at the time that all three of them were fools, though no one who observed their strange courtship thought so, or said so; and even now, thirty years later, with the three of them as adrift and asunder from one another as any scattering of dust or wind, there are surely no regrets, no notions of failure or success or what-if, though among the three of them it is perhaps Richard alone who sometimes considers the past and imagines how easily things might have been different. How
much labor went into the pursuit, and how close they, all three, passed to different worlds, different histories.

Richard and Kirby were seniors in high school while Annie was yet a junior, and as such they were able to get out of class easier than she wasâthey were both good studentsâand because Kirby had a car, an old Mercury with an engine like a locomotive's, he and Richard would sometimes spend their skip days traveling down to the coast, forty miles southeast of Houston, drawn by some force they neither understood nor questioned, traveling all the way to the water's lapping edge.

The boys traveled at night, too, always exploring, and on one of their trips they had found a rusting old crane half sunk near the estuary of the Sabine River, salt-bound, a derelict from gravel quarry days. They had climbed up into the crane (feeling like children playing in a sandbox) and found that they could manually unspool the loopy wire cable and with great effort crank it back in. (When they did so, the giant rusting gear teeth gave such a clacking roar that the night birds roosting down in the graystick spars of dead and dying trees on the other shore took flight, egrets and kingbirds and herons, the latter rising to fly long and slow and gangly across the moon; and as the flecks of rust chipped from each gear tooth during that groaning resurrection, the flakes drifted down toward the river in glittering red columns, fine as sand, orange wisps and strands of iron like magic dust being cast onto the river by the conjurings of some midnight sorcerer.)

With such power at their fingertips, there was no way not to exercise it. Richard climbed down from the crane and muck-waded out into the gray slime salt-rimmed shallowsâpoisoned frogs yelped and skittered from his approach, and the orange sky-dancing flames of the nearby refineries wavered and belched, as if noticing his approach and beckoning him closer, as if desiring to stoke their own ceaseless burning with his own bellyfire.

Richard grabbed the massive hook of the cable's end and hauled it back up to shore and fastened it to the undercarriage of Kirby's car, then raised his hand over his head and made a twirling motion.

Kirby began cranking, and the car began to ascend in a levitation, rising slowly, easily, vertical into the air. Loose coins, pencils, and Coke cans tumbled from the windows at first, but then all was silent save for the steady ratchet of slow gears cranking one at a time, and the boys howled with pleasure, and more birds lifted from their rookeries and flew off uneasily into the night.

It was only when the car was some twenty feet in the airâdangling, bobbing, and spinningâthat Richard thought to ask if the down gears worked, imagining what a long walk home it would be if they did notâand imagining, too, what the result might be if one of the old iron teeth failed, plummeting the Detroit beast into the mud below.

The gears held. Slowly, a foot at a time in its release, the crane let the car back down toward the road.

The boom would not pivotâhad long ago been petrified into its one position, arching out toward the river like some tired monument facing the direction of a long-ago, all-but-forgotten warâbut there were hundreds of feet of cable, so they were able to give each other rides in the rocket car now, one of them lifting it with the crane while the other gripped the steering wheel and held on for dear life, aiming straight for the moon and praying that the cable would hold.

They soon discovered that by twisting and jouncing around in the passenger seat they could induce the car to sway farther and even spin as it was raisedâthe Coriolis effect swirling below like an unseen, unmapped riverâand it took all of an evening (the spinning headlights on high beam, strafing the mercury green bilious cloudbank above, where refinery steam crept through the tops of the trees) to tire of that game (startled birds flying right past the sky-driver's windows, occasionally). They began hooking on to other objects, attaching the Great Claw of Hunger, as they called it, to anything substantial they could find: pulling from the sandbank half-submerged railroad ties, the old bumpers of junked cars, twisted steel scrap, rusting slag-heaped refrigerators, washers and dryers.

As if in a game of crude pinball or some remote-controlled claw clutch game at an arcade, they were able to lurch their attachments out into the center of the river; with a little practice, they learned how to disengage the hook in midair, which led to satisfying resultsâdropping junked cars into the river from forty feet up, landing them sometimes back on the road with a grinding clump of sparks, and other times in the river's center with a great whale plume of splash.

A sculpture soon appeared in the river's middle, a testament to machines that had been hard-used and burned out early, spring-busted not even halfway through the great century: the steel wheels of trains, cogs and pulleys, transmissions leaking rainbow sheens into the night water, iridescent sentences trailing slowly downstream in perhaps the same manner of the entrails that shamans once tossed to determine or sense world's flow and coming events. Within a few nights they had created an island in the slow current's middle, an island of steel and chrome that gathered the bask of
reptiles on the hot days, and into the eveningsâturtles, little alligators, snakes, and bullfrogs.

Nights were the best. There were still fireflies back then, along the Sabine, and the fireflies would cruise along the river and across the toxic fields, swirling around the angel-ascending car, the joy ride: and the riders, the journeyers, would imagine that they were astronauts, voyaging through the stars, cast out into some distant future.

In September the river was too low for barges to use, though when the rains of winter returned the river would rise quickly (flooding the banks and filling the cab of the crane), and the riverboat captains working at night would have to contend with the new obstacle of the junk slag island, not previously charted on their maps. They might or might not marvel at the origin or genesis of the structure, but would merely tug at the brims of their caps, note the obstacle in the logbook, and pass on, undreaming, laboring toward the lure of the ragged refineries, ferrying more oil and chemicals, hundreds of barrels of toxins sloshing quietly in the rusty steel drums stacked atop their barges, and never imagine that they were passing the fields of love...

Richard and Kirby bought an old diving bell in an army-navy surplus store for fifty dollarsâthey had to cut a new rubber gasket for the hatch's sealâand after that they were able to give each other crane rides into the poison river.

For each of them it was the same, whether lowering or being lowered: the crane's operator swinging the globe out over moonlit water the color of mercury, then lowering the globe, with his friend in it, into that netherworldâthe passenger possessing only a flashlight, which dimmed quickly upon submersion and then disappearedâthe globe tumbling with the current then and the passenger within not
knowing whether or not the cable was still attached, bumping and tumbling, spotlight probing the black depths thinly, with brief, bright glimpses of fish eyes, gold-rimmed and wild in fright, and the pale turning-away bellies of wallowing things flashing past, darting left and right to get out of the way of the tumbling iron ball of the bathysphere.

The cable stretching taut, then, and shuddering against the relentless current: swaying and shimmering in place but traveling no more.

Then the emergence, back up out of total darkness and into the night. The gas flares still flickering all around them. Why, again, was the rest of the world asleep? The boys took comfort in the knowledge that they would never sleep: never.

On their afternoon school-skip trips together, the three of them traveling to the Gulf Coast, they would wander the beaches barefoot, walking beneath the strand line, studying the Gulf as if yearning to travel still fartherâas if believing that, were they to catch it just right, the tide might one day pull back so far as to reveal the entire buried slope, wholly new territoryâthough this was not a clamant yearning, for already so much else was just as new. It was more like a consideration.

Beyond the smokestack flares of the refineries, out on a windy jetty, there was an abandoned lighthouse, its base barnacle-encrusted, that they enjoyed ascending on some such trips, and once up into the glassed-in cupola, they would drink hot chocolate from a thermos they had brought, sharing the one cup, and would play the board game Risk, to which they were addicted.

Only Kirby seemed immune, his own internal light cool and blue.

Addie on the Inside by James Howe
Lookin' For Luv by Weber, Carl
Whippoorwill by Sala, Sharon
Out of Oz: The Final Volume in the Wicked Years by Gregory Maguire
I Hated to Do It: Stories of a Life by Donald C. Farber
Beautiful City of the Dead by Leander Watts
Rock Bottom by Canosa, Jamie
Beloved Beast by Greiman, Lois
Ithaca by David Davidar
Borrowed Time by Jack Campbell
Our partner